Matthew Heimbach, head of the white nationalist and anti-Semitic Traditionalist Worker’s Party, has always been a movement gadfly. Neo-Nazis, racist skinheads, Klansmen –– there hasn’t been a racist or nationalist group with which he will not ally –– no matter what. But a fixture at Hammerfest?

Hardly a storm trooper of the movement, he and some fellow party members recently traveled from Indiana to Georgia to address Hammerfest 2016, the boozy annual gathering of the Hammerskin Nation, the oldest and perhaps most violent neo-Nazi skinhead crew.

In recapping the event earlier this week, TWP lauded the Hammerskins, claiming their “loyalty and sacrifice” stands as “an example for all Nationalists.” “Everyone stood as brothers and sisters in a shared experience of fellowship and unity,” TWP said in a teaser for its podcast,, “The Daily Traditionalist.” 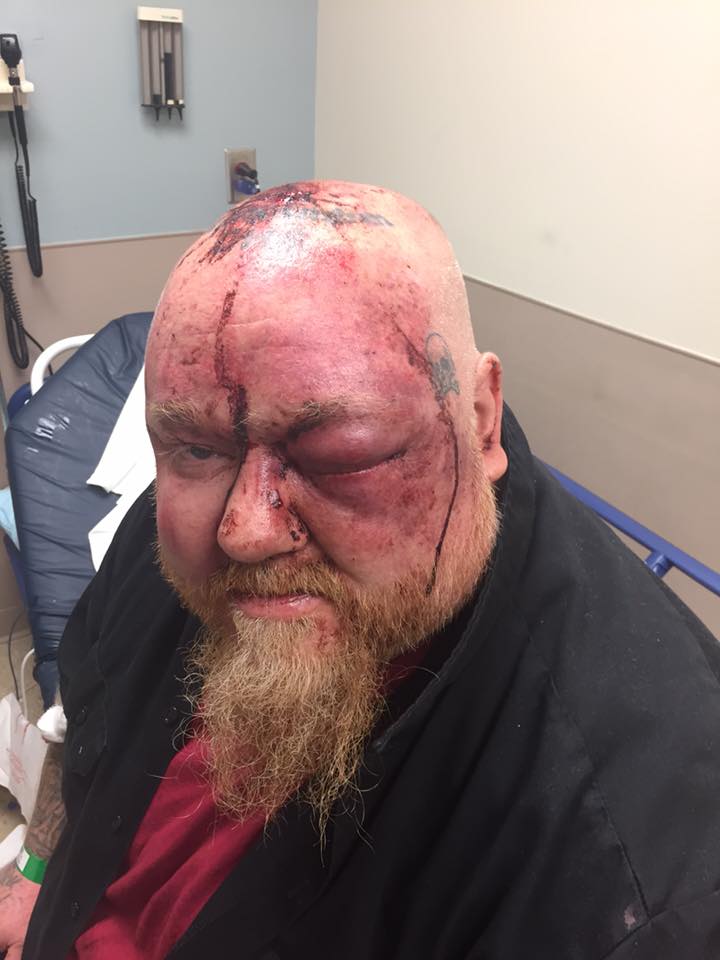 Fellowship and unity? Perhaps Heimbach should talk to Dave Nichols.

In a series of Facebook posts about the weekend, Nichols alleges that six Hammerskins cornered and attacked him at the event. “I was a confederate hammerskin [sic] for 17 years before I retired,” Nichols fumed on Facebook. “You cowards did that shit in front of my old lady and one of my sons.”

The beating didn’t make headlines, and it certainly wasn’t out of place for Hammerfest. In fact, there have been much more high-profile instances of Hammerskin violence than quiet weekends of “faith, family and folk,” as Heimbach likes to profess.

In fact, as Heimbach loaded up for the road-trip down to Temple, Ga., where Hammerfest was being held on Patrick Lanzo’s land and at his Klan-affiliated Georgia Peach Bar, he cannot reasonably claim he was unaware of Wade Michael Page.

Page, a patched member of the Hammerskin Nation, made national headlines four years ago after his shooting rampage at a Sikh temple in Oak Creek, Wis. Armed with a semi-automatic .9 mm pistol, Page murdered six before firing almost 15 shots into a police officer tending to a victim outside.

And what about Ryan Elliott Giroux? The former Hammerskin is currently facing life in prison after confessing to 23 felony charges, including murder, attempted murder, and assault. Giroux’s charges stem from a 30-minute shooting rampage through downtown Mesa, Ariz., that left one dead and five others suffering gunshot injuries.

Heimbach surely cannot plead ignorance to the violent reputation of the Hammerskin Nation, not with that history blistered with such violence.

Perhaps its no surprise that Heimbach chose to whitewash the Hammerskins. He is clearly not keen on physical confrontations, unless one counts shoving women from behind.

Such aversion was never clearer than in June, when he failed to attend a contentious TWP rally in Sacramento, Calif., that turned into a bloody skirmish with anti-fascist protestors.

In the run up to that rally, TWP volleyed insults and provocations with leftist and anti-fascist protestors over social media. TWP issued memes and party graphics that billed their hatred of the “Antifa” above its own tag-line.

His absence suggests, perhaps, that Heimbach could have recognized a serious fight might be awaiting him out in Sacramento, nearly 2,300 miles away from his home in Indiana. He traveled to Ohio instead, in the exact opposite direction of California.

And while his party members were caught in a riot, Heimbach was attending a “secret” meeting of the Aryan Nationalist Alliance, where he gave yet another speech. There, he partook in fellowship with pariahs of the racist skinhead movement like Josh Steever, who leads the crew Aryan Strikeforce.

Heimbach has since officially united TWP under that alliance’s banner with the likes of Steever’s horde, a group reviled by many other crews with which Heimbach aligns himself. Their opinion on Steever is unknown, but one of those crews is the Golden State Skinheads who primarily composed the TWP party members that Heimbach decided not to stand alongside in Sacramento.

As so many self-styled leaders of the white power movement before him, Heimbach is clearly locked in a “bring-the-boots-to-the-suits” moment of recruiting. Already connected to other violent racist outfits, such as the Vinlanders Social Club and Keystone United, Heimbach wants to be a major player, one one who likely desires what past movement leaders have desired: to appear intimidating by association, rather than in action or character.

And Matthew Heimbach would not be the first self-styled player, figurehead or skinhead, who attempted to rally those boots to his cause only to later find them turned on himself. Just look at Dave Nichols.