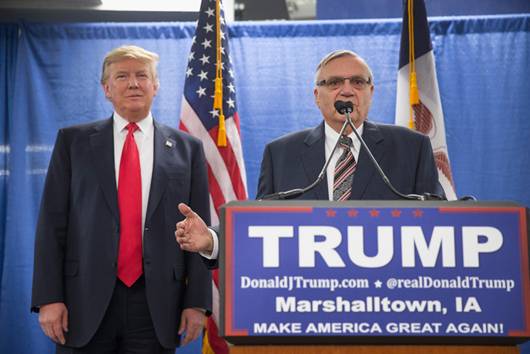 The 84-year-old sheriff of Maricopa County — a leading Donald Trump supporter — was charged last week in U.S. District Court in Arizona with criminal contempt-of-court for ignoring a federal judge's order in a long-simmering racial-profiling case.

The charging document accuses the sheriff of willfully disobeying a federal judge’s order by using racial profiling to arrest suspected illegal immigrants. The controversial practice — involving a posse of armed, civilian volunteers —made Arpaio a folk-hero in some far-right, nativist circles.

Arpaio, who calls himself America’s toughest sheriff, refused to talk in detail about the pending case during an interview published in The Washington Post.  He would only tell the newspaper, “We made a couple mistakes. I’ve got good lawyers now.”

Arpaio could face up to six months in jail if convicted, but a conviction wouldn’t bar him from continuing to serve as sheriff is he’s re-elected on Nov. 8.

The Arizona sheriff told the Post that he is a “victim of an active and ongoing ‘conspiracy’ by the Obama administration and the mainstream media to undermine him and his friend Donald Trump.”

The two were leading proponents of the now-debunked “birther” conspiracy theory that Barack Obama wasn’t born in the United States and therefore couldn’t legally hold the highest office in the land. They also share an almost-paranoid fear of undocumented immigrants. At Trump’s invitation, Arpaio was a featured speaker at this summer’s Republican convention.

Meanwhile, Arpaio has raised $12 million in his re-election fight against Paul Penzone, a former sergeant in the Phoenix Police Department. When the two squared off in the 2012 sheriff’s race, Arpaio won by 6 points. But now an Arizona Republic poll shows Arpaio trailing Penzone by 15 points.

The likelihood that Arpaio could face criminal prosecution for his department’s alleged racial profiling police stops “became increasingly inevitable after a prolonged series of hearings last year,” the Arizona Republic reported this week.

In May, a federal judge found Arpaio in civil contempt. On Oct. 11, the U.S. Department of Justice announced that its prosecutors would submit an order to elevate that to a criminal contempt order which District Court Judge Susan Bolton signed on Tuesday.

The order details Arpaio’s refusal over the past five years to follow court orders from other federal judges pertaining to racial profiling to stop and arrest suspected undocumented immigrants.

The Arizona sheriff, the order alleges, has been “more interested in maintaining his famed tough-on-immigration persona than following [the judge’s] orders.”