*Editor's note: In December 2016, a suspect, a member of the church, was arrested in connection with the crime, and authorities now believe the attack was not politically motivated.

Fire fighters arrived to find Hopewell Missionary Baptist Church “heavily engulfed in flames” with the words “Vote Trump” spray-painted on the side of the building, according to Mayor Errick Simmons, who spoke at a press conference Wednesday morning. 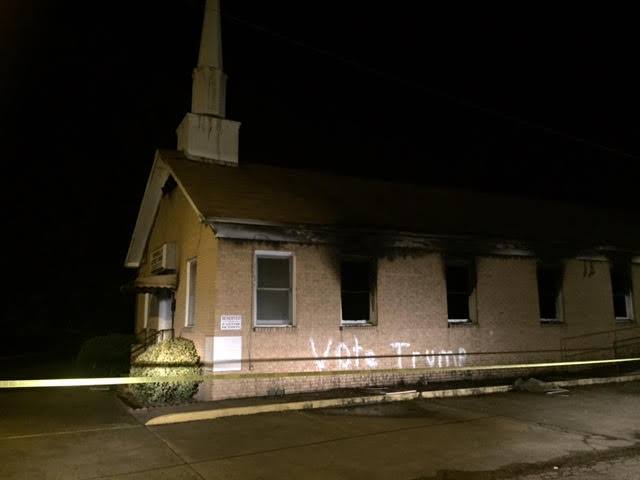 Simmons said that Tuesday’s fire is being investigated as a hate crime.

The city’s investigation is taking into account the nation’s history of attacks on black churches, according to Greenville Police Chief Delano Wilson, including those as recent as last year, when six Southern churches were damaged or destroyed.

“This kind of attack happened in the 1950s, and 1960s, but it shouldn’t happen in 2016,” Simmons said. “Last night’s attack appears to be a race crime: the church has always been a symbol of the black community and a place for communication around civil rights, the same rights black communities were deprived.”

The fire comes just months after the word “n-----” was spray-painted onto the Greenville boat ramp, near the location of a regular interracial worship initiative.

“We feel the [spray painted] quote was an intimidation of congregants’ right to vote,” Wilson said. “This is a predominately black church: that would definitely be a hate crime.”

Hopewell Missionary Baptist Church has been in the same spot for 111 years, according to Carolyn Hudson, one of the church’s pastors. It is one of many historically black churches in Greenville, a city of 34,000  in the majority black region of the Mississippi Delta.

In the days leading up to the election, the city of Greenville will be placing additional patrols around all places of worship, Simmons announced.

“I see the attack as a strategy to put folks in fear,” said Simmons. “But we’re resilient people in Greenville.”