A Southern Poverty Law Center analysis of extremist activity on Twitter related to the 2016 election found that Republican nominee Donald Trump’s allegations of a “rigged election” led to extreme growth in #DrainTheSwamp, which trended for two days.

The hashtag, which refers to alleged widespread corruption among elected officials in Washington, D.C., climbed as details came to light from emails stolen from John Podesta, chairman of Hillary Clinton’s presidential campaignreleased on WikiLeaks.

Usage of #DrainTheSwamp spiked on Oct. 16 after Trump told his Twitter followers that the election is “absolutely rigged,” and again five days later when Trump reiterated the point in Pennsylvania, saying, “It’s a rigged system.”

Less than a month away from the presidential election, #DrainTheSwamp rose to prominence with alarming speed, primarily via retweets. About 76 percent of the 41,885 tweets that featured #DrainTheSwamp were unoriginal content.

Previous SPLC analysis showed a similar trend that a small but vocal minority was driving #Hillaryshealth – the most frequently used hashtag selected for this study.

Similar to #HillarysHealth, the conversation around #DrainTheSwamp consisted mainly of a small body of original content propagated by a few core users which was then magnified through retweets. The top ten users of #DrainTheSwamp, for example, were responsible for 1.6 percent of its traffic. 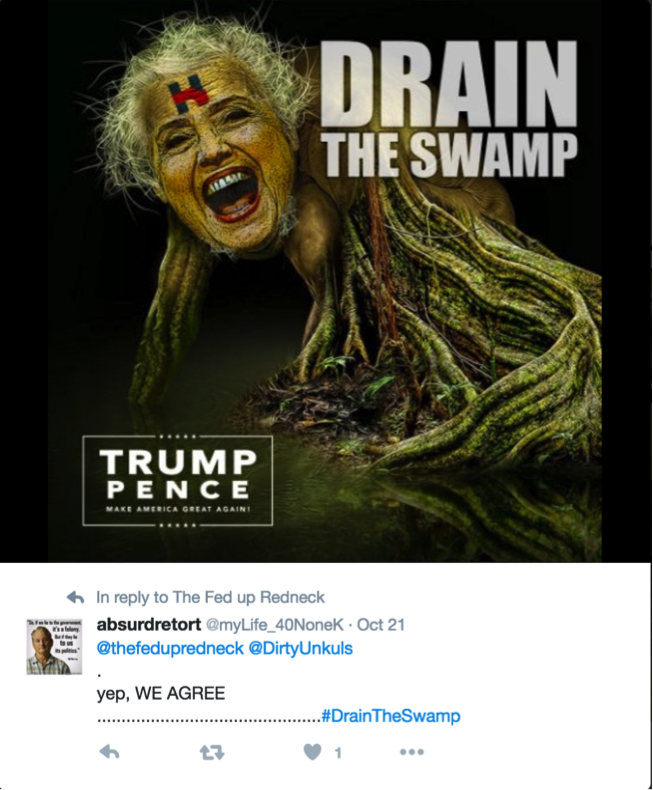 #DrainTheSwamp references the incorrect belief that the District of Columbia was built on a emptied swamp, a convenient ahistorical metaphor that has persisted in political commentary for years.

Of note, #DrainTheSwamp had little discernible activity prior to Oct. 16, 2016, when Trump tweeted “The election is absolutely being rigged by the dishonest and distorted media pushing Crooked Hillary – but also at many polling places – SAD.” 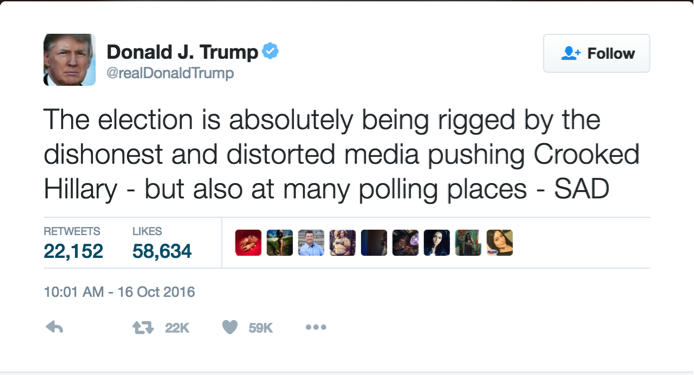 While the latter assertion regarding polling places is vague, the notion of a “rigged election” has resonated enough for the hashtag to rise in popularity, peaking first in the run-up to the third presidential debate in Las Vegas, and then declining through Oct. 21, when Trump reminded a packed rally in Pennsylvania that “it’s a rigged system”.

#DrainTheSwamp then soared to an apex, but has since declined.

The hashtags, users, and accounts most associated with #DrainTheSwamp have less obvious influence from the far right compared to other data analyzed.

Of the top ten #DrainTheSwamp users, only one, @waffen2112, featured overt racist or bigoted content. @Waffen2112’s bio includes “Slayer of Muslims and Marxists” and the user has tweeted photos of a hooded KKK “scarecrow” guarding a watermelon patch, as well as an image a goat mounting a Muslim man in prayer.

That is not to say that #DrainTheSwamp has not seen significant play among the radical and Alternative Right (Alt-Right). David Duke, Angelo John Gage, Paul Ray Ramsey and a user with the handle @JohnRiversToo all have a significant number of followers on the far right, and they tweeted or retweeted #DrainTheSwamp along with other memes and buzzwords amplified by the Trump campaign’s rhetoric. 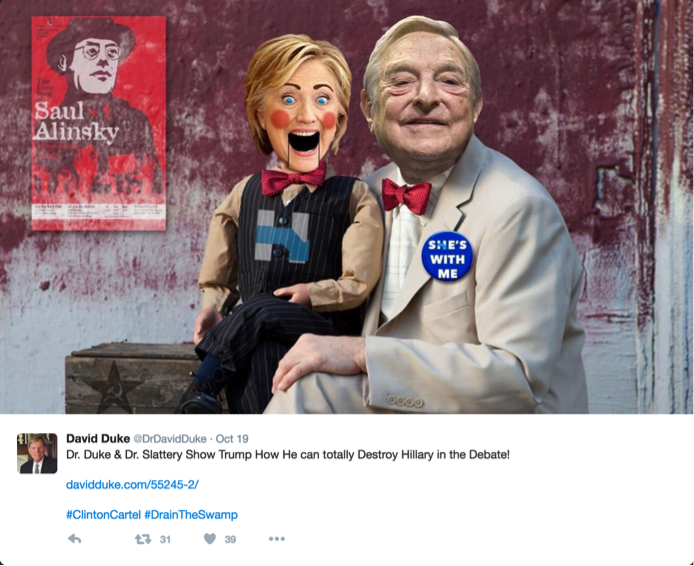 None of the top ten hashtags associated with #DrainTheSwamp seem to stem directly from the far right, but rather fit within a consistent message seeking to cast Donald Trump as a foil to Hillary Clinton’s perceived cronyism and corruption.

#Gettysburg appears to be related to Trump’s speech on Oct. 22, which many are referring to as his “Gettysburg Address, ” riffing both on the location and the content of the speech. That hashtag began to pick up steam just as #DrainTheSwamp began its most recent decline.

This may represent that dissatisfaction with perceived corruption in government is not limited to right-wing conspiracy wonks on Infowars.com.

#DrainTheSwamp appears to be an Alt-Right messaging decision to use dissatisfaction with the political status-quo, burgeoning resentment against the “establishment,” and skepticism of the media as a wedge issue to bring undecided voters to their camp. 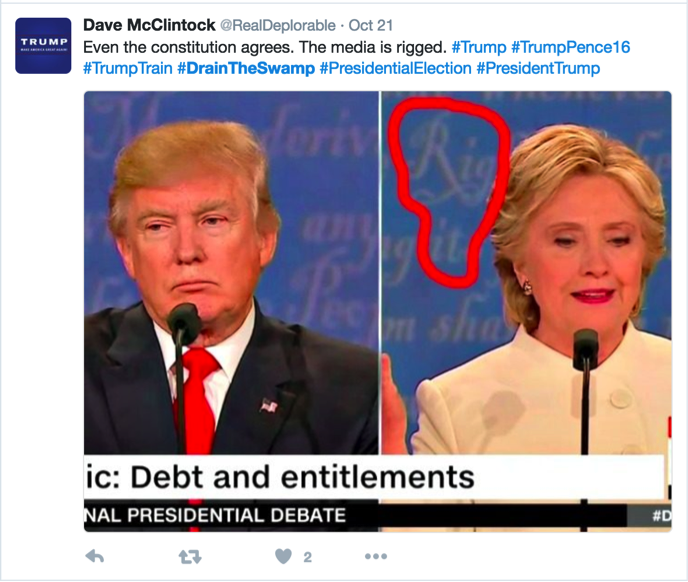 This is the second in an ongoing series analyzing Twitter hashtags during the latter quarter of the 2016 Presidential election.