Overnight, the radical right celebrated the election of Donald Trump whose campaign brought attention to their issues not seen in decades. Some even claimed that a white revolution had begun. 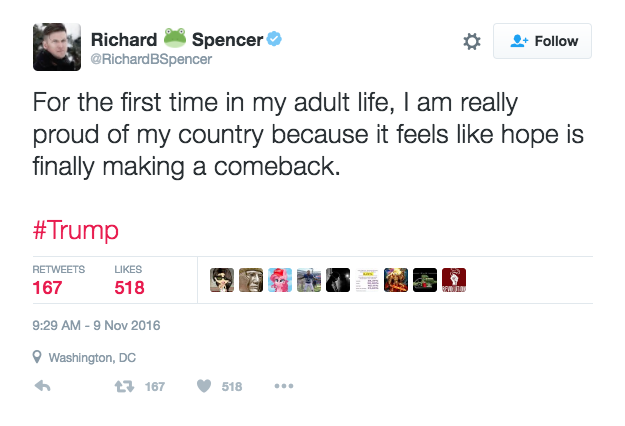 “Our Glorious Leader has ascended to God Emperor. Make no mistake about it: we did this. If it were not for us, it wouldn’t have been possible. ... [T]he White race is back in the game. And if we’re playing, no one can beat us. The winning is not going to stop.”

White nationalist Brad Griffin, who runs the website Occidental Dissent, also rejoiced, posting a clip from the movie American History X where a neo-Nazi sings “The White Man Marches On” to the tune of the “The Battle Hymn of the Republic.”

Griffin captioned the video with a message: “White Pride Worldwide! White Nationalists all over the world are celebrating like this on the way to work this morning!”

“White Pride Worldwide” is the motto of Stormfront, the internet’s first hate site. Its founder, Don Black, joined the chorus on his Stormfront Radio show and declared a new "independence day." While Black called it an “amazing night,” he warned that white nationalists need to forge ahead because “Trump has just given us breathing room.”

Black's former partner in crime, David Duke, took credit in part for Trump's win tweeting “make no mistake about it, our people played a HUGE role in electing Trump!” Later, he went on a series of tirades on his Facebook page seemingly aimed at the media and Clinton supporters:

You parasites should literally be beyond thankful Donald J. Trump defeated your rigged system - he pulled off the most amazing victory in this nation's history -> you should be celebrating, seriously.

Unlike what it could've been, had he loss - Trump actually has some weird type of compassion for you filth and will more than likely allow some of you to still operate -> much like Putin does in Russia - but guess what? You arrogant, unthankful, degenerate pieces of shit no longer have absolute power - appreciate the influence Trump allows you to have in this great nation, try and be thankful for once -> because I can assure you, things could be A LOT worse.

Duke, a former Grand Wizard of a Klan group and member of the Louisiana House of Representatives in the late 1980’s was also on the ballot last night, running for a Louisiana Senate seat.  Though Duke lost with only 3 percent of the vote, he called it “One of the most exciting nights of his life."

Outspoken anti-Semite and former professor Kevin MacDonald wrote on the Occidental Observer, “This is an amazing victory. Fundamentally, it is a victory of White people over the oligarchic, hostile elites,” and highlighted the demographics that won the election for Trump:

And it quickly turned out that he understood the anger in White America far better than anyone else and he was willing to say what they wanted to hear — most of all the White working class (72-23!), but also White women(53-43), and his deficit among White women was only 51-45 (CBS exit polls). Looks like quite a few college-educated women ignored what they heard in their gender studies courses and those mandatory credits in Black Studies.

Finally, Thomas Robb, head of the Arkansas-based Knights of the Ku Klux Klan, released a forceful endorsement of Trump:

America’s white voting majority, men and women, have spoken by electing Donald J. Trump to the presidency. They have recognized that this was a last chance election. They are sick and tired of seeing our young men and women die in foreign wars protecting other borders, while leaving our own border unsecure. They have been appalled by the leftist attack upon law and order and the hardworking law enforcement officers who put their lives at risk everyday. They are alarmed by the increasing number of Muslims invading America; with a majority who hate America and are anti-women. And they recognize that the liberal agenda, free trade, and over regulation robs them of jobs and opportunities and harms all communities; white and nonwhite alike.

They are beginning to feel like a stranger in their own country. They are saying to the establishment, “Keep your hands off our families, 2nd Amendment

Throughout the campaign white nationalist support for Trump was steadfast and came from all corners of the movement. For his part, Trump not only ran an openly nativist campaign but he, or the people around him, gave interviews to white nationalist radio shows, retweeted open racists, and refused to quickly denounce the endorsements of hate group leaders.

While the election itself proved difficult to predict, the radical right's jubilant response to president-elect Donald J. Trump should come as no surprise.