Despite being kicked out of Africa for his rhetoric, anti-LGBT pastor Steven Anderson is returning to the continent. And this time, he has help. 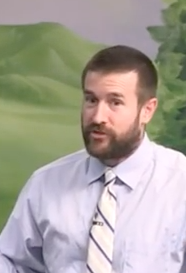 Last fall, pastor Steven Anderson was banned from entering South Africa and deported from Botswana because of his anti-LGBT rhetoric, including praising the massacre of 49 LGBT people in Orlando as “50 less pedophiles in the world” and calling for the executions of LGBT people.

But Anderson is back in Africa, working with Oscar Bougardt, an anti-LGBT pastor, to open churches in Cape Town, South Africa, and with an American colleague and former member of Anderson’s congregation, Garrett Kirchway, in Malawi.

Anderson reported in a December blog post that he received his visa to visit Malawi. It’s unknown whether he will attempt to enter South Africa.

Last week, the Mail & Guardian reported that the Rev. Oscar Bougardt, who was planning to host Anderson in South Africa before the country banned him, is now planning to open two churches in that country, with Anderson involved.

“We know that the government banned him,” Bougardt told The Mail & Guardi, “but that is not going to stop us from having a church here in Cape Town.”

Bougardt visited Anderson in the U.S. for two weeks last November and announced he would be buying a building to establish a South African branch of Anderson’s Faithful Word Baptist Church.

Bougardt’s personal history of anti-LGBT extremism dates to 2011, when he stated that Archbishop Desmond Tutu would burn in hell for supporting the LGBT community. He also falsely claimed that most LGBT people are drug addicts and child molesters. He has also falsely claimed that LGBT people are “to blame for all sex attacks on children, because people who kill and molest children have a homosexual background.”

In 2013, the South African Human Rights Commission sued Bougardt for hate speech following complaints about his vicioius anti-LGBT statements. In South Africa, complaints of hate speech are lodged with Equality Courts, which are specifically designated to consider claims of discrimination, hate speech, or harassment. A settlement was reached in 2014, and  under the terms of it, Bougardt is prohibited from publishing statements that are discriminatory or incite hatred or harm on the basis of sexual orientation, according to Mambaonline, an LGBT African news source.

Bougardt, however, seems to have ignored the case and the court order and continues to make inflammatory homophobic comments. In June 2015, Bougardt allegedly left a comment on Mambaonline that LGBT people “behave worse than animals in bed and…belong in a cage.” He also said that if he were president, he would “lock them in cages where they belong.”

In a comment on another article, he said, “We need ISIS to come to countries who are homosexual friendly. ISIS. Please come rid South Africa of homosexual curse.”