Notorious Internet troll Chuck Johnson, who was banned from Twitter for requesting donations to “take out” a Black Lives Matter activist and was once called “the most hated man on the internet,” is recommending candidates to serve in President-elect Trump's administration.

Johnson appeared Dec. 22 (go to 1:50:20) on Libertarian blogger Stefan Molyneux’s online radio show in which he said, in addition to buying a house and “knocking up his wife,” that he had been “doing a lot of the vetting for the administration, and the Trump transition.” Forbes noted in a recent story that Johnson doesn’t have an official position, but is working behind the scenes with members of the transition team’s executive committee, including Peter Thiel. 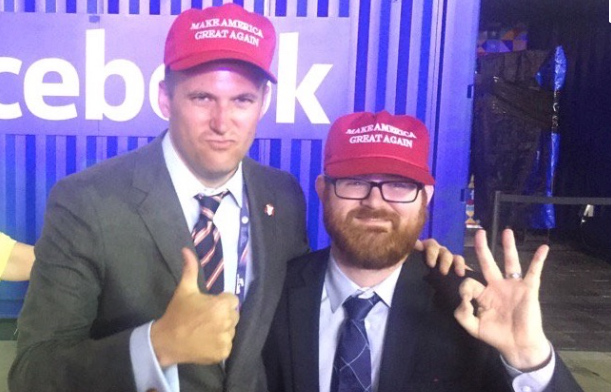 Johnson has made a name for himself as a blogger and controversial online conservative personality trafficking in fake news and conspiracy theories. He is also known for his trolling, which includes publishing the home addresses of New York Times reporters he erroneously claimed released the name of the policeman who shot Michael Brown in Ferguson and the home address of a woman he claimed was the source of Rolling Stone’s now-retracted story about an alleged rape on the University of Virginia campus. Johnson posted a photo of the alleged victim, but the woman, with no relation to the case, threatened to sue Johnson.

Johnson also has numerous ties to the racist “Alt-Right” and has professed white supremacist views.

In July 2016, Johnson appeared as a guest on the racist radio show Fash the Nation, in which he claimed that he got interested in “race realism” – a phrase white nationalists use to refer to their racist ideology – at a young age, and had already read the pseudoscientific book The Bell Curve, which claims that blacks are intellectually inferior to whites. On the show, he maintained that ethnic and racial stereotypes are “largely true” and he admitted to factoring them into hiring practices and also that blacks are dumber than whites.

And at a certain point you…If we’re all the same, you would have statistically expected that if blacks are fifteen percent of the population, they would make up, you know, fifteen percent of honors winners, you know, honor students or whatever. And yet that’s never the case. And so you have to sit…You have to believe — that every single school on the planet, and in every single environment that’s run by white people — that they’re systematically discriminating against blacks for some reason. Or you have to believe the more obvious thing which is that they’re dumber. And enough experience with them kind of persuades you that the dumber thing is probably true.Regarding Jews, Johnson had this to say:

Regarding Jews, Johnson had this to say:

You know, when you do anything sort of, like, involving IQ of above 130 you’re gonna meet a lot of Jews. And what’s interesting to me is how they’re both, like, victim and oppressor in their psychology. And just how neurotic they are as a group. So I think it’s…You know, my attitude is that they should be on tap but never really on top of a lot of decision-making, except for rare exceptions to the rule.

But for me, the neuroticism that’s clearly a big part of their evolutionary situation is interesting. And of course I get very upset with them because they have this idea that most goyim that they meet are actually quite dumb. And that’s true for a lot of them but I always have to sort of like set them apart and be like, ‘Look, I know you meet a lot of stupid ones but like I’m the exception. You know, and you need to start treating me with respect.’ It’s interesting how, when you say that, a lot of the tricks that they try to use on people, they just sort of, like, disappear. …And it is interesting how the things that are the most screwed up in our society — media, education, and government — seem to have a disproportionate number of them.

Prior to being banned from Twitter, Johnson often retweeted anti-Semites and white nationalists. He also quoted the “mantra,” the white nationalist phrase that “anti-racist is anti-white.” In April of 2015, Johnson did a series of Tweets in which he repeatedly used a racist slur in what he claimed was an attempt to have a conversation on race. 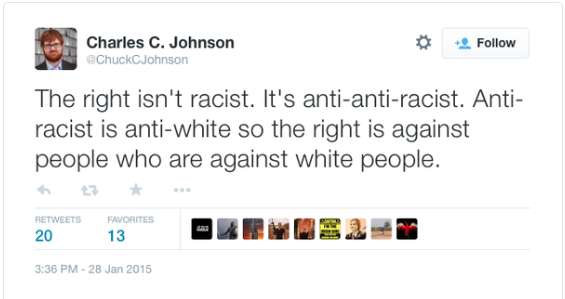 In addition to his GotNews site, Johnson has worked with Steve Bannon at Breitbart.com before Bannon left to become President-elect Trump’s chief strategist. Last fall, Johnson and Bannon led an effort before the second presidential debate in October to hold a press conference with four women who alleged that former president Bill Clinton had raped, sexually abused or sexually harassed them.