The Oath Keepers were in attendance at the swearing in of President-elect Donald Trump this morning. But while most onlookers were there to cheer on – or protest – the incoming president, the Oath Keepers were combing the crowd for suspicious behavior from political opponents on the left, and, of course, looking for anyone who appeared to be a member of ISIS.

Stewart Rhodes, Oath Keepers founder and president, issued a “Call to Action” Tuesday on the group’s website announcing “Operation DefendJ20” (J20 is short for Jan. 20, Inauguration Day). Rhodes also stated that the Oath Keepers would be coordinating with the antigovernment Three Percenters and the far-right Bikers for Trump.

“We call on those of you who are able-bodied and know how to handle yourselves well, and especially military and police veterans with applicable training and experience, who can remain calm under pressure, to come to Washington DC … to protect peaceable American patriots who are now being threatened with assault and other acts of violence by radical leftist groups,” Rhodes stated before telling his followers to also “watch for jihadist terrorists.”

Rhodes asked his usually armed members to flock to D.C. in teams for their own safety, but also to exercise restraint and adhere to the official prohibited items list for Inauguration Day – a list that, of course, prohibits firearms. Rhodes tasked his members with filming incidents and to report them to police, unless a moment arose where they would be forced to go “hands on.”

Some comments on the organization’s website, however, show glimpses of a far less-restrained mindset than the one publicly displayed by Rhodes.

“We WILL be there,” a commenter named Marlene wrote. “And we will be prepared. We will not allow soros [sic] and the globalists start a civil war where we fight against each other. But we are prepared for a full scale revolution against tyranny on OUR own terms at a later time. Most of these anti-American fascists are not even Americans. They represent the dregs of humanity Obama [sic] has brought into our country just for this purpose – all illegal all foreign and all who hate us because they hate themselves. We are united and strongly behind you Oath Keepers.”

“Remember this is home grown terrorism,” a commenter named Aaron wrote. “Many are foriegners [sic] that promote Islam and belittle Christianity. This really is a fight for a survival of our nation. God bless.”

In the days before Rhodes’ announcement, a prominent Oath Keepers blogger, who goes by the pen name Navy Jack, wrote a blog on the Oath Keepers website titled: “Communists Intend to Overthrow the United States before Inauguration Day.” Citing the same organizations as Rhodes, Navy Jack admits that it’s unlikely the protestors will achieve their goals, but once again the conspiracy theory-driven Oath Keepers whipped its members into a state of frenzy.

“So let it begin,” writes a user named Rev. Dave. “I don’t like commies any more than I like NAZIs [sic]. If law enforcement can’t put them down, I’ll be more than willing to help out by putting a few down myself.”

In more than a couple instances, comments from the Oath Keepers directly contradict the organization’s stated purpose to stand up against perceived tyranny, and, actually, welcome it with open arms.

“What Navy Jack is missing-is the point that once Donald Trump is sworn in as president…. If there are massive disturbances and riots, this guy will act with an iron hammer,” a user named Shinmen Takezo writes before gleefully imagining the use of the U.S. military on American soil. “President Trump could bring in an armored division and air-drop troops … to round up and arrest (and if necesary [sic] use lethal force) to bring these mother-f------ to justice for treason and sedition.”

“Massive disruptions in the streets may be incited; but the law also provides for dealing with such events,” writes Edwin Vieira, a Constitutional lawyer and driving ideologue of the Oath Keepers. “If the situation were really one of incipient neo-Bolshevik revolution that could not be put down through normal police methods, the law provides the perfect remedy in 10 U.S.C. secs. 332 and 333.”

Vieira is technically correct, although legal issues that sometimes seem like they might have an easy answer oftentimes don’t, and can take many days to research and consider. Ten U.S.C. 332 states that the president can use the armed forces and National Guard when “unlawful obstructions, combinations, or assemblages, or rebellion against authority of the United States, make it impracticable to enforce the laws of the United States.”

But among the Oath Keepers 10 “Orders We Will Not Obey,” which exemplifies the group’s conspiratorial mindset, is order number four: “We will NOT obey orders to impose martial law or a ‘state of emergency’ on a state, or to enter with force into a state, without the express consent and invitation of that state’s legislature and governor.”

To suddenly see Vieira, an ideological leader of the Oath Keepers, citing the use of the military on American soil, against American citizens, as a “perfect remedy” to protests shows just how little the Oath Keepers truly worry about a “police state,” so long as it’s in the right hands.

Rhodes’ announcement of Operation DefendJ20 came after a covert Oath Keepers mission, codenamed Operation Hypo, in which the organization alleges to have infiltrated the groups DisruptJ20, ANTIFA and Refuse Fascism and uncovered plots to disrupt the swearing in of President-elect Donald Trump and surrounding events. 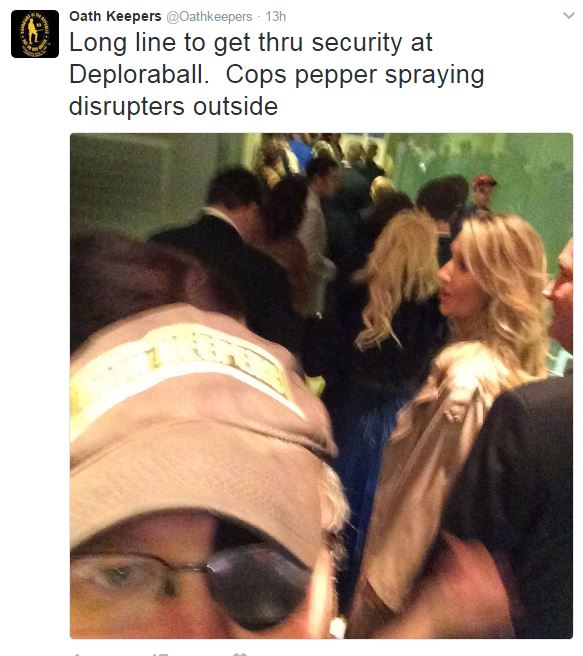 Stewart Rhodes at the "Deploraball."

“We have also offered to provide Project Veritas with volunteer security and personnel protection assistance, as our way of supporting their mission,” Rhodes says.

A video that appears to be from a hidden body camera worn by a Project Veritas member was released by the group days ago, where the operative allegedly sits down with members of a far-left group and records them talking about compromising the ventilation system at the Deploraball with butyric acid or setting off the smoke alarm and sprinkler system. Rhodes, through Operation Hypo, says his organization can verify a number of Project Veritas’ claims.

The Oath Keepers tweeted a photo of Rhodes yesterday, presumably providing security at the Deploraball.

This is the second undercover operation conducted by the Oath Keepers in recent months – both focusing on the presidential election. Last November, following propaganda of imminent voter fraud from the conspiratorial fringe and then-presidential candidate Trump, Rhodes announced Operation Sabot and instructed his members to monitor voting stations for fraud.

It remains unclear how many Oath Keepers were in attendance for Operation DefendJ20. Rhodes says members are justified to stay home and protect their communities from ISIS attacks and potential nationwide civil unrest sparked by the day’s events. But Rhodes and a handful of others appear in photos in D.C. posted on the Oath Keepers’ Twitter account this morning, where they continue to monitor the day’s events.

And if you couldn’t make it to D.C., Rhodes, who sells membership to his organization for up to $1,500 in return for a laminated membership card, a certificate and access to an online forum, among other low-cost items, would like your donations for travel expenses.