President Trump’s executive orders on immigration, announced by the administration on Wednesday, include a plan to publicize purported crimes committed by undocumented immigrants in so-called “sanctuary cities.”

The aim is to pressure the many major cities and states that have already announced their unwillingness to cooperate with the administration’s increasingly hardline policies against undocumented immigrants. Because these communities have generally declined to task local law enforcement with enforcing federal immigration laws, they have come to be known as sanctuary cities.

For anyone familiar with Breitbart News under Stephen K. Bannon, it’s obvious that this new fear-mongering tactic comes straight from the playbook of the man who is now the chief strategist and senior counselor to the president. Bannon’s Breitbart has championed such hardline anti-immigrant ideas for years.

While incidents of violence and tragedy inflicted by newcomers to this country certainly occur, the allegation that immigrants are more criminal and dangerous than others is false. Numerous studies over many years have found that immigrants as a group are significantly less criminal than native-born Americans.

One of them, a 2015 study by the American Immigration Council, found that between 1990 and 2013 — a period when unauthorized immigration was on the rise, although that rate has stabilized since around 2009 — the crime rate among that population plummeted. As the report noted in its introduction:

For more than a century, innumerable studies have confirmed two simple yet powerful truths about the relationship between immigration and crime: immigrants [including undocumented immigrants] are less likely to commit serious crimes or be behind bars than the native-born, and high rates of immigration are associated with lower rates of violent crime and property crime.

Unfortunately, immigration policy is frequently shaped more by fear and stereotype than by empirical evidence. As a result, immigrants have the stigma of “criminality” ascribed to them by an ever-evolving assortment of laws and immigration-enforcement mechanisms. Put differently, immigrants are being defined more and more as threats.

Under Bannon, Breitbart published prolifically about crime committed by immigrants, including populating an “Immigrant Crime” tag, using the derogatory term “illegals” as house style, and launching a project to document the horrific drug cartel violence on the other side of the border. In tone and substance, Breitbart repeatedly framed immigrants as invaders and violent threats.

Also under Bannon, Breitbart promoted the work of Maria Espinoza and The Remembrance Project, which has numerous links to anti-immigrant extremism. Bannon interviewed Espinoza on his Breitbart News Daily radio show and his site regularly and uncritically covered Espinoza’s claims of an “epidemic of killings” of native-born Americans by unauthorized immigrants.

Espinoza makes that claim in The Social Contract, a racist journal founded by white nationalist John Tanton. In a 2012 article, she asserted that “25 Americans or legal residents die each day at the hands of illegal aliens.” As Hatewatch has reported, that figure originated with nativist stalwart U.S. Rep. Steve King (R-Iowa) who said he “extrapolated” it from a 2005 Government Accountability Office study. But if King were correct, that would mean that 3.5% of the population (undocumented immigrants) is responsible for 31% of the murders in the United States — an outlandish claim to begin with, and one that is also clearly wrong given the many studies that show that immigrants are less criminal than others.

The exaggeration of violent threats and the criminality of different races and ethnicities goes back to the founding of this country and has long been a tactic of the modern white nationalist movement. The white nationalist Council of Conservative Citizens (CCC) runs a website dedicated in part to exposing another “epidemic,” that of “black-on-white” crime. The CCC maintains a “Memorial Wall” dedicated to white victims of violence which includes incidents of domestic or drug violence but where the common denominator is the race of the perpetrator. The CCC’s commitment to hyping this “epidemic” and their savvy manipulation of Google Search provided the entry point for the radicalization of Dylann Roof. 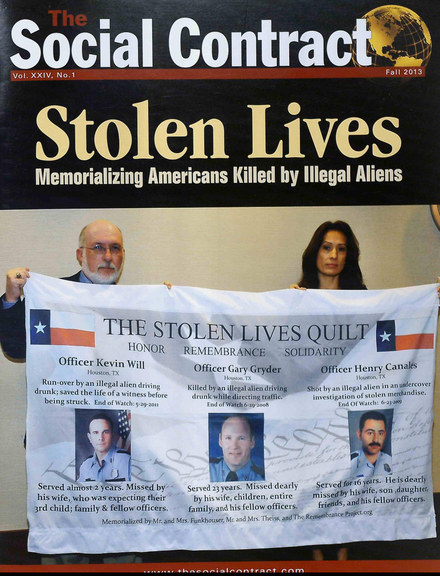 In 2013, Espinoza appeared in the The Social Contract again, this time on the cover. A photograph showed her holding one of her “stolen lives” quilts with the editor of the journal, white nationalist Wayne Lutton. Lutton was for a number of years on the editorial board of Citizens Informer, the tabloid of the CCC.

The announcement of the administration’s intent to highlight crime as a policy enforcement mechanism was to be expected, given Bannon’s role in the White House. Candidate Trump also elevated Espinoza and The Remembrance Project during the campaign, attending a fundraiser by the group in September 2016.

What shouldn’t be lost in this latest effort to further criminalize undocumented immigrants is the origin of this propaganda and the enabling role played by far-right publications like Breitbart, which in all likelihood will be the source of the stories the administration will highlight. After all, Bannon has already created the infrastructure.