The SPLC has collected 1,372 reported bias incidents between the day after the election and February 7. These incidents were either reported directly to the SPLC via our #ReportHate intake page or collected from news reports.

In an effort to better document and verify these incidents we’ve partnered with ProPublica to share our database with their investigative team. The name of the project is Documenting Hate and its mission is excerpted here:

Hate crimes and bias incidents are a national problem, but there’s no reliable data on the nature or prevalence of the violence. We’re collecting and verifying reports to create a national database for use by journalists, researchers and civil-rights organizations.

The SPLC is committed to maintaining a full scope and accurate survey of hate incidents across the United States. The SPLC will continue to collect and capture reports and publish on a monthly basis at Hatewatch (which may take a different shape) while submitting our updated collection to the consortium of investigative outlets assembled by ProPublica.

These threats spiked the overall trend line, which remains much lower than the day after the election. There were 159 total reports in January:

Among the targets that received the bomb threat was the Jewish Community Center in Overland Park, Kansas, where a longtime neo-Nazi killed three people in a shooting rampage in 2014.

The Jewish Telegraphic Agency obtained a recording of one of the bomb threats. It’s chilling:

The wave of anonymous bomb threats echoes the rash of anonymous letters sent to at least 16 mosques in the month of December. The source of the letters is still under investigation. On January 22, a mosque in Davis, Calif. that had received one of the letters a month earlier was vandalized in the middle of the night.

We’ve also seen a steady accumulation of white nationalist flyering reports (at least 85), 78 percent of which occurred on college campuses. The white nationalist “alt-right” is responsible for the bulk of the flyering incidents, advertising for groups like Identity Evropa, American Vanguard, and The Right Stuff.

In Texas, an Identity Evropa flyer that read “Equality is a False God” was pasted on the door of a Muslim dentist’s office. In New Hampshire, a community held a vigil following the discovery of multiple “White Genocide” flyers outside a middle and elementary school.

Here are some charts on the full picture of post-election bias incidents. Anti-immigrant incidents remain the most reported:

A report from California:

We were eating dinner celebrating our son's 1.5 yoa birthday (a tradition we started with our oldest). At the end he started getting loud so we got ready to leave. A woman in a table behind us said you should get out of here. Then when my husband said we are and our son is only 1, she started shouting at us you should go back to your country. A phrase she started repeating over and over again loudly.

In Las Vegas, a man captured on video a barrage of racist anti-Filipino harassment from a neighbor:

My partner and i (both trans) received a note under the door of our apartment reading, "you arent protected any more queers" 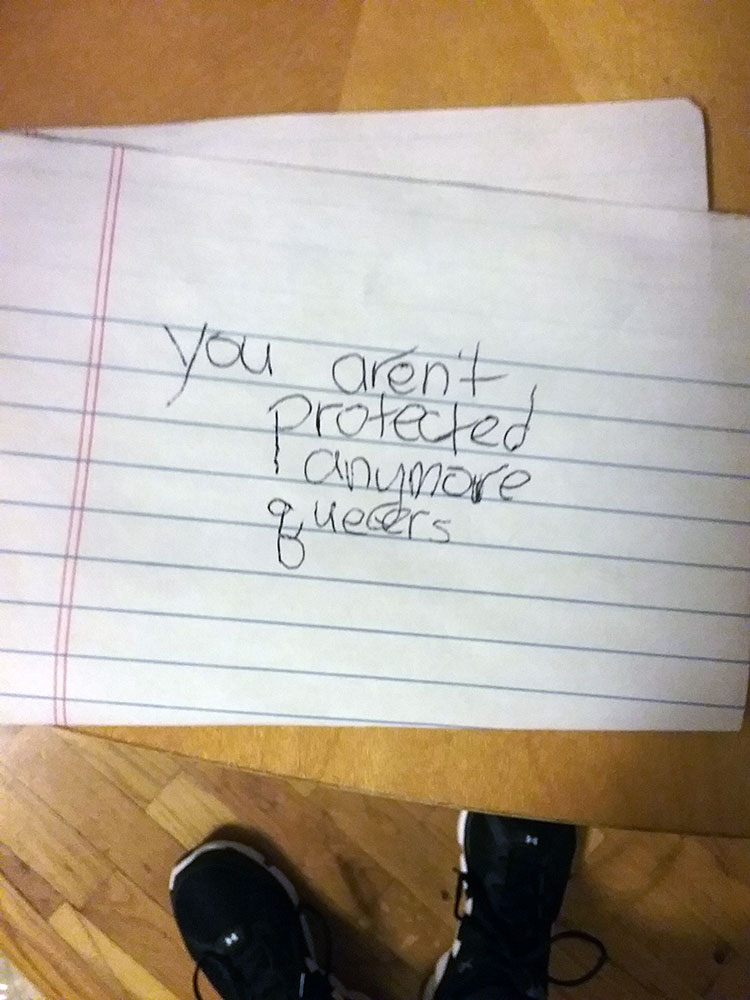