Extremist anti-Muslim organizer with President Trump's ear has an answer to calming the waters after the Flynn debacle –– another extremist with a dubious track record. 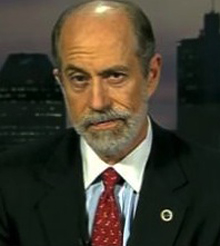 Frank Gaffney, one of the unofficial advisers behind President Trump’s Muslim travel ban and a key right-wing voice on national security issues, has a nominee in mind to replace former National Security Adviser Michael Flynn – a bold choice, someone he thinks can help the new chief executive overcome the Flynn debacle.

Gaffney expanded the idea further in a column for the right-wing webzine Newsmax titled “Trump Must Channel Reagan on National Security Post.” He referenced Reagan’s 1986 selection of William Clark as national security advisory.

“Like Ronald Reagan, [Trump] needs a top hand who has the judgment and ability to staff up and guide a national security team to achieve victory over Jihad,” he wrote. “Retired Lieutenant General William "Jerry" Boykin is that man.”

Gaffney also appeared on the Breitbart News Daily XM Radio program and promoted Boykin further. “We need a similar guy. I have a candidate. I’m sure that’s the kiss of death, but I believe the guy who should replace General Mike Flynn is another retired Army lieutenant general by the name of William ‘Jerry’ Boykin,” Gaffney told host Alex Marlow.

He said Boykin has “that kind of clarity and courage under fire, most especially, of an extraordinary leader of men, one of our most decorated special operators.”

“This is the guy for this time, I think, and I hope that Donald Trump will think about bringing him in. He knows him, he worked with him in the course of the campaign, and he would, I believe, help him execute a strategy for victory over jihad, which is what we need at the moment,” he said.

However, if Trump is seeking to avoid controversy, Boykin might not fit the bill.

Boykin came to national prominence while still in the Army during the Iraq war, when he gave a speech about hunting down strongman Osman Atto in Mogadishu. "He went on CNN and he laughed at us, and he said, 'They'll never get me because Allah will protect me. Allah will protect me.' Well, you know what? I knew that my God was bigger than his," Boykin told the Los Angeles Times. "I knew that my God was a real God and his was an idol." He also told a religious group in Oregon that Islamic extremists hate the United States “because we’re a Christian nation, because our foundation and our roots are Judeo-Christian.”

Alongside a history of many other controversial remarks, Boykin has said that “Americans need to have more babies” to counteract the world’s growing Muslim population, called President Obama a “Communist dictator” who is using psychological operations on Americans, claimed that the repeal of the “don’t ask, don’t tell” doctrine has led to the “absolute destruction” of the military, warned that Obama is “creating a Marxist nation” with an agenda “straight out of the Communist Manifesto," and even theorized that Obamacare is part of a conspiracy to create a “Brownshirt army.”

In 2014, Boykin was caught on a hot mic making an awkward attempt at humor by telling a reporter from Israel that “Jews are the problem” and the “cause of all the problems in the world.”

In 2015, he told a gathering of the extremist anti-LGBT organization Watchmen on the Walls that Christians in America were being persecuted, and that it was time for them to rise up “like an Army.”

“We’re at war,” Boykin said, as he declared that the push for gay rights is “evil” and cannot be compared to the fight for civil rights: “This is not about civil rights, this is about the evil that has come into our society and is trying to destroy our ability and our freedom to be able to worship our god as we choose.”

Since 2012, Boykin has been executive vice president of the Family Research Council, an anti-LGBT hate group.

Gaffney himself is no stranger to extremism. His Center for Security Policy regularly demonizes of Muslims both abroad and in the United States. He travels around the country and holds daylong conferences devoted to promoting those smears, along with a heavy dose of conspiracy theories and crackpot claims. He is also credited with having helped foment a significant wave of Islamophobia in the U.S. that crested in 2016.

Nonetheless, Gaffney’s CSP has played a critical role in shaping the Trump administration's foreign policy regarding Muslims. Trump made headlines during the campaign when he cited dubious statistics generated by Gaffney’s group to defend his proposal for a ban on all immigration by Muslims into the United States.

Trump reportedly received advice on “national security issues” from Gaffney during his transition, but Gaffney said he did not have a formal position with the new administration.

Even with Gaffney's support, however, Boykin is unlikely to be chosen. According to White House Press Secretary Sean Spicer, Trump has narrowed down the choice to replace Flynn to three candidates: Ret. Admiral Robert Harward, Ret. Gen. David Petraeus, and Ret. Lt. Gen. Keith Kellogg.