After just over 20 years as the premier online gathering place for white Supremacists, Stormfront.org lost its crown to the unruly, meme-fueled neo-Nazi propaganda shop, the Daily Stormer, in July of 2016.

Despite being relegated to second-best, the site still boasts an impressive number of registrations — more than 320,000 — and represents one of the most complete archives of global far-right extremism as it pertains to current events.

In an effort to better understand the scope and scale of the influence Stormfront enjoyed as the forum of record for over two decades, Hatewatch is introducing a weekly collection of graphs and analysis related to the site’s most popular section, “Newslinks & Articles,” home of nearly 3 million posts.

Founded in 1995, Stormfront did not introduce a forum to the site until 2001. Registrants participating in the Newslinks & Articles section steadily climbed annually until 2008, with a sharp increase from ‘07 to ‘08, the period leading up to the election of President Barack Obama. 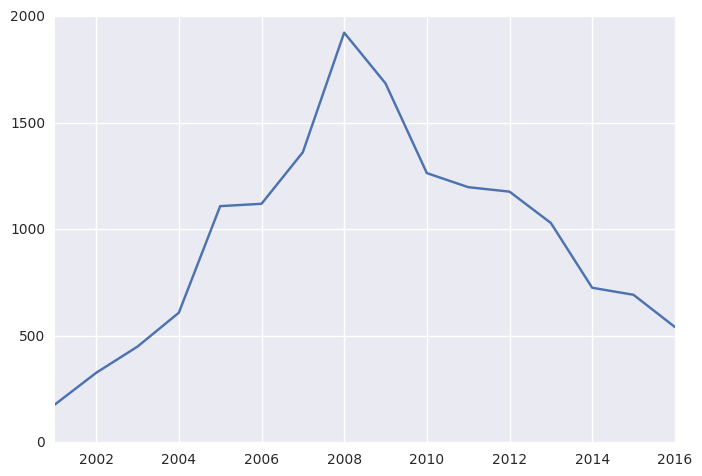 Since ‘08 annual registrations have fallen off precipitously — a trend that seems unlikely to abate after the youthful Daily Stormer dethroned Stormfront last July.

While visitors aren’t required to register, you must be signed into an account to post content. Guests to the forum typically outnumber registered users by a factor of 10.

Examining annual registrations in the context of first posts — any account that posts for the first time in Newslinks & Articles — reveals a strong positive correlation.

From 2001 to late 2007, there were regularly more registrations than first posts, likely as a community began to form and the site’s reputation grew. From early 2008 onward, rates of registration and first postings were nearly identical.

One notable exception is in mid-2007, when Hillary Clinton ended her bid for the Presidency, making Barack Obama the presumptive Democratic nominee. This seems to have driven a large population of already registered users into posting for the first time.

Notably, there was not a corresponding spike in new registrations until late 2008 when Obama won the presidency. The surge in both registrations and first posts reflects presumed shock and rage from the Stormfront population to the United States’ first black president.

The extent of that shock and rage is further illustrated by considering the number of new registrants in the context of the number of active users on Stormfront.

The period around the election of Barack Obama to his first term as president saw new registrations raise to an all-time high, surpassing all active posters. The surge was the third and final time that registrations surpassed active users on the site after mid-2006. Both new registrations and active posters have both trended downward since President Obama’s election in 2008 — a course unlikely to change as future converts to white supremacy bypass Stormfront entirely in favor of a new generation of provocative sites less interested in commiserating than fighting an inflammatory meme war online.