It ain’t easy being a bulldog at a Trump rally, especially when your owner is wearing a brown paper bag over his head and pushing you around in a doggie stroller with a cardboard-and-sharpie “Bulldog 4 Trump” sign attached.

After posing for a few photos, the bulldog jumped out of his stroller and waddled off into the star-spangled crowd. 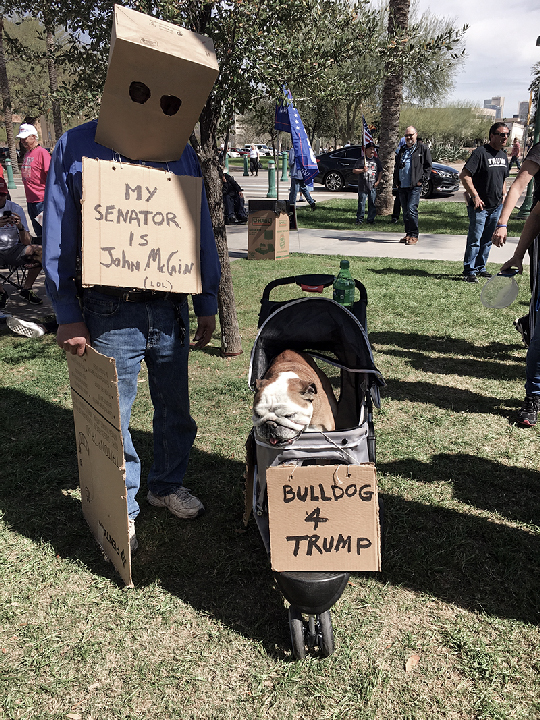 This was one of the lighter moments at last Saturday’s March 4 Trump rally in Phoenix, Arizona, one of around 50 such events taking place that same day across the country.

Phoenix’s version wasn’t much of a march, but rather a self-congratulating confluence of Trump supporters.

The day kicked off with a parade of about 60 bikers — mostly made up of co-organizers Riders USA and Sons of Liberty Riders Arizona — roaring up to the capitol and doing a lap around the park to rousing cheers.

Speaking at the event were folks like for Oathkeeper Richard Mack, who founded the Constitutional Sheriffs and Peace Officers Association, a group that believes the enforcement of federal laws is optional.

Also taking the stage was nativist former sheriff Paul Babeu, who boasted about appearing on CNN with Anderson Cooper recently.

The most popular accessory among the patriotic crowd was the American flag, but a close second was guns; not uncommon in an open-carry state, but rarely in such abundance. Many private citizens strolled around the booths with semi-automatic rifles slung from their shoulders or a Glock snug at the hip.

On the law enforcement side there were capitol police with their wide-brimmed hats, a pair of sharp shooters on the roof of a nearby building, a gaggle of DPS agents at the ready inside the State Senate building, and a Phoenix PD command post discretely stationed a few blocks away.

However, one group of rally-goers drew a great deal of attention. Some mistook them for the National Guard, as the 16 or so men and women were transported to the rally in military-style trucks devoid of license plates.

“That’s some expensive gear they’ve got there,” remarked a capitol policeman as he watched them patrol the grounds in groups of two and three.

They definitely stood out in matching desert camo uniforms, carrying AR-15s, sidearms and a half-dozen or so extra magazines each, with kneepads, Kevlar helmets, armor plate carriers and white wires spiraling down from their ears. They had patches on their shoulders bearing the Arizona flag and their blood type. No affiliation with any particular group or unit was visible, and the only identifying marks they bore were plastic nametags identifying them by obvious aliases such as “Achilles,” “Roman,” or “Preacher.”

“We are a private group here to protect and to serve” was all the group’s members would say, and the same line event organizers told reporters.

The assembled “soldiers” were actually members of the Arizona Liberty Guard whose Facebook page shows them conducting weapons training in the desert and abandoned houses.

“Carrying on the honored tradition of our forefathers, we train our members in disaster preparedness and response, Combat Lifesaver (CLS) emergency medical treatment, search and rescue, security, and survivalist techniques. We strive to ensure we're fully prepared to answer the call of service to our great state, and pray it never comes,” reads the About section of their Facebook page.

Given their mission, the March 4 event may have been a bit of a let down. There were a few instances of violence and arrests at other protests around the country that day, but in Phoenix just over a dozen protestors showed up at the Trump rally, and the only kerfuffle was a shouting match between them and Trump supporters.

“Looks like they wrote their signs on pizza boxes,” one man from the Trump camp says dismissively to another. “Hey! Did you just write your signs?” he hollered out.

“Go back to Nazi Germany!” the woman with the sign responded.

“The Muslims helped the Nazis kill Jews! Germany has been overrun by Muslims,” a man shouted back at her.

“Why do you bother debating them?” an exasperated anti-Trump protestor said to no one in particular. “The Jews debated them and they got thrown in the oven.”

“Demonrats!” countered the Trump folks, who at one point resorted to chanting, “Build that wall! Lock her up!” over and over to drown out any more possibility of dialogue, as the cops and militia members looked on.

Through it all wandered a petite woman with a bewildered air. Around her neck was a laminated sign announcing “Free Hugs.”

“Would you like a hug?” she asked. “It seems like what everybody needs is a hug today.”