On February 27, a Douglas County Circuit Court judge sentenced Jose Ismael Torres and Kayla Rae Norton to more than 20 years in prison for terrorizing African Americans at a child’s birthday party in Georgia. Since then, white supremacists have come out in droves claiming the two defendants were given unjust sentences for using racial epithets and displaying the Confederate battle flag, going so far as to threaten the judge and one of the victim’s supporters.

“20 years for f------ freedom of speech … for name calling ... some high school, middle school, kindergarten bullshit,” James Oliver, member of the National Socialist Movement (NSM) — the country’s largest neo-Nazi organization, — said in a Facebook video over the weekend. John Girton, a former Klansmen, said in the same video that, “Not one negro was harmed. However, one of them did get their feelings hurt by the use of the n word.”

White supremacists have also distorted what actually happened on July 25, 2015.

In an attempt to lessen the crimes of Norton and Torres, a variety of white supremacists have created their own version of the story.

“What ACTUALLY happened,” Girton said in a Facebook post, “was these flaggers were INVITED to the party in a very fake act of goodwill in the spirit of interracial peace & harmony and such assorted bullshit, but when they arrived some "urban youth" outside began throwing beer bottles at their truck, causing them to swerve into the median which popped a tire on their truck, stranding them on the scene of what would have been another incident of black on white mob violence.”

In the same Facebook video, Girton said “ 30 Negros,” attacked the defendants and one member, “got stuck there in front of a whole unruly mob of screaming Negros,” after his tire blew out.  While Girton does not refute that Torres, “reached for his shotgun [and] said, “I’ll kill all y’all n------,” he claims it was in self-defense, “in the heat of the altercation.”

According to Oliver, the “Douglasville 15” — a reference to the 15 Respect for the Flag members tried for their role in the incident — “were invited to a trap … to get them to show up … so they could get jumped by all these Negros … at this ‘supposed’ birthday party.”

A neo-confederate posting on Facebook claimed the incident was spurred by a participant at a “black wedding” rupturing a truck tire with a thrown brick. The situation escalated, the story goes, by “the propensity of negroids for hysteria.”

After Norton and Torres’ were sentenced in February, Oliver, Girton and several white supremacists threatened one of the victim’s supporters and Douglas Circuit Judge William Beau McClain. They also started an “[a]ll out cyber war against” the district attorney’s Facebook page, a petition asking for the conviction to, “be overturned or at least reduced dramatically,” and a fundraising drive for Norton and Torres’ family members.

“Something needs [to be] done about judges like this,” Branden Young wrote in a comment thread on Girton’s Facebook page. Jeremy Walls, an associate of the International Keystone Knights of the Ku Klux Klan, said, “You want real justice, find out where he lays his head, find out where his family sleeps at night and go take the things he loves from him,” referring to one of the victim’s supporters.

“This egregious mishandling of justice which led to maximum convictions of 20 years for Jose Torres and 15 years for Kayla Norton must be overturned or at least reduced dramatically. Video submitted as ‘evidence’ doesn't show the supposed weapon Mr. Torres brandished in a threatening manner. Also, there was ZERO physical contact by either Ms. Norton or Mr. Torres against any plaintiff's! Only WORDS! The testimony alone, extremely bias and one-sided is what led to their convictions to the maximum extent of Georgia law and even further, with Judge William McClain adding an additional year. Help bring true justice to this couple and their 3 children who miss their parents tremendously.”

Community First Outreach, a white supremacist non-profit charity lead by Travis Golie — who said in a YouTube video that white people naturally “stay clear of miscegenation,” “to preserve our own people” — started a fundraising drive for the Norton and Torres families.

"First Outreach takes a stand. We vow not to forget. We pledge not to give up. While parents are buried alive in concrete and steel cells, we will be there for the children, the loved ones, and the community. We are currently raising money for exactly that. A recent Court decision kidnapped two parents, and left three kids helpless. So we are standing up to help. Please donate to help us help them! Together we stand. Together we serve.”

For their part, White Lives Matter (WLM), a white supremacist movement led by neo-Nazis, “has pledged to match Community First Outreach dollar for dollar to help the children of the flag flying patriots who the government recently persecuted... Every penny you donate to this noble fund, will be doubled,” Golie, a WLM leader, who claims whites are “gods (sic) chosen people," wrote on his Facebook page.

In spite of working publicly to promote WLM and their various white supremacist organizations, the individuals mentioned have had characteristic disagreements over exactly how they should publicize their efforts. Girton has asked individuals in a Facebook video who “belong to a registered hate group…. to help quietly.” The irony of making this appeal on social media is apparently lost on Girton, who also--in an apparent jab at Steven Shane Howard, a Klansman who made local headlines last week-- said, “let the grown ups handle this in secret like we’re supposed to, invisibly.” In the same video, Oliver signs off giving the Nazi salute and says, “Sieg Heil, White Power, 1488.” 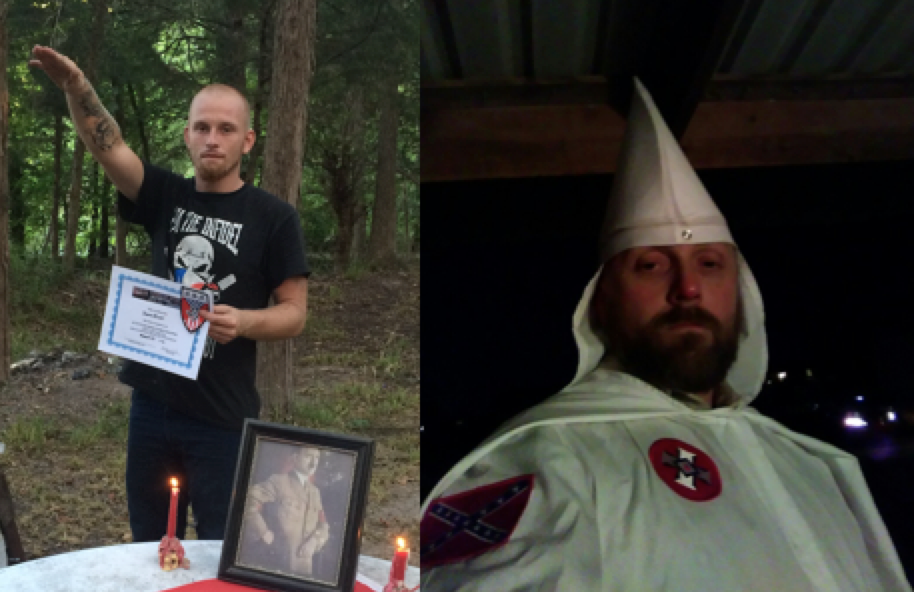 However, Howard had something different in mind. A former NSM member and the imperial wizard of the North Mississippi White Knights used the case as a way to build momentum for his barely existing groups.

Described as a “media w----” by Girton and Oliver, Howard, who lives in Vancouver, Washington did in fact gain media attention after he said 150 to 200 Klansmen planned to protest against the lengthy prison sentence at the Douglas County courthouse last Sunday. Not one of his Klansmen, including Howard himself, showed up.