The largest synagogue in Washington state is among the victims of the recent wave of anti-Semitic attacks, but its rabbis refuse to 'let the growing climate of hate to define who we are.' 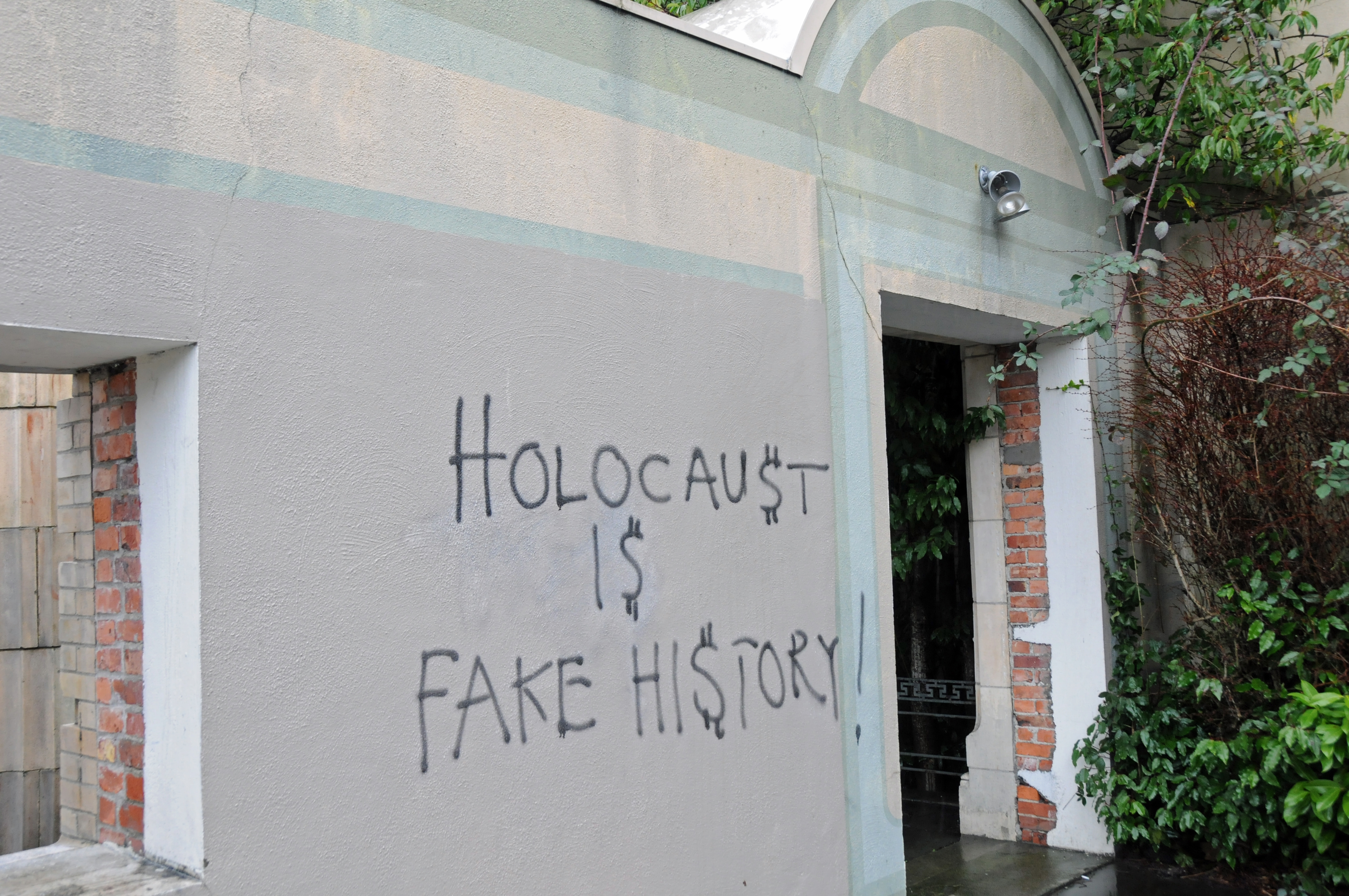 The hate graffiti was painted inside a meditational area on the temple grounds.

When a neighbor first spotted the hate graffiti spray-painted on the wall of the Temple de Hirsch Sinai synagogue in Seattle’s Capitol Hill neighborhood, his first impulse was to cover it over, not to give the haters any more attention.

The graffiti – “Holocau$t i$ fake hi$tory!” – was painted in large letters on a wall inside a meditational area on the temple grounds. So “Carlos,” as the neighbor later identified himself, decided to cover it instead with a sheet painted with the words, “Love Wins.”

“Early this morning while I was walking with my dog I saw the words that had been sprayed on the building,” he explained. “I was so deeply overwhelmed with emotion that when I arrived home I immediately began bawling. Once I regained my composure I felt that the best thing that could be done is to show the love that exists in this world rather than let one person’s actions receive attention unnecessarily.” 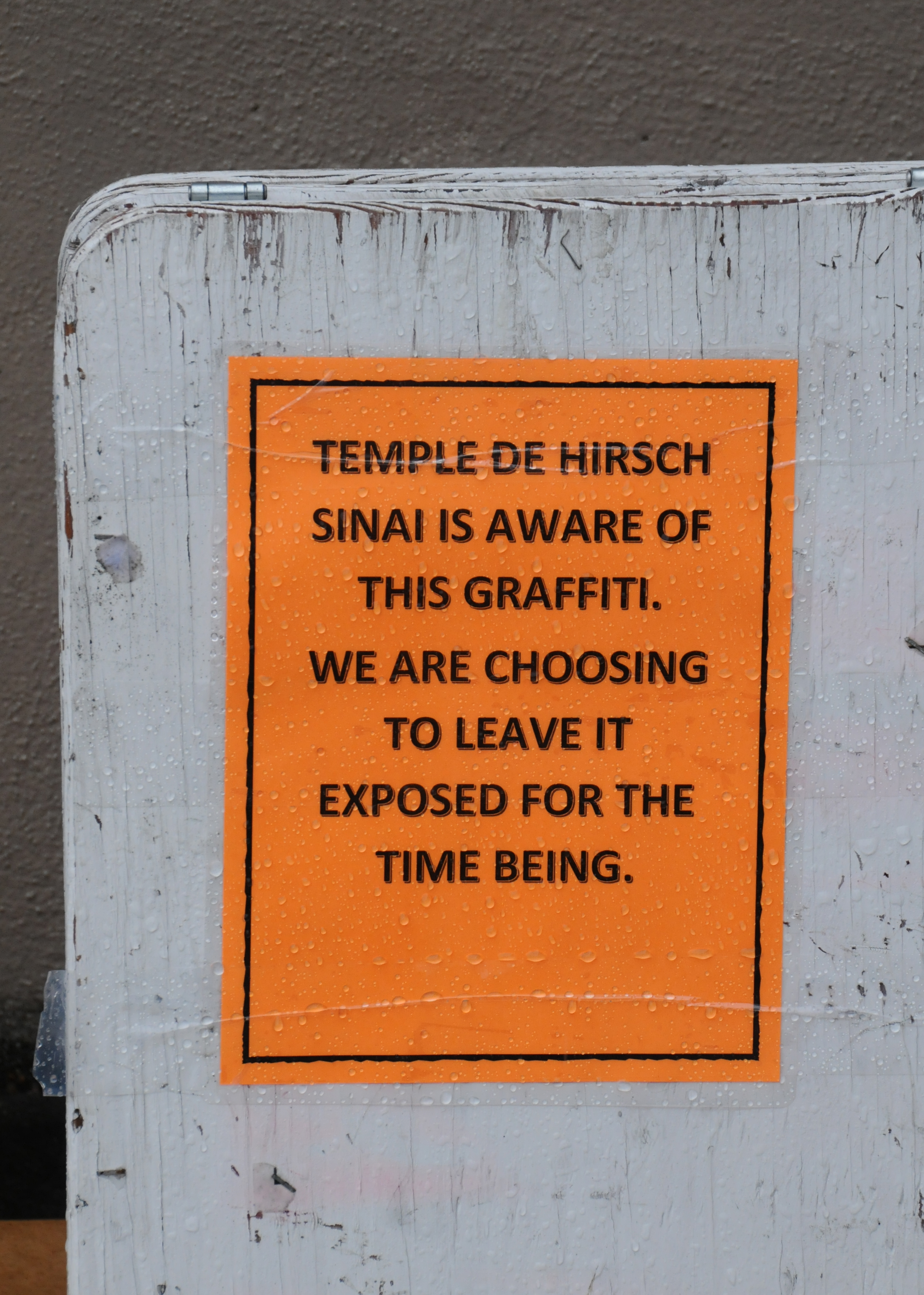 The synagogue's rabbis erected a sign explaining why the graffiti remained uncovered.

Rabbi Daniel Weiner, who oversees the synagogue, appreciated the gesture – but took down the sheet and left the graffiti intact for everyone to see. The synagogue erected a small sign in front reading: “Temple de Hirsch Sinai is aware of this graffiti. We are choosing to leave it exposed for the time being.”

“It was a very sweet gesture and touching, but we took it down,” Weiner said. “I think it’s extremely important that people see this.”

Weiner called the graffiti “a toxic mix of Holocaust denial, the stereotypical charge that Jews are obsessed with money, and the notion coming from the (President Trump) administration that all facts are fungible … fake facts, fake history.”

On the temple’s Facebook page, Weiner explained the rabbis’ reaction. "We immediately contacted law enforcement, who have responded quickly and efficiently in opening an investigation, for which we are profoundly grateful. Temple continues to take vigilant, substantive security measures to insure the safety and well-being of our community. In light of other recent threats and upcoming celebrations, we have further enhanced these measures," he wrote.

"And as we take all of these precautions, we are also adamant in our conviction that we will not allow the toxicity of intolerance and growing climate of hate to define who we are, how we live, and what our nation can be.”

The rabbi called for action on the tide of anti-Semitism from President Trump, who has generally declined to address the wave of bias incidents that have occurred in the wake of the election, other than making a few vague statements. Trump reportedly is also considering eliminating the budget for the State Department’s Office to Monitor and Combat Anti-Semitism.

“A message needs to come from our president, not only decrying anti-Semitism but specifically indicting white supremacists and in particular those who support his candidacy,” Weiner said, adding that he did not blame Trump or his administration directly but regretted “the tone that has been set throughout the campaign.”

“The majority of us need to push back against that and convey that America is still America … there’s no place for hate or tolerance of toxic expression.”

The community’s response, including a statement denouncing the crime from Washington Gov. Jay Inslee, has been heartening to Weiner. He says the members of the Seattle Jewish community have rallied around the act.

“People are incredibly hurt and upset. But most of the calls I’ve gotten, all of the calls have been supportive, but most have been defiant,” he said.