BERKELEY, Calif. – The American far right – alt-right figures, antigovernment movement leaders, and a conglomeration of conspiracists and extremists ranging from anti-feminists to nativists, all angrily voicing their support for Donald Trump – came here Saturday itching for a fight. They found it.

On social media, the organizers and supporters called it “the Next Battle of Berkeley,” a chance to gain revenge for an earlier event on the University of California campus that they believed had infringed on conservatives’ free speech rights: In February, a scheduled appearance by alt-right provocateur Milo Yiannopoulos was shut down by rock-throwing “antifascist” protesters.

So when several hundred of them gathered at a downtown park for a “Free Speech” event Saturday – most from out of town, many from all around the country – they came prepared to do battle with the same black-clad protesters, many of them wearing helmets, pads, and face masks of their own. The result was an inevitable free-for-all, with organized phalanxes on both sides lining up, occasionally erupting into fistfights, and then breaking down in a series of running melees that ran up Center Street into the heart of downtown.

By the day’s end, 11 people were injured and six hospitalized. Police arrested 21 people on a variety of charges.

The rally had drawn wide attention among various right-wing factions leading up to the event. Perhaps the most noteworthy of them were the Oath Keepers, the antigovernment “Patriot” movement group closely associated with the Bundy standoff and various far-right conspiracist activities. 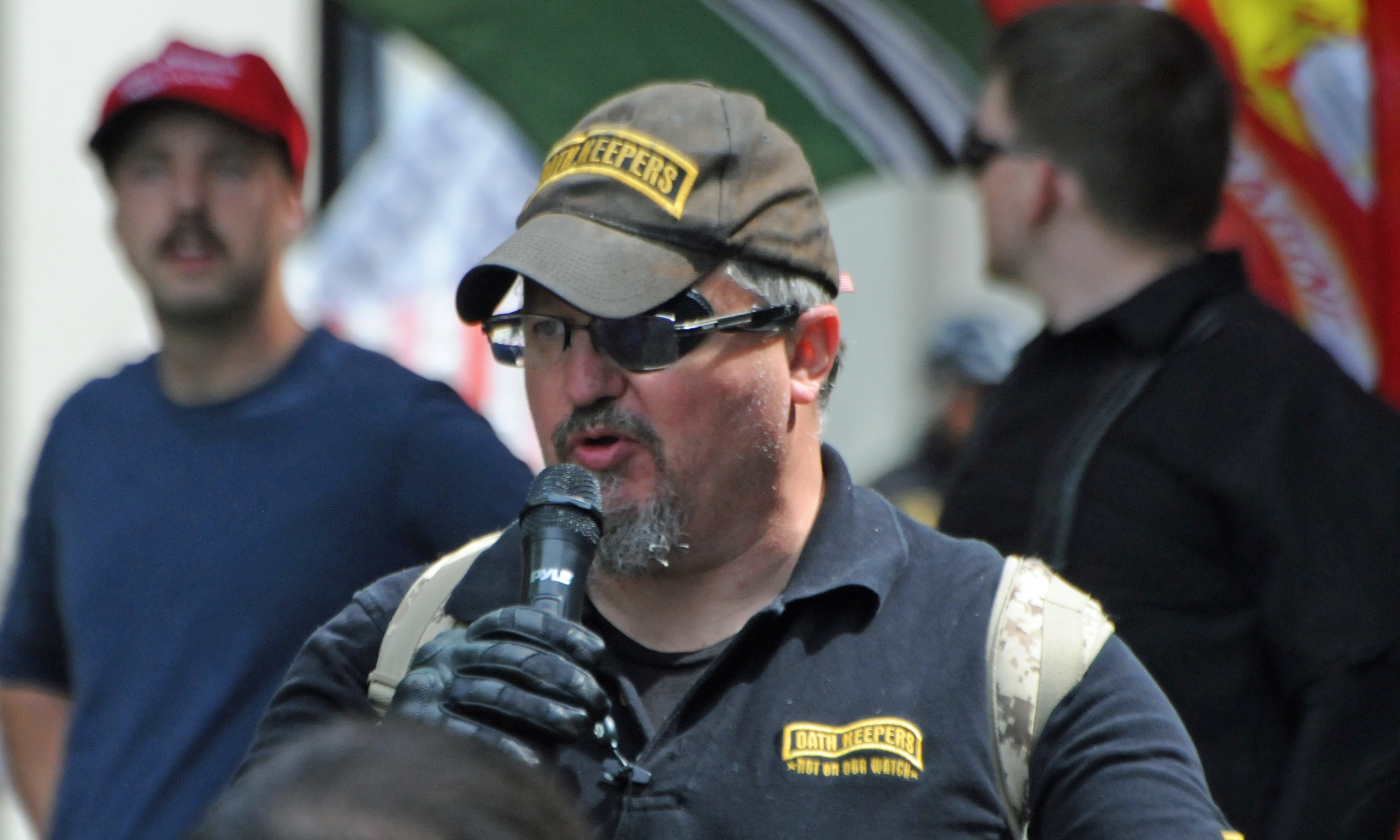 “We’re going [to Berkeley] because people are having their rights violated,” Oath Keepers president Steward Rhodes told a North Carolina gathering the week before. “So it could be argued that with the full support of the local politicians, thugs in the streets are beating people up and suppressing their rights to free speech and assembly. It could be argued that California is in a state of insurrection.” 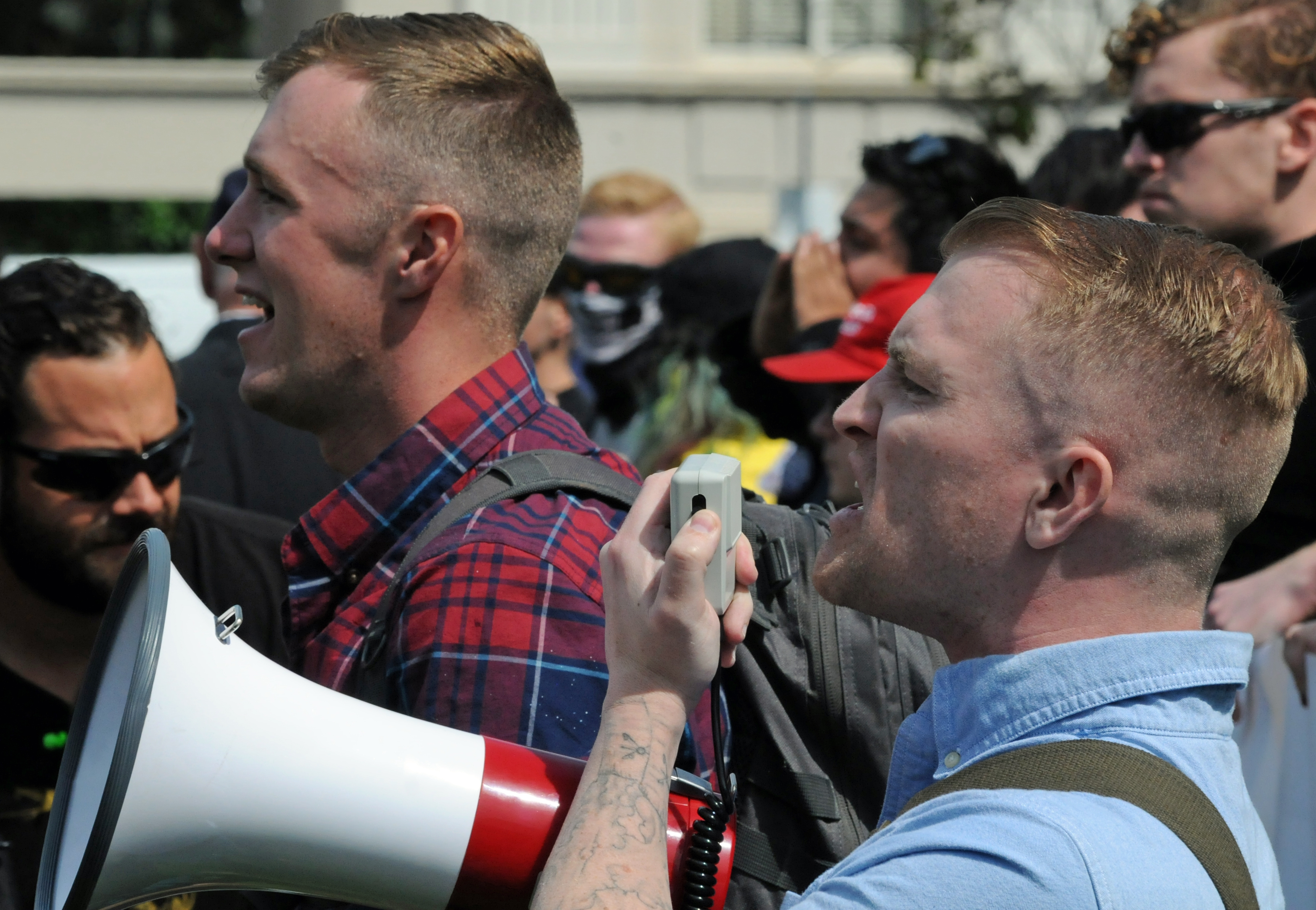 Nathan Damigo, one of the key figures in the student-oriented white-nationalist “Identity Evropa” organization, was not only present, but acted as a provocateur throughout much of the day, egging on protesters and leading a group of young white men with “fascy” haircuts in confrontations on the street. Damigo was videotaped sucker-punching a young woman in black who was embroiled in the street brawls.

The rally was scheduled to begin at noon, but by 11 a.m. both sides were out in force, and the right-wing speakers, including Southern and Rhodes, began addressing the crowd from a tree-covered portion of the park. Meanwhile, hundreds of protesters gathered, separated from the “Patriots” by orange police cordons, enforced by some 250 officers. By around noon, the protesters began to march around the park.

Groups of right-wing activists formed lines to prevent black-clad antifascists from entering their space, even as the protest moved around the east end of the park and then congealed on Center Street, on its west side. It was there that the police cordons finally started breaking down, the two sides were milling as a mob, and fights began to break out. Objects ranging from plastic bottles to large rock to bagels were flying through the air. A trash bin was rolled down the street, and several bins of garbage were set afire. 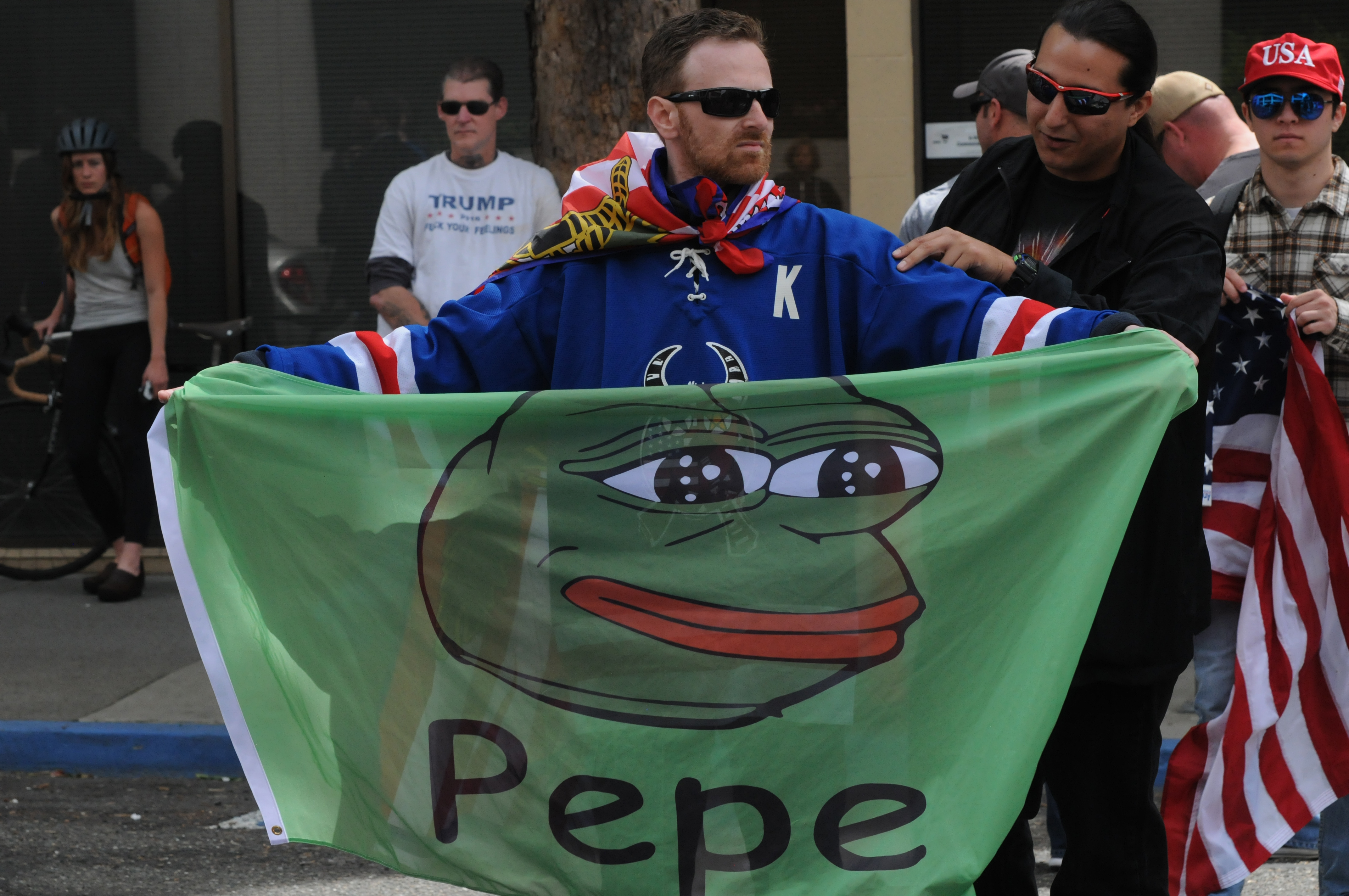 The Pepe banners came out early and often.

Banners came out, including some featuring Pepe the Frog, the notorious alt-right mascot. One sign featured the anti-Semitic meme, “Goyim Know.”

Eventually, the mass of people moved a half-block to the intersection of Center and Milvia streets, where the two sides again faced off for the better part of an hour. Insults were shouted and chanted, threats were made, skirmishes erupted. Both sides appeared to be evenly matched.

That mob broke up when someone lit a large smoke bomb that obscured everyone’s vision for several minutes. In the fog, melees began breaking out, several of them running east up Center. Eventually the mob moved up the block to the intersection of Center with Shattuck, the main downtown boulevard.

The right-wing militants appeared to be attempting to head toward the Cal-Berkeley campus a few blocks further east, but the protesters stiffened their resistance and prevented them from getting much further beyond Shattuck. As participants began drifting away, the combatants remained mostly within a small half-block on Shattuck. Eventually, an organized phalanx of police moved in and broke up the crowd, and most participants went home.

Afterward, the alt-right was exultant, claiming “victory”: Chapman claimed that “Berkeley got sacked,” while the rally’s original organizers, a far-right group called the Proud Boys, boasted: “Today was an enormous victory! I could not be more proud or grateful for every one who attended the event! This was the turning point!”