After an 11th-hour injunction required Auburn University to uphold a contract allowing Richard Spencer to speak at the school’s Foy Hall on April 18, protesters and supporters descended on the small, college town, resulting in several small scuffles and altercations. When the dust settled, three had been arrested for misdemeanor violence, one of whom the neo-Confederate League of the South (LOS) is claiming as a member.

Spencer had previously paid $700 to reserve a stage to speak at Foy. Amid fears that the backlash against Spencer would endanger its student population, Auburn University reneged on the contract last Friday, which left the University vulnerable to an injunction filed by Spencer and an LOS-affiliate and attorney Sam Dickson, who were aided by Kyle Bristow’s Foundation for the Marketplace of Ideas (FMI).

When U.S. District Judge Keith Watkins ruled on Tuesday afternoon that Auburn must allow Spencer to use the space per contract, Spencer and his cohort crowed victory for “free speech.” Although the incident was an embarrassment for University administration, the ruling likely avoided greater violence at the conflict as Spencer had announced his intention to speak openly on campus if the venue could not be secured.

Groups of protesters, including Atlanta “Antifa” (Anti-Fascists, a broad coalition of far-left groups, some espousing violence as a means of opposing far-right political organization) had announced their intention to confront Spencer and his group on University grounds, which would have created a volatile open environment. Instead, the Auburn Police Department, accustomed to controlling stadium crowds of 87,000, was able to contain the passions of both the left and right, as well as the students caught in their midst.

Nevertheless, the event did not pass without some blood spilled. Just before Spencer was scheduled to speak, a scuffle broke out in front of Foy Hall as a verbal confrontation between Seth Miles Waldon, a 27-year-old clerk from Birmingham, and Ryan Matthew King, a 38-year-old Montgomery tattoo artist, turned violent. Police quickly separated the pugilists, though not before video captured the two throwing haymakers and falling over one another as they brawled.

While Waldon’s affiliations were easily discernable due to an embroidered Antifa logo on his coat, it wasn’t until the next day that King’s motivating animus became apparent. Michael Hill, president of the LOS, posted that “One of our compatriots bloodied a big, ugly AntiFa in Auburn last night, was arrested, and fined $500. We are raising funds to offset his fine. At this point (12 noon, 19 April) we have three pledges of $25 each. …We must always be ready to help our brothers and sisters in this fight!--Michael Hill”

Soon after, League members began circulating a meme of Waldon’s mug shot with the caption “Antifa, this was from one blow from one of our men to one of your biggest—See you in Pikeville”. 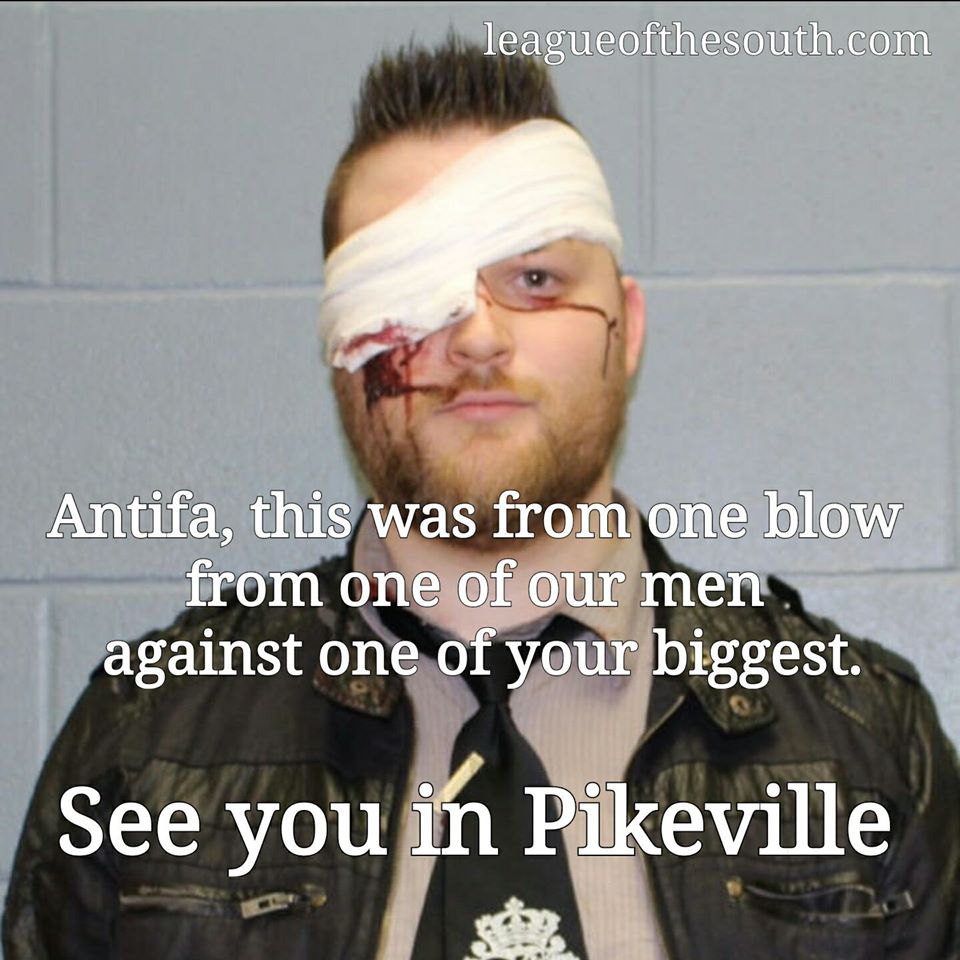 The caption is referencing an upcoming event hosted by the Traditional Worker’s Party (TWP) in Pikeville, Kentucky next month. The Kentucky League of the South is cohosting the event, which Antifa and various other groups have stated they intend to protest.

Although King was the only purported LOS member arrested in Auburn on Tuesday, there were several other past and present League members in the crowd, with the formers greatly outweighing those still involved with Hill and the League.

The most notable LOS affiliates present were William Flowers, Matt Heimbach, and Brad Griffin. The latter two have both been embroiled in widely documented feuds with Michael Hill. 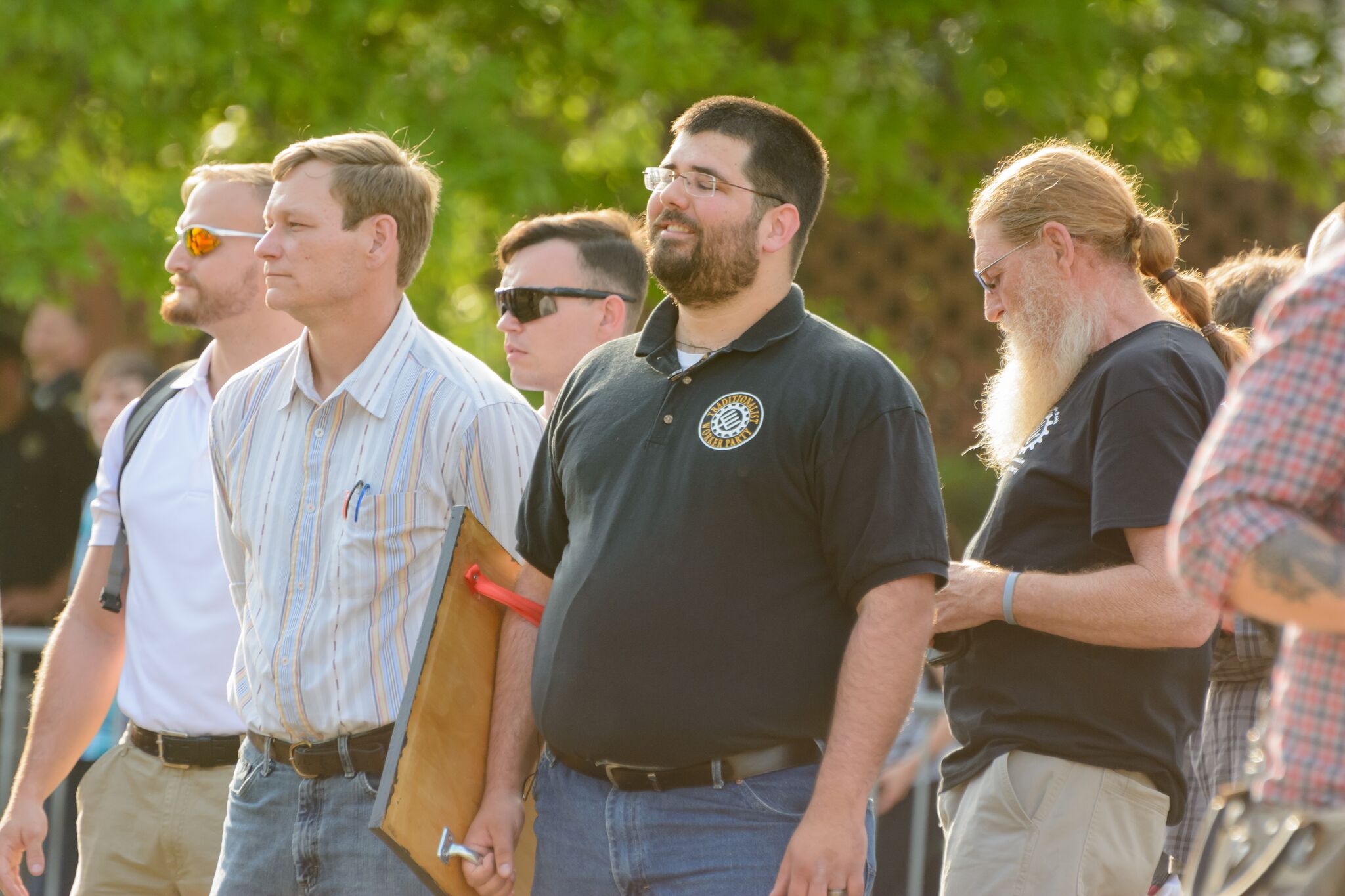 Matthew Heimbach and his shield.

Heimbach, who is no longer a dues paying member of the League, was forced out after sieg-heiling with a group of skinheads in 2013. Heimbach has been involved in actively promoting the Pikeville event lately, and likely attended the Tuesday event in Auburn to bolster his reputation after he skipped an event last June in Sacramento which TWP had planned and promoted. When seven individuals were hospitalized, some with stab wounds following an altercation between TWP, Sacto Skins, and Antifa, Heimbach was halfway across the country, and has been working to rebuild his credibility after many viewed his actions as fleeing a fight.

Flowers, formerly referred to by League members as the “Lion of the South,” abdicated his role as Gorgia LOS state chairman in favor of Heimbach’s TWP. 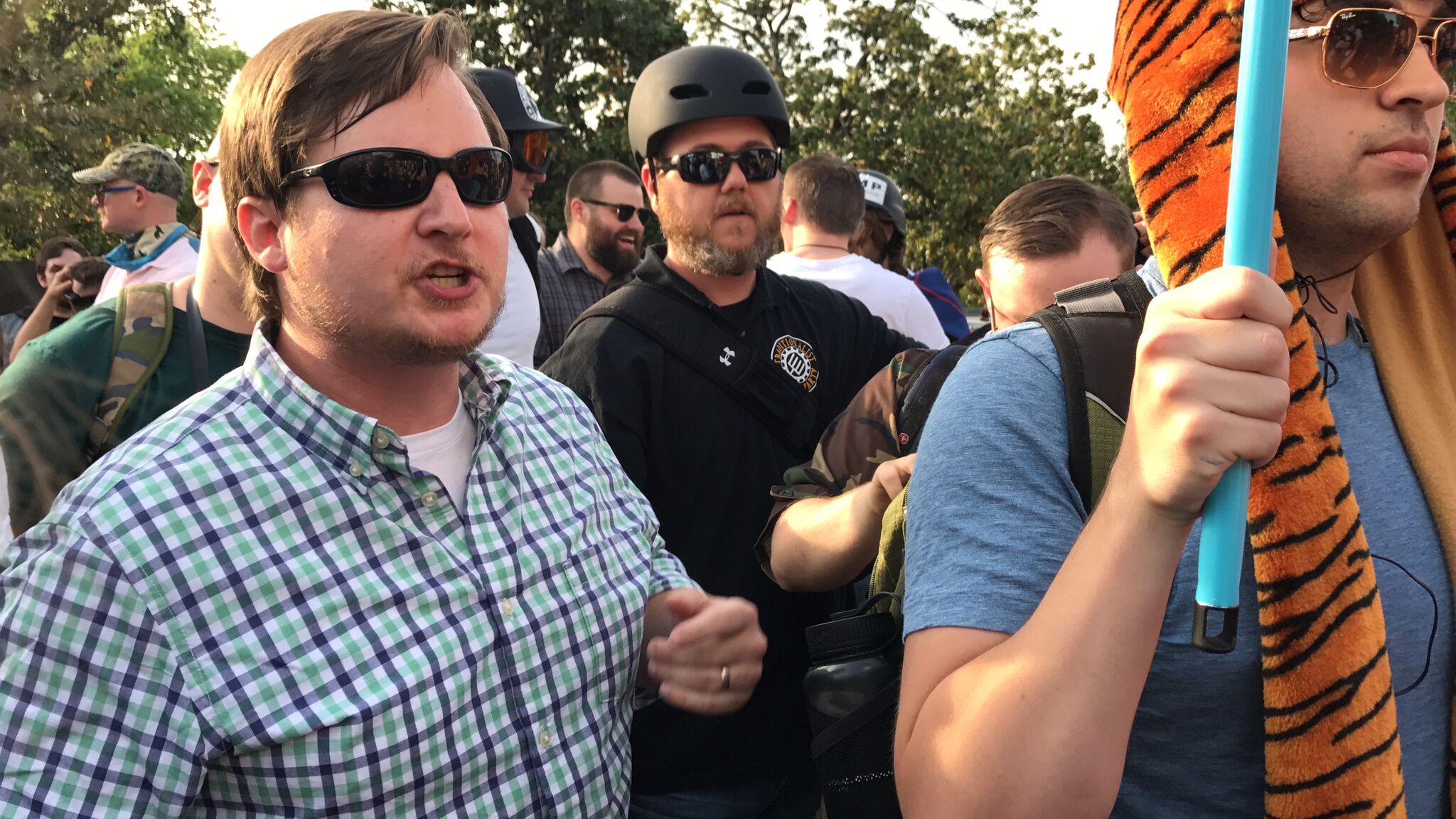 Brad Griffin at an April 18, 2017 rally at Auburn University.

Hill’s tiff with Griffin is due to Griffin’s support of Donald Trump, Richard Spencer, and the “alt-right,” all of which Hill has derided for not being “southern” or Christian enough to pass his litmus test.

Disgraced LOS member Jeremy Walls was also present. Walls was ejected from the League and has continued to feud with well-respected LOS members. 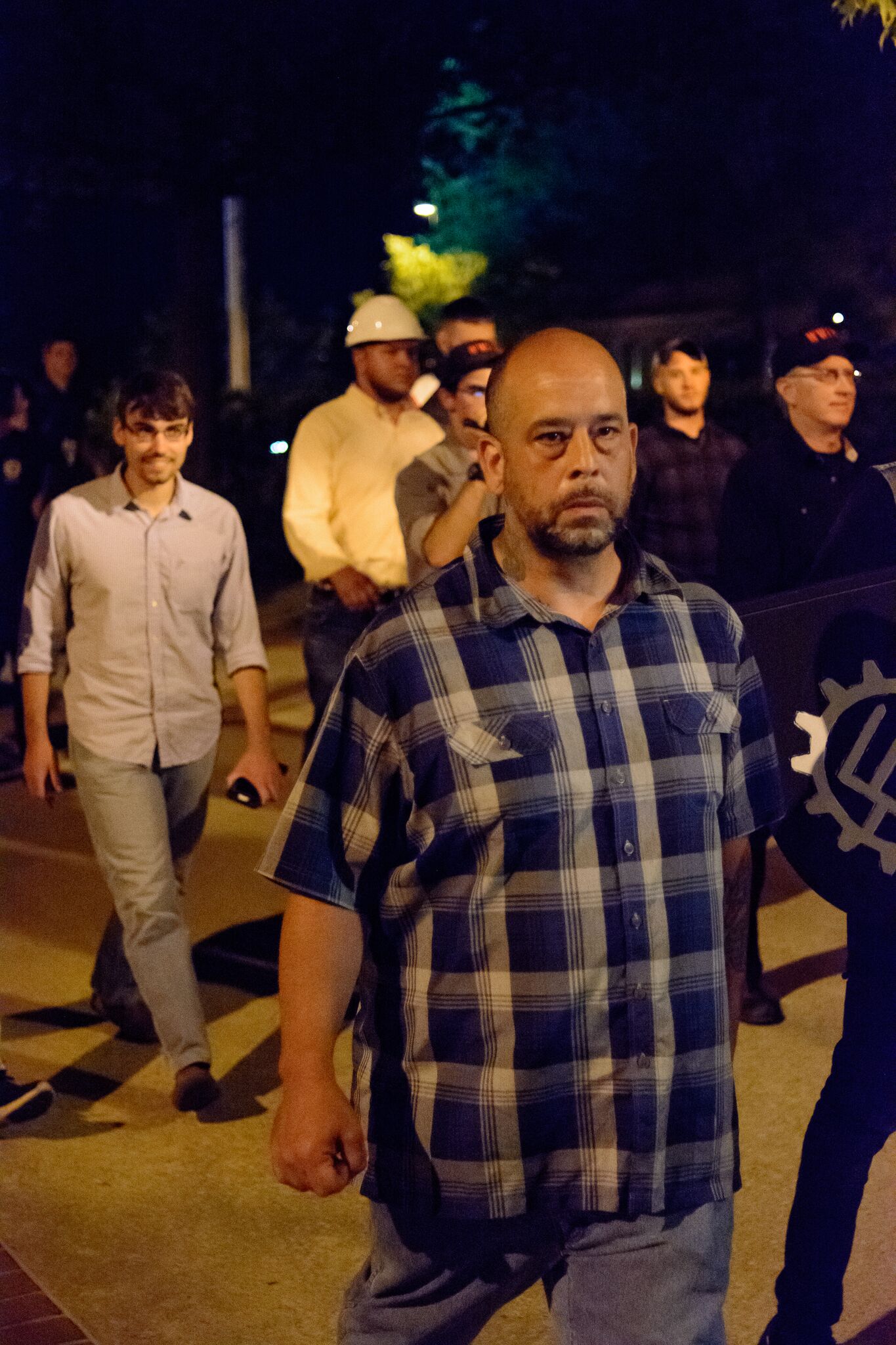 Present around Heimbach, Flowers, and Griffin were two long-time LOS members, Lloyd Caperton and Rayn Owens. Apparently desiring a degree of anonymity, neither were dressed in the League’s signature black polos, but a deeply unbuttoned flannel (Caperton) and, perhaps more inexplicably a TWP shirt (Owens). Hill has not yet commented on one of his members appearing publicly wearing the logo of an avowed socialist organization, something typically seen as anathema to traditional southern society. 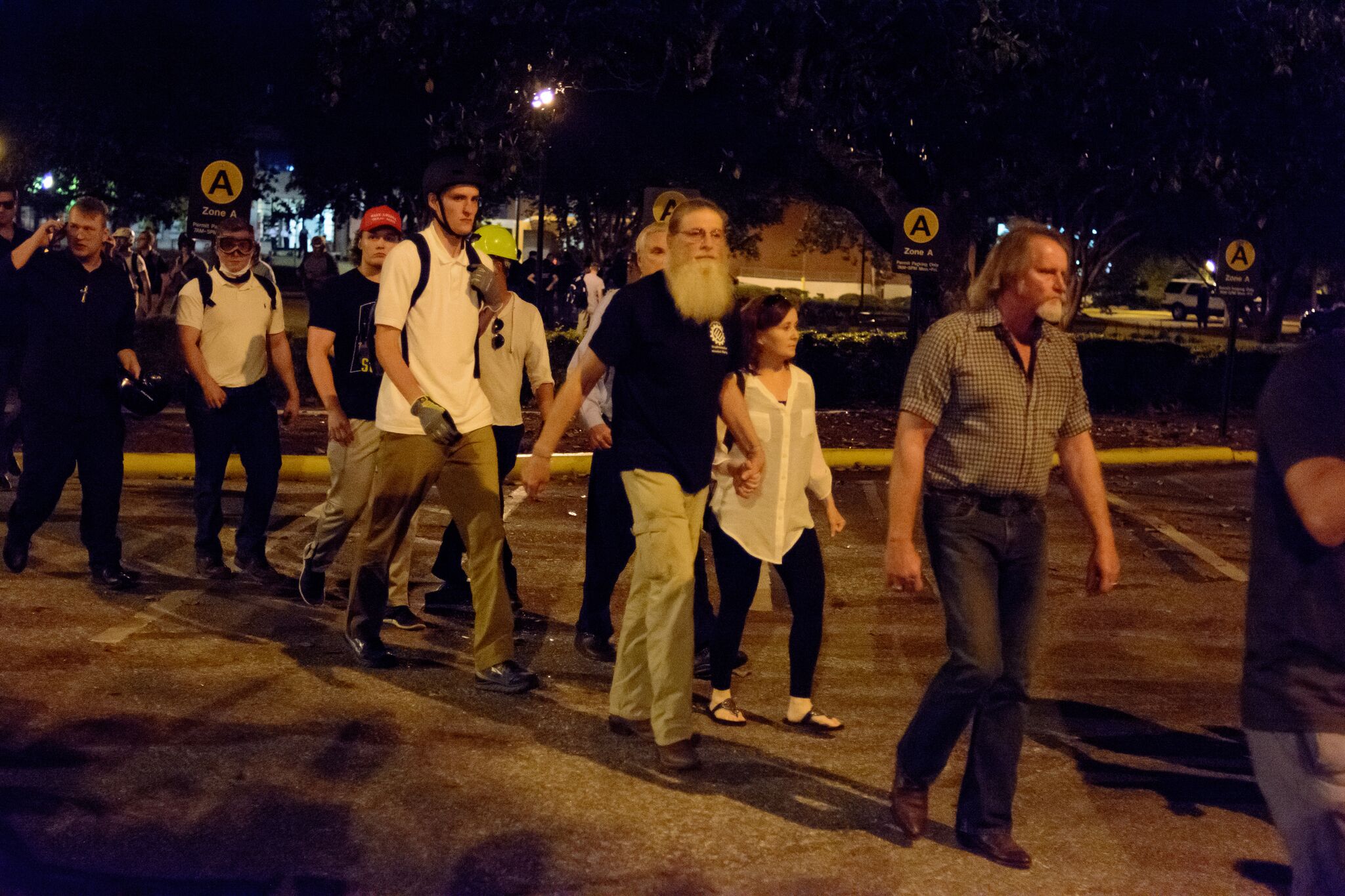 In February of this year, Hill announced the formation of a “Southern Defense Force” (SDF) in order to combat “the Antifa (anti fascists), Black Lives Matter (BLM), and assorted other radical organizations”. While the event in Auburn certainly fits the bill for the SDF’s stated purpose, it does not appear that the presence of League members indicated a concerted effort on the part of Hill or the Alabama chapter’s leadership, all of who were absent on Tuesday.

Instead it seems that a loose-knit group on the periphery of Hill’s League were attracted to the spectacle generated by Spencer and the “alt-right,” and that Hill is now seeking to tout King’s involvement in a street brawl as proof of his enduring relevance.