Behind glass and wood display cases at a conference in Salt Lake City for end-times “preppers,” doomsday worriers and would-be survivalists, a medley of bronze and silver coins were delicately arranged, each snapped tightly into a collector’s case.

The coins were not products from the U.S. Mint, though. Each carried a political message tailored for PrepperCon, the self-proclaimed “premier” gathering held last weekend in Salt Lake City for anyone readying for off-the-grid living—by choice or by necessity.

One coin depicted a skull made to look like George Washington with the inscription: “Paper is Poverty,” a not-so-thinly veiled rebuke of the Federal Reserve and the United States abandoning the gold standard in 1933. Another was engraved with the profile of the Queen of England, again in skeletal relief, with a different message; “Keep Calm and Slave On,” it said.

In the center of the display case, a message in black letters made a bolder political point: “When the dollar collapses, what will you do when they make gold and silver illegal?”

The booth was one of hundreds at the South Towne Expo Center this month in the Salt Lake City suburb of Sandy, Utah, a veritable Comic-Con for the perpetually prepared catering to herbal medicine gurus, solar powered energy specialists, “Zombie War” all-terrain vehicles makers, and, of course, weapons retailers.

A half-dozen vendors advertised the need for precious metals. Some displayed state-of-the-art water filtration systems ready to take home. Flags dangled from booths, too, with distinct right-wing appeal: the Gadsden “Don’t Tread on Me” flag, the Confederate Battle Flag and flags bearing the inscription, “Molon Labe,” a motto favored by militias and those fearful the federal government will rescind or curtail the Second Amendment. It means, “Come and take them” –– a favorite rallying cry of antigovernment extremist groups.

Elsewhere in the cavernous hall, the menacing buzz of stun guns cracked the air as men, women and children passed by booths advertising “military grade protection” from grid-disabling electromagnetic pulses (EMP), a favorite worry of anti-Muslim extremist Frank Gaffney of the the Center for Security Policy.

“Some view emergency preparedness only as the fanatical ambition of those labeled as ‘dooomsdayers’ or the chronically pessimistic,” an official description of the event reads. “In reality, most people are already ‘preppers’ in a small way.”

That much is increasingly true, said Scott Stallings, president and CEO of PrepperCon, now in its third year. While he readily acknowledges that conferences like his can attract radical extremists, many on the radical right, he said he makes sure to ensure radical ideas are not given space.

Perhaps. But there are those on the radical right who have turned politics into a matter of prepping.

At one booth, the Utah-based United Sentinel Militia (USM) handed out materials warning of an “Anti-Socialist, Anti-Communist, and Anti-Globalist” agenda. Its members, one flyer stressed, were “freedom-lovers trying to keep rogues in the government from overthrowing the Constitution!”

Jay Andrews, a USM representative answering questions from a table as two other militiamen listened with stone faces nearby, said the group was a “constitutionalist” militia.

“There’s a lot of concern out there, especially after the last eight years politically,” Andrews said, referring to the Obama administration. “People are just concerned. We offer an outlet to get training, free training, to be that well-regulated arm that the forefathers put in place for when [the government] tries to end the Second Amendment.”

Two bearded men on the other side of the table, attendees carrying bags full of materials, nodded approvingly. And they listened. 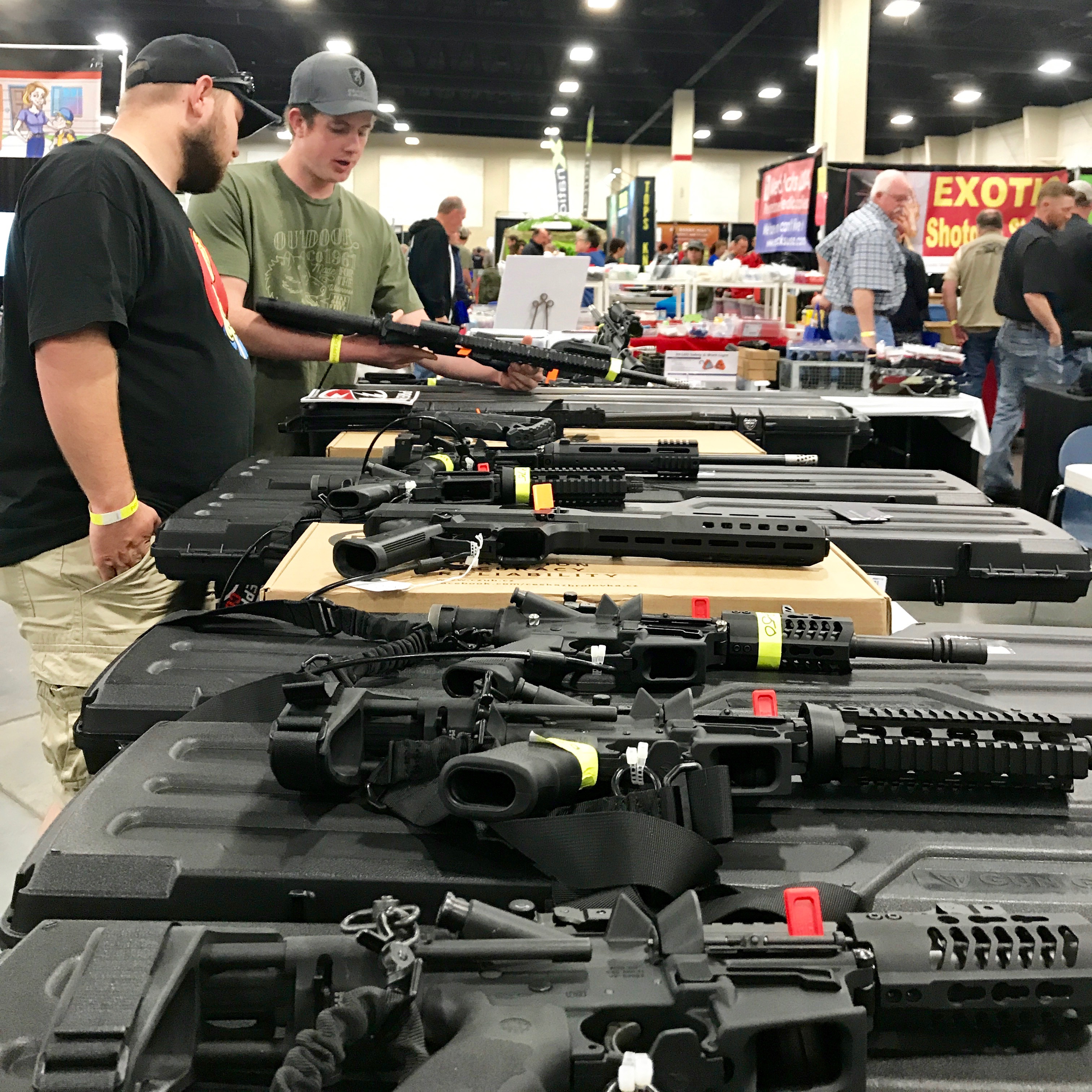 Throughout the 1990s, gun expos and survivalist conferences served as waypoints for radical right conspiracies theories: bizarre ideas of chemicals in the air to control populations, weather controlling machines, hard-right conservative Americans fixated on a coming war where whites would have to defend a homeland.

Sold alongside AR-15s and long-range riflescopes were materials on a range of conspiracy theories about common law juries and “organic citizenry,” a precursor to the modern antigovernment “sovereign citizen” movement.

It was also easy to find vendors discreetly pedaling copies of the anti-Semitic Protocols of the Elders of Zion or John Birch Society pamphlets cautioning of a communist takeover of America. Other pamphlets told of federal prison camps for U.S. citizens being built in the woods. Even copies of books such as Hunter and The Turner Diaries by neo-Nazi National Alliance founder William Pierce–– tracts that inspired Oklahoma City bomber Timothy McVeigh –– were sold at such expos.

But in recent years, prepper conferences have popped up everywhere, from rural Louisiana to metropolises such as Salt Lake City, and they have proven wildly popular. The National Preppers and Survivalists Expo, held last March in Gonzales, Louisiana, drew about 3,000 people, nearly a third of the town's entire population of 9,800.

While racist tracts have all but disappeared as extremist ideas migrate further into the mainstream, the popularity of such conferences almost certainly stems from several causes: uncertain political times, a presidential campaign that exposed toxic tensions dividing the country on fault lines of race and class, and worries about the environment.

Cable television programming has helped, with dozens of shows focusing on the growing subculture of Americans across political lines preparing for the breakdown of civilization, off-the-grid living, food shortages and natural disaster.

“People are scared with today’s political climate that things could happen. You never know if World War III or an EMP event is coming,” Nicole Apelian, an instructor at Prescott College in Prescott, Arizona, and a contestant on the History Channel’s program, Alone, told Hatewatch.

Others have noted a similar spike in appeal for survival preparation on the left, as well. President Trump’s election has led to extreme interest from those far outside the echo chamber of right-wing media.

Evan Osnos at The New Yorker, in an article published a week after the inauguration, described a growing trend of the ultra-rich in New York and Silicon Valley investing in bunkers, often constructed in the shell of an abandoned nuclear missile silo, and other real estate to ready for civil war or, worse yet, the collapse of civilization.

“In recent years survivalism has expanded to more affluent quarters, taking root in Silicon Valley and New York City, among technology executive, hedge-fund managers, and others in their economic cohort,” Osnos wrote. “In private Facebook groups, wealthy survivalists swap tips on gas masks, bunkers, and locations safe from the effects of climate change.”

Many of the vendors at PrepperCon, though, noted that survivalist conferences historically attract people of like-minded politics—conservatives, Republicans and Libertarians.

“The people who come to PrepperCon are very much of a mindset of independence from the government, being able to be self-reliant,’ said Connor Boyack, president of the Libertas Institute. Boyack was selling a series of books including, Latter-Day Liberty: A Gospel Approach to Government and Politics. The book’s dust jacket advertised high-praise from Richard Mack, the former Arizona sheriff whose Constitutional Sheriffs and Peace Officers Association promises to be a “line in the sand” between American Patriots and a federal government turned tyrannical.

There are dangers in the widespread appeal of preparing for the end, though, especially as conferences like PrepperCon risk serving as populist bazaars where conspiracy theories and radical right ideas are free for public consumption without anything to correct the fallacy.

The idea of social collapse, ensuing martial law and the abandonment of Constitutional principles already frightens antigovernment extremists such as the Oath Keepers, a national group of former military and law enforcement personnel. The Oath Keepers' website, no stranger to fearful conspiracy theories, features near daily daily tips on how to survive a national collapse, or, when national affairs turn into a “SHTF” (Shit Hits the Fan) environment.

In one article this month, Oath Keeper Shorty Dawkins warned readers to be prepared for scenarios of “massive, or maybe just regional, grid down.”

“Be prepared,” Dawkins warned. “Better to be prepared than to be one of the victims.”