Joseph Backholm's FRC- and ADF-affiliated Family Policy Institute of Washington is once again leading the charge to deny transgender restroom or locker-room use.

In the bigger scheme of things, Joseph Backholm sees the fight over bathrooms and transgender rights as something of a short-term battle in what he calls a “war” against LGBT rights—but, he predicts, it will prove to be the decisive one.

“Same-sex marriage is temporary,” he recently told participants in a “Gender Revolution” seminar in Tacoma, Washington. “It cannot endure because it’s not true. Now, same-sex marriage might survive America, but it won’t survive.”

He continued: “There is no chance that, 300 years from now, we’ll look back and man will realize gender doesn’t matter. That’s not because we’re smarter. Eventually humanity will discover that is a broken model, it doesn’t work. It is going to go away.”

The ostensible purpose of the seminars—organized by the Family Policy Institute of Washington, founded and overseen by Backholm, who lives in suburban Lynnwood—was to discuss the so-called “gender revolution.” Most of the 90-minute talk given by Backholm in the seminars, held in locations around Washington state, was devoted to attacking the transgender movement by ridiculing claims and assertions about gender identity common among people who choose to identify with a gender other than that which they are born with. 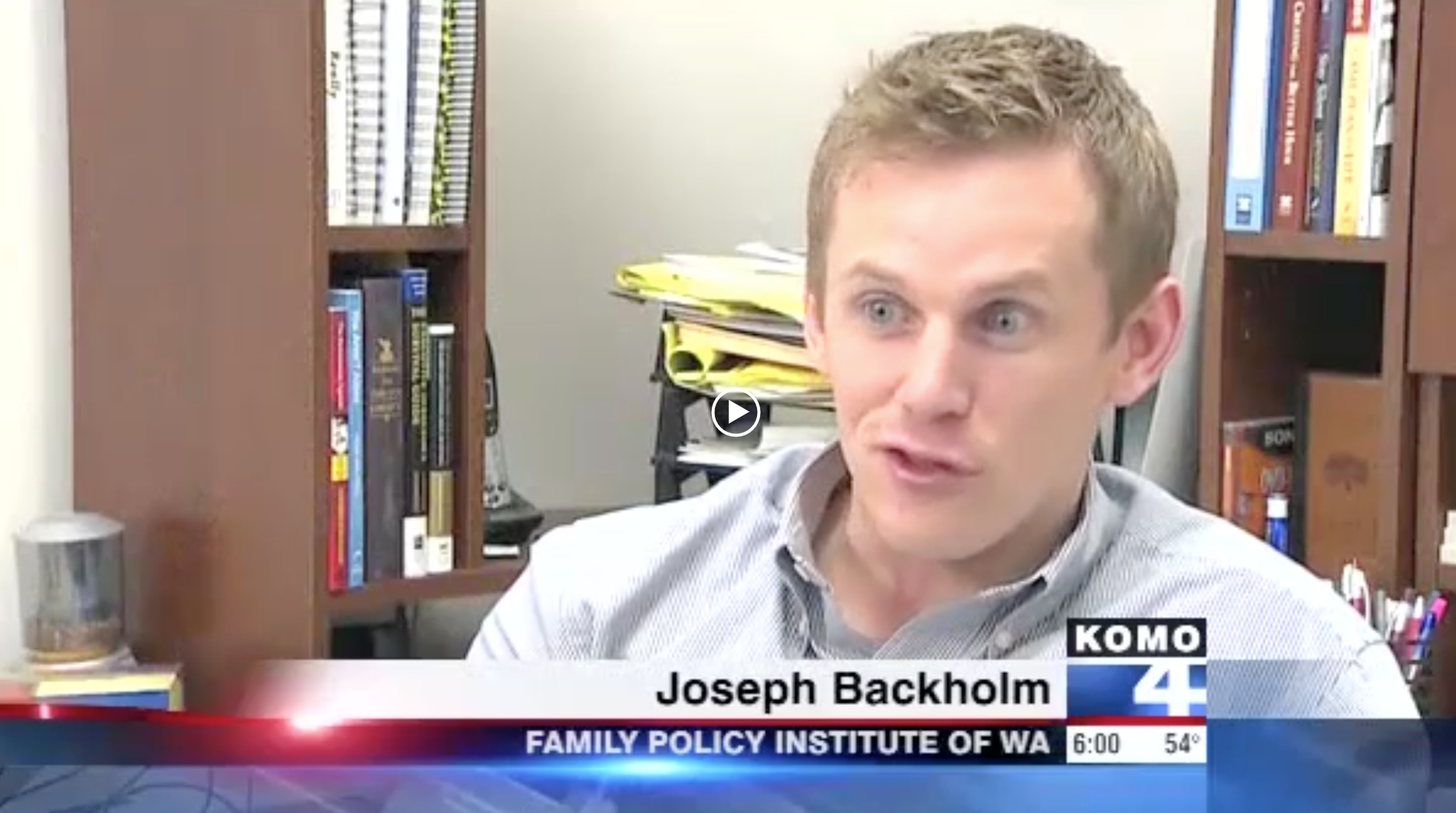 The larger purpose of the seminars, however, became clear as the talk wound on and Backholm began describing the “cultural” part of how people could combat the “gender revolution”—namely, to encourage participants to engage in the political battle over gender by supporting and helping to promote the FPIW’s new anti-transgender “bathroom bill,” Initiative 1552.

The new version goes beyond similar legislation in other states. For example, it provides for civil penalties against school districts that allow minors to be exposed to transgender persons.

This is not FPIW’s first go-round with a “bathroom bill.” It attempted to pass an earlier version of the same legislation, dubbed Initiative 1515, in 2016 during the general election. The measure, however, failed when FPIW was unable to gather enough signatures to make it onto the ballot.

Indeed, the organization has a long history of sponsoring anti-LGBT legislation and policies. It also has a long track record of failure when it comes to persuading voters.

Founded in 2008 by Backholm, the group is the only organization listed by the anti-LGBT hate group Family Research Council as its affiliated “family policy council” for Washington. Backholm and his group are warmly listed as “alliance” members for another anti-LGBT hate group, the Alliance Defending Freedom, which describes how Backholm “is drawing on all of his [ADF] resources and contacts to generate a strong response to the legislature’s new marriage law.”

Backholm’s FPIW has also led the charge on a number of religious-right fronts in the state, including:

Backholm has a history of outrageous and bigoted remarks in support of his agenda as well. He contends that gay relations in general are in violation of “natural and moral laws”: "The idea that all sex is good sex, so long as it involves adults, will not survive because it cannot survive,” he writes at the FPIW site. “The natural and moral laws of the universe are not subject to court ruling or UN resolution. While many within the tolerance movement will go to the grave convinced of the justness of their cause, history will inevitably see it differently.”

Arguing against same-sex marriage, Backholm compared it to the medieval practice of bloodletting:

Redefining marriage in this way, saying that there is no difference between men and women, that it’s not important for children to have both a mother and a father, that’s not just bad policy, it’s wrong in the eternal sense. So because it’s untrue, it will ultimately be proven as untrue and we will come around to recognize the error of our ways. We used to believe in bloodletting as good medical practice, culture has embraced a lot of things temporarily until they realized it’s based on things that are not true. This is one of those, it has to be temporary, not just because I want it to be temporary, but because it’s untrue in the eternal sense.

While organizing for Initiative 1515 in 2016, Backholm quipped to an audience he was preparing for signature gathering: “For the gentlemen, what I would encourage you to do, if you want to be so bold and to make the point, take your petition and stand outside the women's restroom at the mall, and if any of the women don't want to sign it, just go ahead and follow 'em on in,” he said, to laughter. “Maybe this will be a better time to sign our little petition.”

Last year, FPIW was sued by Planned Parenthood to prevent the release of names of people from the University of Washington who had become embroiled in the widely disproven claims about the health-care organization’s purported sale of fetal tissue. FPIW had worked to support the claims of the Center for Medical Progress and its leader, David Daleiden, concocted through spuriously edited video recordings, that fetal tissue sales were being promoted by PP; Daleiden and one of his cohorts is currently under indictment in California for conspiracy to invade privacy.

For now, Backholm’s focus is entirely about passing I-1552, dubbed once again the “Just Want Privacy” initiative, though the rhetoric is once again charged and bigoted. While campaigning for the bill in 2016, Backholm compared trans people to the story of "The Emperor's New Clothes."

"I once thought that story was useful as an illustration but patently absurd," Backholm said. "No parade would gather to celebrate the new clothes of a naked emperor—until Bruce Jenner. And we now have a nation celebrating the fiction that a man is now a woman."

The FPIW's "Gender Revolution" seminars were held in eight locations around the state, including Bothell, Bellingham, Sequim, Spokane and Pasco. The Tacoma seminar featured a discursion on a component of FPIW’s campaign against transgender acceptance in the state’s schools, attacking the Washington Office of Superintendent of Public Instruction over new learning standardssaying that kindergarten students should "understand there are many ways to express gender," third graders should learn that "gender roles can vary considerably" and "understand [the] importance of treating others with respect regarding gender identity," and fourth graders will learn the definition of sexual orientation.

As Backholm made clear, the FPIW believes that this constitutes an attack on conservative students: "It is frightening to think that students who hold traditional beliefs about gender and sexual identity may have to choose between accepting politically correct talking points or failing assignments and being ostracized by school administrators."

FPIW promoted the seminars with provocative taglines: “We celebrate ‘Women’s Day’, but no one can define what a woman—or a man—actually is anymore” and “[W]hy is my child’s school working so hard to convince them there are 56 genders and you can be any gender you want?”

During the seminar, Backholm suggested a common conspiratorial explanation of the progression of LGBT rights to feature transgender concerns. He described how, once same-sex marriage became the law of the land with the Supreme Court’s 2014 Obergfell v. Hodges ruling, LGBT organizers immediately began moving toward “comprehensive federal LGBT non-discrimination protections,” and the cause of transgender rights became a central player in their agenda. “They needed a new victim class,” Backholm said.

All this, he argued, was simply the product of a long moral slide: “The thing that binds this all together is the desire to create an environment in which there are no rules,” he told the audiuence.

Backholm also proffered his views on the nature of transgender identification, claiming that LGBT people have simply slapped a trendy new label on something mundane: “All of this begins to make sense when you realize that when they use the word gender, what they really mean is personality,” he said. “The discussion about gender is really a conversation about personality.”

He urged seminar-goers to get involved on three levels—interpersonally, at their churches, and politically. He described the churches as being “at war, for sure,” and urged everyone at the seminar to help organize support for the drive to gather signatures for I-1552.

“Our kids are just flat-out being lied to, about stuff that’s going to destroy their mind, spirit, soul and body,” he warned. “We should be a place equipped to patch that up when it happens, but we should also be a place that’s involved on the front end of that, so that we can prevent the harm from happening in the first place.”

The larger enemy, as Backholm acknowledged, was the “LGBT agenda,” but added: “That’s not our primary objective right now. There’s hotter irons in the fire. It’s not the root, it’s the fruit of the tree.”