Alt-right fans charged with felonies after three-month investigation finds they prepared to cause mayhem at Yiannopoulos speech protest Jan. 20.

After a three-month investigation that entailed combing through hours’ worth of video recordings, the King County Prosecutor’s office in Seattle announced this week that it was filing felony charges against a married couple accused of shooting a man involved in the Jan. 20 protests outside a Milo Yiannopoulos speech on the University of Washington campus.

Elizabeth Hokoana and her husband, Marc Hokoana, both 29, were charged with first-degree assault in the shooting of Joshua Dukes, a 31-year-old computer programmer who had been acting as a peacekeeper during the protest, which featured multiple violent melees. Marc Hokoana had been a participant in several of them, and according to the charging papers, had been dosing protesters with squirts from a small pepper-spray gun.

During one of these brawls, authorities say, Elizabeth “Lily” Hokoana pulled a Glock semiautomatic pistol from her coat and shot Dukes once. Dukes spent several weeks in the hospital recovering from the wound, which damaged several internal organs.

The charging papers claim that, the day before the event, Marc Hokoana had messaged a friend on Facebook: “I can’t wait for tomorrow. I’m going to the milo event and if the snowflakes get out off hand I’m going to wade through their ranks and start cracking skulls.”

The friend asked him whether he was “going to carry.” Hokoana replied: “Nah, I’m going full melee.” He then added: “Lily … is.”

Marc Hokoana had messaged Yiannopoulos via Facebook from the protest, saying his “Make America Great Again” hat had been stolen. He also asked Yiannopoulos for a new hat, but the alt-right provocateur never replied.

Video recorded by Hatewatch during the protests showed Hokoana acting as a provocateur throughout the evening, egging protesters on and trying to provoke them by demanding his hat back.

The charging papers say a witness identified as “B.F.” described his activities throughout the evening: “B.F. stated that the individual kept going over to the group of protesters and agitating the group by calling them snowflakes, libtards and saying that (Trump) was their president. B.F. stated that the man seemed to be there only to provoke the crowd.” 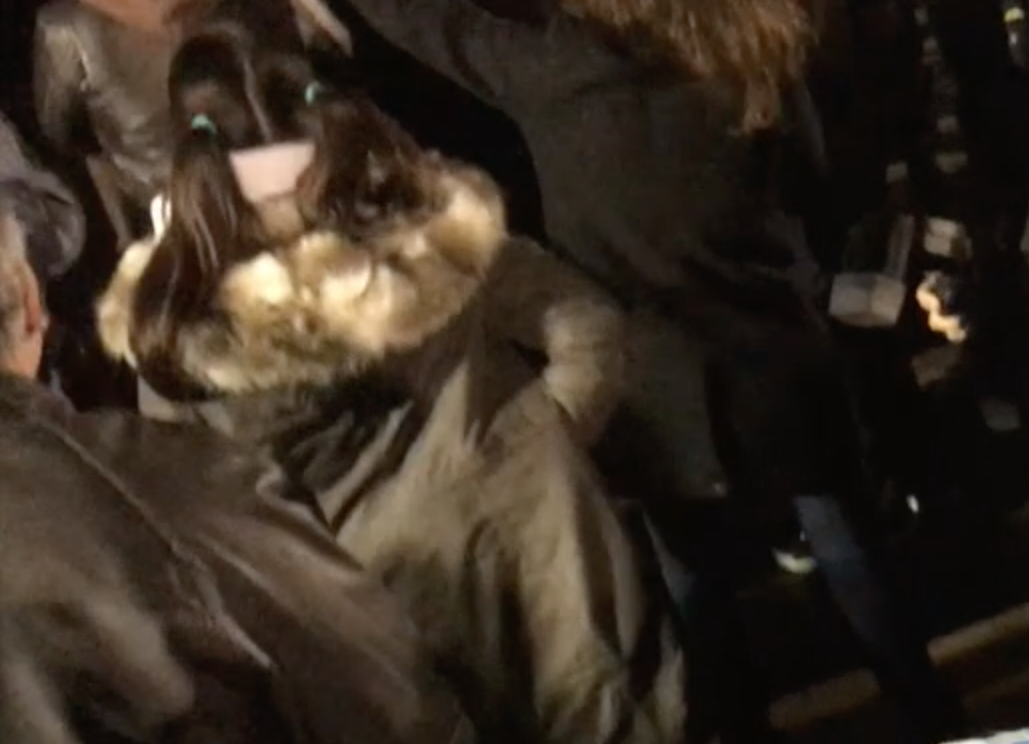 In a still taken from the video (about 2:00), Elizabeth Hokoana can be seen reaching inside the back of her coat.

A key portion of the Hatewatch video proved important in establishing the charges against Elizabeth Hokoana. Recorded nearly 30 minutes before the shooting, she can be seen, wearing a two-toned winter coat and pigtails, approaching the scene where a young Milo supporter had been hit with a blue paint ball by black-clad protesters. As the young man’s father pulls him away, she can be seen opening her coat and reaching behind her inside it, appearing to stand guard as her husband confronts the protesters. (He shortly afterward emerged, spoke briefly with his wife, and embraced the young man with the paint on his face.)

A detective cited in the charging papers said the movement “was consistent with a person who was attempting to pull a concealed pistol from a holster.”

Later in the Hatewatch video, Marc Hokoana, now wearing a bright yellow ballcap, can be seen chanting with a crowd of Yiannopoulos fans waving a banner bearing the image of Pepe the Frog, the hate-symbol mascot of the alt-right, and then briefly conferring with friends wearing red "Make America Great Again" ballcaps. In the final frame of that video — taken less than a minute before the shooting — the victim, Josh Dukes, is comes into view.

The Seattle Times reports that further video evidence found Marc Hokoana attempting to keep his wife in check, telling her to “calm down” and “don’t shoot anyone.”

The Hokoanas’ lawyers maintained their innocence. “We have provided the police and the prosecution evidence showing that our clients acted lawfully in defense of others,” a joint statement said. “The accuser, Joshua Dukes, has repeatedly stated that he does not want this to go through the criminal-justice system. We are disappointed that the prosecution has decided otherwise. We look forward to presenting our case to a jury and we anticipate an acquittal.”

Joshua Dukes, who was eventually released after weeks in the hospital since the bullet entered his stomach, traveled up his chest and lodged in his back, has been pleading for “restorative justice” in the case.

“Being shot was devastating for Mr. Dukes, his family, and his community,” his attorney, Sarah Lippek, told reporters. “The Hokoanas harmed many people by their violent actions. Mr. Dukes hopes that the defendants will take accountability for shooting him, for taking guns and other weapons into already unstable circumstances, and for their involvement in escalating violence in the situation. It is crucial for the Hokoanas to understand the damage they caused, in order to reach accountability and resolution for this violence.”

Yianniopoulos attempted to claim in his speech inside the hall that the roles were reversed — that it had been one of his alt-right fans who had been shot by an antifascist. Breitbart News and the Daily Caller both reported the same. The Daily Caller wound up writing a story that corrected the facts but, notably, did not explain that it was a correction of the site's previous reportage. Breitbart, meanwhile, not only never bothered to correct its reportage, it instead (without a hint of irony) accused the UW president of changing her story about the event, and left the shooting utterly unmentioned in its subsequent reportage.