A satirical religion with a frog-headed god has become a favorite new way for white nationalists to troll liberals, while spreading their meme-driven strategy. 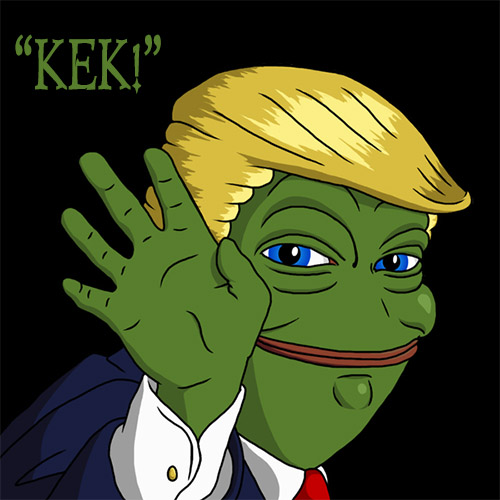 You may have seen the name bandied about on social media, especially in political circles where alt-right activists and avid Donald Trump supporters lurk. Usually it is brandished as a kind of epithet, seemingly to ward off the effects of liberal arguments, and it often is conveyed in memes that use the image of the alt-right mascot, Pepe the Frog: “Kek!”

Kek, in the alt-right’s telling, is the “deity” of the semi-ironic “religion” the white nationalist movement has created for itself online – partly for amusement, as a way to troll liberals and self-righteous conservatives both, and to make a kind of political point. He is a god of chaos and darkness, with the head of a frog, the source of their memetic “magic,” to whom the alt-right and Donald Trump owe their success, according to their own explanations.

In many ways, Kek is the apotheosis of the bizarre alternative reality of the alt-right: at once absurdly juvenile, transgressive, and racist, as well as reflecting a deeper, pseudo-intellectual purpose that lends it an appeal to young ideologues who fancy themselves deep thinkers. It dwells in that murky area they often occupy, between satire, irony, mockery, and serious ideology; Kek can be both a big joke to pull on liberals and a reflection of the alt-right’s own self-image as serious agents of chaos in modern society. 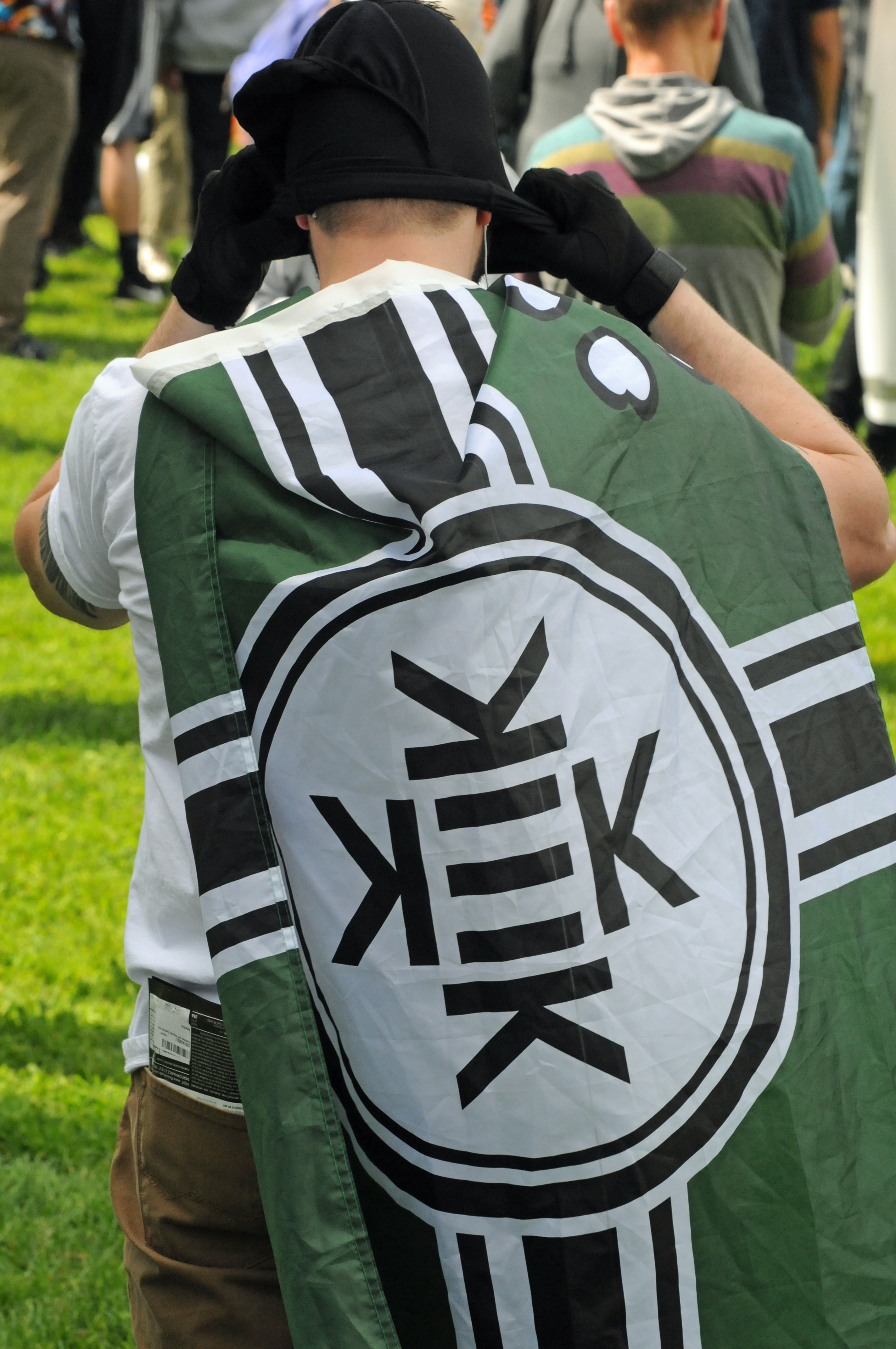 A 'Kekistan' banner was part of the scene at the alt-right "free speech" rally April 15 in Berkeley, CA.

Most of all, Kek has become a kind of tribal marker of the alt-right: Its meaning obscure and unavailable to ordinary people – “normies,” in their lingo – referencing Kek is most often just a way of signaling to fellow conversants online that the writer embraces the principles of chaos and destruction that are central to alt-right thinking, as it were.

The name, usage, and ultimately the ideas around it originated in gaming culture, particularly on chat boards devoted to the World of Warcraft online computer games, according to Know Your Meme. In those games, participants can chat only with members of their own faction in the “war” (either Alliance or Horde fighters), while opposing players’ chats are rendered in a cryptic form based on Korean; thus, the common chat phrase “LOL” (laugh out loud) was read by opposing players as “KEK.” The phrase caught on as a variation on “LOL” in game chat rooms, as well as at open forums dedicated to gaming, animation, and popular culture, such as 4chan and Reddit – also dens of the alt-right, where the Pepe the Frog meme also has its origins, and similarly hijacked as a symbol of white nationalism.

At some point, someone at 4chan happened to seize on a coincidence: There was, in fact, an Egyptian god named Kek. An androgynous god who could take either male or female form, Kek originally was depicted in female form as possessing the head of a frog or a cat and a serpent when male; but during the Greco-Roman period, the male form was depicted as a frog-headed man.

More importantly, Kek was portrayed as a bringer of chaos and darkness, which happened to fit perfectly with the alt-right’s self-image as being primarily devoted to destroying the existing world order.

In the fertile imaginations at play on 4chan’s image boards and other alt-right gathering spaces, this coincidence took on a life of its own, leading to wide-ranging speculation that Pepe – who, by then, had not only become closely associated with the alt-right, but also with the candidacy of Donald Trump – was actually the living embodiment of Kek. And so the Cult of Kek was born.

Constructed to reflect alt-right politics, the online acolytes of the “religion” in short order constructed a whole panoply of artifacts of the satirical church, including a detailed theology, discussions about creating “meme magick,” books and audio tapes, even a common prayer:

Our Kek who art in memetics

Hallowed by thy memes

Thy will be done

In real life as it is on /pol/

Give us this day our daily dubs

And forgive us of our baiting

As we forgive those who bait against us

And lead us not into cuckoldry

But deliver us from shills

For thine is the memetic kingdom, and the shitposting, and the winning, for ever and ever.

Kek “adherents” created a whole cultural mythology around the idea, describing an ancient kingdom called “Kekistan” that was eventually overwhelmed by “Normistan” and “C---istan.” They created not only a logo representing Kek – four Ks surrounding an E – but promptly deployed it in a green-and-black banner, which they call the “national flag of Kekistan.”

The banner’s design, in fact, perfectly mimics a German Nazi war flag, with the Kek logo replacing the swastika and the green replacing the infamous German red. Alt-righters are particularly fond of the way the banner trolls liberals who recognize its origins.

In recent weeks, alt-right marchers at public events planned to create violent scenes with leftist, antifacist counterprotesters and have appeared carrying Kekistan banners. Others have worn patches adorned with the Kek logo.

Besides its entertainment value, the “religion” is mainly useful to the alt-right as a trolling device for making fun of liberals and “political correctness.” A recent alt-right rally in support of adviser Stephen Bannon in front of the White House, posted on YouTube by alt-right maven Cassandra Fairbanks, featured a Kekistan banner and a man announcing to the crowd a “Free Kekistan” campaign.

The main point of the whole exercise is to mock “political correctness,” an alt-right shibboleth, and deeply reflective of the ironic, often deadpan style of online trolling in general, and alt-right “troll storms” especially. Certainly, if any “normies” were to make the mistake of taking their “religion” seriously and suggesting that their “deity” was something they actually worshipped, they would receive the usual mocking treatment reserved for anyone foolish enough to take their words at face value.

Yet at the same time, lurking behind all the clownery is an idea that alt-righters actually seem to take seriously: Namely, that by spreading their often cryptic memes far and wide on social media and every other corner of the Internet, they are infecting the popular discourse with their ideas. For the alt-right, those core ideas all revolve around white males, the patriarchy, nationalism, and race, especially the underlying belief that white males and masculinity are under siege – from feminists, from liberals, from racial, ethnic, and sexual/gender minorities.

In such alt-right haunts as Andrew Anglin’s neo-Nazi website The Daily Stormer, references to the Kek “religion” have become commonplace, and Kek as the “god of chaos” has been credited at the site, besides electing Trump, with killing over 30 people in a fire at an Oakland artists’ collective. A very early Stormer disquisition on Kek by “Atlantic Centurion,” published in August 2015, explores the many dimensions of the Kek phenomenon in extensive theological detail, connecting their belief system to Buddhism and other religions.

It is the Kek the Bodhisattva who can teach our people these truths, if we are willing to listen and to commit ourselves to the generation of meme magick through karmic morality and through the mantra of memes. By refusing to c--- and by rejecting the foul mindsets of our invaders and terrorizers, we will move the nation away from its suffering under the pains of hostile occupation, and closer and closer to its final rebirth. If instead, our people c--- and adopt the foul mindsets, they will generate not Aryan karma but further mosaic samsara.

The trve power of skillful memes is to meme the karmic nation into reality, the process of meme magick. By spreading and repeating the meme mantra, it is possible to generate the karma needed for the rebirth of the nation.

Anglin himself makes frequent references to Kek, making clear that he too subscribes to the underlying meme-spreading strategy that the “religion” represents. Describing a black artist’s piece showing a crucified frog – which appeared to Anglin to be a kind of blasphemy of the Kek deity – he declared that  “there’s some cosmic-tier stuff going on out there.” Another post, published in March, was headlined: “Meme Magic: White House Boy Summoned Spirit of Kek to Protect His Prophet Donald Trump.”

Anglin devoted the post to explaining a teenager’s use of an alt-right hand signal while meeting Trump, concluding that “the only possibility here is that this is an example of Carl Jung’s synchronicity – seemingly acausal factors culminating to create an event based on its meaning. But it is not really acausal – it merely appears that way to the non-believer. It is our spiritual energies, channeled through the internet, that caused this event to manifest,” he wrote. “It is meme magic.”

Whether they really believe any of this or not, the thrust of the entire enterprise is to mock everything “politically correct” so loudly and obtusely – and divertingly – that legitimate issues about the vicious core of white male nationalism they embrace never need to be confronted directly. The alt-right’s “meme war” is ultimately another name for far-right propaganda, polished and rewired for 21st-century consumers. The ironic pose that Kek represents, and accompanying claims that the racism they promote is just innocently  meant to provoke, in the end are just a façade fronting a very old and very ugly enterprise: hatemongering of the xenophobic and misogynistic kind.