“What brings us together is that we are white, we are a people, we will not be replaced,” Spencer told the torch-bearing crowd at a rally in Charlottesville, Virginia, about 100 miles from the nation’s capitol.

“You will not replace us. You will not destroy us,” said Spencer, a University of Virginia graduate credited with coining the term “Alt-Right” and currently viewed as one of the white nationalist movement’s most-prominent figureheads.

“You cannot destroy us,” Spencer shouted to the cheering crowd. “We have awoken. We are here. We are never going away.”

The rally and a smaller follow-up gathering ostensibly were held to show opposition to the city’s planned removal of a statute of Confederate General Robert E. Lee and support for Republican gubernatorial candidate Corey Stewart, the Washington Post reported.

Stewart, the former chairman of Donald Trump’s campaign in Virginia, apparently wasn’t in attendance. But he has been vocally opposed to removal of Confederate flags and Confederate War monuments, claiming he’s pushing back against “historical vandalism” and “political correctness,” the Post reported.

With the Virginia gubernatorial primary set for June 13, the rallies were criticized by four other candidates vying to succeed Democrat Gov. Terry McAuliffe.

His fellow Republican, state senator Frank W. Wagner, said in a statement to the Post: “These actions are totally unacceptable. These people are racists. They don’t represent Virginia values. I condemn their actions and beliefs.”

The Charlottesville rallies were the latest in a series of events and speeches this spring — from Berkeley, California, to Auburn, Alabama, to New Orleans and elsewhere — where the alt-right forces, including Spencer, have attempted to galvanize their power on the political stage, sometimes using “free speech” as a platform, to lure and expose young people to white nationalist beliefs and show support for President Trump.

“You cannot destroy us. We have awoken,” Spencer said of the white nationalist movement at a second, smaller rally in Charlottesville. “We are here. We are never going away.”

While racism may not be overt, its tenets seem just under the surface of the alt-right’s far-right ideals embracing preservation of Western civilization, opposing immigration and always talking about “white identity” — a calling card for David Duke and many hardcore racists.

So that may be why, after the Charlottesville rally, Spencer picked up and re-tweeted a tweet from Duke, the notorious former KKK leader, who said: “Modern day leftists have turn our younger generation into the imaginary boogieman they have always feared aka openly proud White men/women.” 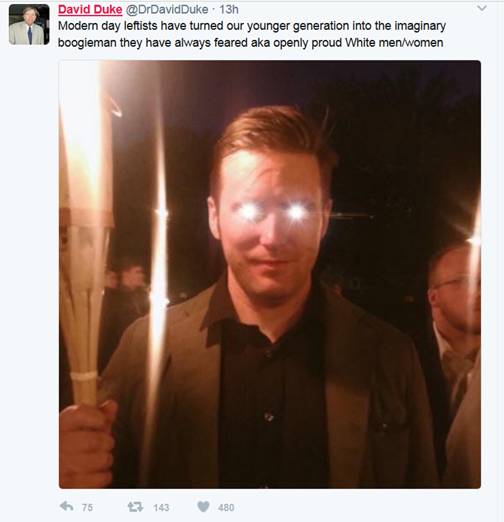 Spencer also re-tweeted another Duke comment where he claimed when black people “burn buildings and attack white people, they are called “peaceful protesters,” but when people like Spencer hold rallies supporting alt-right views and Confederate statutes they are labeled a “mob of torching-wielding supremacists.”

Duke, it seems, apparently views Spencer and the alt-right movement as a re-packaging of the racial extremism he has embraced for years. Last year, in announcing what turned out to be a failed bid for the U.S. Senate, Duke said he was “overjoyed to see Donald Trump and most Americans embrace most of the issues I’ve championed for years.”