May 20th marked 156 years since the North Carolina state legislature voted to join other southern states in seceding from the United States.

Alamance County Taking Back Alamance County (ACTBAC NC), a fledgling neo-Confederate group based in North Carolina, celebrated by hosting a “Confederate Memorial Day Celebration” this Saturday in Graham, the county seat. Beforehand, ACTBAC NC leader Gary Williamson invited his followers to come and “stand against the devil himself.” 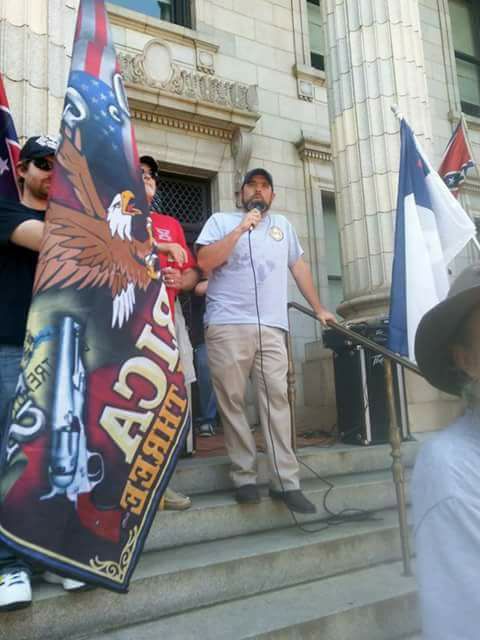 ACTBAC NC leader Gary Williamson on the courthouse steps May 20.

Approximately 100 supporters showed up to register their stance on the debate that has surrounded the prevalence of Confederate iconography in public squares across the South. Some dressed in butternut and gray reenactment uniforms, while others, members of the “Alamance County Regulators,” stood ready in contemporary tactical gear. Alamance County Sheriff Terry Johnson instructed several ACTBAC NC members who arrived with muskets to return the weapons to their vehicles. 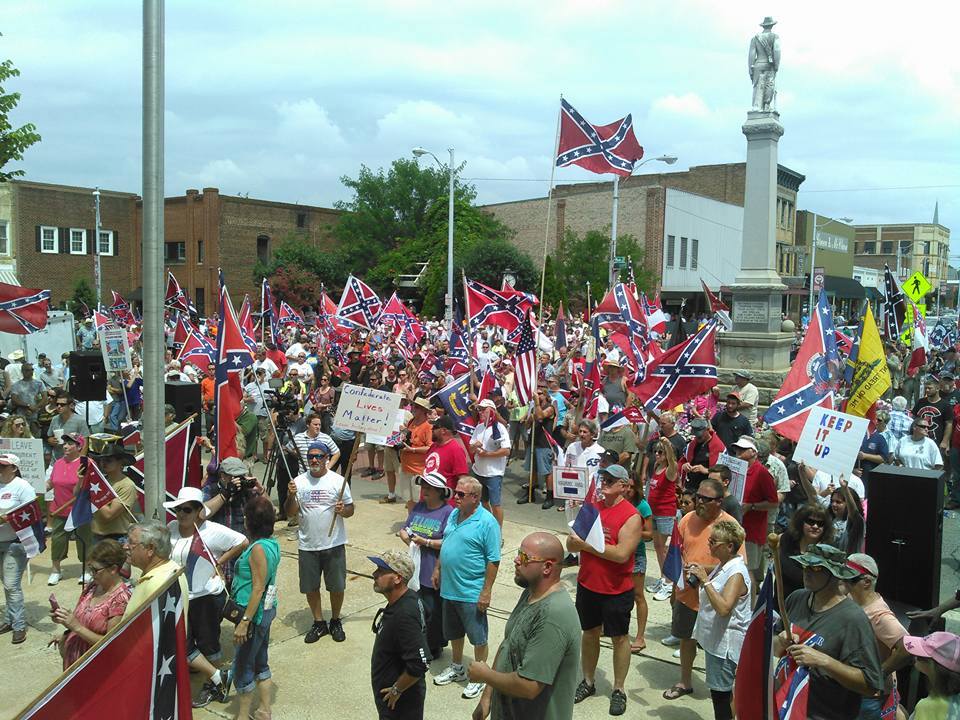 The most notable attendee was Kyle Rogers, former web-master for the Council of Conservative Citizens (CCC), who has shied away from public protests since the national media highlighted the CCC website’s role in the radicalization of Dylann Roof. Rogers currently finds work hawking flags from the far right alongside rainbow-colored Gay Pride flags, including one emblazoned with the Gadsden Flag rattlesnake “Don’t Tread On Me” logo, on his website Patriotic Flags. Other protesters from the far-right included members of the League of the South and Identity Evropa. Jon Pressley, purportedly a member of Blood & Honour, touted the event beforehand.

In the end, five individuals were arrested at the event, including two attendees who strung an Identity Evropa banner from a nearby building. Michael Joseph Chesny and Joseph Warner Manning were booked on trespassing charges. Three counter-protesters from Triangle Industrial Workers of the World (IWW), a local chapter of the international labor union, were arrested on trespassing and destruction of real property

The tension and arrests are not surprising given Williamson’s tone online prior to the event. When a member on the group’s Facebook page posed the question “What would you like us to do if the so called over privilege Antifa shows up,” Williamson responded by stating:

“I do not want them near us..... they are not allowed on the courthouse property. They can stand in on coming traffic if they want and that will be just fine with me. None of the local business want them there and they will be run off from around court square anywhere they go. If not they will be charged with trespassing. So if they insist on causing the community issues with traffic , the police will be there and then you guys will be there... MOVE THEM OUT!!!”

Williamson also indicated that he had “just returned from the disgusting city of New Orleans where tyranny and corruption have become law. Our monuments are being stole [sic] under the darkness of night…”

Williamson’s fears aside, Alamance County has already faced the question over the fate of Confederate monuments within its borders.

In 2015, a group named “Concerned Citizens of Alamance County” announced their intention to ask the local county commission to remove a monument of a north-facing Confederate soldier. The commissioners declined, “fearing removing it would only cause division when communities are in need of unity.”

ACTBAC NC was not formed for another year, when it was started out of a small collective’s ire at the sale of a building to serve as a mosque for the local Muslim community.

ACTBAC NC has struggled to develop a consistent message or state a clear cause d’etre since it abandoned the overtly anti-Muslim rhetoric it championed during the 2016 Presidential election.

The group’s Facebook page has been scrubbed of the most inflammatory material against Muslims and Williamson has stated that critique of his group is “basically blasphemy.” The group’s “About” section on Facebook states that ACTBAC NC stands “not just to support our precious Confederate Flag but to support our rights as American Citizens and at any point and time our Religion, our morals, our Heritage, our well being as a Country is takin away we need to stand up and at some point take matters into our own hands!!”

ACTBAC NC presently resides firmly in the “flagger” camp of the Neo-Confederate community, along with groups like the Va Flaggers and Sons of Confederate Veterans, who concern themselves mostly with “heritage violations,” and who fundraise to install flag poles with the Confederate Battle Flag (CBF) and other flags of the Confederacy.

Nevertheless, ACTBAC does have shared membership with more openly militant Neo-Confederate groups like the League of the South (LOS). South Carolina’s LOS Chairman, Pat Hines, apparently left the following comment on a news article regarding ACTBAC NC’s antics this weekend:

“The opposition to the pro-south groups are Judeo-Marxts [sic] working themselves up to be as deadly as their genetic grandfathers, the Bolsheviks. They support the murders of all southern whites and the destruction of our monuments."

Despite his fiery language online prior to Saturday’s event, when interviewed afterward, Williamson simply stated that “all went great. It was beautiful.”

Williamson’s terse response to reporters is consistent with his desire to maintain tight lips amongst his supporters. On the same Facebook event page, Williamson warned his flock, “A very important rule that we follow is, no one and I MEAN NO ONE talks to the media. The local papers are not our friend, news channels are not our friend, and we are not hear [sic] to become stars.”

In spite of Williamson’s proscription against media interviews on Saturday, one woman who is listed as having attended the event on ACTBAC’s Facebook page, was willing to be interviewed. Regarding ACTBAC NC’s stance on the monuments, Denice Friedman stated that “We believe in keeping all history all, the good, the bad and the ugly,” and that Saturday’s event “…was never started as a hate event like our opposition portrays us. Everyone is invited.”

Regarding ACTBAC NC’s plans for the future, their Facebook page is also littered with references to the ongoing debate in Charlottesville, Virginia over that city’s attempt to remove monuments dedicated to the Confederacy. After news broke that City Councilor Bob Fenwick intends to vote for the removal in an upcoming budget work session.  Williamson posted “We are going back to Virginia!”