Since last fall, the Nationalist Socialist Movement (NSM) has attempted to hide its admiration for Adolf Hitler by removing the swastika from NSM uniforms, banners, patches and shields.

“We are enacting another change...to best launch our party into the mainstream and out of the so-called fringes.... [of] American politics,” NSM leader Jeff Schoep wrote in a public announcement.  This decision coincided with Schoep changing the name of his coalition Aryan Nationalist Alliance to the Nationalist Front (NF), a move more than likely encouraged by Matthew Heimbach, leader of the white nationalist group Traditionalist Worker Party (TWP).

But there’s a problem: NF has failed to shut its open-door policy to hood-wearing Klansmen and women.

On May 20, Schoep joined the East Coast Knights of the Ku Klux Klan’s (ECK) first cross-burning shindig in southeastern Pennsylvania for the year. His decision to drive all the way down from Detroit was probably influenced by his desire — and Heimbach’s — to pull Klan groups into their fold, including members of the American Alliance of Klans, a new coalition formed in Dixie County, Florida, on March 11, 2017.  “Great brotherhood, solidarity, and honorable Folk. United we stand!,” Schoep wrote underneath a photo on his twitter page of him standing in front of a nearly 40-foot tall burning cross.. An ECK member who advertised the event on Stormfront thanked NSM for their participation. “The East Coast Knights would like to thank all Klans that came and would like to also thank the N.S.M. as well.”

Besides attending ECK’s cross burning, Schoep’s coalition has failed to camouflage its true nature on the web. On Schoep’s website, he still lists three Klan groups as NF members. Yet, interestingly, the three groups are absent from the Nationalist Front’s website, which is registered to Heimbach’s group Traditionalist Worker Party. And the two websites were recently updated to include the neo-confederate group League of the South (LOS), who recently joined.

In group photos snapped during NSM’s annual rally on April 29 in Pikeville, Kentucky, members of the NSM, TWP and LOS stood shoulder to shoulder with Global Crusader Order of the Ku Klux Klan (GCK) members as well. At one point, LOS president Michael Hill stood closely by a GCK member, giving a Nazi salute during his speech. 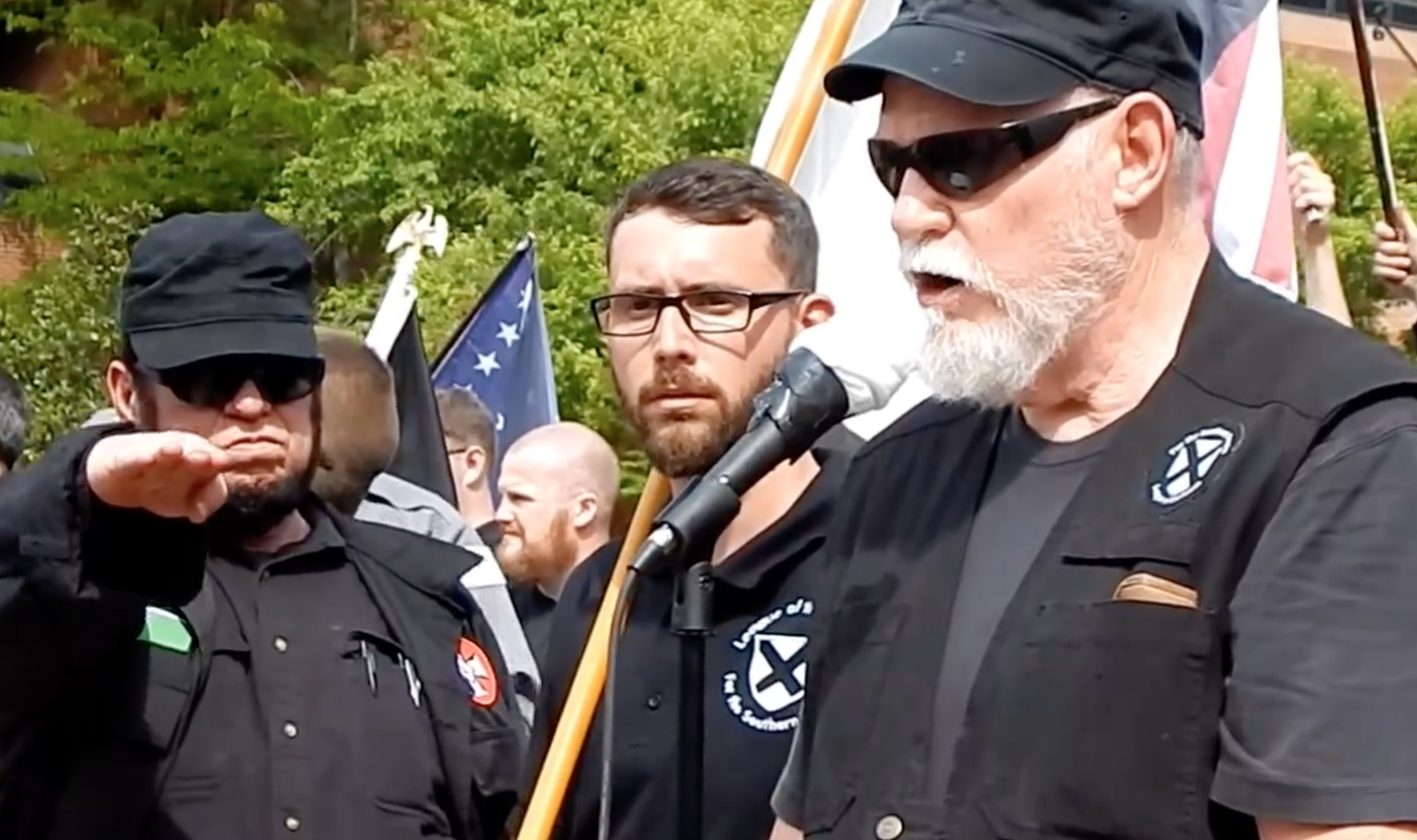 Besides NF’s comfortability with Klan members, which isn’t new, the coalition, including Heimbach and Hill’s, willingness to mingle with GCK members is alarming.

Its leader Mark Turner, 39, of Jacksonville, Florida is a long-time white supremacist with a sketchy history. Originally from Germany, in his 20s Turner was a national staffer the National Alliance (NA), a neo-Nazi group with a violent history. The Turner Diaries, a novel written by NA founder William Pierce, inspired Timothy McVeigh to bomb the Alfred P. Murrah Federal Building in 1995. In June 2016, longtime NA supporter Thomas Mair brutally murdered Jo Cox, a member of the Labour Party in the British Parliament. In recent years, Turner was the United Klans of America imperial ambassador and friend of Dennis McGiffen, leader of the neo-Nazi motorcycle club Sadistic Souls. In 1998, McGiffen was sentenced on weapons charges after investigators discovered he had stockpiled automatic weapons and a "light anti-tank rocket system. During the investigation, law enforcement also unearthed a hit list that included filmmaker Steven Spielberg, Federal Reserve Chairman Alan Greenspan, and Southern Poverty Law Center co-founder Morris Dees.

Schoep’s longstanding relationship with Klan groups never vanished, even after removing the swastika to allegedly, “launch our party into the mainstream and out of the so-called fringes.... American politics.” And it will continue this weekend. The Florida LOS state chapter, NF’s newest coalition member, has invited Turner to speak at its upcoming conference this weekend, according to a recent Facebook post.