OLYMPIA, Wash.  — The intermittent drizzle Thursday — punctuated with occasional bursts of heavy rain — probably dampened the turnout for a “Free Speech” rally by a right-wing protest group seeking to capitalize on a recent controversy over race on the Evergreen State College campus here.

A little under 100 people showed up to participate in the protest, organized by Joey Gibson and his Patriot Prayer group, which only ten days before had organized a “free speech” event in Portland that drew an alt-right audience in the wake of a brutal attack by a white nationalist (who later shouted “Free speech!” at his arraignment) on a commuter train left two men dead and shocked the city. (Gibson and his followers also participated in Saturday’s “March Against Sharia” in Seattle.) 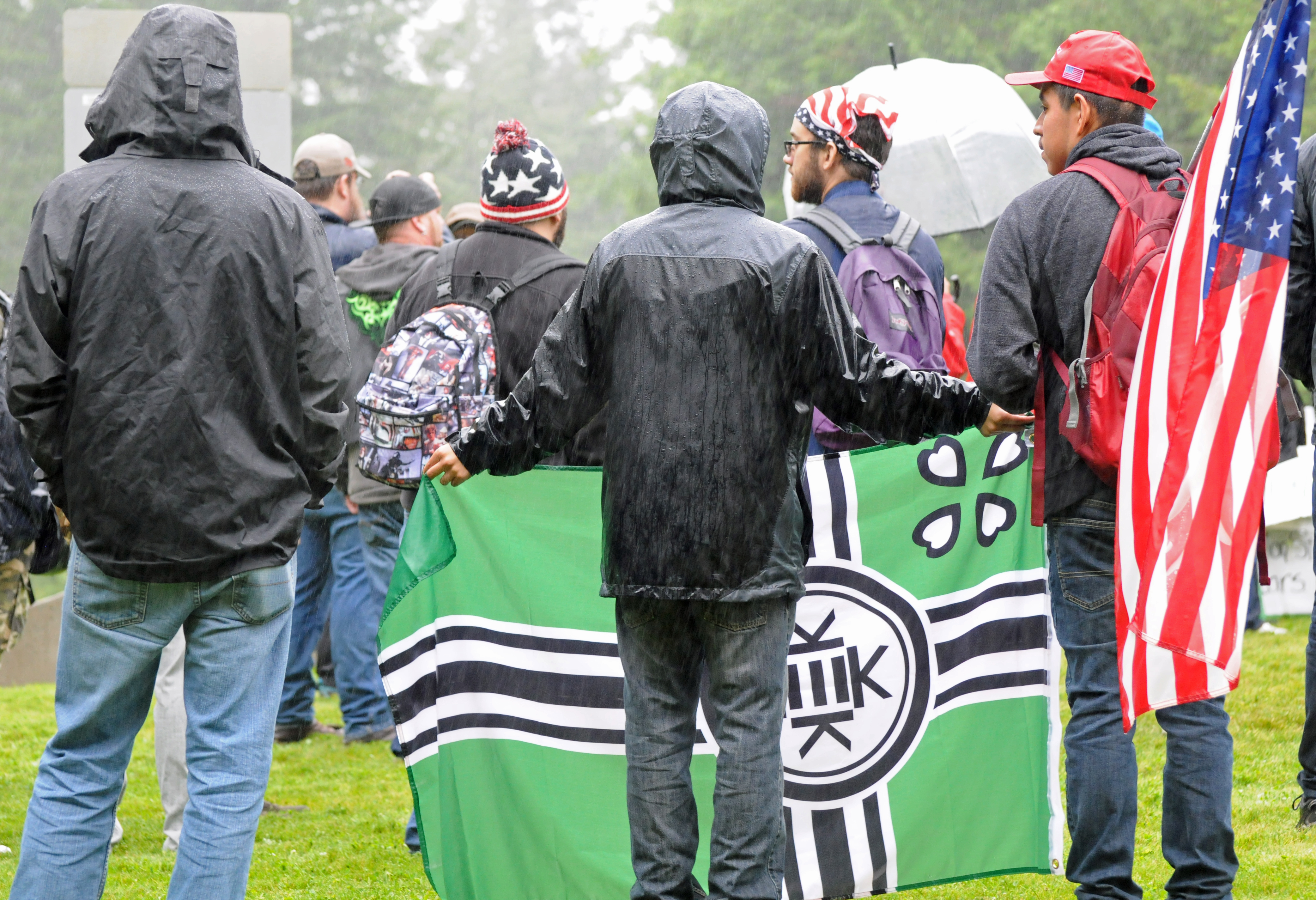 The rain turned Thursday's protest at Evergreen State into a sodden affair.

Evergreen State recently became the focus of a national controversy over how race is being handled in the academic world when a white professor at the school objected to a planned school event day on which only nonwhites would be permitted on campus. As a result, he wound up enduring harassment and threats from student activists on the campus.

After his story hit right-wing media, via an appearance by the professor on Tucker Carlson’s Fox News program, as well as such headlines as “Evergreen State College Prof Under Attack For His Skin Color,” it eventually sparked a broader debate about the environment being created on modern college campuses.

It also prompted a phoned-in threat to the county dispatch officer: “Yes, I am on my way to Evergreen now with a .44 Magnum. … I am going to execute as many people on that campus as I can get a hold of. You have that, what’s going on here, you communist scumbag?” 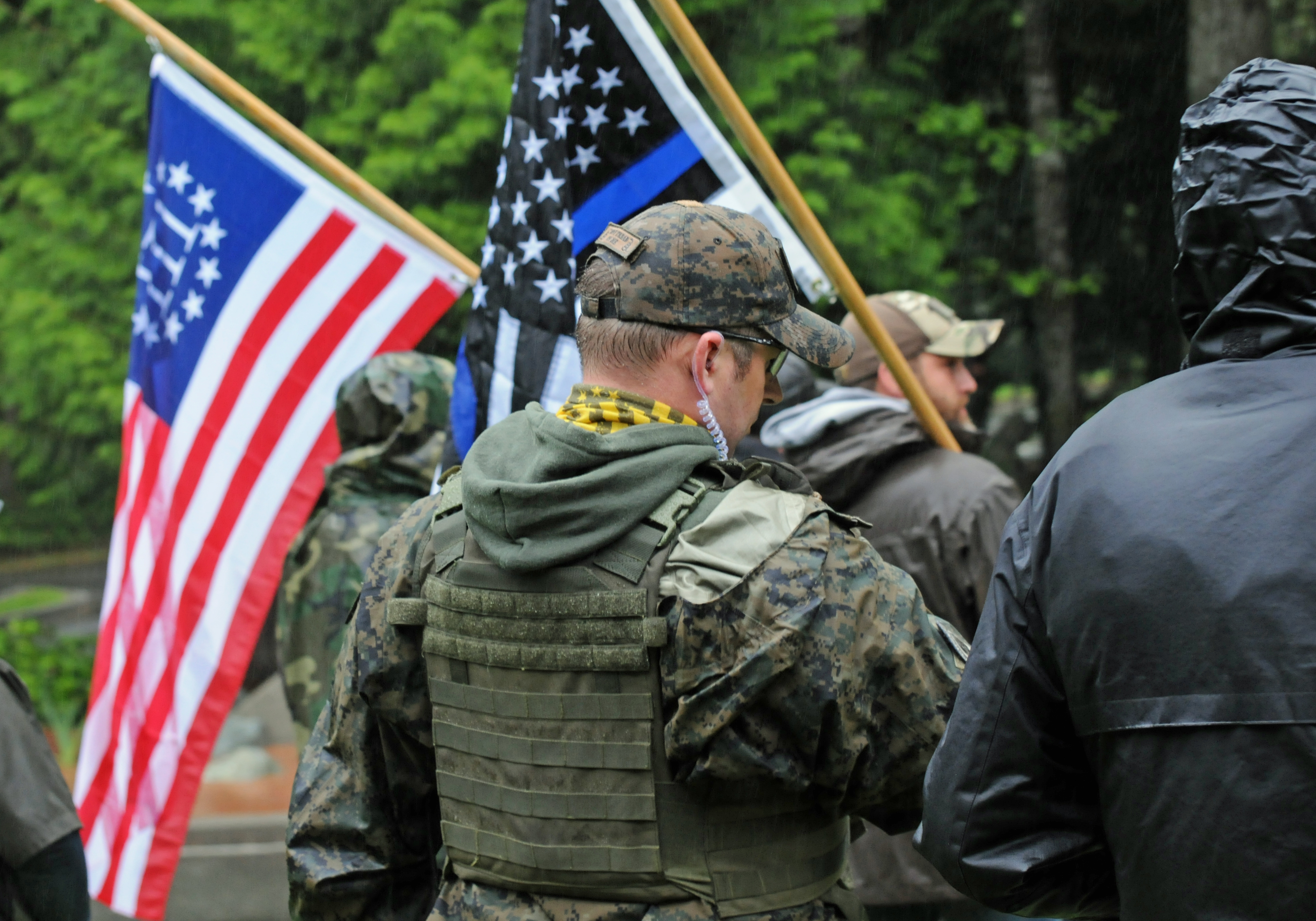 There were a number of "III Percent" militiamen among the "Patriot" contingent providing a security detail.

The college closed for three days, and then reopened under a cloud.

Thursday’s crowd, such as it was, did not seem to have its enthusiasm dampened by the weather. They first gathered on a knoll atop a large traffic circle on the edge of campus, where they listened to a handful of speakers – including several Evergreen students, who spoke out against the campus’s alleged climate of “intolerance” for whites.

Then, the gathering marched to the heart of the campus, where they found a massive crowd of several hundred counter-protesters to greet them. The crowd roared its disapproval, chanted at the “Patriots,” taunted Gibson, and produced the usual one-fingered gestures. A massive loudspeaker saturated the plaza with near-deafening electronica dance music. 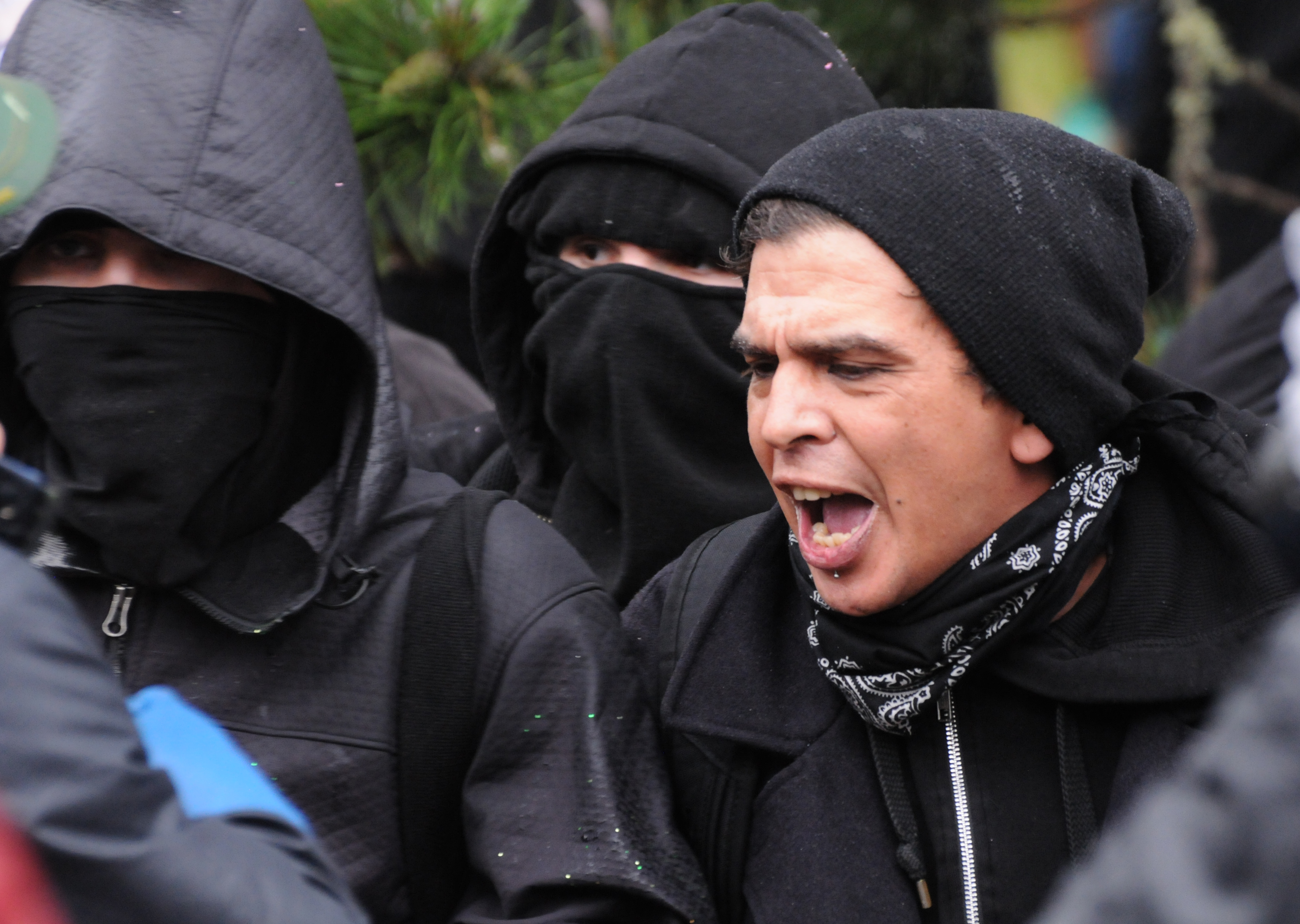 The crowd of several hundred counterprotesters included a number of black-clad antifascists.

Almost immediately, there were confrontations between black-clad antifascists among the counter-protesters and the Patriots. Large phalanxes of riot-gear-equipped State Police marched in between the factions and permanently separated them, aided by two walls of pre-erected barriers.

It was clear that counter-protesters were not welcome among the Patriot crowd; one black-clad, kerchief-masked antifascist who was on the wrong side of the police line when it separated the crowd was tackled and searched, and a small pocket knife was held up: “He’s got a knife!” The crowd, grabbing for his mask and removing it at one point, summarily threw the man over to police, where he was arrested. 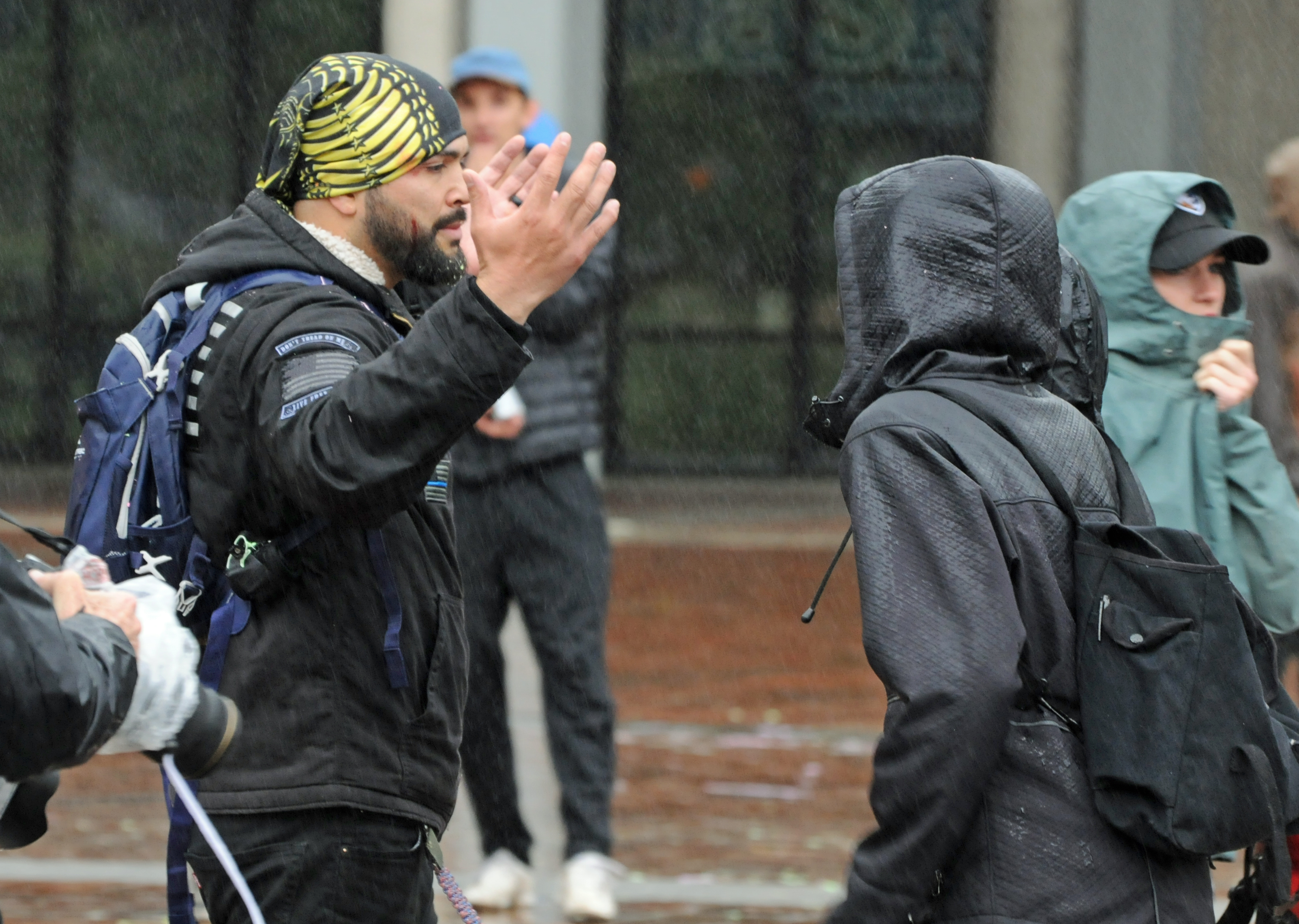 Event organizer Joey Gibson attempts to talk to antifascists on the counter-protesters' side of the barriers.

Gibson, apparently in response, walked around the barriers and began attempting, with his hands in the air, to engage masked antifascists in conversation in the midst of their crowd. The counter-protesters mostly tried to fend him off and keep him from advancing into their gathering, blocking his advance with their bodies. 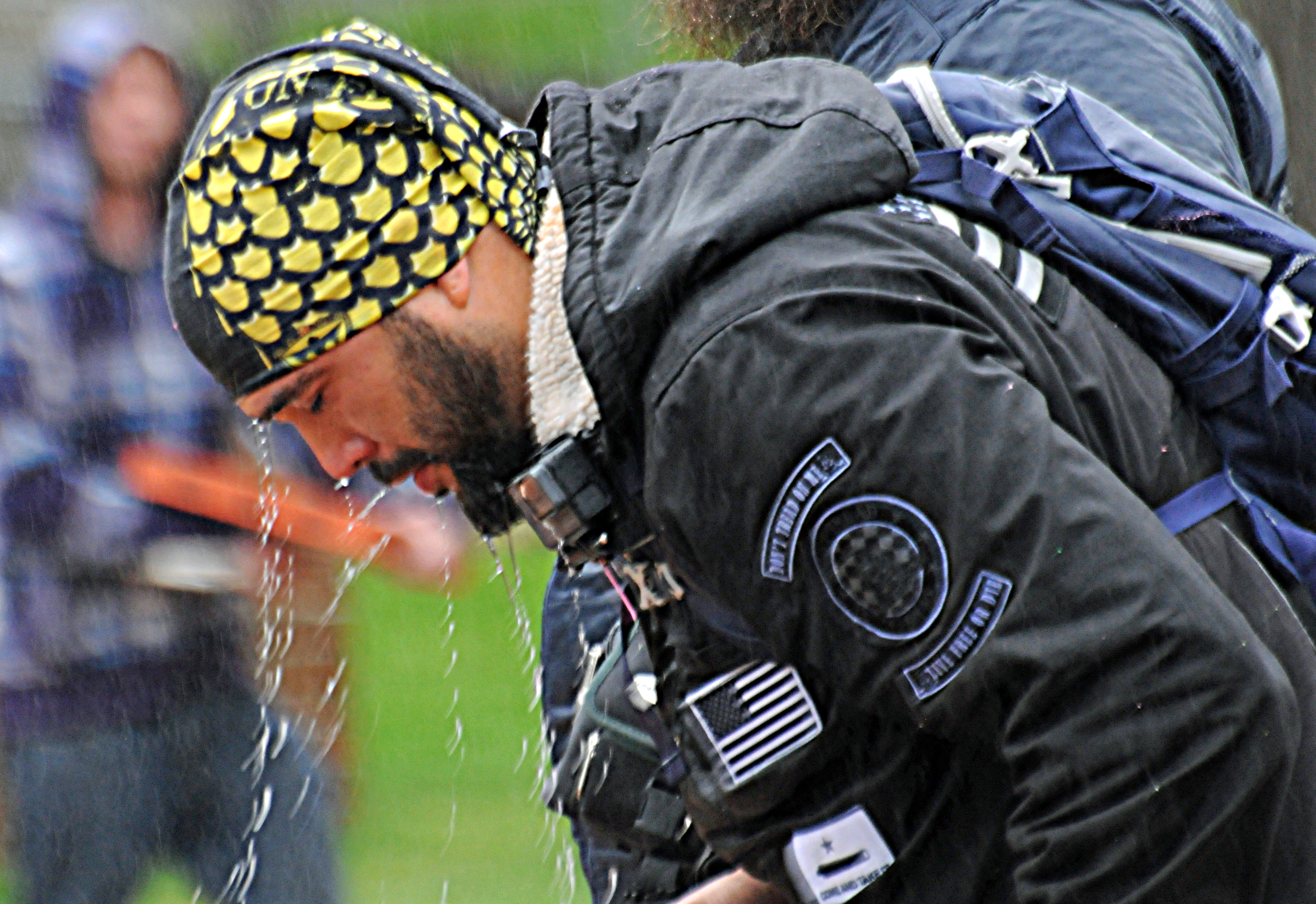 Joey Gibson rinses his eyes out after being hit with pepper spray.

Gibson, however, kept walking further into the crowd with his hands up, and eventually was hit in the eyes with a direct shot of pepper spray. He staggered out, sought help, dropped to his knees while getting his eyes washed out, and then walked back over to the other side.

Afterward, he came back to the barrier on the “Patriots” side of the divide and taunted the counter-protesters, then led the crowd in a chant of “USA! USA! USA!”

He held forth with several media crews about what he had endured. “Not one person shook my hand, not one,” he said. “I just wanted to have a conversation with them. I come over here, I walk all the way over here, I talk to a couple guys, all they do, they came and talk, one guy had a little bit of a conversation, he called me a fascist, all the stuff you hear over and over and over again. Then someone reached over and pepper-sprayed me. That’s it. That’s all they got.”

As the rally wrapped up – minus the planned speeches, spoiled by the lack of a public-address system capable of overcoming the noise from the other side – Gibson had the last word.

“We know that the hatred is over there,” he said. “It is not over here!”