Wielding M-4s and a warrant, with one of their helicopters sputtering overhead, U.S. Border Patrol agents last week raided the so-called “Byrd Camp” of the humanitarian group No More Deaths (NMD) located near Arivaca, Arizona, about 10 miles north of the U.S.-Mexico border, taking four Mexican migrants into custody.

Named for children’s book author Byrd Baylor — who owns the land where NMD offers first aid to migrants suffering from exhaustion, dehydration and other ailments as they cross the Sonoran desert — Byrd Camp had been surrounded days before by Border Patrol vehicles, according to Red Samaniego, a spokeswoman for the group, who was at the camp during the raid.

Samaniego told Hatewatch that a Border Patrol contingent showed up around the time the four men entered the camp seeking medical assistance. She declined to detail the migrants’ health complaints.

What started as siege involving five vehicles, grew to include around 15 vehicles and 30 agents, according to Samaniego. Volunteers denied the agents access to the camp. A doctor working with NMD had advised that the men needed at least one more day of rest before returning to the brutal, triple-digit heat which is the norm this time of year in Arizona.

On Thursday, agents served a warrant on the camp, arresting the four men. Photographs and video taken by NMD volunteers show agents leading migrants to BP wagons, which resemble the sort of vehicles used by municipal animal control agencies.

Samaniego told Hatewatch that NMD believes the Border Patrol had a more sinister motive than just taking the migrants into custody. She noted that BP agents told aid workers they had been following the migrants for 18 miles, and apparently had ample opportunity to apprehend the men before they reached Byrd Camp.

“It seems likely that Border Patrol was using the arrests at the camp to send a message during this very hot and deadly time of year to cross that [migrants] would not be safe to enter the camp and receive water and other medical assistance,” she said.

Such a message could have fatal consequences, if migrants are afraid of seeking help for fear of being arrested.

“BravoFoxDelta” asked, "Why aren't these persons running this "camp" being locked up and tried for harboring felons?” And “wlmiii‏,” who identified himself as a "retired LEO,” replied, "Good job @CBPArizona now tell them to pack their shit. They gotta go back." 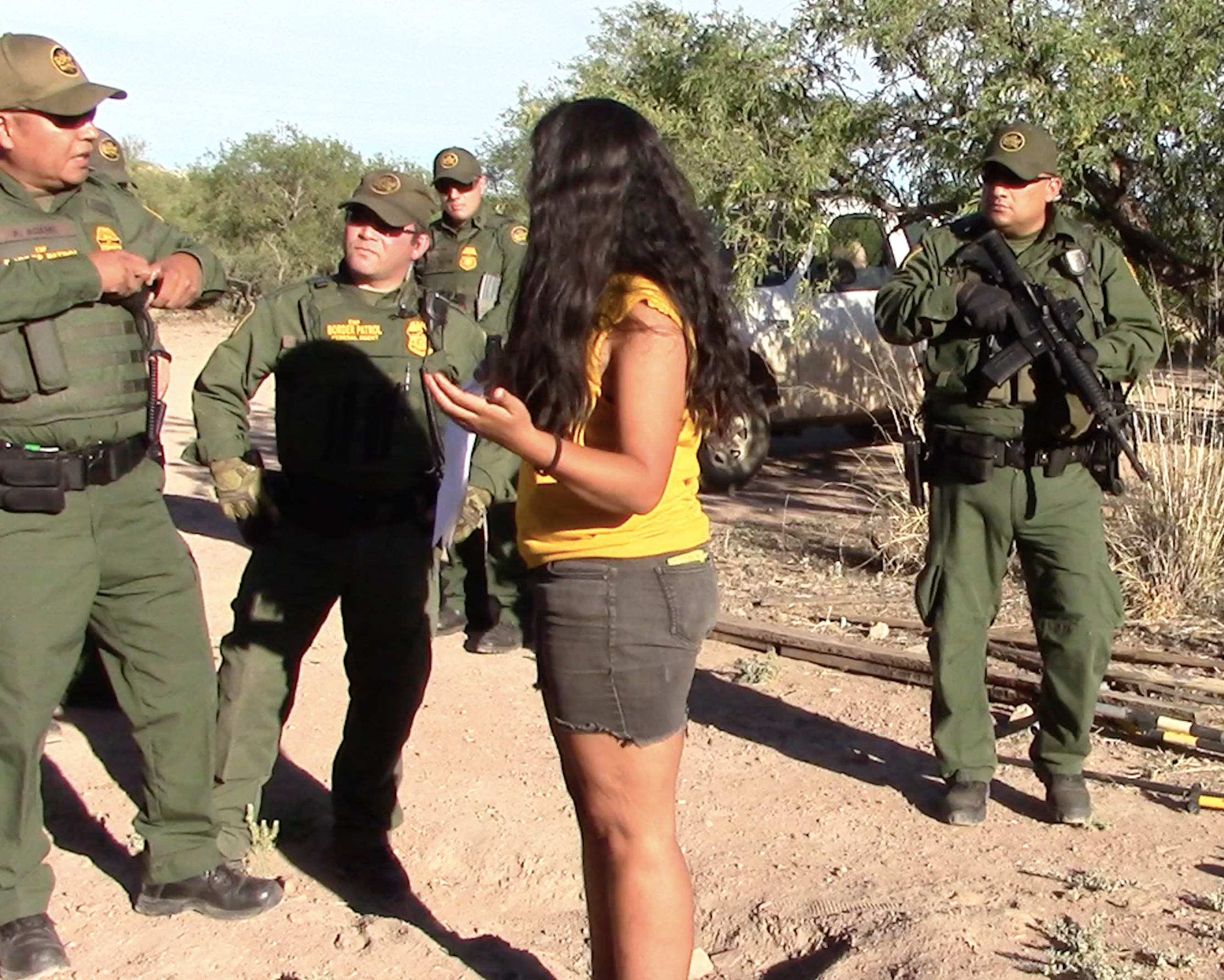 According to Coalicion de Derechos Humanos, a Tucson-based nonprofit group that keeps track of the dead in the Arizona desert, the corpses of 144 men, women and children were recovered during the 2015-2016 fiscal year, a grisly reminder that people are still willing to risk their lives to cross the border, despite illegal immigration into the U.S. being at historic lows.

The Border Patrol responded to criticism of the raid by issuing a statement saying that one of the four men apprehended was a felon, convicted of illegal possession of 600 pounds of marijuana with intent to distribute and previously had been deported.

The BP also claimed in its statement that the arrestees initially were found to be “in good health,” and that professional medical staff at a local hospital later determined that the men “did not require further medical attention.”

Despite the détente that No More Deaths supposedly enjoyed with Border Patrol under the 2013 agreement, the two groups have butted heads many times over the years.

More recently, there have been signs that the Trump administration’s aggressive anti-immigration rhetoric is translating into renewed conflicts between the Border Patrol and NMD.

Samaniego explained that about month ago, Border Patrol agents encircled Byrd Camp and eight migrants present gave themselves up to the green-clad gendarmes.

The BP referenced the incident in its recent press release, saying that the migrants’ surrender at that time was the result of “negotiations,” but Samaniego said it was the migrants’ decision to give themselves up.

Byrd Camp is not a shelter, she said.

“Our main goal is to end death and suffering in this region,” she explained. “Once patients feel healthy enough to leave, they make the decision to continue onward, or to turn back.”

Asked about the felon BP mentioned in its release, Samaniego said the group did not have a comment specific to the man’s case, but that its policy was to provide humanitarian aid to anyone who says they need it.

“We don’t believe that somebody’s prior actions, where they’re born, what country they are a citizen of, should be factor in them receiving lifesaving medical care at our facility.”