A man driving a van plowed into a crowd of Muslims who had just finished evening prayers at the Finsbury Park Mosque in north London.

The attack occurred during the Muslim holy month of Ramadan, as worshippers were breaking Ramadan fast. One person is dead and eight others were taken to hospitals with varying injuries. The suspect, 47-year-old Darren Osborne of Cardiff in Wales, allegedly shouted, “I want to kill all Muslims,” before being detained by members of the public and subsequently arrested by police. Authorities are calling this an act of terror.

The attack has all the hallmarks on an anti-Muslim hate crime. As in the U.S., hate crimes against Muslims and those perceived to be are on the rise in the U.K. Fiyaz Mughal, head of Tell MAMA, a group that tracks anti-Muslim crimes, was on Radio 4 on Monday morning describing the rise in anti-Muslim incidents following the recent terrorist attacks, stating that his group was “expecting something to happen.” Mughal was just at the Finsbury Park Mosque on Friday, reminding congregants to report anti-Muslim hate incidents.

As in the US, rightwing extremist groups in the UK have been fixated on anti-Muslim bigotry in recent years. Britain First, one of the UK’s most active groups was in the news recently when its leader, Paul Golding, was seen on video goading Muslims outside of the East London Mosque. Congregants were preparing for prayers and also raising money for the victims of a devastating and deadly fire at the Grenfell Tower housing complex in the area. In one video, Golding can be seen stating, “This used to be our area, it will be our area once again.”

The attack in Finsbury Park comes just two weeks after one of the largest far-right demonstrations in the UK in recent years, according to the anti-fascist group HOPE Not Hate (HNH). The event in Manchester was organized by Stephen Lennon, who goes by Tommy Robinson, an outspoken anti-Muslim activist and former head of the far-right English Defense League (EDL). According to HNH, between 1,000 and 2,000 people attended the event on June 6, which attracted a number of other far-right groups.

The Guardian contacted another right group, the National Front (NF) for comment on the attacker, who apparently rented the van used in the attack from the town of Pontyclun in Wales. NF’s Adam Lloyd told the Guardian that the attacker was not connected to the group and then went on to state, “Although we will never condone or accept this kind of violent attacks here in SWNF, anyone with a right mind can see this is not a terrorist attack but a revenge attack” before saying, “incidents like this are only going to increase as two different cultures clash thanks to the failed multicultural and multiracial experiment forced on us by successive corrupt governments.” This response is similar to reaction from other far-right groups based in the U.K.

The Guardian also spoke with Shaukat Warraich of Faith Associates in the UK who talked about the far-right’s targeting of mosques, stating:

On the Facebook pages of the UK’s far-right groups, many were in celebratory mood. On Britain First’s page, the comment section following the posting of a “raw footage” video after the attack was full of anti-Muslim commentary:

“What’s wrong with this man. Why didn’t he get a bigger van.”

“May I suggest a soundtrack of Queens great rock hit Another one bites the dust."

“Yaaaaaaay lets all open a bottle of [sic] champaign."

"FIRE WITH FIRE THERE WILL BE A LOT MORE. OF THIS. CAN'T SAY I BLAME THEM.”

On the Facebook page EDL English Defense League Street Movement, a picture of a van with the tasteless meme “Is This the Month of Ramadan or Ramavan” was posted, but the majority of the comments condemned the meme.  On the official page of the extremist British National Party (BNP), an article by the group following the attack called “Cue Operation Muslim Appeasement” had predictable comments:

"If you don't protect your citizens eventually they will protect themselves...did they really think no one would fight the invasion?"

"One courageous man stood up for his country as a payback, what politicians are not doing to protect the people of England." 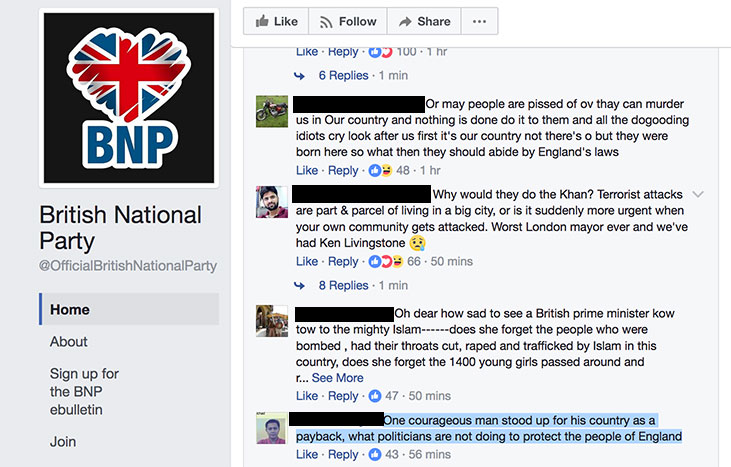 According to multiple sources, the suspect is Darren Osborne, a 47-year-old from Cardiff in Wales. Very little about Osborne’s beliefs and connections is known. It does not appear that he has a social media footprint or connections to far-right groups. Family members say Osborne is not a racist but his next-door neighbors, who are Muslim, claimed he racially abused the family’s son over the weekend, calling him “in-bred,” according to The Guardian.