When Brandon Russell was arrested by Monroe County, Florida sheriff’s deputies in the parking lot of a Burger King in Key Largo last month, authorities appear to have uncovered evidence that they potentially halted a violent altercation with domestic extremists, perhaps even a tragedy stemming from an impending terror attack.

According to court filings cited in a report by CBS News, the contents of the vehicle that Russell was driving included two rifles, hundreds of rounds of ammunition and binoculars. But one item — a skull mask — holds a deeper significance.

Russell, 21, first gained public attention when he was found at the scene of a double murder on May 19. Earlier that day, Devon Arthurs, 18, had been arrested for the murders of two of his roommates in their apartment in Tampa Falls, Florida. Russell, the fourth roommate, was discovered outside the apartment, distraught and weeping. Authorities said their apartment was full of white supremacist propaganda and bomb-making materials.

Though Arthurs had recently abandoned his neo-Nazi beliefs and become a devotee of radical Islam, all at one point were reportedly neo-Nazis, though the family of at least one of Arthurs’ alleged victims disputes this. Russell has since admitted to being a member of the AtomWaffen Division, a relatively small hate group that organizes and operates primarily on the virulently neo-Nazi, neo-fascist online forum IronMarch.org, which is where the recovered mask comes into play. 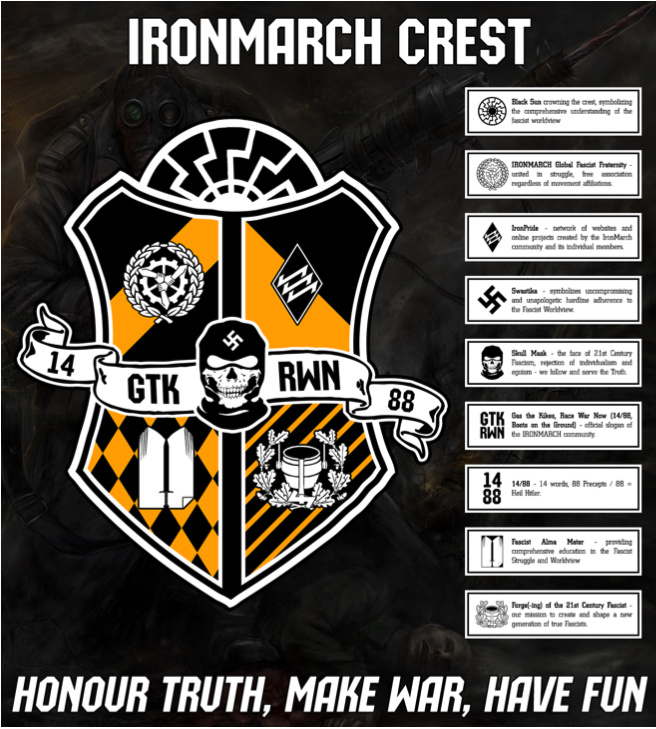 The skull mask is a symbol of significance on Iron March, even earning a place in the forum’s official crest, a breakdown of which is detailed on the site. In it, the skull mask is described as “the face of 21st Century Fascism [sic], rejection of individualism and egoism — we follow and serve the Truth [sic].”

It was AtomWaffen member Stephen Billingsley who harassed a vigil held in Crockett Park in San Antonio, Texas last summer for the victims of the Pulse Night club shooting carried out by Omar Mateen on June 12, 2016, in Orlando, Florida. Billingsley was photographed at the vigil wearing the skull mask while holding a sign reading, “God Hates F---,” a phrase and demonstration-style made infamous by the Westboro Baptist Church.

Billingsley, who is in his early 20s, identified himself as member of the group to Brian Chasnoff of the San Antonio Express over Facebook, writing:

“I am a member of the Atomwaffen Division….This was my first action taken on behalf of the Division and our first public action — you can expect to hear more of us in the future…. We must preserve the purity of our race, oppose the intrusion of foreign religions and do away with homosexuality for good. Heil Hitler!” 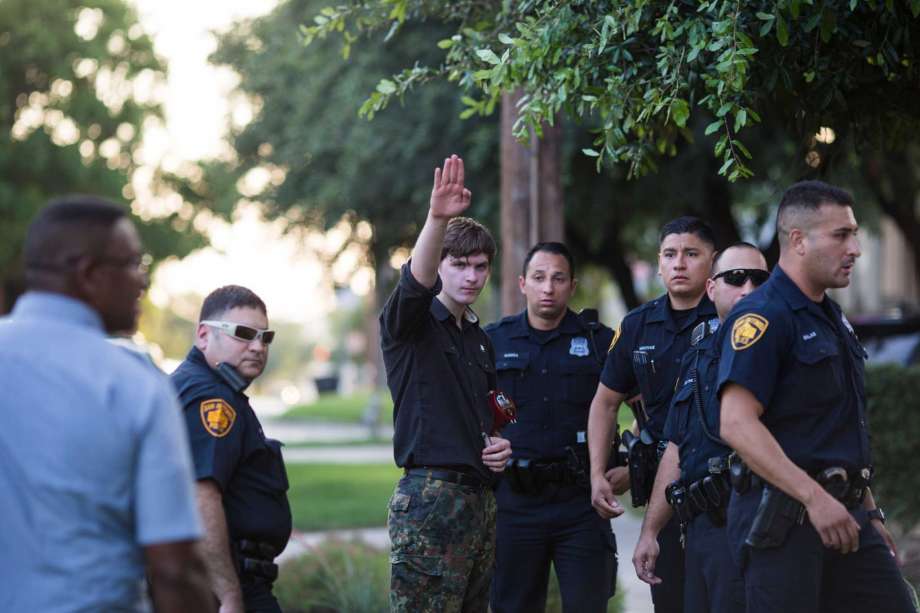 AtomWaffen at the Pulse vigil in Texas.

Not long after, designs featuring silhouettes that resemble Billingsley began appearing on Iron March, lionizing him in an attempt to inspire others to take real world action.

An AtomWaffen member was also pictured wearing the skull mask at a demonstration before the office of the Anti-Defamation League in Houston, Texas on October 22, 2016. The group’s logo adorned the masked individual’s hat. That demonstration was organized by neo-Nazi, white nationalist-connected hate group, the Texas chapter of White Lives Matter and its leader, Ken Reed. 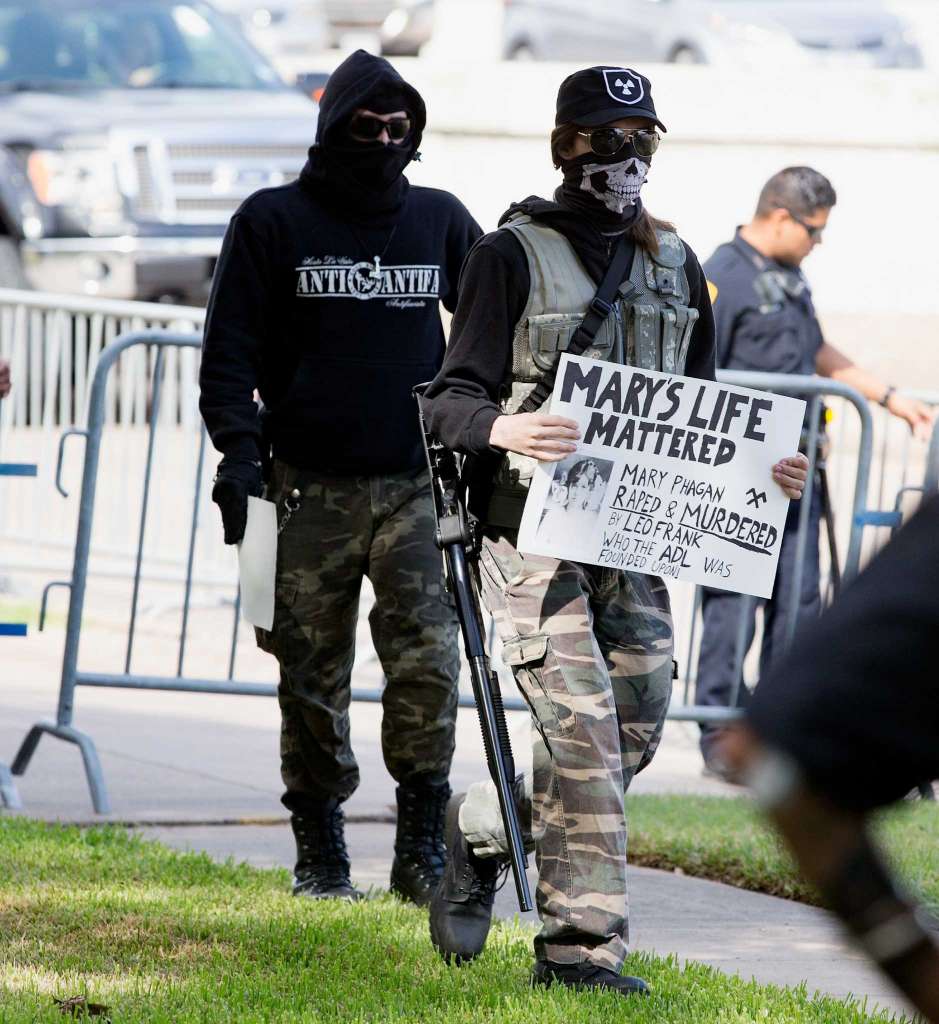 AtomWaffen demonstrating outside the Anti-Defamation League in Houston.

Before those incidents and since, AtomWaffen and Iron March devotees have largely contented themselves with intermittently flyering college campus, usually under cover of night.

The group’s profile and reputation have grown since the arrests of Arthur and Russell.

Federal prosecutors argued that he should not be released, outlining the allegations against him. They underscored that investigators had discovered bomb-making materials and Russell’s framed picture of Timothy McVeigh as proof of the threat he poses to public safety. McVeigh’s bombing of the Murrah Building in Oklahoma City in 1995 killed 168, including 19 children, and injured just over 680 individuals. Prosecutors, as CBS news reported, further concluded that Russell “planned to use the explosives to harm civilians, nuclear facilities and synagogues.”

Also in the apartment, investigators found copies of Adolf Hitler’s Mein Kampf and The Turner Diaries, the racist novel penned by William Pierce of the neo-Nazi National Alliance. The novel served as the blueprint for McVeigh’s bombing and has inspired neo-Nazi terror cells like The Order, which committed armed robberies and murder in the 1980s in service to organized white supremacy.

After Arthur’s arrest on June 9, Russell left town as the warrant for his own arrest was being processed. Monroe County Sheriff’s also identified that William James Tschantre, 20, also a reported neo-Nazi, accompanied him. Tschantre reportedly cashed in $3,000 in savings before they left. The two then apparently purchased rifles and ammunition before Russell’s arrest on June 11.

When questioned about the contents discovered in the vehicle, Russell argued that they “could be used for hunting.” They more resemble the weaponry and tools necessary for carrying out a sniper-style attack.

By June 14, after weighing the evidence further, McCoun agreed with prosecutors and duly rescinded Russell bond.

The skull mask and photo of McVeigh, like copies of Mein Kampf and The Turner Diaries, evidence not just far-right extremism and the threats of terrorism its adherents can demonstrate, but also the documents from which they steep and nurture their own radicalization.

It seems that, after Devon Arthur’s alleged murdering of his and Russell’s two roommates, the diligent work of law enforcement appears to have halted one or, perhaps, even a series of domestic terror attacks by individuals connected to IronMarch.org.