A series of conflicts at a Houston protest last Saturday between members of the Alt-Right and a slew of Texas based militia and “patriot” groups has reanimated a tired trope at the heart of the Alt-Right: baby boomers are responsible for every problem afflicting whites in modern America.

Baby boomers and the Jewish elites, rather.

Disdain for baby boomers is a foundational tenet of the Alt-Right that associates the post-WWII generation with warmongering, selfish capitulation to big business at the cost of principled conservatism, and, most offensively, voluntary subjugation of themselves and their children to so-called cultural Marxism.

Ironically, some of the Alt-Right’s most vociferous critics of baby boomers, such as Richard Spencer, depended on their parents while their movement careers were in their infancy. Spencer, head of the white nationalist National Policy Institute (NPI) and the de facto leader of the Alt-Right, lived out of his parents’ second home in the resort town of Whitefish, Montana, while building his reputation within the movement.

Richard Spencer’s grandfather was a wealthy Louisiana doctor-turned-cotton planter and there has been some speculation that the sale of family farming land has allowed him to pursue his “life of thought-crime.” His father’s salary as an ophthalmologist afforded Spencer the opportunity to attend St. Mark’s School of Texas, arguably Dallas’s most prestigious prep school. Spencer then went on to attend some of the most elite and expensive universities in the nation. 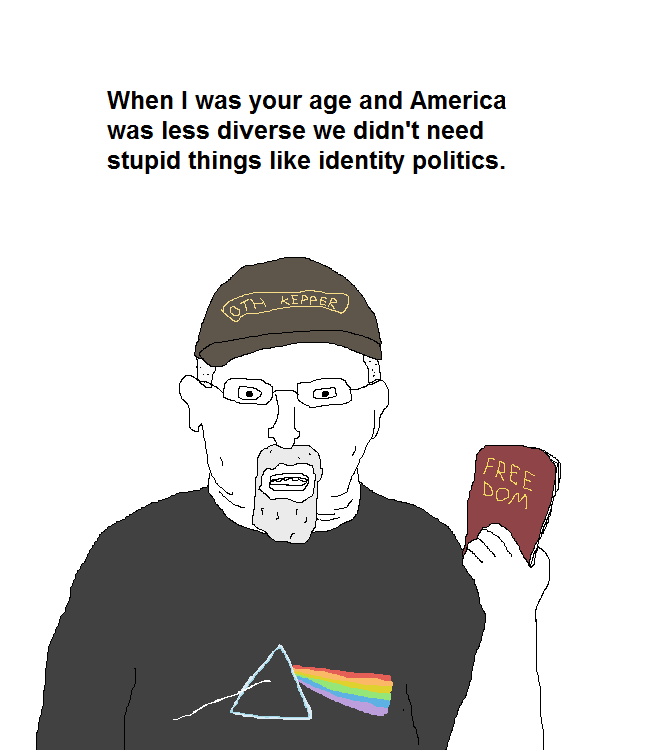 One of many memes mocking Oath Keeper leader Stewart Rhodes.

There’s a yawning gap between the familial resources afforded to the Alt-Right’s leaders and many of their adherents, but that hypocrisy hasn’t impeded the base from running with the vitriolic anti-boomer sentiment propagated by its leading lights.

“The biggest cultural changes of the 20th century occurred during the 1960s when the baby boomer generation was coming of age,” wrote Ben Richards on the Daily Stormer. “Through the use of televised propaganda, many of that generation bought into the Jewish promoted ideals of Cultural Marxism. This was sold to them as a liberating form of rebellion against the conservative ideals of their parents. Jews were able to use the rebellious nature of their youth to push a society destroying agenda that is still playing out today.”

While the Alt-Right — by and large a youthful movement — celebrated Trump's election, the supporters who actually propelled Trump’s candidacy to victory consisted of a demographic that the Alt-Right loathes: baby boomers.

Dissatisfaction over President Trump’s abandonment of campaign promises — which has increased daily among even his most enthusiastic supporters — has forced the Alt-Right to find other outlets for their rage. Recently, this has taken the form of physical theatrics like the confrontations in Houston with the armed cosplayers in fatigues that make up This is Texas.

Militias like This is Texas — which organized the Hermann Park protests in Houston — have become vehicles for the Alt-Right to pivot back to their defining anger toward baby boomers. Much of this rage is attributed to declining economic prospects for millennials and generation Z due to the perceived selfishness of boomers and the resulting fragmentation of communities.

“The only places a young man can find entry level work any more is in large urban cities for some shitty giant corporation that can afford to take a chance on a young guy, but has no problem giving him the boot if it ain't working out,” wrote “Doctor Mayhem” in a thread titled “Why We Should Hate Boomers and Owe Them Nothing” on The Right Stuff’s 504um. “The real kicker is dad, mom, grandpa, and grandma then have the gall to bitch that you moved so far away, without even considering that it was their political apathy that brought in Juan, Carlos, and Chang to take all the decent entry level jobs for pennies on the dollar, forcing you to move.”

Richard Spencer frequently and self-satisfyingly acknowledges the indebtedness of the Alt-Right to the left for this line of boomer critique in an April 21 video titled “Bill O’Reilly and the End of Boomer Conservatism.”

In the video Spencer lifts up the disgraced Fox News television anchor Bill O’Reilly as an “icon of white America and of conservative America,” before tearing him down as the archetypical “Boomer Conservative.”

“To simply deny this and think race can be dissolved into ‘muh patriotism’ or to loudly harangue anyone who doesn’t think that race structures society is a kind of clueless denialism ... It is something certainly characteristic of boomer conservatism, where they will very cluelessly, very absurdly claim that race doesn’t exist or they don’t see it and we’re all ‘muricans and that’s something that millennials certainly scoff ... it’s something that the entire left scoffs at and they scoff at it because it does lack self-awareness, it lacks truth, it’s a way of glossing over some deeper problem, or deeper essence of our society.”

Spencer’s own lack of self-awareness is what’s truly on display here. While trying to make the novel point that the Alt-Right is taking cues from the left, who in Spencer’s alternate universe are also so-called race realists, he repeats one of the most tired tropes in politics: Everything is my parent’s generation’s fault and they don’t understand me at all! 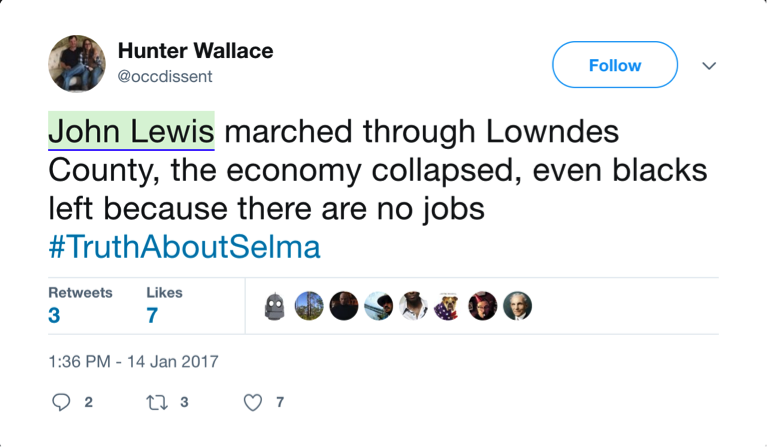 Through the tweet storm, Griffin attempts to level the economic plight of Selma, as a proxy for the blue-collar South, at the feet of John Lewis and the Civil Rights Movement, supported by boomers.

Meanwhile, Spencer’s only job to speak of is running a faux-think tank out of an Alexandria, Virginia, townhome.

Brad Griffin AKA Hunter Wallace of Occidental Dissent and the Neo-Confederate League of the South, made his own attempt at Spencer’s banal point three months earlier in a slew of tweets titled “The Truth About Selma,” depicting a road-trip from the Alabama State Capitol in Montgomery through the rural Black Belt.

This acknowledgement of poor and working-class woes, blindered by a strict focus on race, is a favorite recruitment strategy of the hallucinatory chess masters of the marginal right. Its success has been notably invisible. 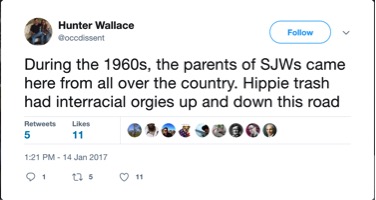 In a post on The Right Stuff’s Neo-Confederate offshoot Identity Dixie, a pseudonymous author, “Braxton Bragg,” shared a post titled “Thoughts on the Boomer Question,” which unpacks several of the grievances that the “Alt-Right” holds against the boomers.

“The first key issue on which Boomers are ideologically different, from younger generations and the Alt-Right, is the question of race and egalitarianism. The majority of Boomers espouse the idea that all races of men are physiologically and psychologically the same ... The second key issue on which the Boomers differ ideologically, is on the question of Jewish influence and the United State’s relationship with Israel. ... Lastly, the Boomer generation lacks an understanding of the contrast between the world they grew up in and the world Generations X and Y have had to contend with. The Boomer generation had opportunities set before them by their parents, yet some of them chose to be indolent and instead railed against their parents as part of the counterculture movement ... The taxation of working class whites to subsidize the existence of those living off the welfare state has made it disadvantageous to start a family. Yet, many Boomers only see their kids being lazy or incapable.”

The latter point betrays the political underpinnings of the Alt-Right as a reactionary movement animated by the grievances of a young, web-savvy whites who resent the opportunities available to their parents and grandparents and seek redress for socio- economic woes solely through racial separation.

It also neatly encapsulates the entire feud last Saturday between This is Texas and the Alt-Right — and all of the shitposting that followed. An incapable militia group showed up en masse to protest an antifa event that never got closer to reality than Facebook, while a mob of fashy trolls exploited that ineptitude and spent a week online making lazy memes essentially complaining that mom and dad ruined everything.