Michael Hill, president of the Neo-Confederate League of the South (LOS), has gone to great lengths to mark himself as a radical and distance himself from his prior aversion to being called racist. Not every ranking LOS member has been as willing to publicly offer a full-throated explanation of their abhorrent beliefs.

Take for instance John Mark “Tiny” Malone, the LOS’s Director of Security and Intelligence and June 21st guest on David Duke’s radio program. Despite issuing comical, authoritative threat level announcements to the LOS Facebook group, Malone goes out of his way to mask his identity.

In fact, Malone’s duplicity goes so far as to suggest his LOS activity amounts to a secret life.

On one hand there is the automobile and photography enthusiast, a church leader who has shared warm videos of a black pastor singing hymns. On the other is a virulently racist, anti-Semitic zealot who rages about the upcoming race war against the puppets of organized Jewry. 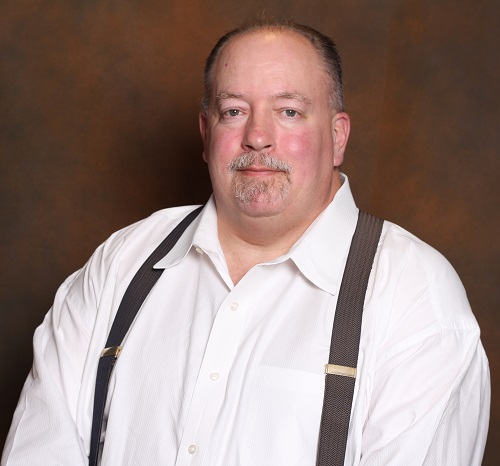 Asked during his guest appearance with Duke whether “Christians should support the state of Israel,” Malone responded, “All it takes is a simple reading of the Bible to know... as a Christian is Jews, they hate you, they are killing your people, they are doing it across the world, they have done it historically, they are doing it right now.”

Malone then asserts Jews are guilty of “every form of perversion,” and that Christian Zionists have been “Judaized.”

Malone can thank Michael Hill’s blind ambition and hunger for attention in an age of increasing right-wing militancy — and his own desire for the spotlight — for his two lives crashing into one another. 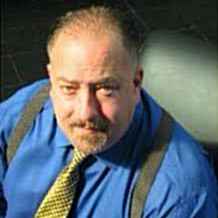 Hill, who is more outspoken in his anti-Semitism than ever before, received lavish praise during a May 8 episode of Stormfront Radio for the LOS’s performance at the “Battle of New Orleans.” After Duke boasted of a recent “outpouring of nationalism,” he told his listeners, “His head of security, I met with him last night in Baton Rouge...He’s just a great, great guy. We had a great meeting, and we’re also coming up with some other options — he is — he’s been in finance and he’s got some options that we’re going to try to do to help with some of the credit card shutdown issues.”

Securing convenient forms of online payment has been a perennial problem for the far right. Stormfront’s founder Don Black has resorted to repeated pleas for funding after having his PayPal account canceled and finding himself unable to secure a merchant account to process online transactions after a recent ban from his previous processing company.

The LOS and one of its affiliates, Occidental Dissent — a favorite white nationalist blog of LOS members — recently lost PayPal accounts for terms of use violations. While Hill has attempted to skirt this loss by using his personal account to accept payments and donations, others have been put in a precarious position with no clear avenue to raise already scarce funds.

Malone, however, had the solution.

Less than a week after Duke’s meeting with the LOS head of security, both Stormfront and Occidental Dissent were using new, nearly identical donation forms powered by a company named Donate.ly that allows organizations — primarily social good and non- profit groups — to process donations made by credit card.

When contacted by Hatewatch about Stormfront and Occidental Dissent using their platform, a company spokesperson explained, “Donately is a service that allows organizations to start taking online donations simply and without a contract. As such, we don’t approve or deny the organizations that use our service before they create an account.”

After describing a recent decision to ban an account opened by Kyle “Based Stickman” Chapman, the spokesman continued: “We don’t allow violent hate groups to use our services. The ‘Based Stickman’ incident just happened recently and since then we have been consulting with our legal council to amend our Terms of Service to be more clear on what is not allowed on the system.”

A simple search on Twitter for @TinyMalone explains how the LOS’s head of security would know how to solve one of the radical right’s most nagging problems: fundraising. @TinyMalone’s profile identifies him as an “#SEOExpert & COO @SphereControl.”

Various other profiles match “Tiny Malone” with Sphere Control SEO and several locations including Las Vegas, Dallas, Houston and Baton Rouge. One such profile on Flickr includes a lengthy description of the user’s interests: “Here in Las Vegas, though I am a Southern Gentleman at heart having come from Texas and Louisiana. My other interests include cars, competitive target shooting, bass fishing and reading. ... I am an apologetic believer, though not a Bible thumper.”

His LinkedIn profile also shares the same photo and lists him as a graduate of Abilene Christian University and COO at Sphere Control SEO in Baton Rouge. 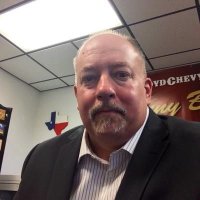 A YouTube account with the username Tiny Malone sharing the same photo from his LinkedIn, Twitter and various other accounts has shared five videos. In each of the videos, the same man from the aforementioned photographs sings various church hymns at Church of Christ gatherings.

Multiple requests for comment to Southern Hills Church of Christ were not returned by press time.

As Hill has embroiled the League in more and more openly militant and aggressive public displays as part of a recent PR drive, some of the most prominent LOS members, like Malone, have nevertheless attempted to keep a low profile and maintain anonymity out of recognition that a large part of the populace might choose to not conduct business or maintain relationships with them were they found out.

Malone’s recent appearance on Duke’s radio program is a surprisingly brash move for the otherwise cautious Malone. When Duke finally relinquished the microphone after a lengthy self-promotion of his upcoming speech at the LOS’s annual national conference in Wetumpka, Alabama, Malone took the opportunity to hit on familiar themes like white genocide, Jewish control in politics and the assertion that Israel is behind ISIS.

While these anti-Semitic ramblings were once taboo among LOS members, they have recently become a favorite crutch for the aging Hill to explain away the problems besetting poor whites in the South and why the LOS — which rallies behind the slogan “For the Southern People!” — hasn’t managed to alleviate any of them.

Hill, who is insulated from the working world in a comfortable role as LOS president, doesn’t face the same challenges as rank-and-file members who must find employment in the real world and carefully mask their vitriolic hate for blacks, Jews, gays and essentially any non-“white Christian southerner.”

In seeking to raise the profile of this weekend’s LOS Conference by inviting Duke, Hill has at the same time allowed Malone, an asset that has heretofore sought to keep at arm’s length, to be burned.

In a recent admonition to LOS members after Michael Peroutka, an elected Ann Arundel County, Maryland, councilman denounced Hill, the LOS president wrote, “if you cannot take the heat, be warned: The League may be a place that’s much too hot for you.”

Tiny Malone appears to have hardened himself to participate in Hill’s coming “conflict.” In September of 2015, Malone shared the following post: 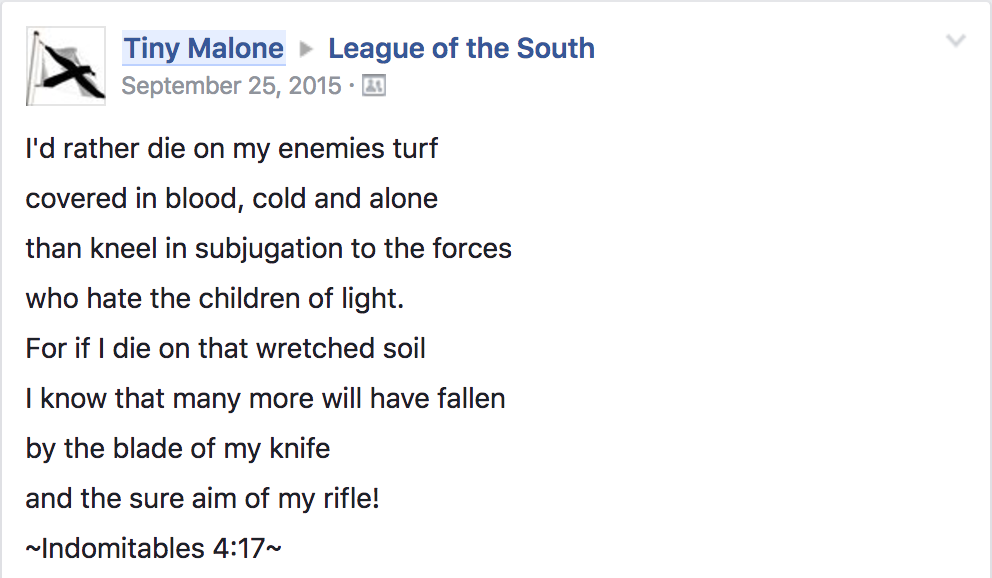