Andrew Auernheimer, the notorious hacker and Internet troll known as ‘Weev,’ rallied the neo-Nazi Daily Stormer’s troll army for its latest campaign this morning, claiming that CNN was blackmailing a “teen shitposter.”

The events leading to this online call to arms began Sunday morning, when President Trump tweeted a gif created by Reddit user HanAssholeSolo depicting a scene from Wrestlemania XXIII in which Trump body slams and pummels WWE promoter Vince McMahon. In the gif, the CNN logo is superimposed over McMahon’s face.

Fearing public embarrassment and his safety, HanAssholeSolo published a lengthy apology on the Reddit group r/theDonald, asking that CNN not publish his identity. (The apology has since been removed.)

Alt-righter Jack Posobiec claims HanAssholeSolo is a 15 year-old LGBT person; however, CNN has identified the Reddit user as an adult male. (via Twitter)

CNN obliged, on the condition that HanAssholeSolo remove his offending posts and cease his trolling, but that didn’t stop the self-proclaimed “real media” at the Daily Stormer from issuing an ultimatum to every staffer at CNN.

“Just like CNN tracked down this child and used media exposure as a bludgeon against him for posting (truthful and funny) things that they don’t like, we are going to begin tracking down their families as a bludgeon against them for publishing (seditiously fraudulent) things that we don’t like,” wrote Auernheimer. “CNN, this is your one singular chance to walk back this behavior of public blackmail. You have one week to fix this.”

Auernheimer’s list of demands includes the public firing of the KFile team, a denouncement of their alleged threats, a $50,000 college scholarship for HanAssholeSolo, and a public assurance that “he and his family will never be harmed by your organization.”

The only problem: HanAssholeSolo is an adult, according to CNN. 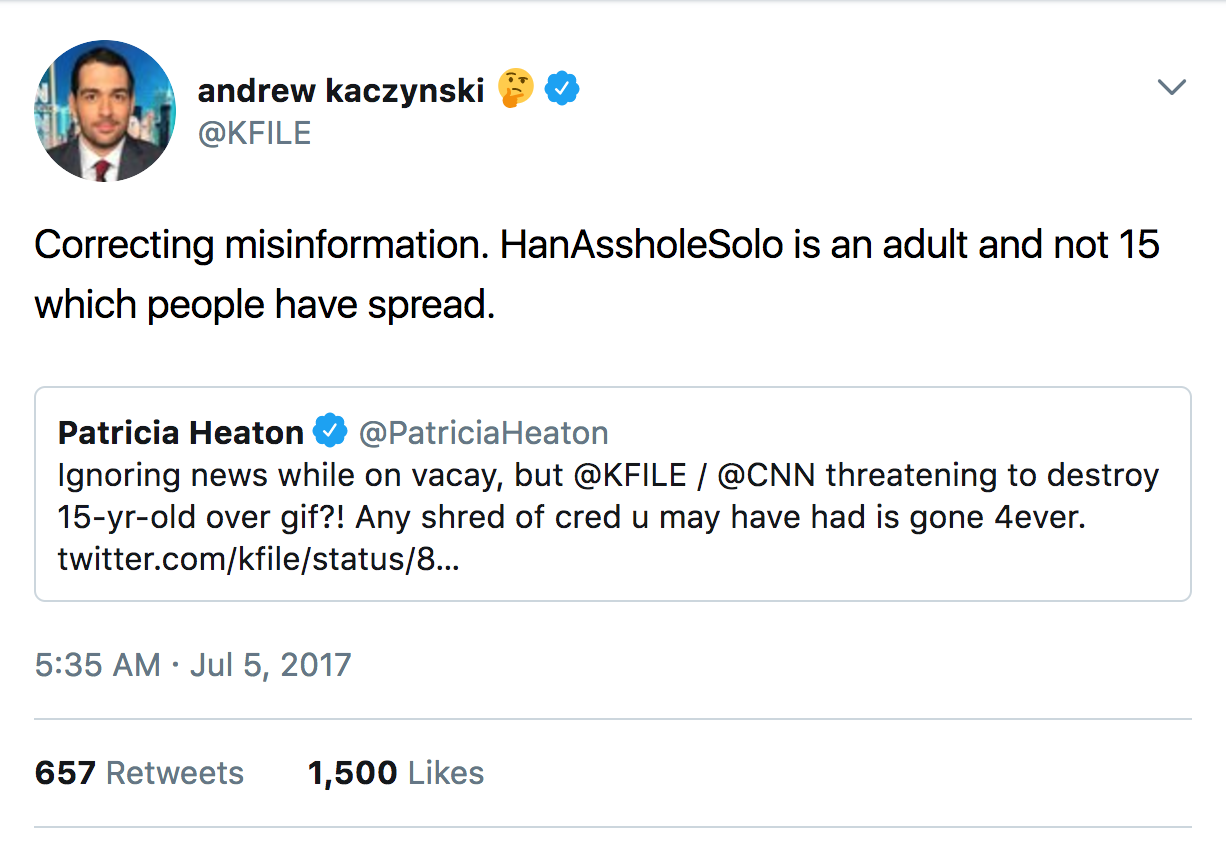 Andrew Kaczynski, senor editor of CNN's KFile, Tweets that HanAssholeSolo is an adult, not a teenager, as some have claimed. (via Twitter)

Auernheimer instructed CNN employees that do not want to be doxed to quit within the week and denounce the organization’s alleged blackmail.

“We didn’t make these rules – you did – and now we’re going to force you to play by them. Hope you enjoy what is coming, you filthy rat k--- bastards. Kill yourselves, k--- news fakers. You deserve every single bit of what you are about to get,” concluded Auernheimer.

The call to "kill the lying mass of shit that is CNN" posted to 4chan's politically incorrect forum, /pol/.

Within hours, personal information for multiple CNN staffers and their family members -- alongside images and gifs of individuals with CNN superimposed over their faces being shot in the head -- appeared in the comments of the posting.

The incident is a rare moment of unity for the far-right with members of r/theDonald, 4chan, the Daily Stormer, and the alt-lite banding together to attack CNN.

The 4chan message board /pol/, which is dedicated to politically incorrect discussion, dubbed the campaign “Operation:Autism Storm” and posted a four part plan of attack that includes banding together with other far right sites, going after CNN’s advertisers, discrediting everyone at CNN, and forming a legal strategy for HanAssholeSolo should he later be doxed.

At least nine separate hashtags trended across far-right accounts Tuesday evening – including #cnnblackmail, #cnndoxing, and #fraudnewscnn – as the controversy erupted.

“To people who troll on the Internet for fun,” wrote HanAssholeSolo. “Consider your words and actions conveyed in your message and who it might upset or anger. Put yourself in their shoes before you post it. If you have a problem with trolling it is an addiction just like any other addiction someone can have to something and don’t be embarrassed to ask for help.”