“Listen, I am being very impolitic here,“ Rios explained in a recent episode of “Sandy Rios in the Morning” for AFA’s American Family Radio, “but, as a female I find that bathrooms have just become unbearable because I think the people coming in don’t know basic hygiene, don’t know how to handle modern amenities.”

Rios’ bigoted comment, first reported by Right-Wing Watch, came during day one of the annual Hold Their Feet to the Fire radio event, organized by the anti-immigrant Federation for American Immigration Reform (FAIR) and held June 28-29 at Washington, D.C.’s Phoenix Park Hotel. 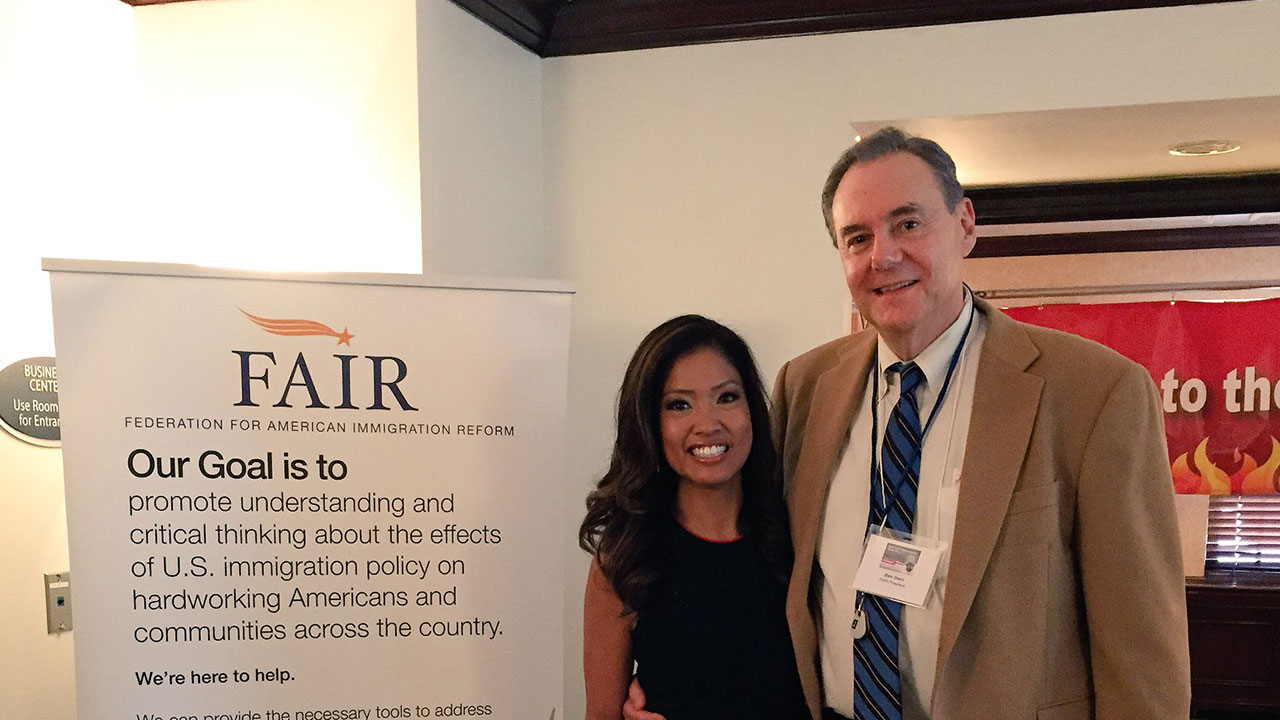 The event brought together nativist politicians, activists and law enforcement officials with around 60 like-minded radio hosts for a de rigueur demonization of immigrants, combined with a celebration of president Donald Trump’s election and a call for ever more draconian immigration reform measures.

AFA’s Rios was expounding on her bizarre fears regarding immigrants and bathrooms as she interviewed Dan Stein, FAIR’s longtime president, who seemed to believe that the nation’s impasse over immigration may require something far more vigorous than impassioned debate.

Stein’s dark turn aside, FAIR had a lot to celebrate last week: Anti-sanctuary bills passed in the House; FAIR staffers invited to the White House to meet the president and discuss immigration issues; and, of course, the 2017 HTFTTF, billed as FAIR's biggest to date.

After talking about their frustration with President Trump for not yet fulfilling some of his campaign promises on immigration, Rios reminded Stein that life was good for immigrant-bashers these days.

“Still, there’s a lot to be grateful for!” Rios enthused, accentuating the positive.

When he wasn’t celebrating an ally in the White House, Stein was warning about demographic changes and taking stabs at familiar bête noires of the right.

During an interview with Boston Herald radio, Stein accused Democrats of advocating for unfettered immigration in order to expand their constituency.

“SEIU, George Soros and others have kind of taken over the party," he claimed. "And they see immigration, by any means necessary, legal, illegal, as helping the party long term by re-engineering the demographics.”

As Stein inveighed against his foils on the left, outside the hotel on the street, a half dozen protesters carried signs, reading “Racists Enter Here” and “End White Supremacy, Sanctuary for All!”

The demonstrators caused some irritation for attendees and radio hosts, and their signs certainly alluded to FAIR’s decades-long history of racism, starting with its founder, white nationalist John Tanton. Despite this distasteful history, the group is still able to attract elected officials.

Over two-dozen U.S. House Representatives attended HTFTTF, along with at least four U.S. Senators and a number of state politicians. Iowa Congressman Steve King, one of the most outspoken anti-immigrant members of the House, used one of his speaking engagements with conservative West Virginia-based radio host Tom Roten to question the legitimacy of some Supreme Court justices.

When talking about the SCOTUS decision on the Muslim ban, King took a jab at the more liberal justices, stating that, according to “the dissents on the part of the real justices,” the president “has the authority, congress gave it to him.”

FAIR’s deep ties to law enforcement and U.S. Border Patrol were also on display. Brandon Judd and Hector Garza, president and vice president, respectively, of the National Border Patrol Council, were in attendance, along with Art Del Cueto head of the Tucson Border Patrol Union.

Hodgson, a longtime FAIR ally told Tom Roten that if elected officials offer sanctuary to undocumented immigrants, like the Mayor of Boston pledged recently, the response should be to “issue arrest warrants” on every one of those elected officials.

Among the extremists present at HTFTTF was Robert Spencer, one of the most outspoken anti-Muslim activists in America today, a man who in a 2007 interview, stated that Islam is “not a religion of peace” and has “an inherently political character that is being brought to the West by immigrants, and will cause more trouble in the future.”

In an interview with Rios, Spencer described Islam as “an ideology [that's] been a raid against the West for 1400 years.”

Spencer and Rios also talked about a leftist/Islamic plot to bring down the West, a conspiracy theory anti-Muslim groups have been peddling for a number of years.

Yet another extremist attending HTFTTF offered a disturbing example of the alliance between the Trump administration and the established nativist movement.

Trump adviser Sebastian Gorka, a man it was recently revealed was fired from the FBI for his anti-Muslim beliefs, attended the event on day one. In an interview with Portland radio host Lars Larson, Gorka railed on sanctuary cities in the United States, saying that these need to be done away with. Gorka also threatened to pull federal grants from sanctuary cities, a common threat from the Trump administration.

During the Trump campaign, numerous anti-immigrant and anti-Muslim figures advised the President, and now a number of them have left anti-immigrant groups to join the Department of Homeland Security and other posts.

These disturbing moves have been documented by the civil rights organization Center for New Community in its living-report “Nativists at the White House.”

Michelle Malkin, a much sought after attendee, summed up the theme of the event in her interview with Rios, first echoing Dan Stein’s concerns about Trump's not following through with some campaign pledges, then praising U.S. Attorney General Jeff Sessions, another key nativist ally.