Counterdemonstrators greatly outnumbered the Ku Klux Klan at a weekend rally in Charlottesville, Virginia, where the focus was on the city’s planned removal of a large statute of Civil War Gen. Robert E. Lee.

The Charlottesville rally on Saturday was the latest in a series of protests throughout the South triggered by the removal of monuments of Confederate Civil War leaders – believed by many to be legacies of slavery, oppression and racism.

The rally hyped tensions in the city of 50,000, home to the University of Virginia. 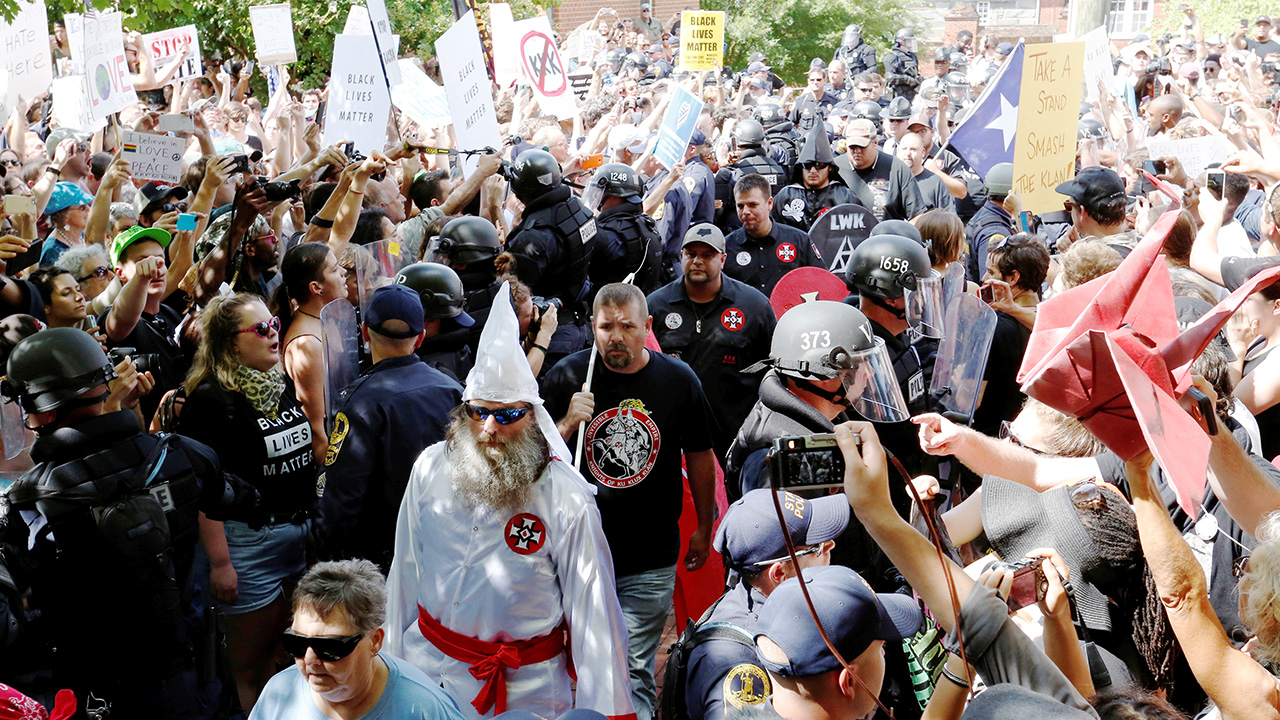 Media estimates put the number of Klan members at between 40 and 50, with more than 1,000 protesters, including 22 who were arrested when they failed to disperse after the hour-long rally.

The demonstrators were members of the Loyal White Knights of the Ku Klux Klan, based in nearby Pelham, North Carolina. The group said the demonstration was intended “to make a stand for our Southern History” and to oppose those who are "trying to erase whites and our great culture right out of the history books.”

The Klan members’ shouts of “white power” were largely drowned out by counterprotesters, according to various media reports.

Thousands of people avoided directly protesting the Klan rally by attending a “unity rally” elsewhere in the city.

“Today could have been a day of rage and indiscriminate and violent confrontation,” Charlottesville Mayor Mike Signer said in a Facebook statement after Saturday’s rally. “Instead, it was a day of prayer, education, testimony, and protest.”

“Throughout the day, we urged folks not to take the bait -- to deny the KKK the confrontation and celebrity they desire,” the mayor said.

But others decided to directly confront the Klan members who were escorted to and from the Justice Park rally by a squad of riot-equipped police.

“We did not want the KKK to enter the park so we linked arms and police did what they felt was necessary,” Nic McCarthy, one of the arrested counterprotesters, told an NBC affiliate.

“We, as citizens, also have our First Amendment rights to gather and say, ‘Actually, no we don't want you here.’ That's what we were doing,” McCarthy said.

Jalane Schmidt, a University of Virginia professor who has supported removal of the Lee statue, was among those who directly confront the Klan demonstrators.

“It is important for me to be here because the Klan was ignored in the 1920s, and they metastasized,” Schmidt told the Washington Post.

After the rally, police ordered those remaining to disperse, according to media reports. When they did not, police declared an “unlawful assembly” and fired tear gas to compel them to leave.