Greeted by a Confederate flag and thousands of right-wing activists bussed in from all across Poland, Donald Trump used his first major foreign political speech to fan the flames of nationalism and promote the idea of a clash of civilizations, echoing the nativist-filled rhetoric heard during the 2016 election campaign.

The Polish government carefully orchestrated Trump’s July 6 speech and visit in order to ensure long lasting repercussions, such as a law passed just days after Trump’s visit effectively abolishing the independence of the judiciary.

Integral to many reports of Trump’s Polish visit was Marek Chodakiewicz, a Polish-American academic with a long history of right-wing activism and controversy surrounding anti-Semitism. A few days before Trump’s visit, Polish television reported that Trump’s speech in Warsaw was penned with the help of Chodakiewicz. While neither the Polish government nor the Trump administration have confirmed the report, Chodakiewicz himself appeared in the broadcast to discuss material contained in the speech, more or less confirming his involvement.

As reported by the Southern Poverty Law Center in 2009, Chodakiewicz has a history of troubling, far-right views including repeatedly arguing that the killing of Polish Jews who survived the Holocaust by native Poles was not due to anti-Semitism, but rather to Jewish collaboration with Soviets. Chodakiewicz once sat on the oversight board of the Holocaust Memorial Museum in D.C., but lost his seat following an SPLC exposé, which revealed his extreme rhetoric that many deemed to be anti-Semitic. Chodakiewicz has repeatedly claimed that documented accounts of Poles murdering Jews in anti-Semitic pogroms or massacres during and after World War II are exaggerated or untrue.

Chodakiewicz’s far-right beliefs have not only centered on dabbling in anti-Semitism. In January of 2017, he penned a piece lamenting what he called the “ongoing genocide against Whites” in South Africa. The term “white genocide” is a common white nationalist trope, with many pointing to South Africa and falsely claiming that white people are systematically massacred by people of color. In 2014, Chodakiewicz spoke at a gathering of the far-right Ruch Narodowy or “Nationalist Movement” where he told the crowd; “We want a Catholic Poland, not a Bolshevik one, not multicultural or gay!” In an August 2015 speech in Wroclaw, Poland, Chodakiewicz quoted xenophobic politician Enoch Powell’s infamous “Rivers of Blood” speech where the Englishman warned that mass immigration would result in what the poet Virgil wrote, “Like the Roman, I seem to see the River Tiber foaming with much blood.”

In 2016 Chodakiewicz spoke at the annual Writers' Workshop put on by the white nationalist Social Contract Press. Chodakiewicz talked about the history of Intermarium, a proposed commonwealth of countries stretching from the Black and Baltic Seas. The Social Contract Press was founded by white nationalist John Tanton and has published a number of racist screeds, most famously a English translation of the French novel Camp of the Saints. The Press publishes a quarterly journal The Social Contract, edited by another white nationalist Wayne Lutton. A number of racists have been published in the journal and attended the Writers' Workshop event.

For someone with such far-right beliefs to be reportedly helping Trump prepare his speech is disturbing enough, but even stranger when you consider recent comments made by Chodakiewicz about Trump and others in the administration. In a 2016 interview, Chodakiewicz called Trump a “buffoon” and “an intellectual nothing.” This continued after Trump was elected; in May 2017, Chodakiewicz complained that Trump had “no strategy” and that his son-in-law. Jared Kushner, “was interfering with everything literally.” That said, Chodakiewicz recognized an opportunity in working with Trump that would advance the far-right in Poland.

Another connection worth noting is that Chodakiewicz works at the Institute of World Politics, also home to Trump’s national security advisor, Sebastian Gorka, who himself has ties to far-right elements in Hungary and was once fired by the FBI for his anti-Muslim “diatribes.” Gorka is on leave from the Institute due to his position in the administration.

Poland’s right-wing government, led by the Law and Justice party, has been steadily stripping away Polish democratic institutions with little opposition since the most recent general election in October of 2015. For a country like Poland, whose political elite has a longstanding inferiority complex, the visit of a current American President is an enormous occasion. The Law and Justice party saw Trump’s visit as an opportunity to stoke nationalist embers.

The night before the big event, Chodakiewicz was again on Polish state TV explaining the importance of the Trump visit. He also spoke about the fact that Trump would be the first American president since the fall of communism to not visit the memorial for those who perished in the Warsaw Ghetto in 1943. Chodakiewicz spoke about it as a positive fact, and claimed Western leaders had paid too much attention to the suffering of the Jews and not enough to Polish Christians.  The same day, Jewish leaders in Poland decried Trump’s decision. “We trust that this slight does not reflect the attitudes and feelings of the American people,” read a joint statement by Poland’s chief rabbi Michael Schudrich, Jewish Community of Warsaw president Anna Chipczynska and Leslaw Piszewski, president of the Union of Jewish Communities of Poland.

According to Polish media, the government promised Trump that he would not suffer the same hostile reception as his first visit to the continent, but that a sizable crowd would welcome him. The government and churches provided free busses to those outside the capital who wanted to attend. Poland’s main liberal newspaper, Gazeta Wyborcza, wrote “[Foreign Minister] Waszczykowski reportedly promised to the Americans he would organize an enthusiastic welcome for Donald Trump. It will be cheers, flags, enthusiasm. A model Potemkin village."

Trump was met by thousands as he delivered his speech in front of a memorial commemorating the 1944 Warsaw Uprising against the Nazis. Large swathes of the crowd booed leaders of Poland’s opposition democratic party as well as its second president, Lech Wałęsa. A Trump counter-protest drew a much smaller crowd.

At least one Confederate Battle flag could be seen in the crowd. The event attracted a number of far-right groups/elements including activists of the Nationalist Movement led by former MP Krzysztof Bosak posing under the banner “Let’s Make Poland Great Again!”

While Trump did mention the decimation of Poland’s Jews in World War II, he also hit on many points that were sure to please the nationalist right. Trump’s Samuel Huntington-esqe rhetoric promoting the idea of a clash or civilizations echoed what far-right and xenophobic political parties across Europe have been preaching for decades. A key paragraph in the Trump’s speech read: “The fundamental question of our time is whether the West has the will to survive. Do we have the confidence in our values to defend them at any cost? Do we have enough respect for our citizens to protect our borders? Do we have the desire and the courage to preserve our civilization in the face of those who would subvert and destroy it?”

The discourse of "defending civilization" has been used by the Polish far-right groups on the wave of a growing anti-migrant and anti-Muslim sentiment. Today's Poland has the lowest percentage of minorities in all of Europe, but the expressions of hate speech have become commonplace and there are growing numbers of hate crimes against foreigners as recorded everyday by the 'Never Again' Association. The Polish nationalists see Poland as a "bulwark of Europe" against Islam, gay rights and other imagined threats.

Characteristically, Trump's speech was devoid of references to “democracy” or “human rights.”

Trump was in Poland for less than 24 hours, but the longer-term repercussions of his visit, and speech, are already being felt. The ruling party wasted little time using them as a justification for their anti-democratic and xenophobic activities over the past two years.

Just hours after Trump’s departure, the extreme-right Nationalist Movement publically demanded that the US Ambassador stop all support for the annual Gay Pride march in Warsaw. The most recent march took place on June 3, 2017. The demand came in the form of a letter from Robert Winnicki, a member of the Polish parliament and head of the Nationalist Movement. On state TV, Polish deputy Foreign Minister Szymanski discussed the “clash of civilizations” on one channel while commentators Wojciech Cejrowski and Michal Rachon talked about a “victory against the whole of Islam” on another.

Witold Gadowski, a frequent commentator on state TV and other rightwing media, was interviewed in the aftermath of Trump’s speech where he stated it was better than Barak Hussein Obama’s “who spoke to the Polish people as if he was in a Negro state.”

Chodakiewicz, Trump’s alleged speech consultant, was interviewed afterward where he interpreted the speech for the Polish public, claiming the Polish democratic transformation in 1989 was fake, and that the elections that year were “falsified by pink communist collaborators.” 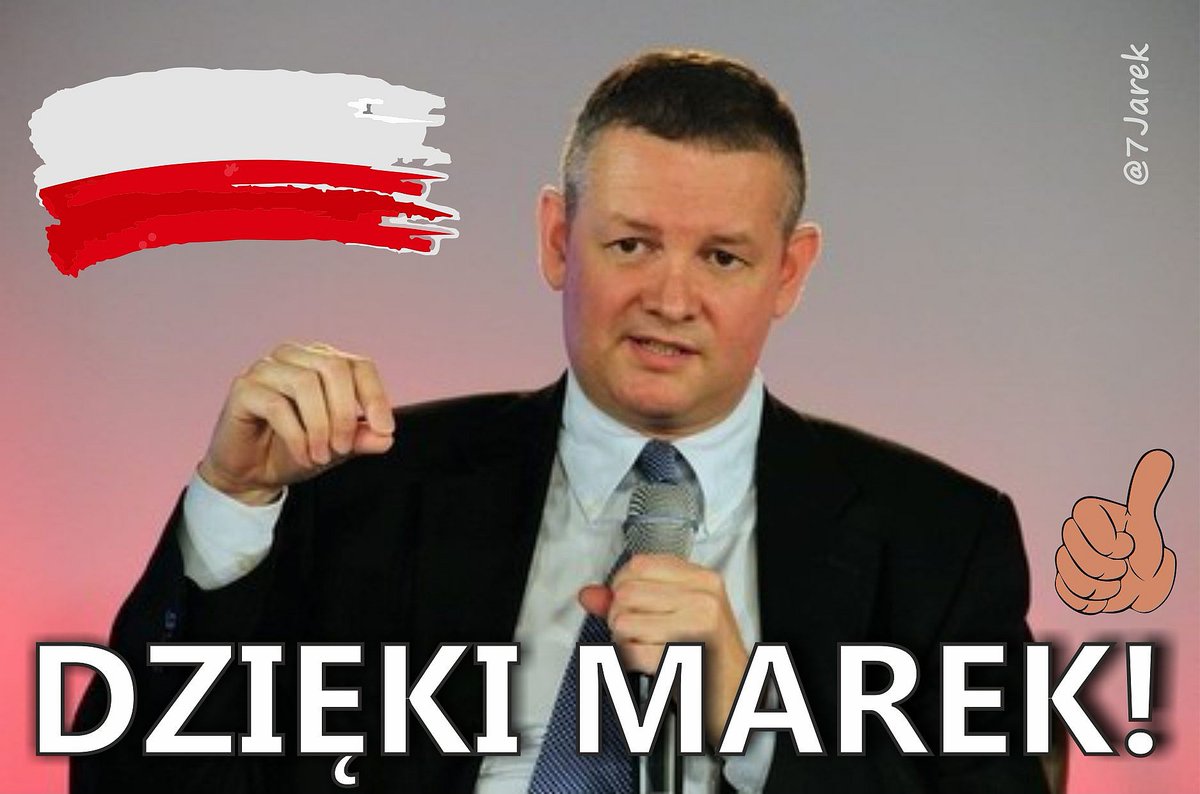 Despite calling Trump a "buffoon" in the past, Marek Chodakiewicz looks to further the far-right in Poland through associations with the President.

Chodakiewicz has shot to prominence since the Trump visit and is enjoying cult hero status in far-right circles. Memes of Chodakiewicz complete with the Polish flag and the words Dzieki Marek (Thank you, Marek) were common. Far-right groups have also rounded on Rafal Pankowski, the co-author of this piece, for pointing out Chodakiewicz’s extremist ties.

The right-wing media also conveniently used the post-Trump hoopla to go on a witch hunt against public figures, including Polish rock star Zbigniew Holdys who was listed as an “enemy of Western Civilization” by the pro-government, right wing media. Tomasz Lis, Jacek Żakowski and Adam Michnik — three prominent liberal journalists—were also smeared as enemies. Government-controlled television vilified the foreign editor of Gazeta Wyborcza, Bartosz Wielinski, (who had contributed critical comments on the Trump visit in The New York Times and CNN) as “worse than a Nazi collaborator.”

Several days after the Trump visit, the government passed draconian laws effectively abolishing the independence of the judiciary. Other controversial measures are expected to follow.

The European far-right was delighted at the electoral success of Donald Trump in 2016, and this year’s speech in Poland, and its repercussions, emboldened them once more.