As another trial stemming from the 2014 antigovernment extremist standoff with the Bureau of Land Management begins, attorney Larry Klayman fears a nefarious cabal inside the government is once again undermining liberty.

It wasn’t the decades of flagrant disregard for the rule of law regarding public lands in the West that left Cliven Bundy and other members of his family facing a host of federal charges. It wasn’t the family’s role in organizing and carrying out an armed standoff with federal agents trying to serve a court order in 2014, or the armed occupation of federal buildings with the help of armed militia members in Oregon a year later.

If you ask Larry Klayman, the notoriously litigious attorney who once claimed President Obama was a crypto-Communist Muslim, the legal problems surrounding the Bundys are little more than a targeted campaign fueled by racial resentment. 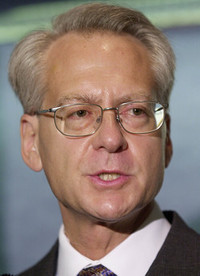 In an article published last week on WorldNet Daily, Klayman claimed the prosecutions show the hand of the “deep state” at work in seeking retribution for racist comments made by the Bundy family patriarch. The comments were reported by The New York Times on April 23, 2014 –– two weeks after the family and its militia supporters forced the Bureau of Land Management to abandon plans to serve a court order to confiscate the Bundy cattle herd as payment for more than $1 million in past grazing fees and fines.

After the standoff, which energized the antigovernment movement nationwide and led others to challenge public lands laws, a triumphant Bundy began holding daily news conferences that often veered into unvarnished views on his personal philosophies.

“I want to tell you one more thing I know about the Negro,” Bundy said at one such news conference, recounting the first time he saw public housing projects in North Las Vegas. Bundy said he remembered seeing homes with people sitting on porches with “nothing for their young girls to do.

“And because they were basically on government subsidy, so now what do they do?” he asked. “They abort their young children, they put their young men in jail, because they never learned to pick cotton. And I’ve often wondered, are they better off as slaves, picking cotton and having a family life and things, or are they better off under government subsidy?”

After the Times published the comment, a tide of supporters including state and federal politicians who had fallen behind the family quickly backed away. Klayman, however, remains convinced that those comments are the reason charges were eventually brought against members of the Bundy family and their supporters.

The political prosecution of Cliven Bundy, his sons and tens of other defendants is an outrage begun by President Barack Obama and his Justice Department, then run by former Attorney General Loretta Lynch, essentially because Cliven used the word ‘Negro’ in commenting that he and his family could appreciate how African-Americans were mistreated by the federal government, given how this same federal government, under Obama and Lynch, with the aid of former Nevada Sen. Harry Reid, had attempted to enslave them, too.

Klayman’s argument comes as four defendants –– Scott Drexler, Richard Lovelien, Eric Parker and Steven Stewart –– face charges stemming from the April 2014 standoff of conspiracy, assault on a federal agent and various weapons charges in a trial that began Monday in Nevada. But fueling his outrage is U.S. Attorney General Jeff Sessions declining to intervene on behalf of the Bundys.

During a speech last week in Nevada, Sessions complimented Nevada acting U.S. Attorney Steven Myhre for his work on the case. But his commentary stopped there.

“I’ve got to tell you, it’s impressive when you have a tough case, a controversial case, and you’ve got the top guy leading the battle, going to court, standing up and defending the office and the principles of the law,” Sessions said. He added, “I’m not taking sides or commenting on the case. Just want to say that leadership requires, a lot of times, our people to step up and be accountable.”

Sessions’ point on standing for “the principles of the law” seems to have been lost with Klayman, who claims to have met with Sessions to ask for a “review of the Bundy prosecution in an unbiased fashion,” arguing that it had begun for “political and retaliatory reasons.” When nothing happened, Klayman says he became convinced Sessions was “compromised.” By whom is unclear.

“It became clear that Jeff, with all his problems –– he is under constant attack by the leftist media and rabid Democrats –– simply went into a ‘defensive crouch' and thus punted his commitment and referred me instead to the very Obama Deep State prosecutor who has been and continues to engage in prosecutorial misconduct, too numerous to list in this column,” Klayman wrote.

If Klayman’s involvement in the three-year-old prosecution surrounding what the radical right calls “The Battle of Bunkerville” seems sudden, it’s not his first attempt. Last year, a Nevada judge refused to let Klayman join Bundy’s team, citing Klayman’s long “practice of impeding the ethical and orderly administration of justice.”

For example, convinced that the Clinton administration was up to its ears in conspiracies and corruption, Klayman filed at least 18 lawsuits between 1992 and 2000 against the president, first lady and other administration officials. A federal judge in 2010 dismissed the last of Klayman’s Clinton-era suits.

But Klayman’s interest in Bundy’s case is real –– if not a little surreal. He has even started fundraising for the Bundy legal defense.

And as always, the stakes are grave.

“While its [sic] now clear that even the attorney general has been compromised, and that Cliven’s prosecution will proceed in the next few months, the good news is with your strong support he can wage a full and aggressive legal defense, not just to protect his rights but the constitutional rights of all of us to be free of government," Klayman wrote.