In a series of Tweets Wednesday morning from his personal Twitter account, President Trump stated that "the United States Government will not accept or allow Transgender individuals to serve in any capacity in the U.S. Military." Anti-LGBT groups including hate groups who've advocated for this policy celebrated the announcement.

The statement comes just days after the Republican-controlled House voted down an amendment to a defense spending bill that would have banned the military from funding any medical treatment related to gender transition. The amendment would have impacted currently active transgender personnel as well as transgender dependents of service members. 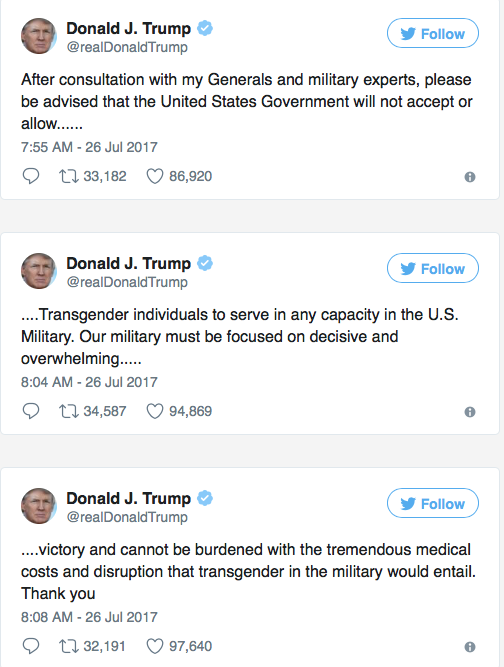 Though that amendment was not adopted, Defense Secretary James Mattis already had delayed an Obama-era policy that would have implemented a process for allowing transgender people to enlist. Slated to begin July 1, Mattis delayed the policy until January 1, 2018. The Trump announcement reverses another Obama-era policy in which transgender people were allowed to serve openly in the military.

Estimates vary on how many transgender people are currently serving in the armed forces. A 2016 RAND Corporation study puts the numbers at a low end of approximately 1,300 to 6,600 on active duty with an additional 1,500 in the Reserves, while a 2014 Williams Institute study estimates that number at 15,500 (combined active duty and Reserves). The RAND study determined that the cost of gender reassignment surgery for troops who wished to pursue it would be between $2.4 million and $8.4 million, an infinitesimal fraction of the Pentagon’s multi-billion dollar budget. A 2015 study in the New England Journal of Medicine reached similar conclusions.

According to the Los Angeles Times, a Pentagon spokesman described Trump’s Twitter posts as “new guidance” rather than an order, and said the Pentagon would issue “revised guidance” to the military “in the near future.” The Times also reported that Defense Secretary James Mattis was out of Washington and on vacation this week and that the Pentagon appeared caught off guard by Trump’s Twitter pronouncements.

Congressional Democrats, as well as several senior Republicans, offered strong support for transgender individuals serving honorably, and condemned the President’s Tweets. “I don’t think we should be discriminating against anyone,” Sen. Orrin Hatch (R-UT) said in the Times. “Transgender people are people and deserve the best we can do for them.”

It’s unclear whether the transgender troops already serving would be purged.

Below, is a round-up of reactions from the anti-LGBT right. Groups marked with an asterisk are considered anti-LGBT hate groups.

[F]or keeping his promise to return to military priorities – and not continue the social experimentation of the Obama era that has crippled our nation’s military. …The last thing we should be doing is diverting billions of dollars from mission-critical training to something as controversial as gender reassignment surgery…As our nation faces serious national security threats, our troops shouldn’t be forced to endure hours of transgender ‘sensitivity’ classes and politically-correct distractions like this one. 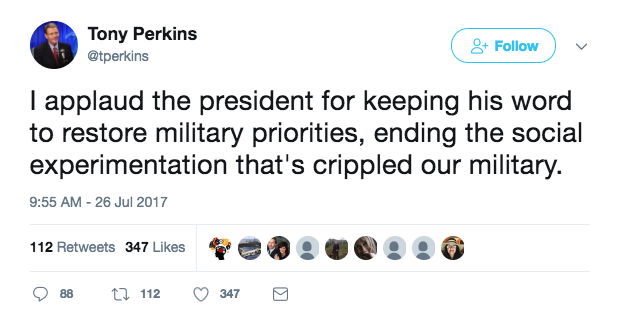 American Family Association* applauded the president’s “courageous decision to end the usage of our military for social engineering and political correctness” in an Action Alert sent out via email.

American Family Association-Indiana also supported Trump’s decision, stating that it is the correct one:

The purpose of the military is to defend the US, not to be a test tube of liberal social experimentation. Those accepted into the military need to be mentally stable, mentally able, and mentally capable. A gender identity disorder is a mental disease that needs counseling, not camouflage.” The statement went on to say that the “far left and their allies in the media are going to flip out over this news,” and that, “Homosexual activist demonstrators may well become violent. 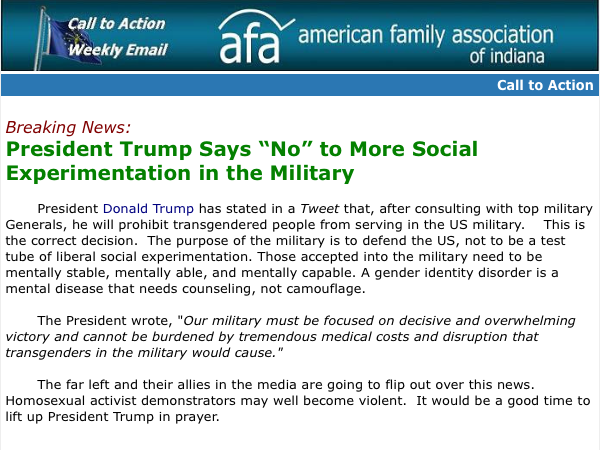 The Catholic League Tweeted, “Kudos to Trump for banning men and women who switch genitals from the military. The armed forces are not a lab for sexual engineers.”

Illinois Family Institute*, a state affiliate of AFA, posted a piece on their website by its cultural affairs writer Laurie Higgins in support of the decision, saying, “Finally, a president who listens to the voices of reason, wisdom, and military expertise rather than to the cacophonous, incoherent voices of fools, Leftists, and military-antagonists.”

Gender dysphoria,” Higgins continued, “leads to profoundly destructive actions that have moral, political, social, and military ramifications. Gender dysphoric men and women…seek to invade the restrooms, locker rooms, showers, shelters, semi-private hospital rooms, nursing home rooms, and sports teams of persons of the opposite sex. They seek to impose hefty fines on citizens who refuse to refer to them by pronouns that correspond to the sex they are not. They seek to force all citizens to pretend that men can menstruate, become pregnant, and ‘chest-fed.’ They offer children as sacrifices to Moloch.

Higgins moved on, referring to trans people as “biological-sex-rejecting persons with perverse desires,” who are attempting to “impose their twisted, truth-denying vision of human nature on the rest of our young soldiers.”

Liberty Counsel* claimed in a press release titled “Trump Says No ‘Transgenders’ in the Military,” that Jonathan Alexandre, director of public policy at the Counsel, “met with White House officials and discussed the issues, stressing the importance of the President’s power to direct his generals to prioritize unit cohesion and military readiness rather than sacrificing them to the demands of the transgender lobby.”

I applaud President Trump for making American safe again,” Liberty Counsel president Mathew “Mat” Staver said in the press release. “The military is a lethal weapon designed to protect America and our allies. It is not a social club, a social experimentation petri dish, or ClubMed. …The duty of military officers is to appropriately lead and prepare their personnel to serve and protect, and they cannot do that when there is confusion, dysfunction, and safety issues within the barracks.

National Organization for Marriage sent out an email that used the incorrect term “transgendered” rather than “transgender” in its headline. The group claimed that it “has helped lead a nationwide grassroots movement to oppose the gender ideology of former President Obama and the left, which has attempted to force the transgender agenda on the military, public school children and all institutions of government.” (“Gender ideology” is a right-wing conspiracy theory used to attempt to discredit and further marginalize LGBT people.)

The statement went on to say:

Mr. Trump is correct to cite not only the costs but the disruption that the transgender agenda causes. These gender-confused individuals are a tiny fraction of the population, yet everyone else is expected to succumb to their demands or risk being labeled a bigot, homophobe or worse. They expect school children, women and victims of sexual abuse to risk their safety and privacy by allowing biological men into intimate areas reserved for women and girls. Massive fake outrage has been manufactured by LGBT extremist groups and their allies in government, media, large corporations and big-time sports leagues against anyone who resists.

This will temporarily end, thank God, the threat to all women in the military of sharing showers with cross-dressing men, and men wearing women’s uniforms, and wasting tax-payer dollars on life-long hormone treatments or genital mutilation surgeries that actually harm the mentally ill more than they help. Trump got this right.