The Family Research Council (FRC) hosted Distinguished University Chair and professor of law Michael Stokes Paulsen (St. Thomas University) on July 21 at FRC headquarters. According to a July 18 email from FRC, Paulsen spoke “on the main controversies toward [sic] religious liberty due to society’s declining acceptance of the religious premises upon which the First Amendment was written.”

The FRC press release, however, dropped the word “religious” from the description and instead said, “due to society’s declining acceptance of the premises and assumptions on which the First Amendment was based.” The title of Paulsen’s talk, according to an outline available at FRC, was “Four Objections to Religious Liberty (and some Possible Answers).”

Paulsen is listed as an expert at the ultra-conservative Federalist Society, which promotes the idea that the Constitution should be interpreted using “originalism,” a doctrine that states that the basic meaning of the Constitution was set at the time of its original creation in the 18th century.

Paulsen has written in opposition to same-sex marriage, and claimed that LGBT people were not denied the right to marry prior to Obergefell, arguing that they could still marry someone of the opposite sex. “Religious liberty” is at risk, Paulsen continues: “If same-sex marriage is, as the Court has not said, a fundamental constitutional liberty, those who resist it are like segregationists resisting Brown v. Board of Education — forces of evil to be extirpated.” And, he continues, “Civil rights laws provide the bulldozer for eliminating such views.”

The piece goes on to claim that “homosexual rights advocates are rapidly pressing for more. Their goal is to stigmatize, delegitimize, and quickly extinguish opposition to the new norm, especially dissent grounded in religious conviction.”

FRC is known for its demonization of LGBT people, including linking them to pedophilia, and claims on its website that homosexuality “is harmful to the persons who engage in it and to society at large, and can never be affirmed. It is by definition unnatural, and as such is associated with negative physical and psychological health effects.”

MR claims to have opened a chapter in the UK. According to a post at its site, MR president Brian Camenker traveled to the UK June 29 through July 10 “at the invitation of MassResistance activists there for the launch of the group.” Camenker said he “met with national pro-family leaders and activists from around the country,” though he did not name them. He also claimed that “a big kickoff meeting in London highlighted the week” and that prior to the launch of the chapter, MR had “300 people in the UK.” 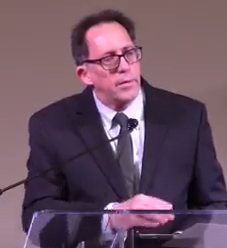 López, currently teaching at Southwest Baptist Theological Seminary, resigned his position at California State University-Northridge in 2016 amidst allegations of retaliation against students who accused him of creating a hostile learning environment. López has a long history of anti-LGBT activism and statements, including that the “gay lobby” (which he differentiates from LGBT individuals) is fascist, abuses women and children, is an engine of “world-historical evil” and that gay adoption means that “children become objects, and adults become slave-owners again.”

He has also claimed that there is an LGBT international war against black people, and that same-sex couples “purchase” children, which is tantamount to slavery, that  gay men sexually abuse their children and, in an amicus brief to the Supreme Court in 2015 that “gay marriage targets children of gay parents for discrimination” because it will “allow adults to acquire custody of other people’s children and deny those children connections to their original mother and father.”

Over the years, Brian Camenker has compared LGBT advocates in schools to Nazi camp guards; praised Nigeria for criminalizing homosexuality and LGBT rights advocacy; traveled to Jamaica to support the continued criminalization of homosexuality; launched an anti-LGBT smear campaign against a former Department of Education official; and claimed that homosexuality is a public health crisis.

Texas Values is touting the special session in the Texas legislature that began Tuesday, July 18, which resulted in the state senate’s passage of S.B. 3, the so-called “bathroom bill,” last week. The bill requires students in public schools to use the restrooms that match the sex on their birth certificates or state-issued ID. The bill also strikes down parts of city laws that protect the rights of transgender people to use public restrooms in accordance with their gender identities.

The anti-LGBT right has been targeting trans people with so-called “bathroom bills,” which ban people from using public restrooms and other facilities in accordance with their gender identities, thus further marginalizing them in schools and public areas.

The group was heavily involved in the 2015 campaign to repeal Houston’s anti-discrimination ordinance (HERO), ginning up fear of trans people to remove the policy, which protected religion, disabled people and veterans as well as sexual orientation and gender identity from discrimination. TVA released ads during the campaign, including one in particular that ridiculed trans people through animation portraying a hairy-legged man wearing makeup getting dressed in a women’s locker room. 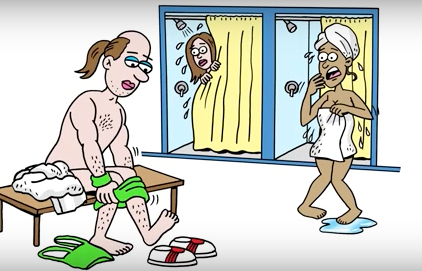 Supporters of an anti-trans initiative in Anchorage secured enough signatures to place it on the city ballot in 2018. The initiative, to be called Proposition 1, would require people to use public bathrooms or locker rooms that match their birth gender, subject to verification by the person’s original birth certificate.

Jim Minnery, executive director of Alaska Family Action (AKFA), was quoted in Alaska Dispatch News as saying that, “People are upset that the government is coercing businesses and churches to let men who identify as women in women’s private intimate facilities,” a statement that incorrectly conflates trans women with men and implies that trans women are somehow “dangerous.”

One of the two sponsors of the Anchorage initiative is Jim Minnery’s wife Kim, who has a long history of anti-LGBT activity and has helped spearhead two successful campaigns against anti-discrimination legislation that would have included LGBT people. Jim’s cousin, Tom Minnery, has a similar history. Retired now, Tom Minnery is president emeritus of Family Policy Alliance (formerly CitizenLink, which was affiliated with Focus on the Family). He was also a former senior vice president of government and public policy at Focus on the Family and a founding member and former president of the board of directors with Alliance Defending Freedom*.

In 2012, Jim Minnery was a leader of the so-called “Protect Your Rights — Vote No on Prop 5” campaign in Alaska. Prop 5, which did not pass, would have extended anti-discrimination protections to LGBT people. The campaign ran an anti-trans cartoon ad, including one in which a “transvestite” applies for a job at a daycare center. That ad was roundly denounced as stigmatizing and dehumanizing, including by former Alaska governor Tony Knowles. Minnery believes that there is a “homosexual agenda” to persecute and prosecute anyone who doesn’t endorse it. He also claimed that the 2015 LGBT anti-discrimination ordinance “legally invited men into public restrooms, locker rooms and dressing rooms” used by women and girls because the men will claim to identify as female.

AKFA also launched a campaign on April 11 against the nomination of Drew Phoenix, who is trans, to the Alaska State Human Rights Commission. In a Facebook post targeting Phoenix’s nomination, AKFA noted Phoenix’s work in support of the anti-discrimination Prop 5, which AKFA says, “proposed that men should be able to use whatever showers, bathrooms, etc. they want, consistent with their self-declared ‘gender identity.’” Conflating sexual predation with trans women is a harmful myth peddled by anti-LGBT groups.

The state legislature rejected Phoenix’s nomination in May, the only one of more than 100 gubernatorial nominees who did not receive confirmation. Minnery Tweeted, “AK Leg protects religious freedom and rights of conscience. Votes down transgender activist to sit on AK Human Rights Commission. Good job!”

A ballot initiative (I-183) has been proposed by the anti-LGBT Montana Family Foundation that would “require a person using a locker room or protected facility in a government building or public school to use the facility that is designated for that person’s sex.”  The MFF proposed the initiative after the state legislature refused to pass an anti-trans bathroom bill earlier this year (also supported by MFF).

Like other anti-LGBT groups, MFF uses debunked claims that the proposed legislation would protect children from sexual predators.

The MFF has a long history of anti-choice and anti-LGBT activism, and has opposed anti-discrimination laws that include LGBT people. The current president, Jeff Laszloffy, is a former state Republican lawmaker who left office in 2005 to head MFF. His daughter, Sarah, is also a former state legislator (2013-2017) who served as Majority Whip.

According to the Montana Human Rights Network (PDF; may not load in some browsers), MFF was started in 2004 by board members of the Montana Family Coalition who left that organization, thus affiliating themselves with the national group Focus on the Family and patterning themselves after FOTF’s state-level “family policy councils.” MFF became the leading religious right organization in the state, and MHRN reported that the MFF is the catalyst behind the 2004 campaign to ban marriage equality in the state.

Jeff Lazloffy, according to the report, also has a history of promoting antigovernment conspiracy theories, as in 1999 when he claimed the federal government was promoting socialism and invoked the 10th Amendment as a remedy (“Nullifiers” rely on a spurious interpretation of the Amendment to claim that states can disregard and ignore federal laws).

Lazloffy also supported a “birther bill” in the state in 2011 that would have required presidential candidates to file an affidavit with the Montana Secretary of State declaring that they met citizenship requirements. The rash of “birther bills” was in opposition to President Obama and stemmed from a conspiracy theory that Obama was not a U.S. citizen. Lazloffy testified in support of the bill, and though he claimed he was not representing MFF when he did so, he devoted an update at MFF on the “birther” topic.

In February of this year, Laszloffy noted that MFF argued against H.B. 417, which would have added sexual orientation and gender identity or expression to the state’s human rights law. “We argued,” Laszloffy stated, “as we have for 20 years, that the law would be used to browbeat Christians who don’t want to participate in the homosexual lifestyle.” He further claimed that including sexual orientation in anti-discrimination policies would cause Montana to recognize several gender identities and “allow men and boys unfettered access to women’s restrooms, locker rooms and shower rooms across the state.”

As noted above, Texas’s anti-trans “bathroom bill” S.B. 3 passed the state senate, 21-10 July 26 during a special legislative session. The bill was amended to prevent economic loss (via boycotts) by exempting government buildings—such as stadiums and convention centers—if they are privately leased. The bill restricts the use of bathrooms, showers and changing rooms in public schools and government buildings to match the sex on a person’s birth certificate or state-issued ID. The bill also prohibits cities and schools from adopting anti-discrimination policies with regard to bathroom facilities or allowing transgender girls or women to participate in women’s sports.

The bill passed after eight hours of debate, including opposition from chiefs of police in Austin, Houston and San Antonio, who said there were already laws against the type of behavior supporters of the bill alleged they were trying to prevent (male predators accessing women’s facilities).

The bill now heads back to the state house where it faces another committee hearing before being brought up for a vote.