A large Alt-Right gathering of assorted extremists — called “Unite the Right” — shows signs of being anything but a unity hug in the days leading to the August 12 rally in Charlottesville, Virginia.

Social media posts offer proof of backbiting, bickering and name-calling between some of the Alt-Right, neo-Confederate, anti-immigrant, Patriot, militia, Nazi and racist groups separately trying to organize contingents to attend the “unity rally.”

In a pointed post, the leader of one Patriot-style group was accused of adultery in an apparent attempt to undercut his leadership authority on the eve of the “unity rally.”

Another Patriot-style group — apparently perturbed by the grumbling, jockeying and potential for violence — says it’s now abandoning its plan to move its scheduled co-rally from South Carolina to Charlottesville on Aug. 12.

The “Unite the Right” organizer, pro-white activist Jason Kessler, got a city permit weeks ago for the rally to protest the City of Charlottesville’s plan to remove a statue of Confederate Gen. Robert E. Lee. 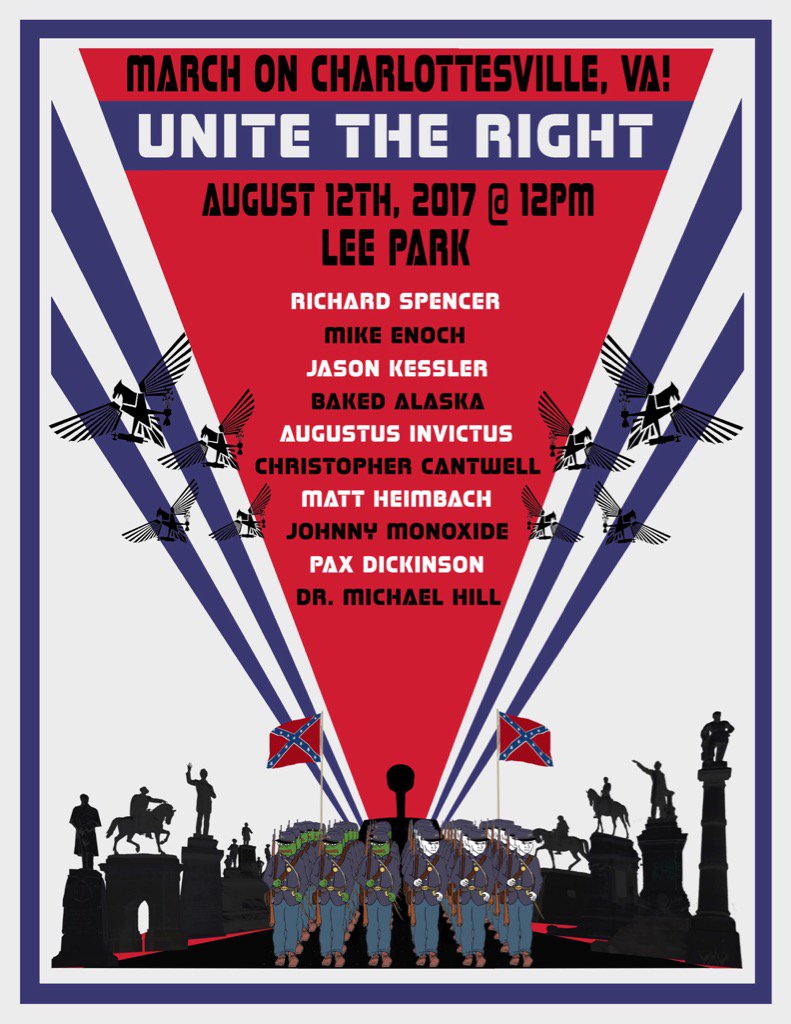 Then, the neo-Nazi National Socialist Movement said its members would be attending to “defend free speech and our heritage at the Lee Monument.” Also joining in are the League of the South leaders, as well as various anti-government, Patriot, militia, Klan, III Percenters and anti-immigration groups.

“I want an excellent turnout of Southern nationalists for this event,” said LOS president Michael Hill, telling his followers “don’t miss out of the fun” in dealing with expected counterprotesters.

Not to be deterred, various anti-racist, antifa groups, including some with track records of violence, and members of  Black Lives Matter also say they’ll be heading to Charlottesville.

Now, representatives of the City of Charlottesville are attempting to convince Kessler to move the rally from Emancipation Park to a more secure location, but he isn’t buying into that idea. Kessler is enlisting legal help from Kyle Bristow, a racist-activist attorney who heads the Foundation for the Marketplace of Ideas.

Bristow told the Roanoke Times that it would be “ridiculously unconstitutional” for the city to attempt to move the Unite the Right rally because of the building drama or public safety concerns.

So it seems the stage is being set to see who has the biggest megaphone, who draws the most attention in a crowd of hundreds expected for the Alt-Right feeding frenzy.

In these lead-up days, behind much of the drama and posturing is Brad Griffin, who runs the white nationalist website Occidental Dissent, appearing to love the limelight as he chants and promotes his new phrase, “Alt-South.”

“My way of doing things is to foster coordination instead of infighting, encouraging our people to become more active and aggressive while building social media platforms and real world networks,” Griffin wrote on his blog late last month.

“We need stable organizations that cater to various niche audiences,” Griffin said. “Instead of indulging in violent apocalyptic fantasies, we need to build networks, generate content and get more organized.”

But with various critical or mocking blog posts, it seems Griffin has done anything but “build networks.”

As he was promoting coordination instead of infighting in recent days, Griffin went on the radio show of David Duke, the legendary racist and former Ku Klux Klan leader, to talk about “the rise of the Zionist globalist faction in the White House and the Unite the Right rally.”

It’s that brand of blatant anti-Semitic rhetoric, Nazi swastikas and stiff-arm victory salutes that’s causing blow-back from others in the Patriot movement and those more focused on the Alt-Right agenda, including anti-immigrant, anti-Muslim campaigns.

In the lead-up to Charlottesville, the bickering among right-wing extremists apparently isn’t being taken seriously by antifa and anarchists with one website calling on all their supporters to show up, boasting: “We’re going to win.”

The site, saying it’s devoted to “anarchist, anti-fascist, autonomous anti-capitalist and anti-colonial movements,” said the Charlottesville rally is about “pox of white defensiveness” and “culture wars coming out of our isolated social media chambers and into the streets …”