Conspiracy-meister throws rally organizer Jason Kessler under the bus, then claims evidence of 'actors' in an ad from Charlotte, North Carolina.

It would probably be more of a surprise if Alex Jones didn’t have a false-flag conspiracy theory about the horrifying events in Charlottesville Aug. 11-12, especially considering that the alt-right rally attracted a sizeable and unmistakable contingent of violent white supremacists, not to mention that one of them embarked on a murderous act of domestic terror by ramming his car into a crowd of left-wing protesters.

The nation’s leading conspiracy-monger did not disappoint, either, spinning up a doozy of a theory to explain the presence and violent behavior of the white racists. From the start of the rally, Jones depicted the entire event as a concoction of conniving globalists intent on smearing Donald Trump and eventually inciting a mass civil crackdown. (Trump and Jones form a well-documented mutual-admiration society.)

As the theory evolved, like most of Jones’ fantasies, it became even more convoluted over time on his Infowars programs, and as other right-wing sites chimed in. Eventually, Jones began suggesting that Jason Kessler, the alt-right organizer of the Charlottesville “Unite the Right” event, was in reality a globalist/New World Order agent whose mission was to discredit the far right by “setting it up." He further supported these theories by claiming that he had uncovered proof that paid actors, pretending to be anti-racist protesters, were trucked in to Charlottesville under the financial auspices of right-wing bugaboo George Soros. 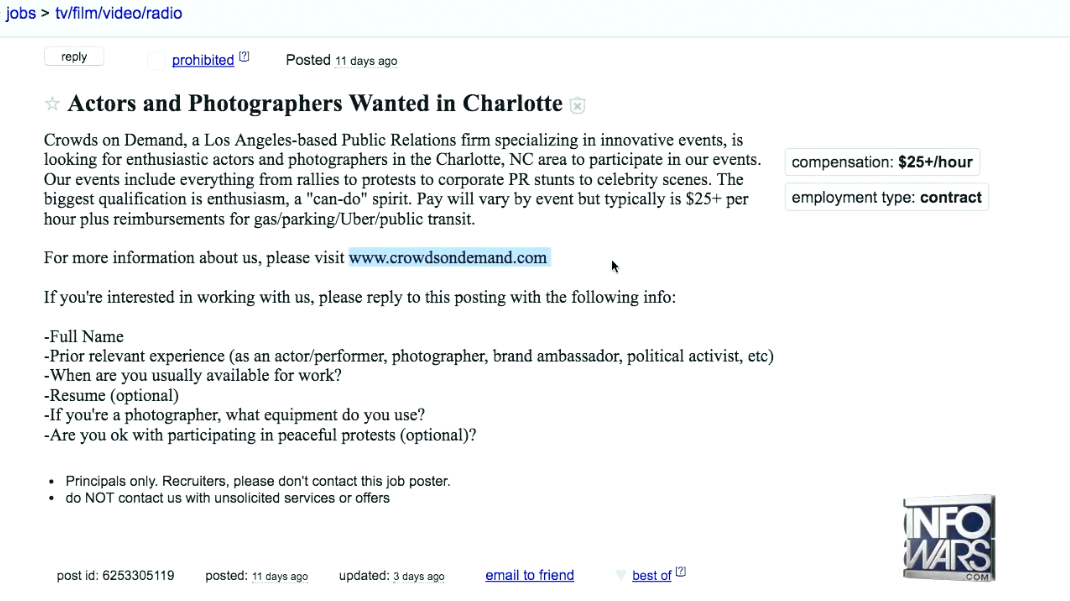 Jones and his Infowars team displayed this Craigslist ad from North Carolina as evidence of a plot in Charlottesville, VA.

There was only one problem with this latter theory: It was predicated on a Craigslist posting one of Jones’ Infowars reporters had uncovered about a company that specializes in hiring crowds of actors to appear at events. Jones leapt upon the post as proof that the anti-racist crowd had been inflated by the presence of “cut-outs.” But the Craigslist post in question advertised for an event in Charlotte, North Carolina, not in Charlottesville, Virginia.

For the record, Charlotte is 240 miles (a four-and-a-half-hour drive) distant from Charlottesville. As PolitiFact pointedly observed: “Both cities were named for King George III’s wife, Sophia Charlotte of Mecklenburg-Strelitz, but that’s about all the two places share.”

Nonetheless, Jones himself appeared to himself be confused about the difference between the two when describing his theory to the Infowars audience while displaying the ad.

“They come up and say, ‘You say, nothing was real in Charlotte, it was actors,” he said, before describing the plot. He later said: “But the point is, they say, we’re going to Charlotte – uh, ville, and we’re hiring people to agitate,” he explained.

Jones’ claim was based largely on a post at the blog Zero Hedge that similarly confused Charlotte with Charlottesville. No correction has appeared at the blog.

The theory that the Charlottesville rally was a “false flag” was embedded in Jones’ reportage on the unfolding events throughout the day.

“So they’ve got the Southern Poverty Law Center, who has been caught doing this before, to come in and get a few people from central casting, actors, to dress up, you know, like the white supremacists – there’s a ‘Unify the Right’ thing, don’t be racist event coming up, but also saying, support history, you know, they want to get rid of the Thomas Jefferson statue next, which they now want to do, and get rid of the American flag next.”

Watching the rioting unfold on his TV monitor, Jones launched into his stock in trade, red-faced ranting: “But see, it’s all about the conservatives getting beaten up, because they deserve it!” he shouted. “I told you it was all coming, and it’s just the beginning. And they’re gonna kill your president, and they’re gonna take your pension funds. They’re gonna piss all over you like North Korea, ‘cuz they want to!”

Jones managed to get Kessler on air the day of the protests, and he began suggesting then that Kessler might be getting duped: “Clearly, this is what the left wants to invoke. Why are people playing along with it?” More pointedly, he pushed Kessler, remarking: “I see, inherent manipulation being a puppet playing into this race game.”

The next day, he was more aggressive, grilling Kessler over his onetime liberal background, and openly suggesting on-air that Kessler had knowingly played a role in making the Trump-loving right look bad:

"Most of these attacks are false flags. And so I’m saying, here you are, a well-spoken guy who was part of Occupy, that’s deep globalist liberal ideology, then you’re part of Obama support, and then suddenly you realize you can’t beat the nationalist Patriot movement that’s gonna bring everybody together, with the leftist ideology that is racist against minorities and wants to control them. You couldn’t defeat them that way, and so you went and set all this up, and it was all perfectly ready, and timed, and meant to cause this, to try to bring down Trump!"

Kessler was aghast. “I’m not!” he protested. “Alex, don’t spread stuff like that!”

Jones soon claimed he had found stone-cold evidence, beyond Kessler’s background, that the event had been a “false flag” manipulated by globalists when reporter Gary Haiven came on Infowars with him and revealed the existence of the August 7 Craigslist ad for actors to help populate an event in Charlotte the week before the Charlottesville rally. The ad was generated by a company named Crowds On Demand, which Jones inferred likely had nefarious globalist connections.

Neither Jones nor Haiven or his cohost managed to observe that Charlotte and Charlottesville are two very distinct cities located a considerable distance apart, and that an event in Charlotte would be unlikely to be part of anything planned in Virginia.

For his part, the CEO of Crowds on Demand (which is based in Los Angeles), issued a statement to Snopes.com explaining: “We were not involved in any capacity with the recent tragic events in Charlottesville, Virginia. Our thoughts and prayers are with the families of those impacted by the violence.”

The narrative at Infowars, however, was set. Sometime Trump adviser Roger Stone filled in for Jones during the week, and laid out the theory for his audience. “This has the absolute feel of an astroturf effort by the Soros ops,” he said. “Jason Kessler, who appears to be the chief organizer, is identified now as a white supremacist, but not long ago, he was an ardent Obama supporter and working in the Occupy demonstration. …

“Then, what are we to make of the Craigslist ad that was found in Charlottesville, soliciting actors for an outside drama? This is beginning to be precisely what Wikileaks showed us happened in the campaign, where George Soros and his ilk financed a guerrilla operation, dirty tricks operations, to foment violence at the Trump rallies so that Trump could be blamed for that violence.”