After a speaking engagement at New York University (NYU) in early February was marred by violence, Gavin McInnes — leader of the Proud Boys (PB), a “fraternity” of “western chauvinists" — appeared on Newsmax TV’s “The Steve Malzberg Show.”

McInnes told Malzberg, “It was a really fun night, and overall I cannot recommend violence enough. It is a really effective way to solve problems.”

Beyond the obvious ignorance of such a statement — especially when now viewed against the August 12 racist rally-turned-riot in Charlottesville, Virginia, — McInnes has done much to perpetuate both the motivating animus and the viral capacity of political violence since President Trump’s election, including publishing videos on Rebel Media such as “Fighting ‘Anti-Fascists’ is Fun!” Violence is even built into the structure of the Proud Boys hierarchy; the highest level of membership in McInnes’ organization, called a “Fourth Degree,” can only be achieved once a member has engaged in violence with antifascists.

And last January, a video of McInnes went viral after he was filmed punching and shoving a counter-protestor outside of the Deploraball held in Washington, D.C.

But in recent months, the tides have begun to shift against McInnes and his fraternity.

Shipping Up to Boston — Or Not

McInnes is waffling on his endorsement of violence after the chaos that unfolded at “Unite the Right” in Charlottesville. The maelstrom left 35 injured and one dead after a rally participant drove his car into a crowd of people, killing 32-year-old Heather Heyer.

McInnes cancelled his own appearance at a rally set for Boston last weekend, blaming the city’s mayor for changing the “context” while ignoring that he presides over a group that has melded the fetishizing of political violence into its identity, one that is supposedly ready to fight their opposition at such rallies. His theory that the city’s mayor would allow his fellow demonstrators to be attacked was laid bare — 30,000 to 40,000 counter-demonstrators dwarfed a hodgepodge of right-wing rally goers during a largely peaceful day.

His Boston cancellation was announced Monday, after reminding his Twitter followers on Saturday that the Proud Boys had “disavowed” — and after he had previously appeared to walk back his initial disavowing — the Alt-Right and all other attendees of “Unite the Right.” McInnes statements are designed to put clear space between his group and the racist right, as some in the media and blogosphere have questioned the true nature of the PB. 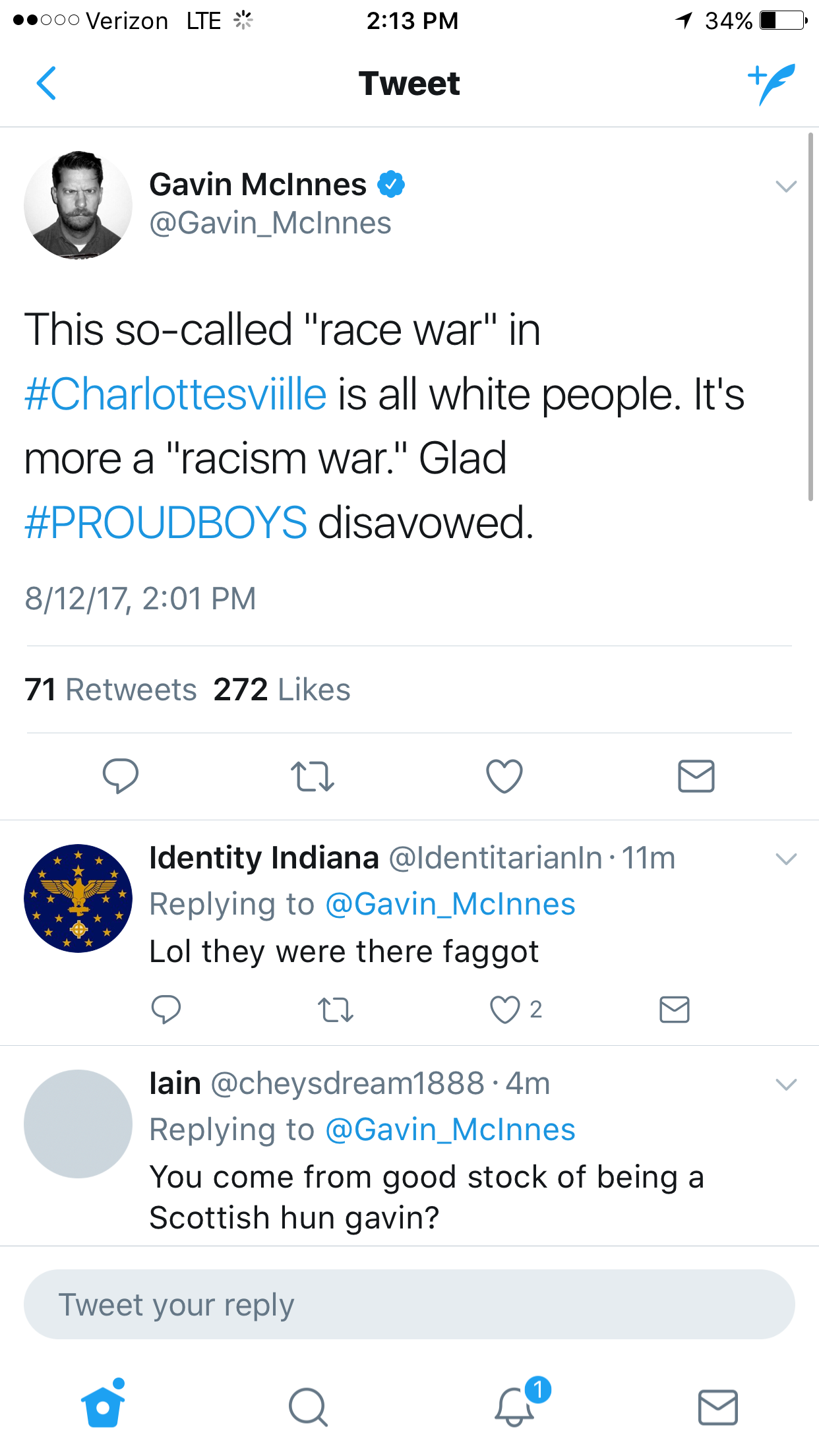 Further proof of the PB dance with white nationalists, however, came last week, when a Periscope video resurfaced on the Twitter feed of the antifascist website It’s Going Down.

The since-deleted video seemed to evidence that not long before McInnes’ recent disavowals, some Proud Boys and members of the Alt-Right got familiar with one another. That video, originally broadcast two months ago by the Alt-Right VA Periscope account, was titled, “#Proudboys,” and showed Kessler submitting to the PB  “Second Degree” ritual, during which he was continuously punched in the body by PB members until he finished naming five breakfast cereals.

Several PB appear in the video, recognizable by their black Fred Perry polos with yellow piping — a uniform the clothing company itself has taken a firm stance against. 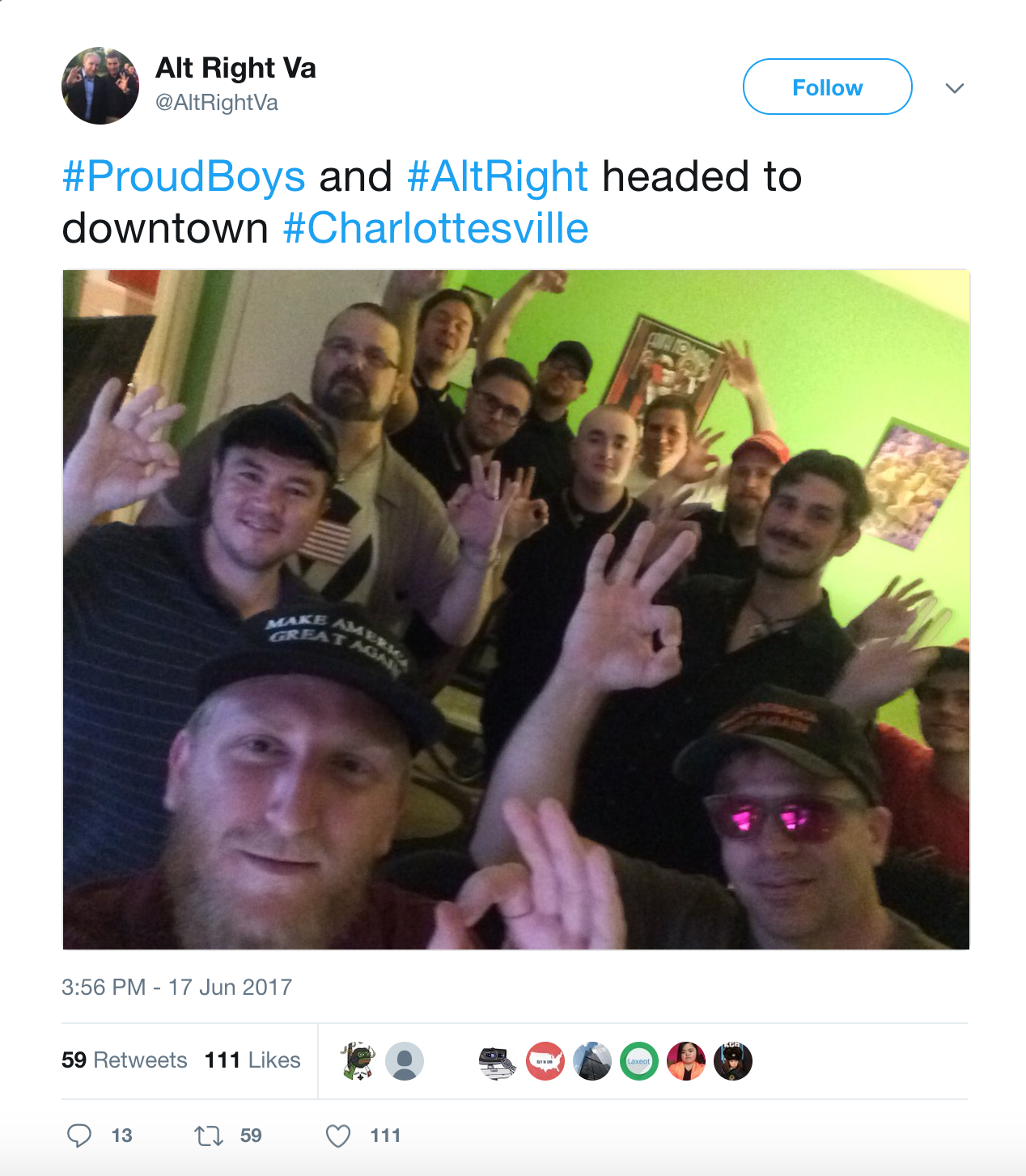 Working for the Clamp Down

Watching his based boys pal around with Kessler in an alley might have been a breaking point for McInnes.

Of late, he appears to be growing increasingly confused about which way is forward for his group — and confused about the politics and worldviews held by some of its members and/or associates.

Are the PB only interested in fighting with far-leftists when police are present (see McInnes “context” complaint above)? Or, do members of the group simply want to return to demonizing Muslims without so much media scrutiny?

Are the PB just an irony-fest of anti-PC juvenilia, barroom romping, and fisticuff larping? Or, are they a serious force for hard-right intimidation and political will?

McInnes has, yes, expended energy — low energy, albeit — over the last few months trying to distance himself and his organization from the white supremacist rally in Charlottesville and its organizers, such as Jason Kessler, and all other leaders of the racist right. And before Unite the Right on August 12, McInnes tried to clamp down on PB members considering attending the Charlottesville rally. Bold delimitations were issued.

But, ignoring his admonitions, some of his cohort attended, including the Fraternal Order of Alt-Knights.

The Fraternal Order of Alt-Knights (FOAK), launched this spring, is something of an affiliate chapter of the Proud Boys. Kyle “Based Stickman” Chapman, upon FOAKs launch, described the group as the “tactical defensive arm” of the PB, while McInnes has labeled it their “military division,” complete “with its own bylaws, constitution, rituals and vetting process.”

FOAK is apparently led by Chapman and others like Augustus Invictus, who was scheduled to speak in Charlottesville, where some FOAK members wore tactical vests adorned with the group’s patch.

An article published to the PB online magazine four months ago further underscores the connection between the PB and FOAK: “Proud Boy founder and local gossip Gavin McInnes has co-signed the move and immediately endorsed Chapman as the man to lead FOAK.”

Chapman, unlike McInnes, attended the rally last weekend in Boston, apparently while legal troubles loom over him.

Last week the Alameda County, California, District Attorney’s office filed a felony charge against Chapman related to his role in violence that occurred at a rally in Berkley that took place on March 4.

Chapman may have skipped Charlottesville, but one PB/FOAK member who didn’t was Brien James.

In a video posted to Facebook on June 12, James, the founder of one of the country’s most deadly and criminal racist skinhead crews, the Vinlanders Social Club, claims that he is the Indiana contact for the PB and the Fraternal Order of Alt-Knights (FOAK).

James once boasted that the Joint Terrorism Task Force maintained “a mile long” intelligence file on him and that he has "been tried for attempted murder and multiple batteries and hate crimes."

Footage taken at the Charlottesville riot appears to show that Brien James was in attendance, as were other FOAK members. 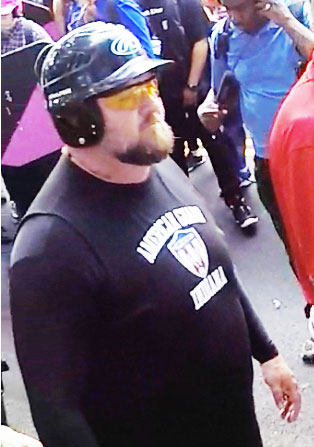 Brien James at Unite the Right in Charlottesville. Photo by Jackie Mercandetti.

Along with t-shirts that bear the slogan “White Pride,” James also sells the bumper sticker, pictured below, on the website of a clothing and merchandise business he owns and operates. 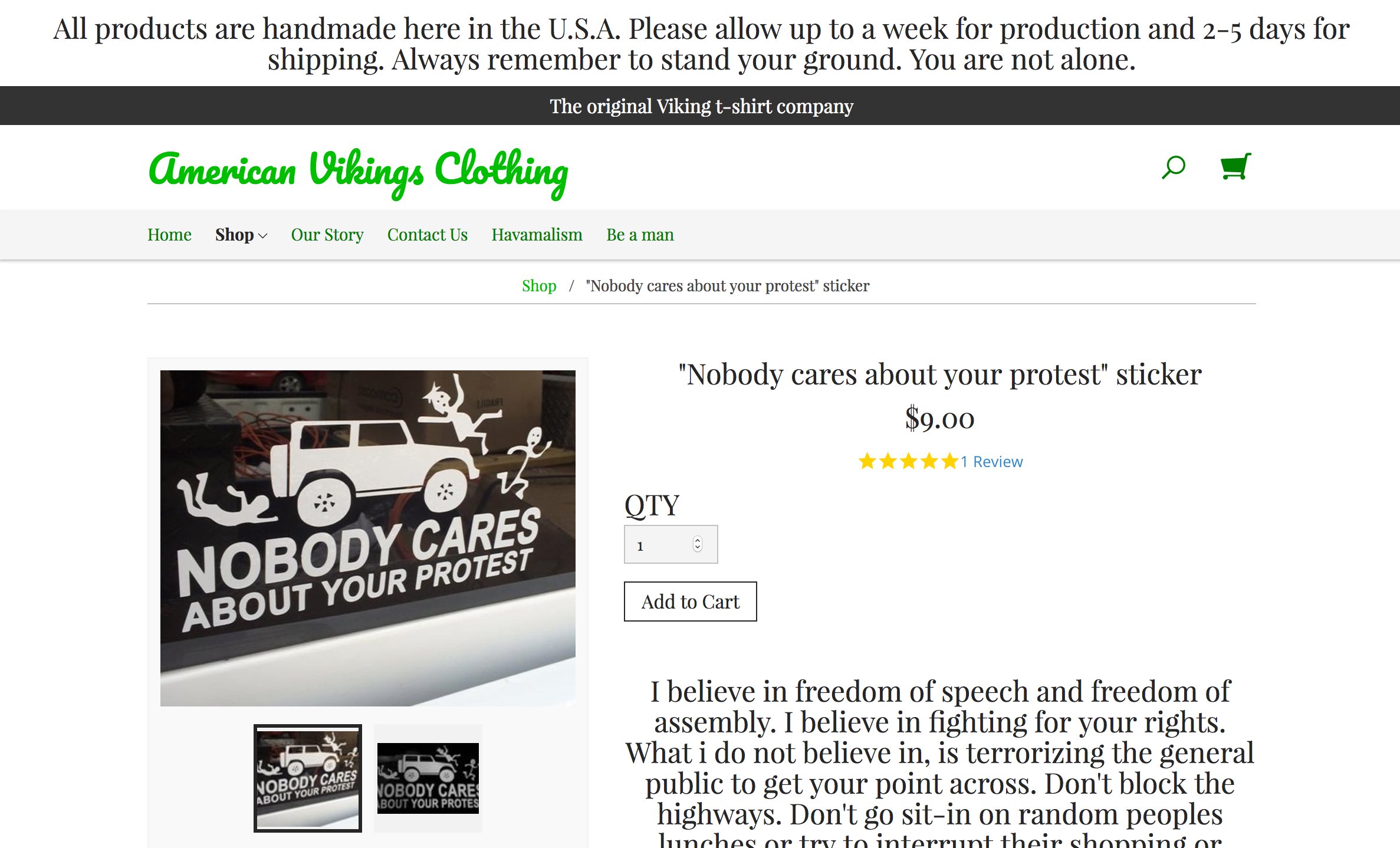 If the Proud Boys Aren’t United

An associate of the Proud Boys-NYC chapter, Gabriel Brown, who we also noted in last week’s article, was in Charlottesville.

The Twitter account for the group NYC Antifa published a photo of Brown in Charlottesville. He was also captured in other footage, blending amongst counter-protestors and journalists while filming the riot. 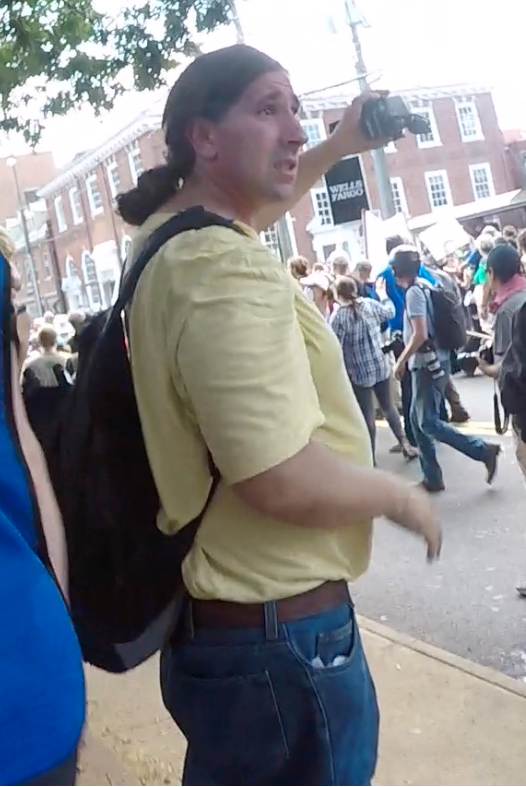 Salvatore “Sal” Cipolla, a member of the PB-NYC chapter, was also present in Charlottesville, where he mingled with and appeared to troll some of the attendees.

Cipolla also posted photos of himself with David Duke and Mike “Enoch” Peinovich to Facebook, for what purpose is anyone’s guess. 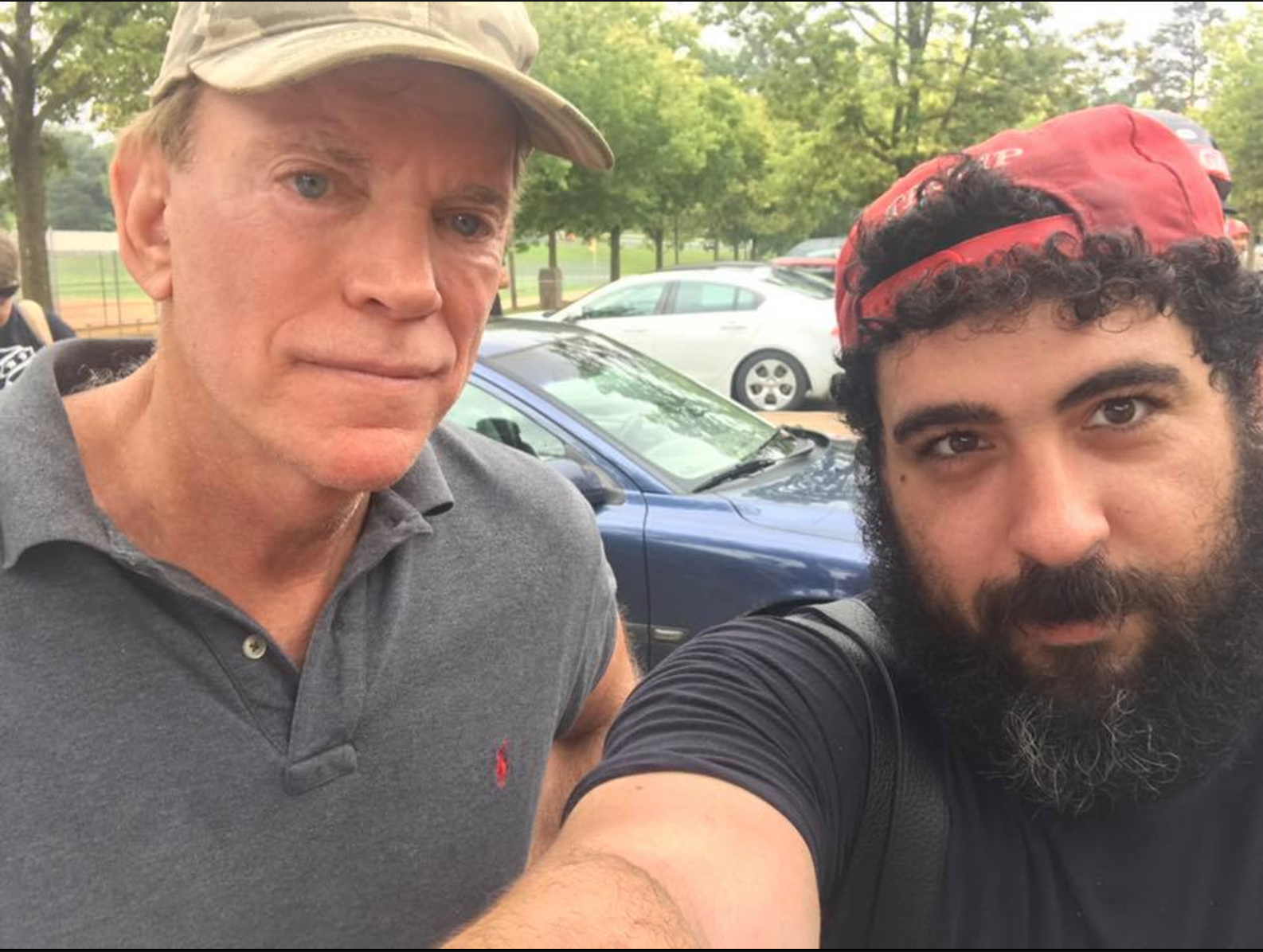 But then Mike “Enoch” Peinovich, of the anti-Semetic, white nationalist website The Right Stuff (TRS), gave insight, perhaps, into why someone from an organization that had denounced their rally was allowed into its confines. On “The Daily Shoah,” TRS's flagship podcast, Peinovich offered the following anecdote:

“On Saturday, a good friend, my old pal, NYC Proud Boy, he comes up to me at McIntire Park and is like, ‘Let’s get a selfie.’ And he shows his PB tattoo. He says, ‘Let’s get a selfie. I’m going to show the PB tattoo just to f--- with Gavin.’ Gavin has alienated his whole base. The whole PB organization, all the white guys in that organization are like, ‘Gavin, you’re being a f-----. You’re c------. What’s wrong with you?’ Like, he’s alienating his whole organization….”

Peinovich does not further identify the PB in question, but Cipolla — a prominent figure in the group — posted the following picture on August 13, the day after the riot, to his Facebook account. 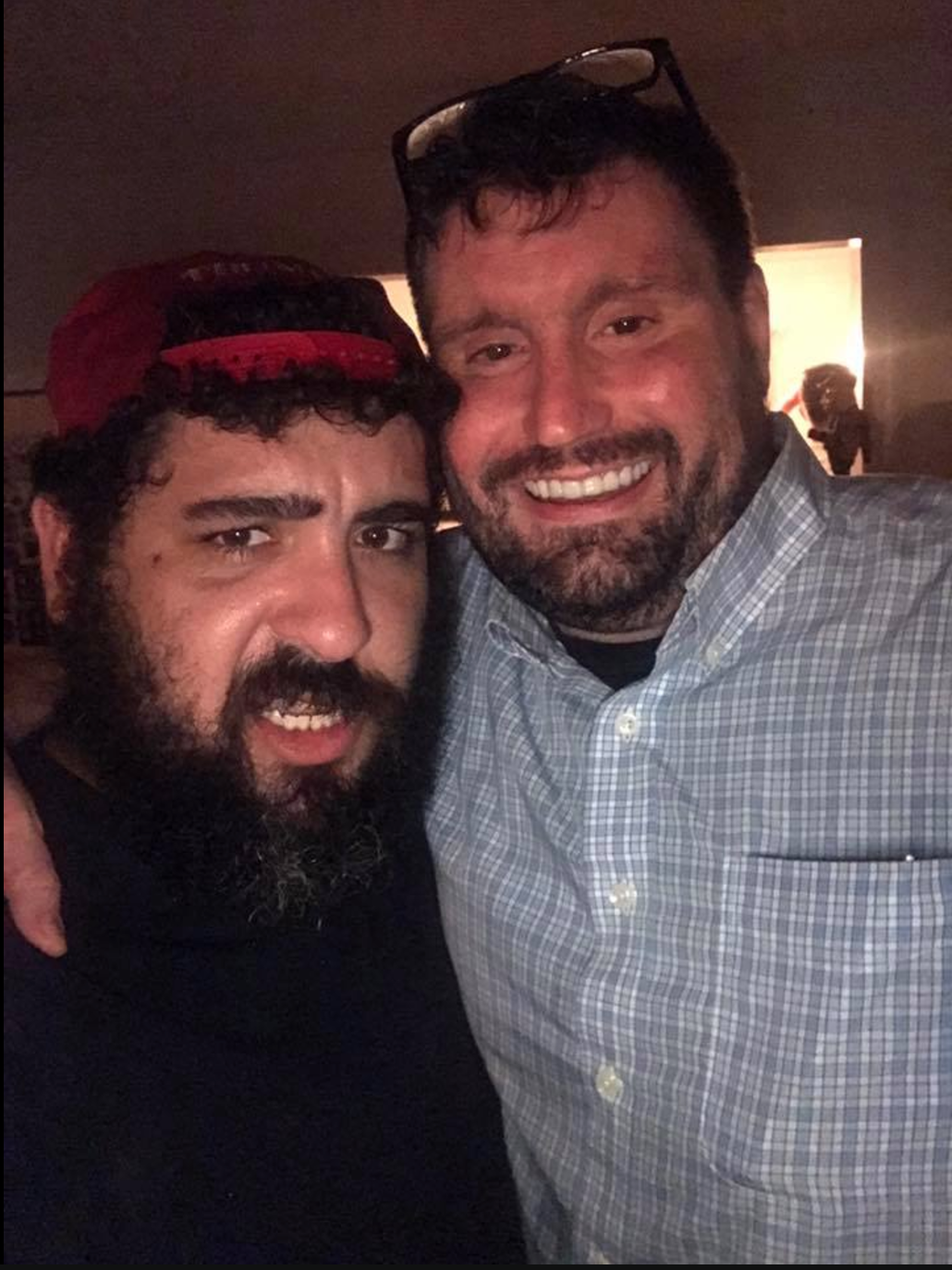 But then on August 17, Cipolla tweeted the following: 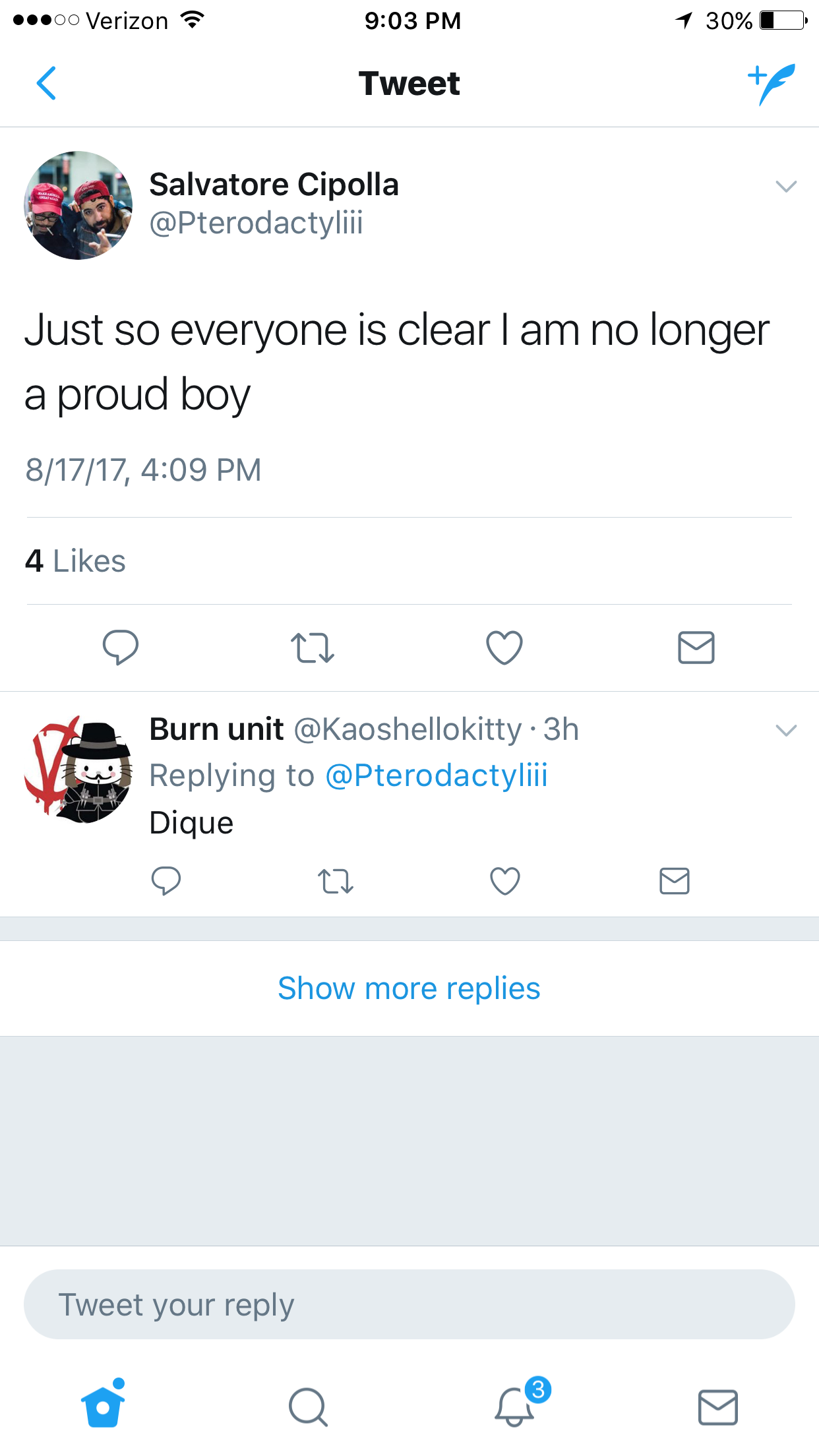 Questions about the PB, and FOAK, abound.

After describing the PB with him that night at NYU in February as “excellent fighters,” where Cipolla was among them, McInnes closed his segment with Malzberg by saying, “Fighting is fun. Fighting solves everything.”

Charlottesville, especially to those who loved Heather Heyer, clearly demonstrates the opposite.

It’s up to the Proud Boys and McInnes, in the streets and over social media, as to where their “fraternity” of “western chauvinists” goes from here.