Joey Gibson's 'Patriot Prayer' has trolled the Northwest with a series of rallies designed to provoke violence and populated with extremists, but he says he's changed his approach.

A “Freedom Rally San Francisco” is planned Saturday on the city’s waterfront at Crissy Field Park, from 2-5 p.m., organized as “a day of freedom, spirituality, unity, peace, and patriotism” by a group called Patriot Prayer.

Patriot Prayer is an antigovernment “Patriot” group based originally in Vancouver, Washington, and now in Portland, Oregon, that has organized a series of protests in the Pacific Northwest that have all been held in places that are established centers of liberal/left politics, all with the clear intent of attempting to provoke a violent response from far-left antifascists.

At his most recent rally, in Seattle on Aug. 13, Gibson openly denounced white supremacism and neo-Nazis. In subsequent interviews, he has taken lengths to explain that he now works to actively exclude them. There were no visible signs of white-nationalist members at the Seattle rally. 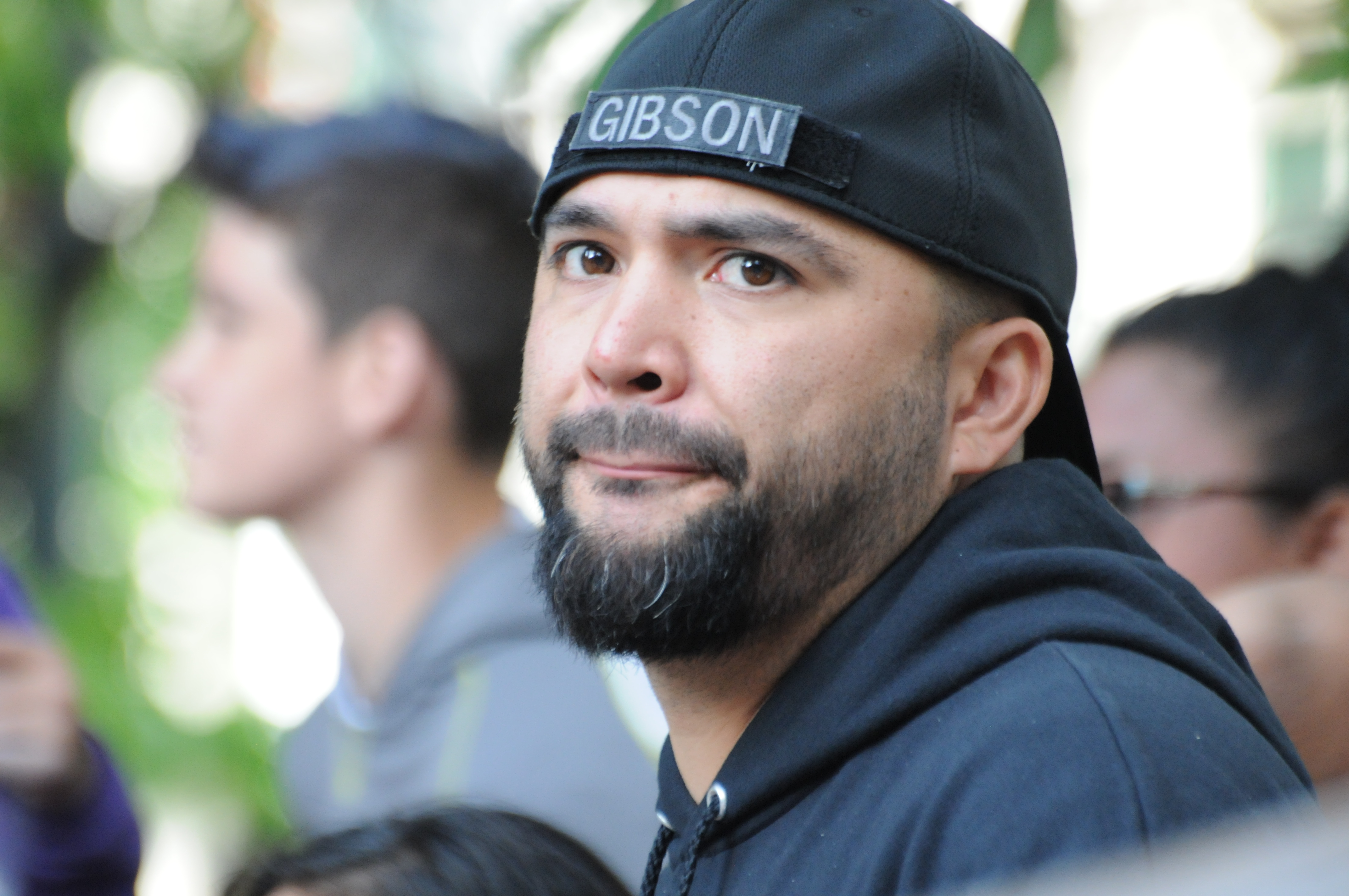 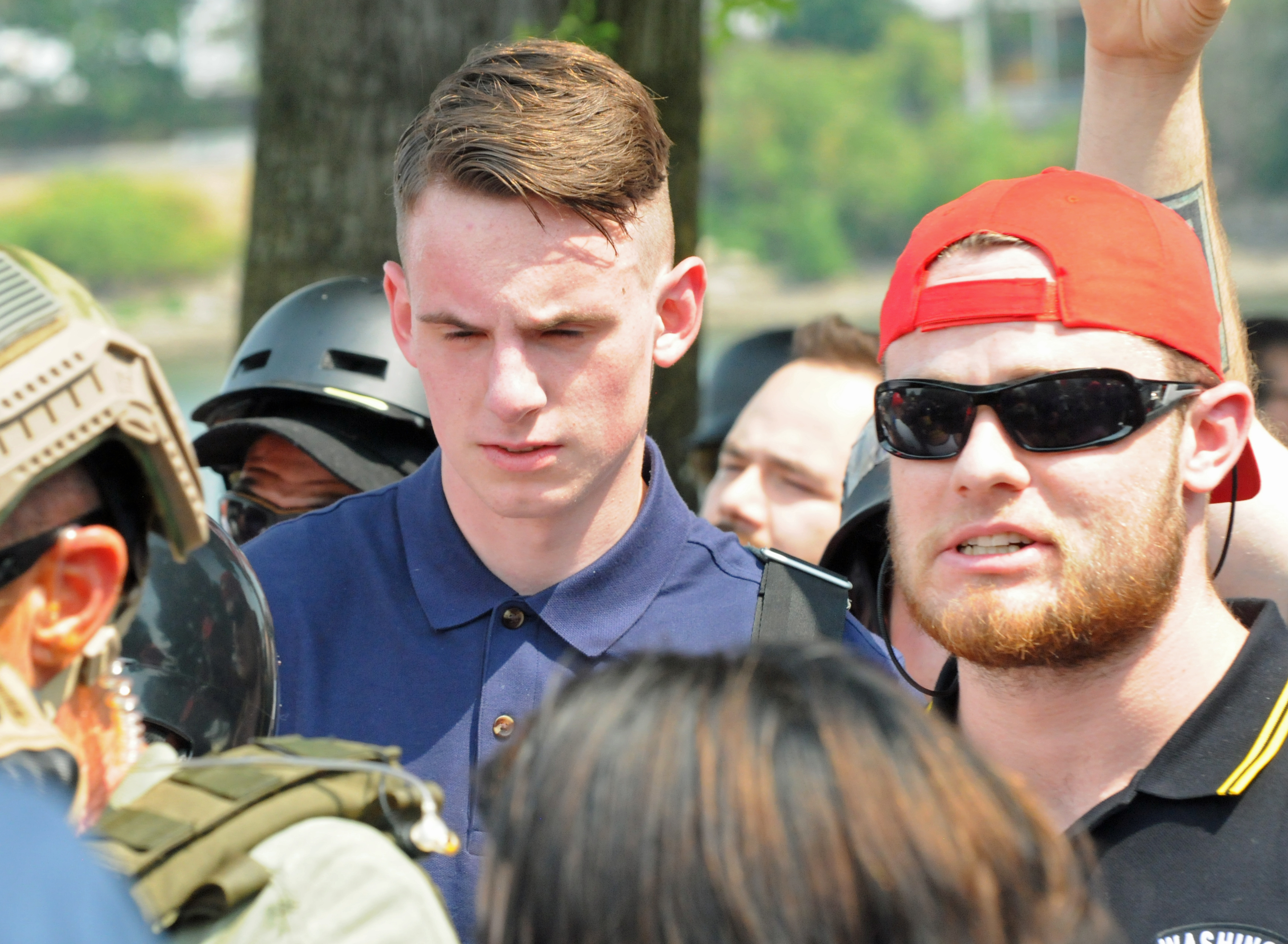 'Identity Evropa' activist Jake Von Ott was active in the crowd all day on August 7 in Portland. Photo by David Neiwert.

Just the week before, in Portland on Aug. 7, a rally led by Gibson featured numerous members of Portland’s white-supremacist scene, including a contingent from the student white-nationalist group Identity Evropa. Evropa members were leading participants in several of the brawls that erupted.

White nationalists, skinheads, and other “identitarian” activists have been involved in all of Gibson’s rallies in Portland, though generally without announcing their presence.

One participant at an early Gibson rally on April 29 in Portland was 35-year-old Jeremy Christian, who brought a baseball bat to the rally and spouted racist slurs and Nazi salutes; Christian was asked to leave by AFK members. Less than a month later, Christian stabbed two men to death on a Portland commuter train after they came to the defense of two young women, one wearing a hijab, being harassed by Christian. At his arraignment, Christian shouted: “Free speech or die!” and “You call it terrorism, I call it patriotism.” 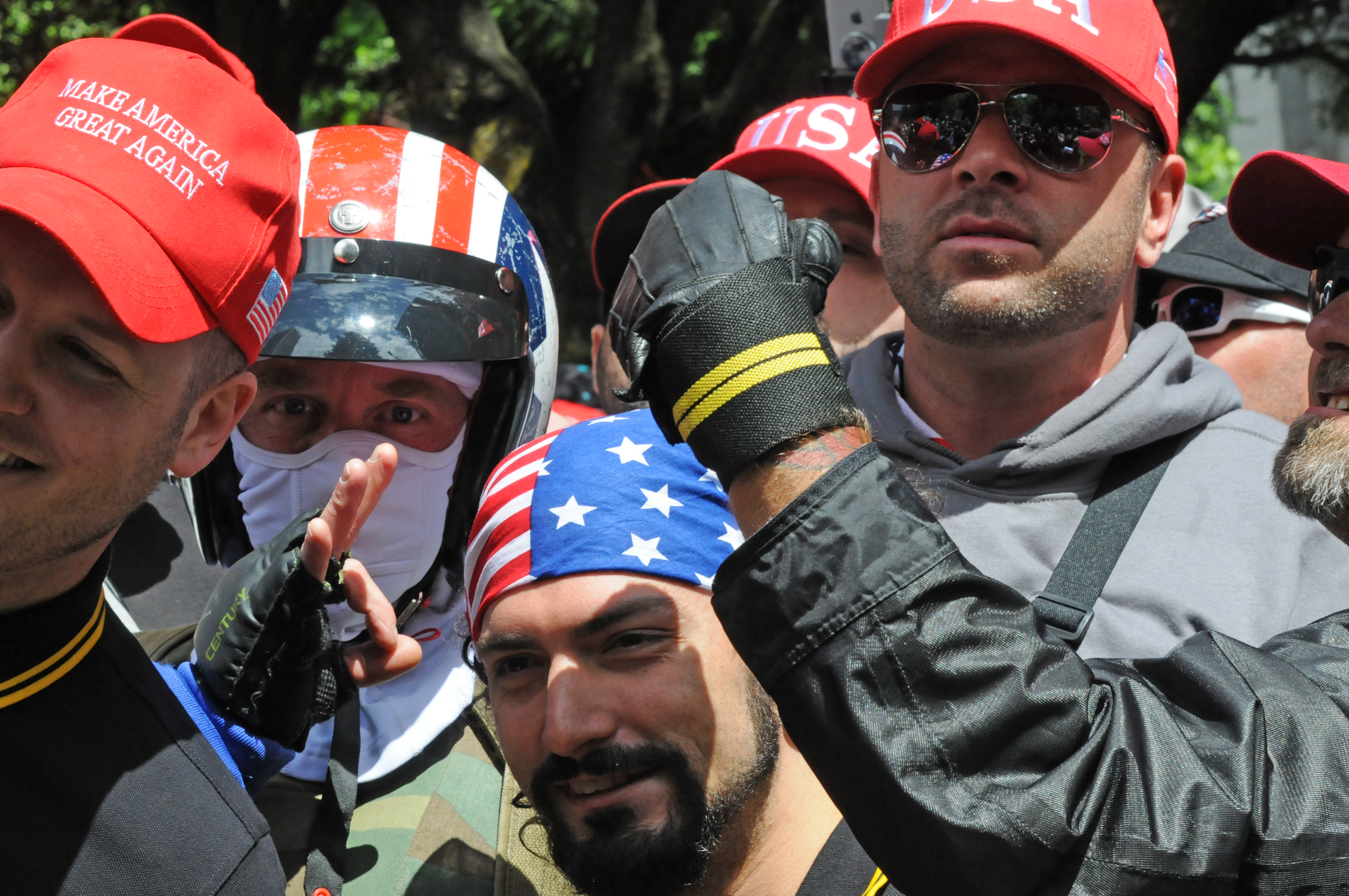 'Based Stickman' Kyle Chapman, scheduled to speak Saturday, mugs (third from left) with his fellow 'Proud Boys' at a Portland rally. Photo by David Neiwert.

Most of Gibson’s rallies have also featured the presence of  “Proud Boys,” whose origins and associations with white nationalists are disputed by some members.

While proclaiming that he is “all about love and peace” and is hoping to spur a dialogue with the opposing side, his participants have come with a variety of armor, shields, and easily converted weapons, such as flagpoles and bats, all of which have been used in the brawls that have erupted. A number of these fights have been instigated by the behavior of Patriot Prayer participants, though others have started with antifa protesters as well.

Gibson himself, while insisting he wants to spur dialogue, has given speeches at these events that flagrantly demonized liberals (he also has worn an Infowars “Hillary For Prison” shirt at events) and demonized Muslims. He proclaimed in one speech that Islam “is not a religion, it’s an ideology,” and went on to claim that discriminating against Muslims was not racism or bigotry.

The permit for the rally was approved Wednesday by the National Park Service, which oversees the park. Heavy restrictions were placed upon participants: no guns or weapons of any kind, no flagpoles, helmets, shields, pepper spray, or even selfie sticks will be permitted.

Gibson’s Facebook page proclaims: “No extremists will be allowed in. No Nazis, Communist, KKK, Antifa, white supremacist, I.E., or white nationalists. … This is an opportunity for moderate (A)mericans to come in with opposing views.”