Two weeks after the tragedy of Charlottesville, white nationalists rallying in Tennessee were outnumbered by anti-racists 50 to one.

“My God, just look at that horde of locusts,” said Tom Pierce. The 32-year-old Knoxville, Tennessee, white nationalist organizer as he stood next to a handful of members of the neo-Confederate hate group League of the South, holding rebel battle flags. The men stood beside a chunk of white stone memorializing the Confederate soldiers who died in a lopsided Civil War battle almost 154 years ago near what is now the University of Tennessee campus.

Across the street were about 2,000 anti-racist demonstrators, hurling jeers at Pierce and the band of about 40 white nationalists and other far-right activists who turned out for the “Defend Knoxville Confederate Monument” rally Pierce led on Saturday, August 26, two weeks to the day after the infamous “Unite the Right” rally in Charlottesville, Virginia, which led to chaos and violence, including the vehicular homicide of anti-racist protester Heather Heyer.

Unlike the militant racists who’d descended on Charlottesville 14 days earlier, however, the Knoxville demonstrators last Saturday were outnumbered by counter-protesters at least 50 to 1. The two sides were separated by metal barricades and hundreds of armored city, county and state law enforcement officers carrying long wooden batons and pepper spray guns.

“What do you think we should do, Tom?” asked one League of the South member.

Pierce pondered the question. Then he began to sing “Dixie,” the blackface minstrel show tune composed in the 1850s to defend slavery.

The League of the South members joined in full voice.

Oh, I wish I was in the land of cotton,

Old times there are not forgotten.

The response from the other side of the street was a deafening roar. “Dixie” was drowned out.

Hey-hey, ho-ho, this racist shit has got to go!

It was a bad day for white nationalists in Knoxville that only got worse.

Not only were the demonstrators on the Confederate memorial side of the street subjected to constant insults and shouted down by thousands every time they opened their mouths, they also began to read, with growing dismay, news alerts on their smart phones about two other far-right rallies also scheduled for last weekend. Those rallies, in Berkeley and San Francisco, California, both were called off at the last minute due to overwhelming opposition.] 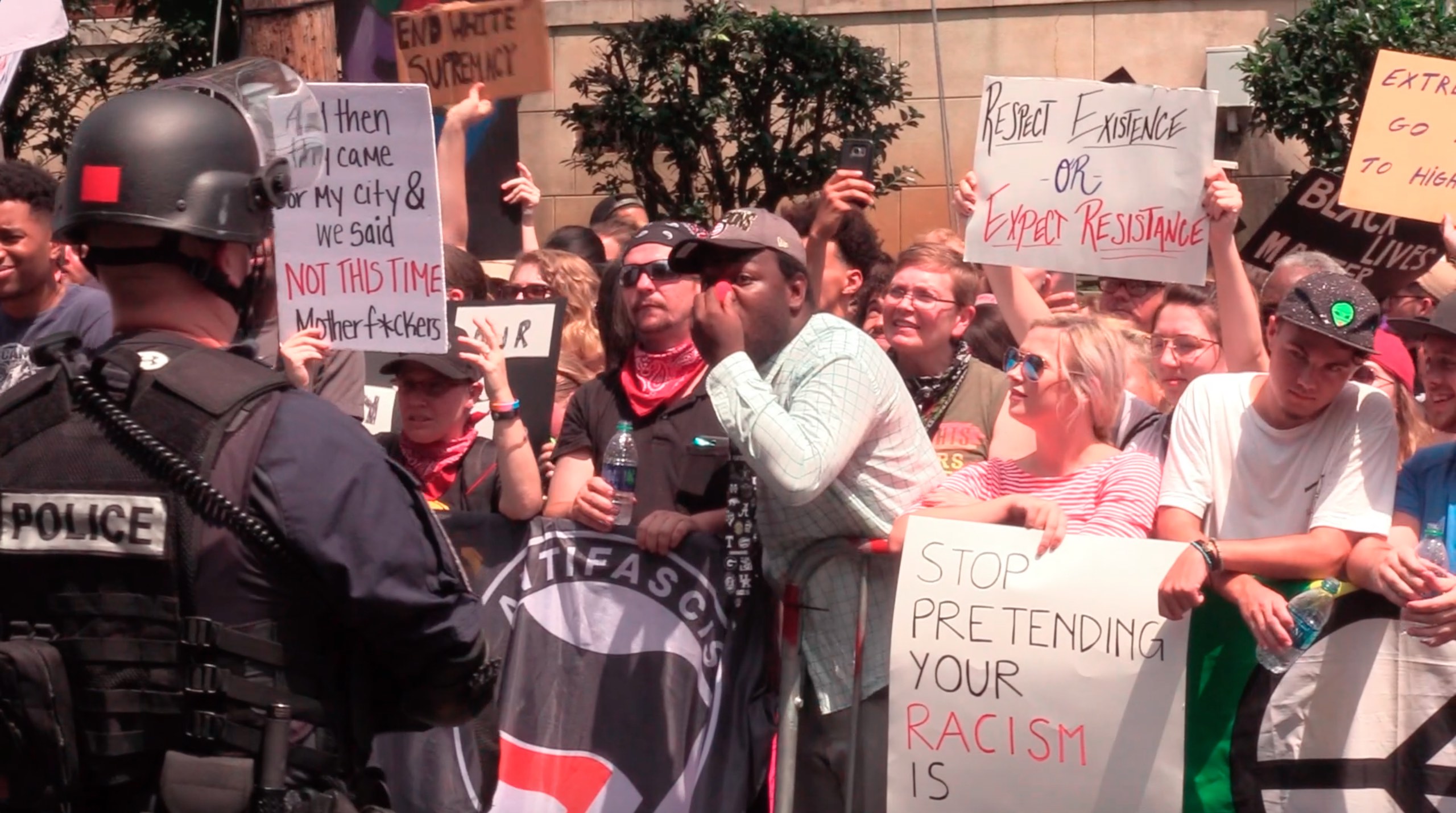 Anti-racist demonstrators outnumbered the white nationalists in Knoxville by at least 50 to one.

The Knoxville rally was initiated by Confederate 28, a Tennessee white supremacist group affiliated with the United Kingdom-based neo-Nazi organization Blood and Honour. Following a five-year hiatus, Confederate 28 resurfaced in June, protesting gay pride parades and distributing flyers and stickers in public. In July, Confederate 28 members attended a meeting of the Chattanooga, Tennessee, chapter of the Traditionalist Workers Party, a hate group led by Indiana-based white nationalist Matthew Heimbach, that played a major role in the deadly Unite the Right event in Charlottesville. Like the Knoxville rally, Unite the Right was promoted on the pretense of “defending” a Confederate war memorial.

Confederate 28 announced plans for the Knoxville rally in mid-August when a Confederate memorial near the university campus there was defaced with blue paint a few hours after a car driven by a neo-Nazi plowed into a crowd of anti-racist demonstrators in Charlottesville, injuring 35 and killing 32-year-old Heather Heyer.

The day before the Knoxville rally, however, Confederate 28 suddenly announced that it had “dissolved due to internal issues.” The group shut down its website and released a statement announcing that it had “suspended all projects and events, and we have no hand in the rally” planned for the next day. “The Knoxville locals have started their own rally, and have taken up the cause of defending their history,” the statement read.

A permit for the Knoxville rally was obtained in mid-August — when it was still being promoted as a Confederate 28 event — by “Dixie” song leader Pierce, a self-employed truck driver and self-described white separatist who ran last year for Knox County Commission. He lost, receiving only seven percent of votes. In campaign materials, Pierce identified himself as a board member of the Council of Conservative Citizens, a white nationalist hate group. He is also a former associate of the neo-Nazi skinhead group Volksfront. 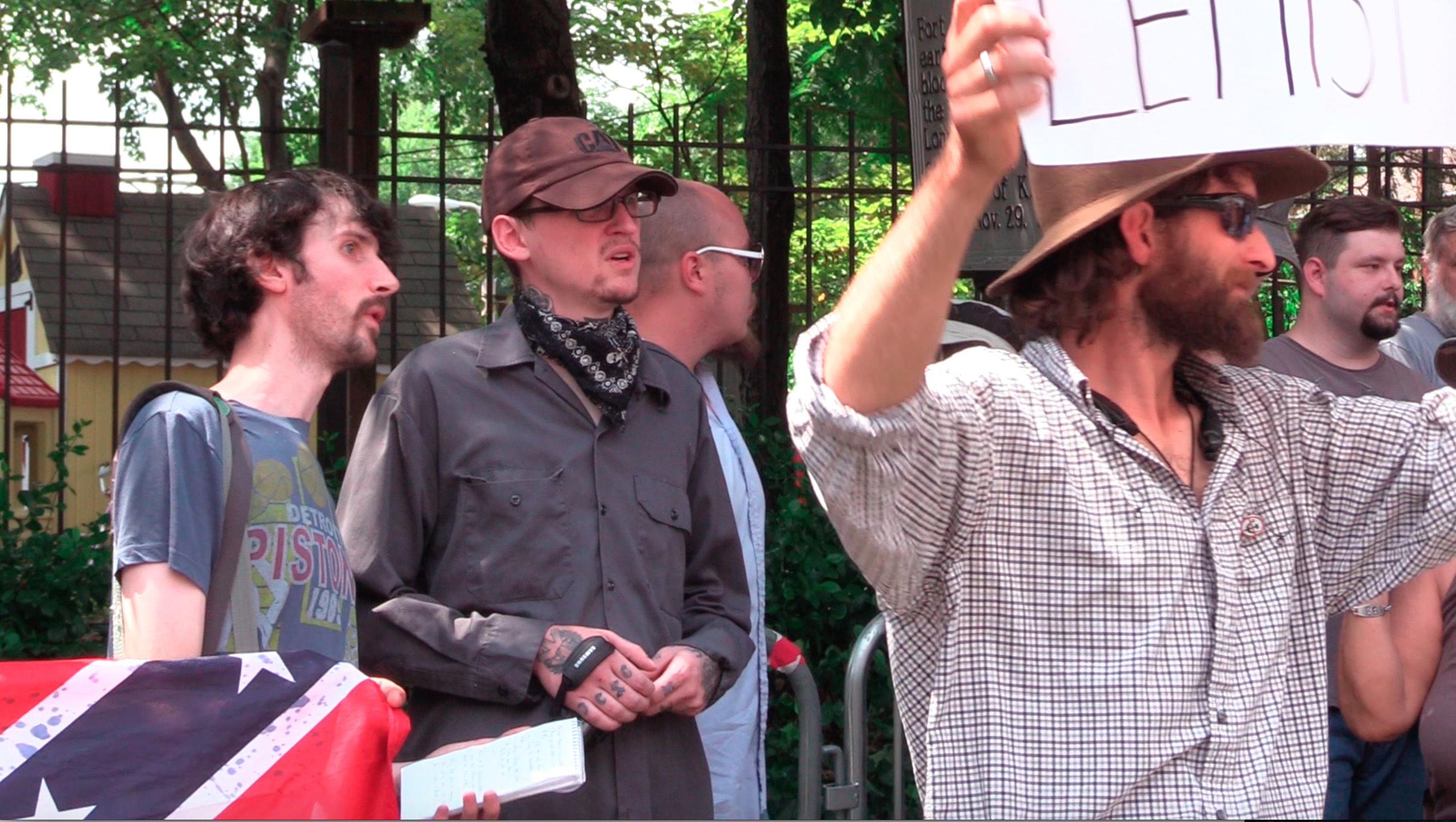 "Defend Knoxville Connfederate Monument” rally organizer Tom Pierce (right, with beard and sunglasses). The white nationalist in the dark gray, long-sleeved shirt behind and to the left of Pierce has a barely visible swastika tattoo on his left hand, and a more obvious logo of Volksfront, a neo-Nazi skinhead gang, on his right hand.

Despite the steamy weather in Knoxville, several white men in their 20s and 30s who showed up to rally alongside Pierce wore long-sleeved shirts buttoned above the neck. Another wore a conspicuous blue athletic band covering his right arm from wrist to bicep. Anti-racist demonstrators shouted accusations the men were hiding neo-Nazi tattoos. They waved fistfuls of cash at the man with the armband, offering him $1,000 to remove it and prove them wrong. He smiled and extended a middle finger in reply. One of the men in long sleeves had a tiny swastika tattoo on one hand. A Volksfront logo was tattooed on his other. 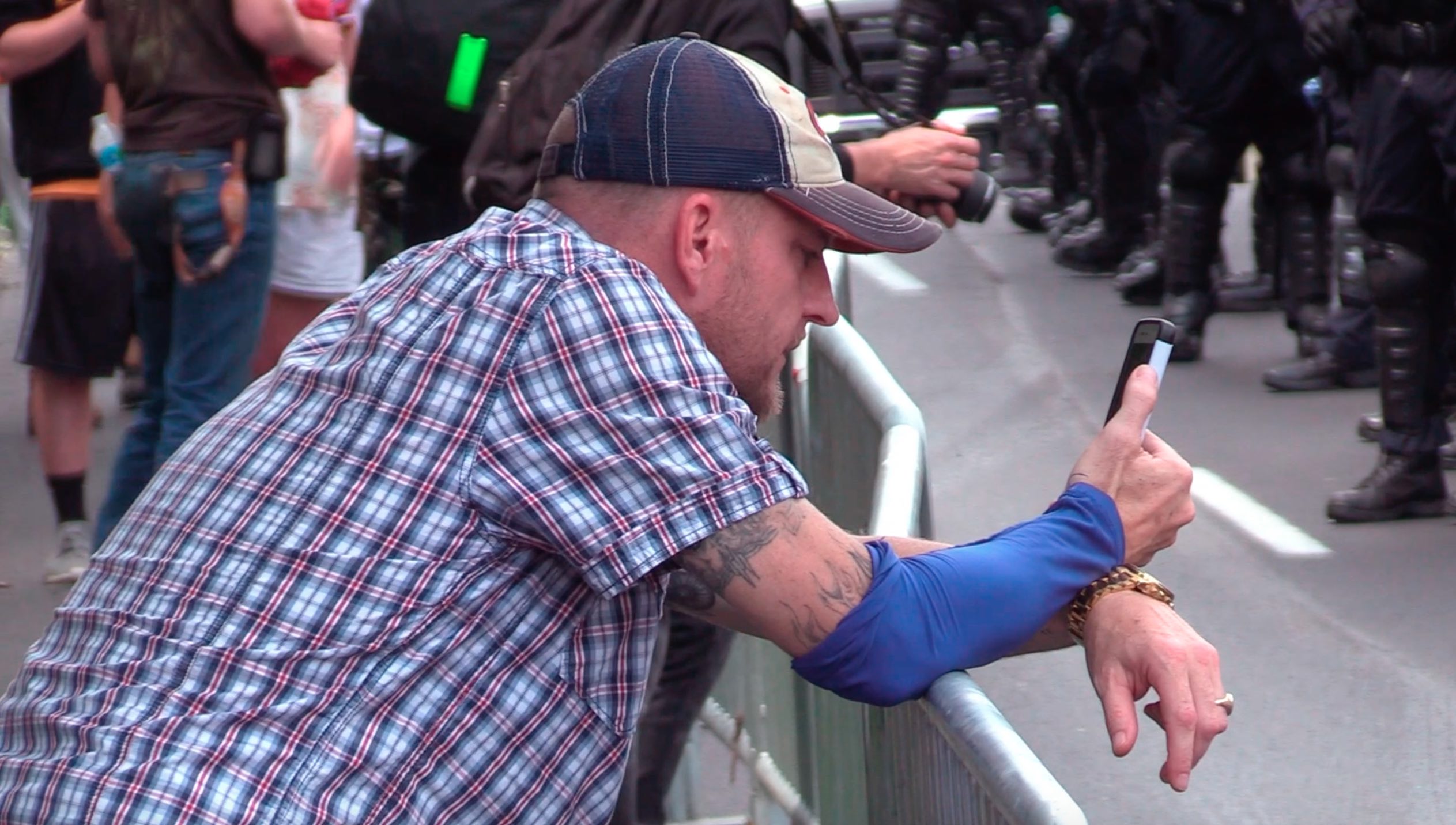 Anti-racist protesters offered this man $1,000 cash to remove his blue armband to prove he wasn’t covering a neo-Nazi tattoo. He refused.

Holding up a sign that read “Stand Against Leftist Hate,” Pierce denied any affiliation with Volksfront, Confederate 28 or the Traditionalist Workers Party. “Never heard of them,” he said. Pierce claimed he obtained the rally permit as a “private, unaffiliated citizen,” in hopes of “helping likeminded people deliver a message.” That message, according to Pierce: “Quit trying to replace us. Quit trying to destroy all of the things in America that represent Western Civilization.”

Those things include Confederate memorials and statues of Confederate generals, he said. “People say, ‘Oh, they don’t belong in public anymore, because they’re symbolizing history, so they should only be in museums,” he said. “But the Civil War isn’t history. It’s still happening today.”

Next to Pierce were two men dressed in ragged Confederate soldier uniforms, one of them barefoot. They nodded in agreement. “Damn straight,” one said.

Pierce continued, straining to be heard over the whir of a police helicopter and counter-protesters chanting, “Not in Knoxville!”

The Civil War’s still happening,” he said. “The same war of ideology and culture. It’s about identity and independence, and it’s about federal aggression and overreach. It’s about political correctness and forcing us to live by rules we don’t want to live by. They don’t like the fact that we don’t want transgender bathrooms, so they shove it straight down our throats. It’s the same war. It never went away. We’re just not fighting it with bullets and bayonets anymore. At least not for now. If we must, we will defend ourselves and our rights with force.”

Unlike in Charlottesville, none of the demonstrators on either side were openly carrying firearms, shields, clubs or chemical sprays. Police roadblocks shut off vehicle traffic for six blocks in every direction. Law enforcement snipers and spotters were in plain view on rooftops. Anyone on foot trying to enter the heavily guarded rally zone had to first pass through a checkpoint, where officers painstakingly searched backpacks and purses, ordered pockets emptied and used handheld metal detectors. The officers then directed people to one side of the street or the other by asking if they were “for the monument” or “against the monument.”

About an hour after the rally started, at least four African-American men and women declared themselves “for the monument” to access the white nationalist side of the street. The man with the swastika and Volksfront hand tattoos grabbed a police officer and pointed them out. “What the hell is Black Lives Matter doing on our side?”

The African-Americans walked as a group into the midst of 40 “pro-monument” demonstrators. They wore T-shirts with a green, yellow and red image of the African continent superimposed upon a Confederate flag below the words, “The New South.”

This did not go over well with the white nationalists. They surged to surround the interlopers. A man holding a cardboard Pepe the Frog sign (a popular alt-right symbol) shouted, “Baboons! Baboons!” League of the South member Garon Archer yelled, “The Southern nation is a white nation!”

Within seconds, riot police surrounded the “New South” counter protesters and hustled them out of harm’s way, barking orders at the white nationalists to make room. This led to a lot of grumbling but kept the peace. Archer, the League of the South member, held an impromptu news conference.

“This isn’t an African nation. We aren’t in Africa, and the African people aren’t the owners of the South. There is one Southern nation, but the Southern nation is White, and it’s Ango-Celtic,” he said. “Everyone accepts that African-Americans are a distinct group. I don’t have a problem with that. They have their own culture. They have jazz, blues, rap, they have soul food, so on and so forth. They have their own culture, their own people, and they’re proud of that. But when it comes to me, oh, I’m just an American. I’m a Southerner. I can’t have an identity that is connected to my ancestors and my blood, or at least that’s what the state tells me.”

Two weeks before he made the trip to Knoxville, Archer said, he went to Charlottesville to participate in Unite the Right, and was proud of it. “In Charlottesville, there were no white supremacists. There were only white nationalists who wanted freedom and sovereignty for their people,” he said. And white nationalists are non-violent unless provoked, according to him. “Yes, a woman was killed [in Charlottesville], but she wasn’t murdered. That was an accident. That man is not guilty. James Alex Fields [the neo-Nazi driver] did nothing wrong. His car was being attacked.” [Fields has been charged with second-degree murder.]

Archer said he was home. More or less. He’d driven to Knoxville from Johnson City, Tennessee, about 100 miles east. “They’re the ones who aren’t home,” he said of the thousands opposing him. “They don’t belong here. I don’t care if they were born in America, or have a piece of paper saying they’re citizens, or not, they don’t belong here … Identity has nothing to do with citizenship, or some ink on paper somewhere enshrined in a government hall. Identity has everything to do with blood, and ancestry, and land and history.”

Two-and-a-half hours after the rally began, a police officer using a bullhorn thanked both sides for peacefully exercising their First Amendment rights, then ordered them to disperse in opposite directions. The white nationalists filed past a University of Tennessee fraternity house where college students drinking beer and barbequing clapped their hands in mock applause.

“Y’all got your assed kicked,” one yelled. “Thanks for the show!”