Sixteen billion dollars from 15.4 million victims — that’s the total scope of identity theft in the United States in 2016 according to a study authored by Javelin Strategy & Research.

Released in February of this year, the second largest classification of theft is a miscellaneous one, “Other identity theft,” like, for instance, having your wallet stolen.

Alsbrook was recently named the interim police chief of Colbert, Oklahoma. That was until reporter Rachel Knapp of KXII Fox Channel 12 News began asking questions about whether the Bart Alsbrook behind a neo-Nazi hate music website was the same man who was about to assume the responsibility for protecting the town’s nearly 1,200 residents, who reside just miles from the state’s border with Texas.

Alsbrook distanced himself from the accusations and denied involvement with white supremacists, claiming that a group of skinheads stole his wallet in the 1990s and have been starting neo-Nazi hate sites using his personal details ever since.

But while the facts of that theft are vague, Alsbrook’s history in the organized white supremacist movement is clear. 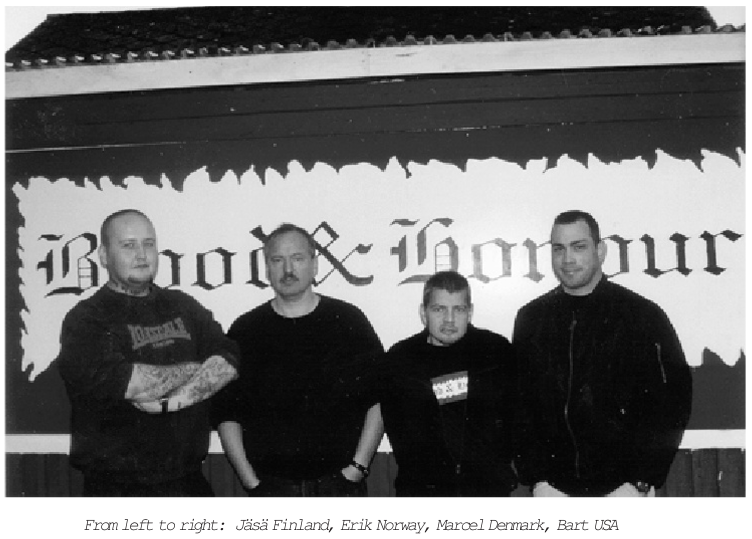 The above image appears in “Blood & Honour: The Way Forward,” a future-facing manifesto authored by a member one of the largest networks of organized racist skinheads in the world, Blood & Honour (B&H).

In the picture, Alsbrook — i.e. “Bart USA” — appears in front of a large B&H mural, flanked to his right by some of the network’s most important figures and propagandists. They are Mark “Jäsä” Järvinen, of the Ainaskin video production operation; Eric Blücher, the one-time owner of Ragnarok Records, an important hate music label; and Marcel Schilf, a legendary figure in B&H and former owner of NS88 Records and NS Records.

All four played instrumental roles in helping orchestrate the racist, neo-Nazi skinhead music business and the subculture around it, one designed as the recruiting ground of the foot soldiers of the coming race war. And each did his part to drive revenues into that scene for decades — and into one of its most dangerous corners.

That corner is Combat 18 (C18), the street-fighting force turned terror cell born from B&H’s mother chapter in England in 1992, with some help from Harold Covington, an American racist lurking in London during that time. Covington’s writings and ideas would prove seminal for C18’s founders, particularly Charlie Sargent, who along with another member would later murder C18 supporter Chris Castle.

Steeped in the doctrine of “leaderless resistance,” C18’s nickname, the “Terror Machine,” has been well-earned.

The group is responsible for innumerable acts of violence, even against those within its own scene, murder, assassination and terror plots, and allegedly influenced the National Socialist Underground, a group at the center of the historic terror trial currently underway in Germany. C18 has apparently influenced other terrorist plots and helped to inspire Douglas Copeland, who was convicted in 2000 for his 13-day campaign of terror during which he exploded nail-bombs in various neighborhoods and locations central to London’s minority communities.

The aforementioned manifesto contains a chapter focusing on C18, both the threat and promise it holds:

And the name C18 still has an aura of fear to it that must and will be exploited. […] For all its problems and few faults we should stick by C18. They have, like the American Order, brought the struggle beyond the pathetic paper routines, the hysterical rocking and rolling and the general political apathy of mod-ern-day patriotism. To those who scorn Combat 18 I will ask: Where is your alternative? Why do you condemn violence, terrorism and revolution while at the same time praising and even glorifying the Order? […] C18 must act as the armed wing of the Blood & Honour movement. By "armed" I do not necessarily mean piling up heaps of guns and grenades. Some people are into this, and I would be a liar if I told you that I'd cry if some obnoxious ZOG creature got a metallic addition between his or her big ears […] Personally, with "armed wing" I rather had in mind the ARMY of the Blood & Honour. There are many ways of spreading fear and terror among the enemy. Intimidation, threats, and beatings have worked well for the Red bastards for years and years. Don't you think its pay back time is long overdue? Civil servants, politicians, and journalists are just people, mostly without any real interest in "fascism". When they sabotage us, they do it because they hope that it will make them popular with heir masters. It’s just an ordinary day's work in the big ZOG machinery. But how much fun is this work when there are dark, sinister and severely unpleasant consequences attached to it?

Alsbrook is arguably among a small handful of Americans — along with Jon Pressley, of North Carolina; Kevin Kislingbury, of Ohio; Josh “Hachet” Steever, of New Jersey; and Brian “Scorch” Haizlip, of Virginia and North Carolina — who have done more than any others in this country to spread Combat 18’s mythos and message. Alsbrook’s involvement with NS88 and ISD Records, the label formerly run by the infamous Will “The Beast” Browning, of England, only cements such an argument.

Alsbrook’s story about a stolen wallet cannot explain away the photograph above.

Nor does it explain the fact that he appeared in the 2005 documentary, White Terror (around the 38-minute mark). At one point, Alsbrook is filmed video chatting with “Jäsä,” during which he is typing out a sentence about “my part in NS88 videos.” At another point Alsbrook appears wearing the trademark B&H t-shirt and discussing the extinction of the white race (below).

Another photo (below) from the B&H manifesto shows a masked man clad in the C18-Terror Machine t-shirt presenting a M16/AR-15 variant assault rifle. Alsbrook’s tattoos, visible in the White Terror video, seem to mirror those of the man in the photograph. 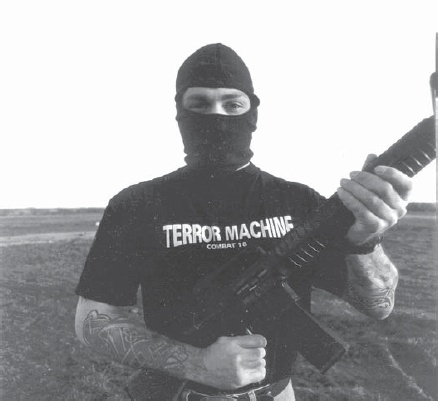 KVII’s Knapp reported in a follow-up story on Monday that Colbert’s city council isn’t planning on firing Alsbrook, even after he has offered to resign.

Knapp quoted city spokesman Jerry Harrell as saying, “They [the city council] don’t want him to leave because he hasn’t done anything they would warrant as grounds for dismissal.”

Harrell doubled-down to another local news channel late Monday night, saying, "From the research they did on him, he's qualified.”