Last week a Florida League of the South (FL LOS) member named Christopher Rey Monzon was arrested in Hollywood, Florida after attempting to assault hecklers at a government building where Monzon was protesting.

Last week a Florida League of the South (FL LOS) member named Christopher Rey Monzon was arrested in Hollywood, Florida after attempting to assault hecklers at a government building where Monzon was protesting. A survey of Monzon’s social media accounts reveals the ways in which League of the South leadership, particularly president Michael Hill and chief of staff and Florida state chairman Michael Tubbs, have selectively encouraged the more violent impulses of their younger membership as part of their drive to make the Florida League the “tip of the spear” driving towards a second Southern secession.

While it is unclear how a Cuban American came to identify as a white supremacist and “southern nationalist,” it seems apparent that Monzon received some encouragement from his parents, who have participated in League of the South demonstrations, decked out in Confederate battle flags (CBFs) and toting LOS signs.

Monzon, previously identified by Hatewatch by his preferred online pseudonym “Chris Cedeno,” is a 22-year-old native of Hialeah, Florida. Monzon frequently posts updates regarding his activities as a “lone leaguer” in the greater-Miami area, typically picketing outside of various federal buildings with signs decrying “Yankee foreign invaders.” 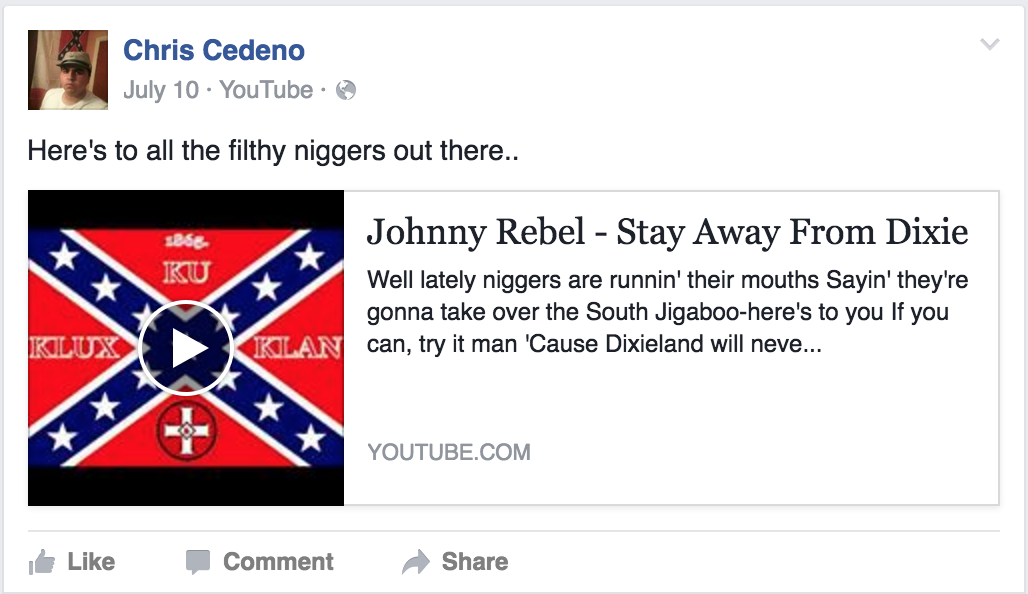 On Wednesday, August 30, one of Monzon’s solo protests went awry. Monzon was outside of Hollywood, Florida’s City Hall during a meeting of the city commissioners, who voted to rename three streets honoring generals of the Confederate States of America (CSA). Monzon allegedly engaged in a verbal altercation with the demonstrators, shouting that they were “… a cancer on the face of the earth! All Jews are!” before rushing across two lines of police tape while jabbing with his flagpole.

“Come on motherf-----, come on!” witnesses say Cedeno screamed before being tackled to the ground by police.

Monzon’s arrest for aggravated assault, disorderly conduct, and inciting a riot last Wednesday is only surprising in that he has previously engaged in violence when surrounded by his comrades at protests.

Monzon was among the LOS members who flocked to New Orleans’ Lee Circle in May of this year to demonstrate a “show of force” in advance of the city’s decision to remove several Confederate monuments. Pre-emptively dubbed the “Battle of New Orleans,” the only “battle” occurred between the LOS and another right-wing activist dubbed “the C--- Knight,” who made an inexplicable attempt to convince a group of militant anti-American secessionists to abandon their CBFs and march with him under an American flag.

Monzon is visible in footage from the event wearing a green army helmet decorated with a LOS “Southern Nationalist” sticker. Bearing a metal flagpole, Monzon shouts at C--- Knight, proclaiming that he is “of the synagogue of Satan,” a reference to C--- Knight’s apparent Jewish heritage.

Things turned hot when C--- Knight attempted to shove through LOS members blocking his path to the base of the statue. Among those who leapt into action was Monzon, visible in the footage jabbing at C--- Knight with his flagpole while leaping forward.

Monzon’s use of a flagpole as a weapon in both instances is notable. The League of the South frequently carries flagpoles constructed of either wooden dowel material like the kind carried by Kyle “Based Stickman” Chapman, metal, or PVC.

This tactic has been used by the far right before, including at a Klu Klux Klan rally in Anaheim in February of 2016 where the ornamental tip of a flagpole was used to stab a counter protester.

Monzon, apparently enraged that C--- Knight ripped his flag from its pole during the exchange, emerged behind the man and cold cocked him in the side of the head, dropping him to the ground. Needless to say, C--- Knight’s Roman centurion chest plate did little to defend him from being blindsided by a blow to the face. Almost immediately, Monzon was escorted off of the scene by Michael Tubbs, Monzon’s chairman.

Monzon was later arrested and spent the rest of the weekend in jail. A judge dismissed the charges against him for his role in the scuffle the following Monday. A profile apparently belonging to Monzon bragged about his role and was in turn lauded by LOS president Michael Hill and other members. 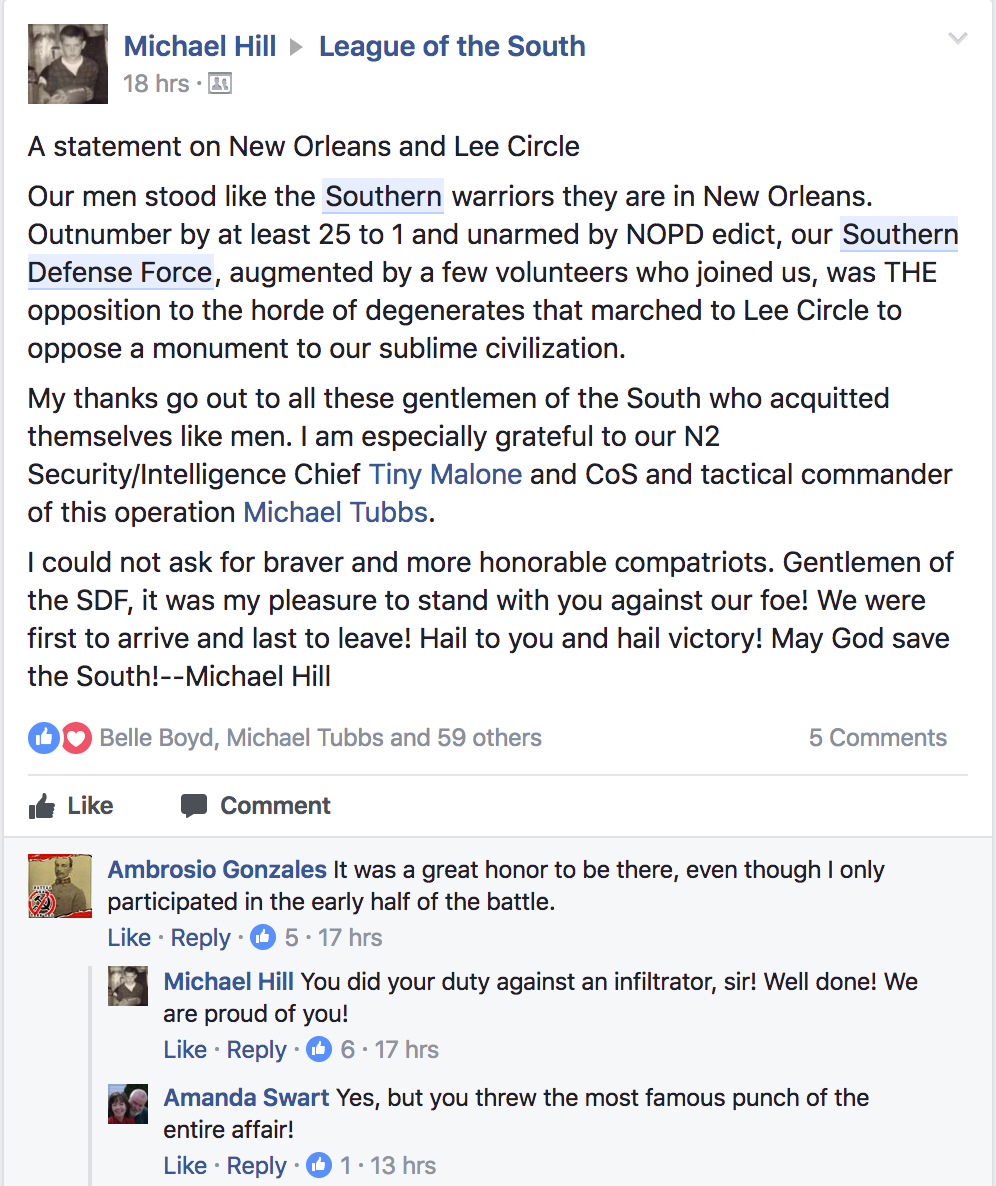 Undeterred by this brush with the law, Monzon was present with the LOS in Charlottesville on August 12, where LOS members were filmed assaulting several people. One widely-shared video shows FL LOS chairman Michael Tubbs standing by while members of his contingent viciously beat a black man named Deandre Harris.

Monzon has apparently shuttered most of his various “sock puppet” accounts since his most recent legal woes began in earnest. Nevertheless, a wealth of posts from his social media profiles have been made available to Hatewatch.

Monzon/Cedeno has apparently deeply immersed himself in the online “manosphere,” a term for a group of chauvinistic, misogynistic blogs, forums and profiles that decry efforts to secure equal representation for women in society. 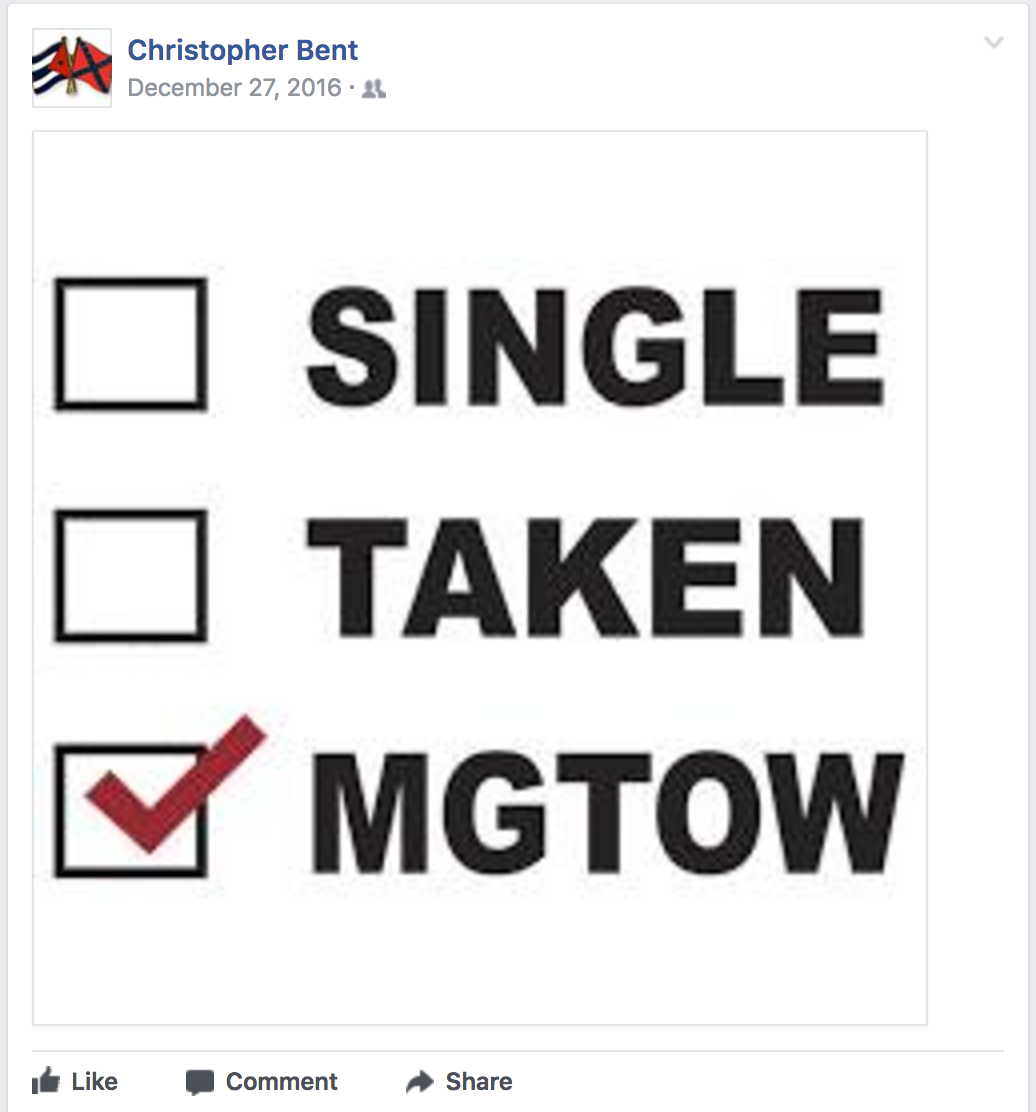 The acronym “MGTOW,” or “men going their own way” is frequently used to refer to “manosphere” adherents who have completely rejected any relationship with women, whether sexual, marital or financial. 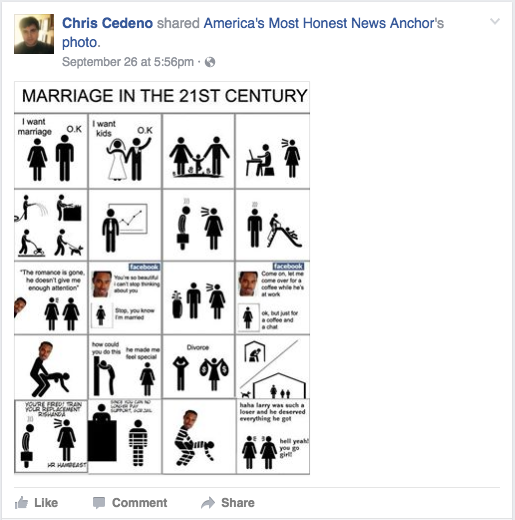 Monzon’s life under the avatar of “Chris Cedeno,” — the name he identified with online while using profiles like “Ambrosio Gonzalez” and “Christopher Bent” and “irl” at various protests — was clearly developed by a lonely, alienated and disaffected young man who found his insecurities and frustrations about his race, gender and sexuality readily assuaged by Hill, Tubbs, and other LOS members. While affirming the bigoted and misogynistic material that Monzon was regularly consuming online, they sought to further shape Cedeno’s radicalization as it emerged into the real world. 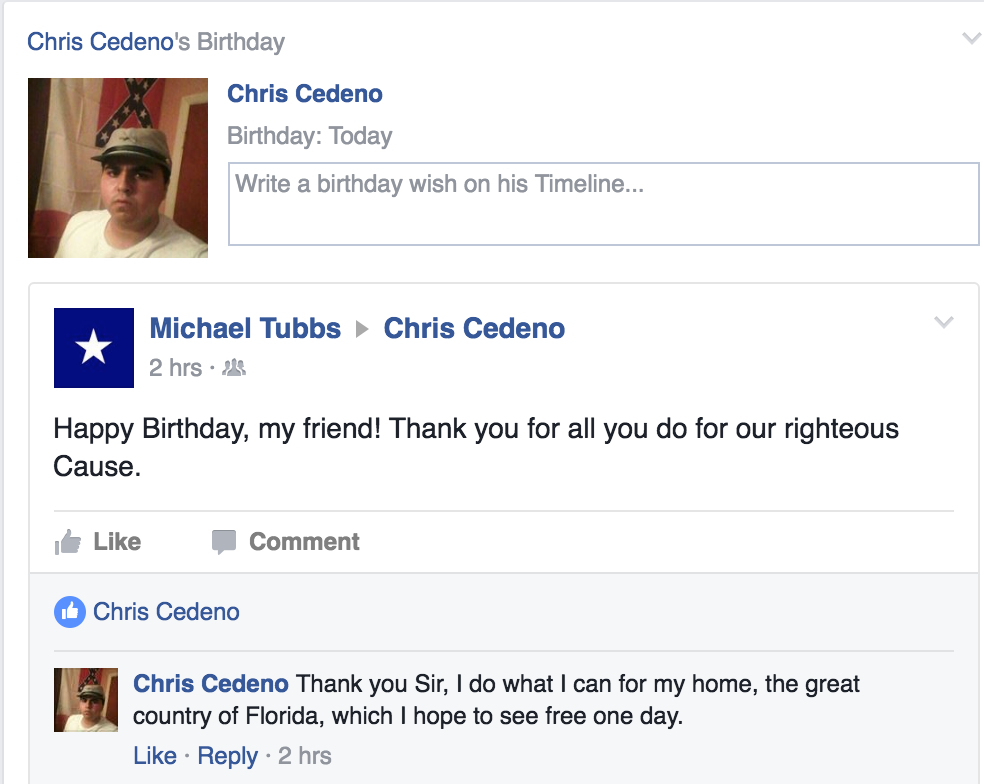 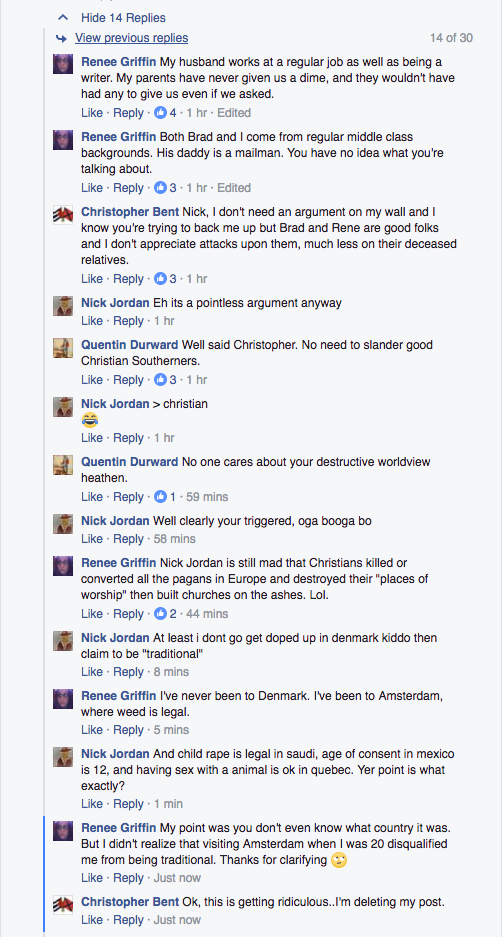 Brad Griffin, the LOS “PR Chief” appears to be close with Monzon, who stood up for Griffin’s wife in a Facebook post criticizing her for having smoked marijuana.

In exchange for his work as a “lone leaguer” and his “heroic actions” in New Orleans, Cedeno/Monzon was lauded by LOS leadership like Hill and Tubbs. After an incident previously documented by Hatewatch, wherein a non-LOS member pointed out the glaring contradiction that a brown-skinned white supremacist represents to any far-right organization, several of the LOS brass rushed to Monzon/Cedeno’s defense.

Cedeno/Monzon later expressed his gratitude to Hill, Tubbs and Griffin for their support. 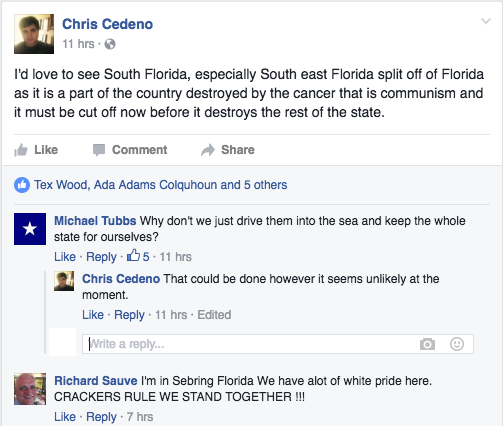 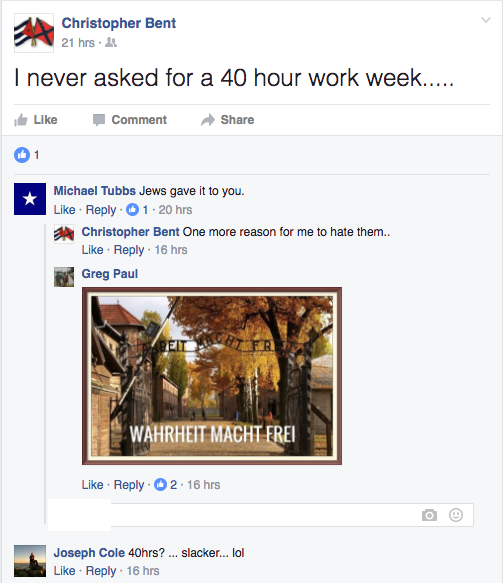 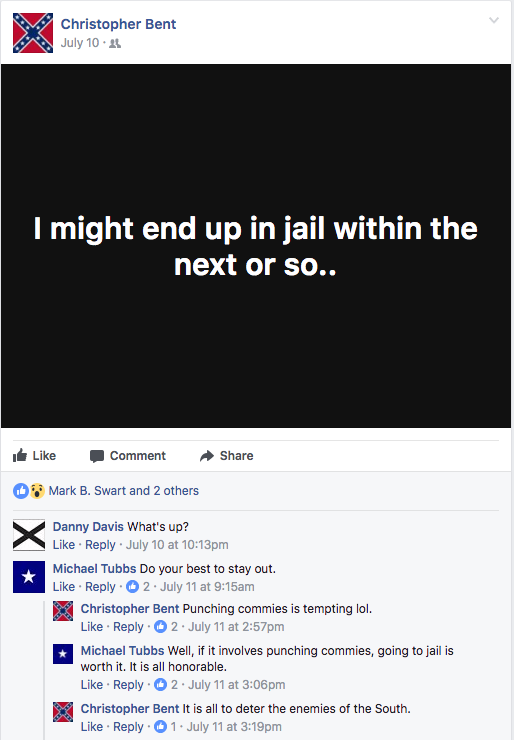 In a post unrelated to Monzon’s most recent legal trouble, Tubbs advised Monzon that going to jail “is worth it … if it involves punching commies.”

Hill and Tubbs have not commented publicly on Monzon’s arrest. While Monzon’s age clearly puts responsibility for his actions last week solely into his own hands, the tactics used by Hill, Tubbs and other LOS leaders to groom him and to encourage him to act violently should be documented as the LOS continues to try and recruit more angry young men into their ranks.