Pickup bearing Confederate, American flags barrels through crowd, but no one is injured, while 'Patriots' claim their opponents are the source of violence.

VANCOUVER, Wash.—Joey Gibson and his Patriot Prayer organization may have a problem: He keeps trying to depict the anarchists and antifascists who show up to oppose his far-right rallies as the sources of the violence that surround them. But once again Sunday, participants from Gibson’s side at a rally here wound up in trouble for posing a lethal threat to their opponents.

By the day’s end, at least one “Patriot” had driven his large black pickup around a crowd of black-clad protesters and then driven it in reverse at high speed through the same crowd. Fortunately, no one was hit by the truck; the driver was briefly detained by police and released. 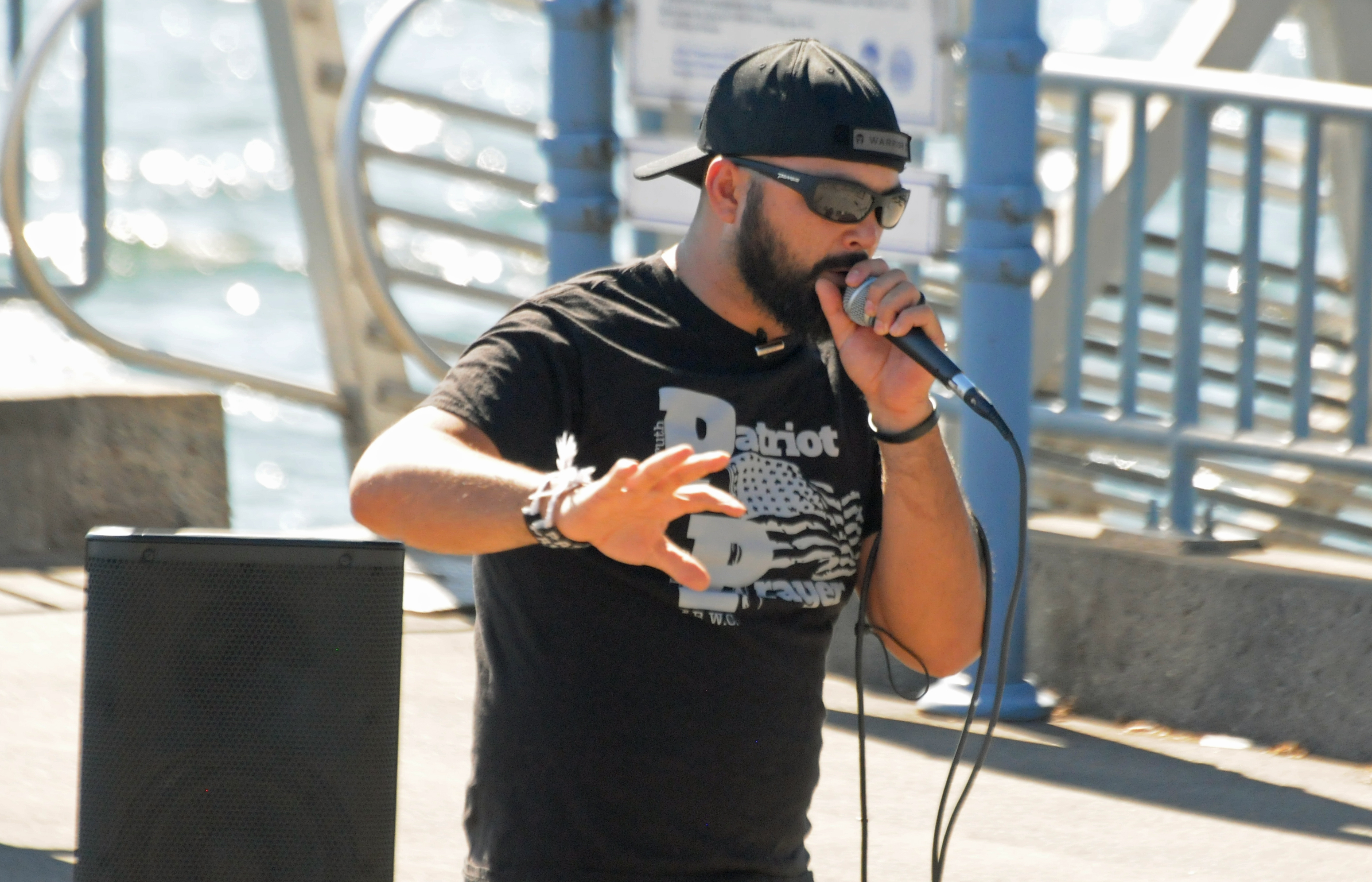 Calling it a “Peaceful March for Freedom,” Gibson organized the latest of his West Coast far-right rallies in somewhat friendlier territory than his usual attempts to provoke left-wing violence in heavily liberal cities. Although Vancouver is only across the Columbia River from Portland, Ore., it has a history of voting conservatively, and is also known as the home of several antigovernment “Patriot” groups. 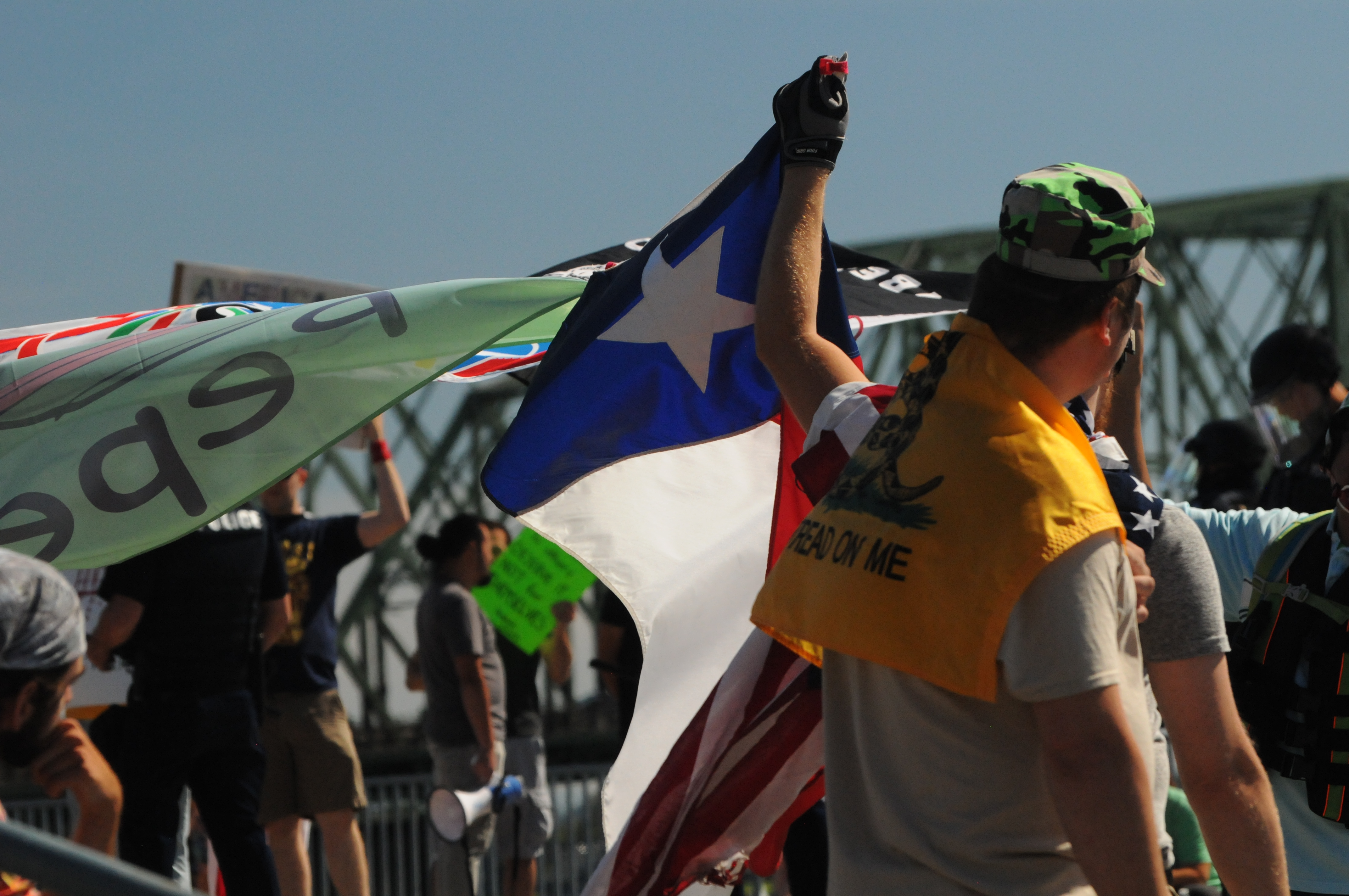 The 'Patriot' supporters brought an array of flags to the rally. Photo by David Neiwert.

Sunday’s event was at a riverfront park amphitheater in downtown Vancouver. And for most of the afternoon, Gibson’s biggest problem was that his continually declining crowd of supporters – which numbered less than a hundred – was so heavily outnumbered, once again, by the gathering of several hundred counter-protesters who came out to shout their disapproval.

The protesters arrived at the park just as Gibson’s event was scheduled to begin. A long line of Vancouver police in riot gear formed a barrier between them and the Patriot Prayer supporters, keeping them contained on a plaza above the amphitheater.

Before the Vancouver event, however, a number of anti-racist and left-wing groups held a collection of rallies in downtown Portland that attracted hundreds of supporters. And as is often the case, a small clutch of about seven Patriot Prayer supporters showed up in the apparent hope they could inspire violent attacks from their opponents on the left.

Portland police arrested seven people at those rallies, all left-wing supporters of the anti-racist rallies, on a variety of charges, mostly for interfering with a police officer and resisting arrest. 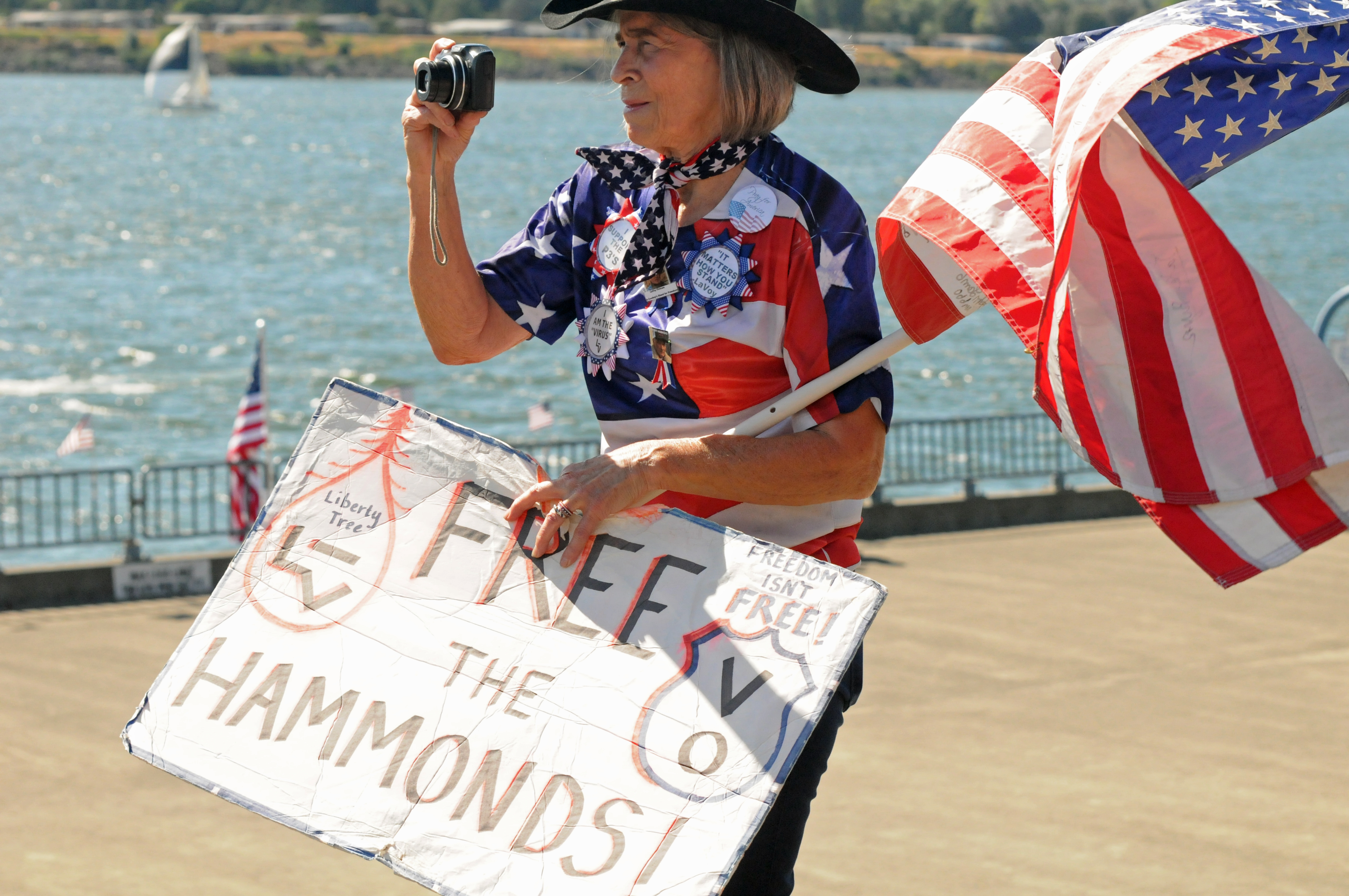 A Cliven Bundy supporter at the rally. Photo by David Neiwert.

In Vancouver, Gibson offered his thoughts to his gathering of supporters, telling them the counter-protesters were simply “misguided,” while he and his rallygoers were all about freedom of speech and “love and peace.”

He also explained his own background, telling the audience that he came from an upbringing as a “constitutionalist,” and that eventually he became a “prepper,” because he expected society to collapse at any moment. But he decided to take action, he said, after attending a Donald Trump rally in San Jose, Calif., in 2016 and encountering violent opposition.

A number of speakers came up to address the audience through the public-address system, all of them repeating Gibson’s themes. Meanwhile, the crowd of counter-protesters kept up a steady level of noise from chants and shouting. 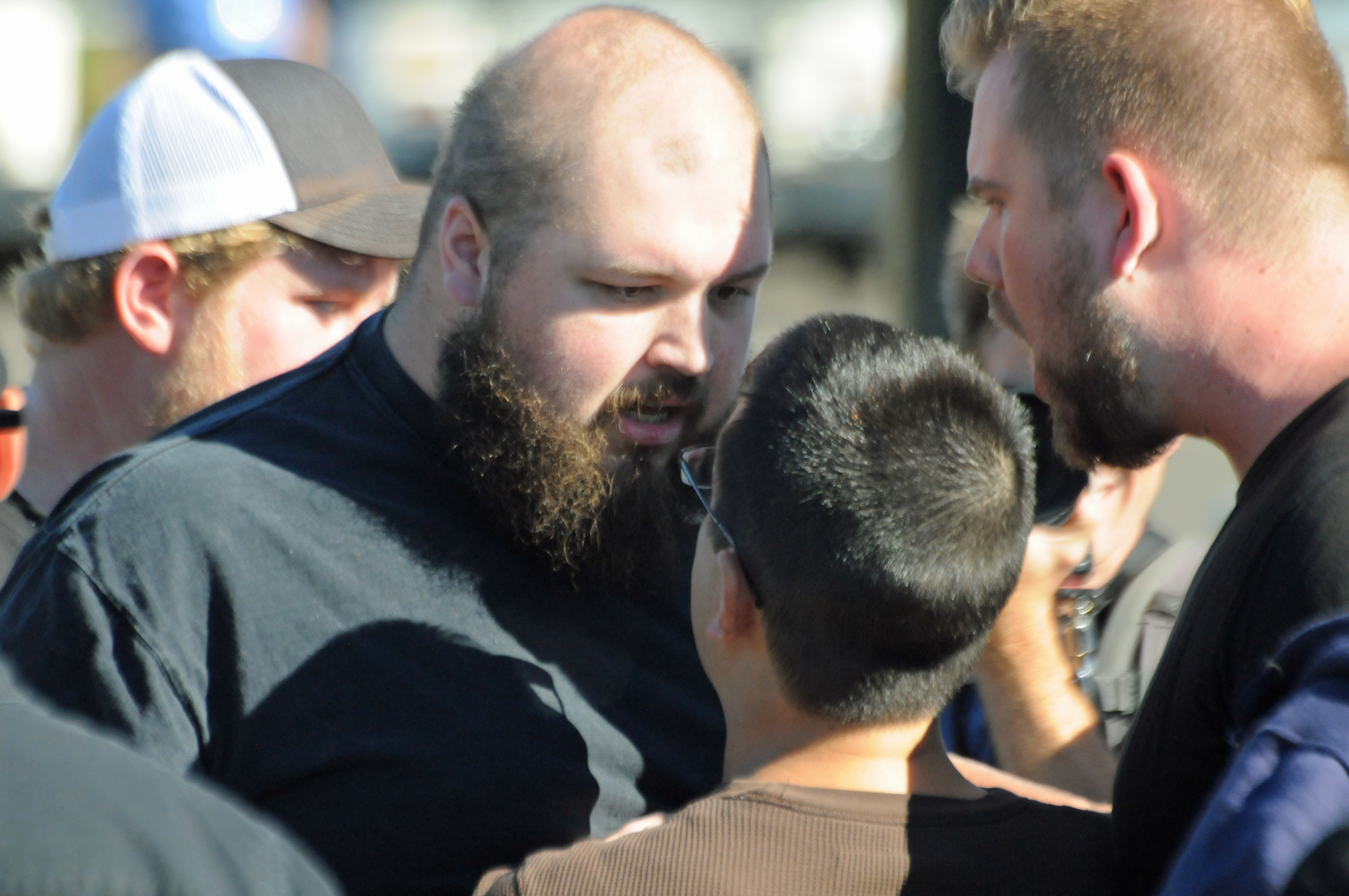 A 'Patriot Prayer' supporter, left, faces off with a counter-protester while returning to his car after the rally. Photo by David Neiwert.

The trouble began brewing after the speeches were over and the “Patriots” began leaving. They were met by the crowd of protesters, and several groups of black-clad anarchists began following some of them as they returned to their cars.

One young skinhead and a helmeted companion who had attended the rally walked boldly up the sidewalk past the black-bloc faction, who then began following them down the street. Several brawls erupted as the group moved down the street and toward Vancouver’s downtown.

Eventually, the entire collection of protesters had marched into the downtown area, some of them following “Patriots” returning to their cars. It was into this scene that the man with the black pickup, which sported both American and Confederate flags, tried driving around the crowd, then drove in reverse at high speed back through them.

“And they call us the violent ones!” they shouted at a couple seated outside a Starbucks near the city park.