The leader of the Fundamentalist Church of the Latter Day Saints (FLDS) pleaded guilty Wednesday in U.S. District Court in Salt Lake City to separate counts of federal food stamp fraud and failing to appear in court. He was a federal fugitive for more than a year after using olive oil to slip out of an ankle-monitoring bracelet.

After his guilty pleas, John Huber, the U.S. Attorney for Utah, told reporters that prosecutors will recommend that Jeffs personally repay $1 million and serve five-years in prison when he’s sentenced in December.

A federal indictment alleged Jeffs and 10 other FLDS members of his racist polygamous religious sect illegally used federal food stamp cards to convert food stamp purchases to cash that went into the church’s coffers. The group’s main community, Short Creek, is comprised of the adjoining communities of Hildale, Utah, and Colorado City, Arizona.

“This case made a significant impact on the United States government, and also upon that community in the Short Creek area,” the U.S. attorney said, according to the Desert News.

Under a plea deal, a third count alleging money laundering will be dismissed by the government, but Jeffs will be personally responsible for the $1 million in restitution.

“This is a personal obligation for Lyle Jeffs, $1 million on the hook,” Huber told the Salt Lake City newspaper. “Now, whether we can get $1 million out of him is another story,” he said.

“We're not out to punish people of faith, people with sincere religiously held beliefs," the federal prosecutor said. “We're out to punish fraudsters."

Jeffs reportedly was penniless when he was arrested June 14 in Yankston, South Dakota, where he attempted to pawn two Leatherman tools for $35, triggering suspicion.

His brother, Warren Jeffs, is in deteriorating health, serving a life-term in Texas for child rape, but still reportedly plays a leadership role in the FLDS sect. 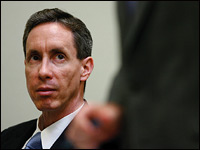 Since 2005, the FLDS sect and its child bride, arranged marriages, has been listed as a hate group by SPLC because of its anti-black, homophobic and antigovernment views.

The FLDS is a breakaway from today’s modern Mormons, the Church of Jesus Christ of Latter-Saints, which abandoned polygamy or “plural marriage”  years ago and has “nothing whatsoever to do with this polygamous sect.”