One, the ambitiously-titled Mother of all Rallies (MOAR) was billed as an appeal for the preservation of “traditional American culture” and a celebration of Donald Trump’s “America First" agenda. The other was the Juggalo March comprised of fans of the hip hop/rock group Insane Clown Posse (ICP), whose music and productions are themed around a “Dark Carnival” full of killer clowns. Juggalos and their supporters were marching in opposition to a 2011 FBI determination that described Juggalos as a “loosely organized hybrid gang.”

The MOAR Rally was supposed to be the “Woodstock of American Rallies’ with thousands in attendance, based on the amount of people who RSVP’d for the event and the hype behind it. Instead, only a couple hundred people actually showed up.  MOAR was dwarfed by the Juggalo March happening farther down the mall, which drew around 2,000 fans from across the country.

Prior to the event, MOAR organizer Tommy Gunn — aka The Pissed Off American — made it clear that no violence or misbehavior would be tolerated with the following disclaimer:

This is a peaceful rally.  Please do not litter, vandalize or anything else illegal or unbefitting.  Act worthy of yourselves.  Any violators will be asked to leave or turned over to authorities.  If your intentions are other than peaceful, this is not the event for you.

Among the attendees were American Guard members from multiple states, Proud Boys including Based Stickman Kyle Chapman, Oath Keepers and other Three Percenters. Some looked as if they hadn’t read the fine print and were ready for a fight. If so, they were disappointed.

There were a couple of verbal skirmishes between the attendees and the opposition outside the event. At one point a female antifa tried to shout down a speaker who claimed to be a Trump-supporting anarchist, telling anyone who would listen that he wasn’t a real anarchist and should renounce his circle A. Attendees started a grade school like chant around her, then she was escorted from the area.

In the afternoon, Black Lives Matter activists from New York made an appearance and were invited onto the stage by a speaker to “show them what patriotism is.” Yet when the group asked if they could address the crowd they were told to leave. The crowd reacted with a fervor, chanting “All Lives Matter!” at the activists. One speaker, Outlaw Morgan, described the crowd as “foaming at the mouth as if they had rabies.” Gunn jumped in and let BLM have their say, after reminding people that the rally was about freedom of speech and celebration. 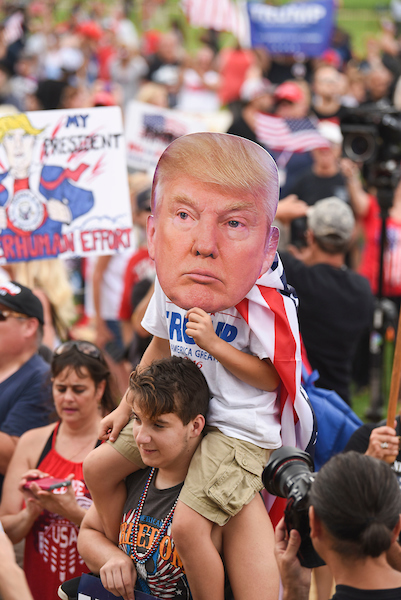 The celebration portion mainly consisted of an Oath Keeper dressed as Captain America and musical performances by Madison Rising, who bill themselves as America’s “Most patriotic” rock band, and rapper Jeremy Herrell, whose songs include “MAGA Like a Mofo” and “Build a Wall.” There was also an impromptu performance by a young girl who belted out Rachel Platten’s “Fight Song,” —which coincidentally was Hillary Clinton’s campaign theme song. — while the crowd of middle-aged Trump supporters sang and danced their hearts out.

The younger American Guard members may have felt that it wasn’t their scene and made their way over to the Juggalo March where they stood at the perimeter, almost behind the brush near police and a group of antifa. From their vantage point they would have seen the Insane Clown Posse do something the MOAR rally failed to do, which was denounce bigotry in all its forms, with a call-back chorus of fans agreeing, using the standard Juggalo cry of “Woop! Woop!”