Betrayed. That’s how the owner of an Arkansas restaurant describes herself after a group of white supremacists and neo-Nazis used her café for a secret weekend meeting.

Dawnel Verkler, who owns the Mean Bean Café in Conway, Arkansas, said she had no idea that long-time racist Billy Roper and his associates would be eating hamburgers and discussing their racist views in the restaurant she’s owned for seven years. 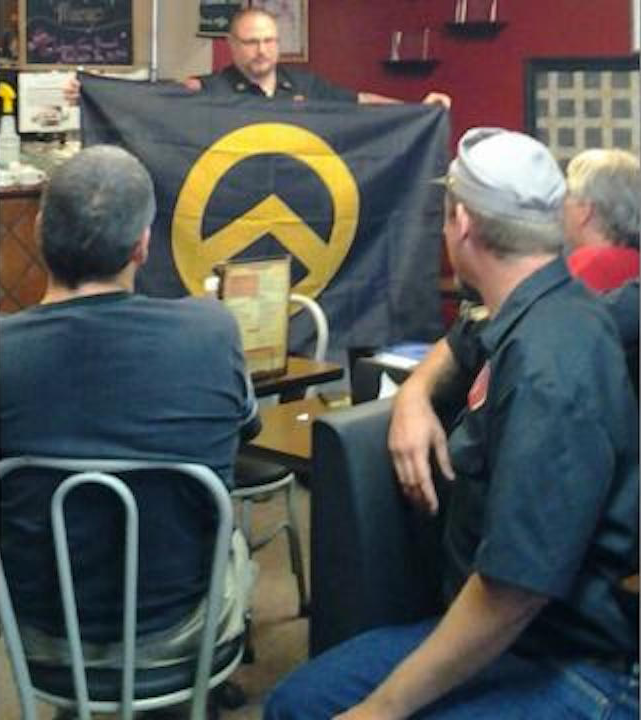 Billy Roper at the Mean Bean in Conway, Arkansas.

In an interview with Hatewatch, Verkler said she took Saturday off to be with her family after the recent death of her mother-in-law.

The restaurant’s lead cook and general manager, identified in social media posts as Kenneth Ellis, previously had asked Verkler if he could use the facility, closed to the public that day, “for a political meeting of a conservative group,” and she agreed.

“He led me to believe this was a little Republican powwow he was putting together,” Verkler said.

So, she said, she was surprised, startled and disgusted Sunday “when my phone started blowing up” with messages that the “Mean Bean” had been used by neo-Nazis and white supremacists posing for pictures with racist flags.The photos were widely posted on social media, apparently after they were obtained by anti-racist activists.

“I was blind-sided by this,” Verkler told Hatewatch. “He wasn’t just an employee. He was someone I’d built a trust with for a year and a half. I was lied to, I was betrayed.”

Verkler said she has no idea exactly how many people attended the “well-orchestrated event,” but said she has learned some attendees “flew in and were vetted off site” before being driven to the secret restaurant location.

Upon learning of the event, Verkler said she immediately fired Ellis, whom she otherwise described as a “great employee.” He left behind $240 in cash that he collected from hamburgers he cooked and sold to the racists.

Later, on social media, he admitted deceiving his former employer.

“I did it,” Ellis said in a post. “I lied to the owner about the reason I wanted to rent the place. She trusted me and I deceived her. She had nothing to do with what happened.”

After the event, Roper boasted on his blog that “Arkansas anti-whites [had been] fooled again” by his “subterfuge and misrepresentation.”

Roper said the event was a gathering of supporters of his “ShieldWall Network,” which he describes as a “locally-focused, grassroots endeavor” without membership fees or dues, only a “commitment” to his racist views.

“Although we look forward to the time when anti-free speech censorship will be overcome, and renewed freedom will allow us to gather without the need for subterfuge or misrepresentation, for this meeting we did perhaps misrepresent ourselves to the business employee with whom we had spoken to arrange the meeting,” Roper said on his blog.

Verkler said she’d never heard of Roper, who once unsuccessfully ran for governor of Arkansas. The café owner said she “would never associate with these hateful groups. I’m anti-violence, anti-hate.”

“Hate begets hate,” she said. “That’s what this meeting was all about.”