That accusation managed to get past the editors of a magazine that has published hundreds of articles ridiculing safe spaces — not to mention an editor who has consistently knocked down the right-wing’s outrageous insistence that the Family Research Council shooting was “incited” by the SPLC. The debate that led Whelan to this accusation relates to the facts of a case where the international arm of Alliance Defending Freedom (ADF) intervened, a group Whelan said he was “pleased” to work with on matters of common interest.

Whelan had previously defended the ADF’s role in a case before the European Court of Human Rights (ECtHR), which ruled that requiring transgender citizens to undergo sterilization or surgery that leads to sterilization before accessing documents that reflected their gender identity violated the European Convention on Human Rights. Whelan defended ADF and their intervention because Senator Al Franken (D-MN) had the nerve to bring up ADF’s record during the Senate confirmation hearing for United States Circuit Judge nominee Amy Coney Barrett, who had once spoken to an ADF-affiliated group.

ADF’s involvement in the sterilization case — an amicus brief filed by their international arm arguing that the court should not rule in the case — reveals an ugly part of their mission and one reason the SPLC listed the group as an anti-LGBT hate group; why intervene in this case unless your concern is the advancement of transgender rights? This case is particularly revealing because nowhere in their brief did ADF argue that the ECtHR would be encroaching on religious liberty, ADF’s alleged raison d'être, by taking up sterilization laws.

In a clarification that went up hours after publishing his response Whelan had something of a breakthrough:

It may in fact be that some of the legal regimes that SPLC objects to condition (or conditioned) the documentary change of sex on actual sterilization alone.

The “state-enforced sterilization” which Whelan calls a “confusing and inflammatory shorthand” for sex-reassignment surgery is in fact literally how the Council of Europe’s Commissioner for Human Rights described these legal regimes in 2009, and encompasses both “actual sterilization alone” and gender-reassignment surgery that leads to sterilization. Many of the laws are vague about procedure but their purpose is clear; for instance, a transgender person seeking legal recognition in Finland must prove that they are “for some other reason infertile.”

Whelan insists that for a transgender person, deciding between undergoing an invasive and irreversible procedure or acquiring government documents that accurately reflect their gender identity and are used in every day life is a choice. However advocates for equality, including the SPLC, see that that choice as illusory, with which the ECtHR agreed. Again, not all people who identify as transgender want to or can afford to undergo gender-reassignment surgery.

Further, there’s no question that these laws are considered sterilization laws, which Whelan wants to believe is a dysphemism. Here’s The New York Times headline after the ECtHR ruled that sterilization requirements violated human rights: 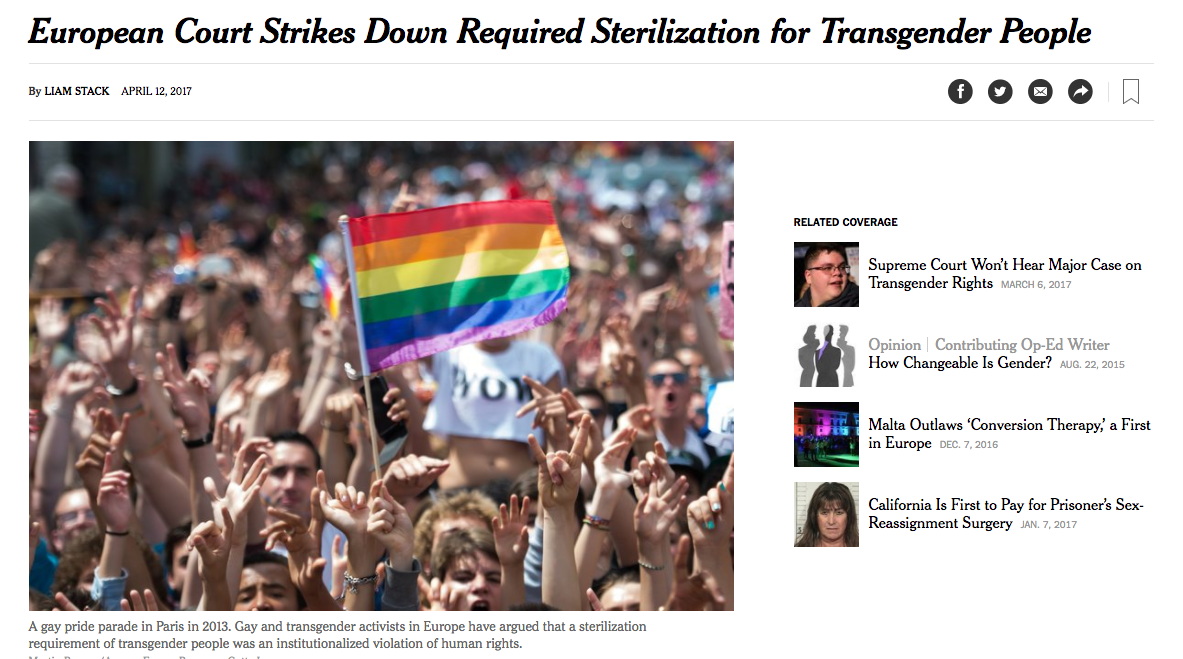 (You can read the original post on this case to see the many different international human rights organizations discuss state-enforced sterilization laws.)

Here are the facts: ADF intervened in a case before the ECtHR on transgender sterilization laws, which the court found to be in violation of human rights. Whelan dove headlong into defending ADF and their intervention in this case, something the ADF was smart enough to avoid completely in their statement on the Barrett hearing, without fully understanding the laws in question. One ADF spokesperson has now said that ADF “would never condone government-compelled sterilization,” which is obviously false or makes meaningless their intervention in the ECtHR.

In Whelan’s update he now says that he “can’t and don’t speak for ADF,” which is a much different note than the one sounded in his original post .

Whelan aside, ADF’s intervention in this case has been little reported on, and is part of the reason the SPLC has listed ADF as an anti-LGBT hate group. Scratch the surface some more, and you’ll see ADF’s full record abroad is just as ugly.