A group of conservative African American clergy held a press conference October 23 on the steps of the Supreme Court building in Washington, D.C., to launch a campaign in support of an anti-LGBT hate group’s pending legal case before the Supreme Court.

Their message? LGBT people are “hijacking” the civil rights movement.

According to Deseret News, the Rev. William Avon Keen of the Southern Christian Leadership Conference (SCLC) of Virginia told reporters that the civil rights movement’s efforts to gain equal facilities for health care and education are not equivalent to a gay couple’s wedding cake request and that “Christians should not be forced to support sin.”

Keen was referring to the case Masterpiece Cakeshop, Ltd. V. Colorado Civil Rights Commission, which is scheduled to be heard before the Supreme Court December 5.

Colorado baker Jack Phillips, who has become a cause célèbre for the Christian Right, refused to create a wedding cake for a gay couple, citing his Christian religious beliefs. The Colorado Civil Rights Commission determined in 2013 that Phillips’ refusal to sell the gay couple a wedding cake constituted discrimination on the basis of sexual orientation, a violation of Colorado law.

Phillips’ attorneys are with the anti-LGBT hate group Alliance Defending Freedom, which is arguing that Phillips’ “religious liberty” and free speech rights are violated by Colorado’s anti-discrimination ordinance.

ADF has supported the recriminalization of homosexual sex and also intervened to defend state-enforced sterilization of trans people abroad. ADF has also linked homosexuality to pedophilia and works to develop religious exemption laws to legalize discrimination against LGBT people. 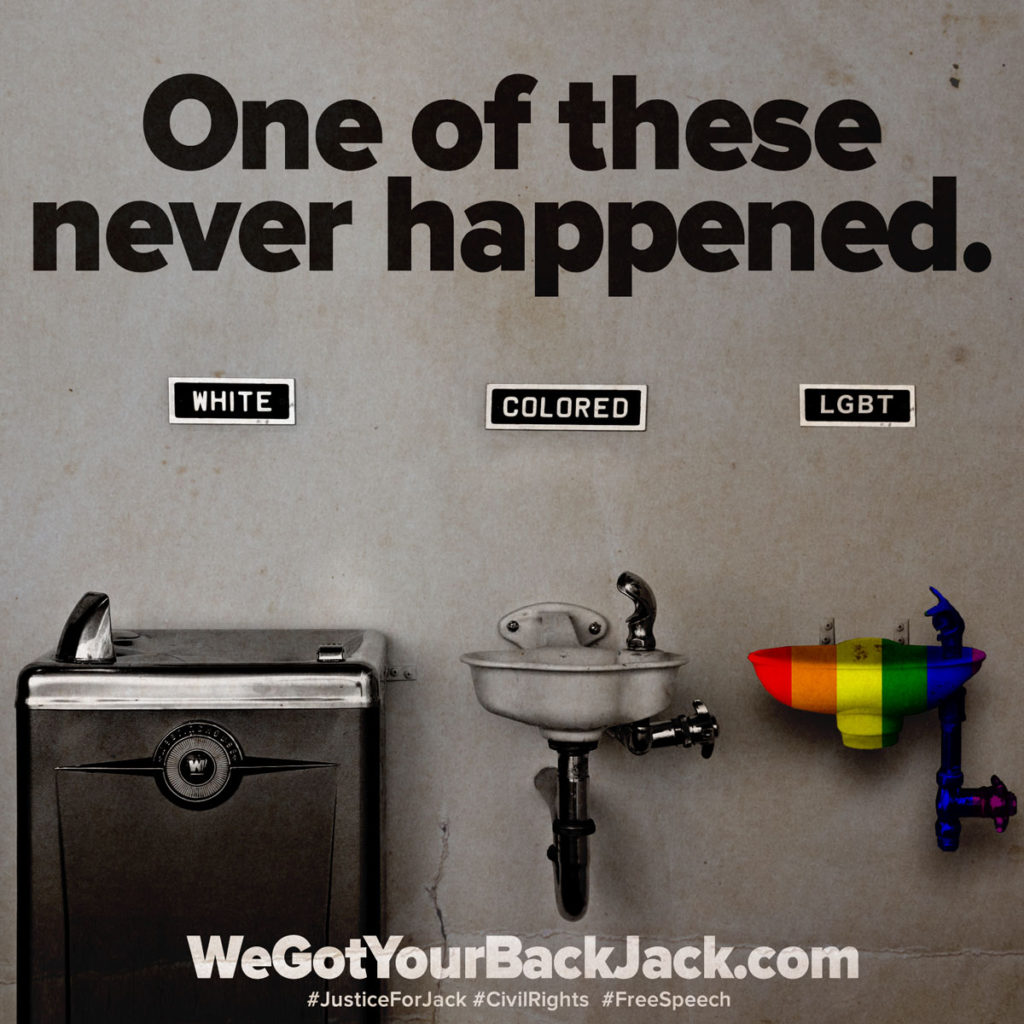 A meme created for the campaign.

This campaign in support of Phillips includes a website (wegotyourbackjack.com) and a Twitter hashtag of the same name. The website includes videos that attempt to draw distinctions between the struggle for African American civil rights in the 1960s and LGBT rights today, and accuses LGBT people of comparing themselves to African Americans as they work for equality.

Rev. Dean Nelson, chairman of the conservative Frederick Douglass Foundation (which sponsored the press conference) said in the Deseret News that the purpose of the campaign is to support Jack Phillips “and all people of faith and conscience who simply want to live their lives, who simply want the right to life, liberty and the pursuit of happiness.”

Nelson is also a senior fellow at the anti-LGBT hate group Family Research Council, who advertised the press conference on their website, noting that in addition to Nelson, FRCAction’s Patrina Mosley spoke.

In January, Nelson was involved in another press conference with black pastors through FRC in support of President Trump’s nominee for attorney general, former Alabama senator Jeff Sessions. Allegations of racism have trailed Sessions throughout his career. He was denied an appointment as a federal judge in 1986 on the basis of racially charged comments, though Sessions himself denies the allegations.

Tony Perkins, FRC’s president, also addressed the Louisiana state chapter of the white nationalist Council of Conservative Citizens in 2001 when he was a Louisiana state representative, two years after media attention and then-national RNC chairman Jim Nicholson urged all Republicans belonging to the group to quit.

Perkins also managed the 1996 U.S. senate campaign of Woody Jenkins, and was involved in the purchase of robocall services through Klansman David Duke’s Impact Mail & Printing. The Federal Election Commission fined the campaign for fraud because Jenkins ordered Perkins to pay Duke through his campaign’s media firm in an attempt to avoid being associated with Duke’s company.

FRC claimed in its announcement of the press conference that Nelson had said that if anyone could understand what African Americans went through during the Civil Rights era, it’s Jack Phillips (who is white). Nelson was then quoted as saying

To be honest, if I think about it deeply, he is probably a modern representation of someone who went through what African-Americans actually went through. He simply wants to live his life peaceably, to conduct himself and run his business without being bothered. But yet, he is subjugated and ostracized simply because of what he believes. If [more people] knew his story, [they] would understand that he is the furthest thing [from prejudiced].

Both Deseret News and the National Catholic Reporter noted that the clergy launching the anti-LGBT campaign were joined by staffers from ADF and FRC as well as anti-LGBT and ex-gay activist Janet Boynes, who founded an ex-gay ministry in Minneapolis. Boynes stated that, “I resent having my race compared to what other people do in bed. There is no comparison. It only trivializes racial discrimination.”

Boynes has claimed that homosexuality is destructive, likened it to drug addiction and believes it’s caused by domineering mothers or hanging around with gay people.

The We Got Your Back Jack campaign website is sponsored by conservative anti-LGBT African American organizations the Frederick Douglass Foundation, the Radiance Foundation, and Urban Cure (CURE), which is helmed by conservative pundit Star Parker. CURE pushes Christian Right and Libertarian messaging, claiming that its objective is to build awareness of a conservative agenda of “traditional values, limited government and free markets” which is, according to CURE, “of the greatest marginal benefit to low-income Americans.”

Parker has referred to the impending legalization of marriage equality in Washington, D.C., as “Sodom in the nation’s capital,” saying it is our nation’s “sickest place,” and that acceptance of LGBT people is coincident with a general moral unraveling of society.

The Radiance Foundation, founded by anti-abortion activists Ryan and Bethany  Bomberger, bills itself as a “life-affirming organization to help people understand and embrace their God-given Purpose.” The organization is staunchly anti-Planned Parenthood, accusing that group of killing more black people than police. RF was sued by the NAACP for possible trademark violation after the RF referred to the NAACP as the “National Association for the Abortion of Colored People” in a headline. The Fourth Circuit Court ruled in RF’s favor.

Last year, in a blog about National Coming Out Day, the RF cited anti-LGBT junk science and such anti-LGBT pseudoscientific organizations as NARTH to claim that people can “leave” homosexuality and that “transgenderism” is a myth.

In 2012, internal strategy memos of the anti-LGBT group National Organization for Marriage were released that called for the use of race as a means to impede same-sex marriage. “The strategic goal of this project,” NOM said in the confidential memo, “is to drive a wedge between gays and blacks—two key Democratic constituencies.”

Blogger Alvin McEwan picked up on this latest campaign, noting that the website “exploits the history of African-Americans struggling for equality to diminish the fact that LGBTQs are doing the same thing” and states that it’s an attempt to “push the phony idea that the gay community is attempting to ‘equate their struggle to black people.’”

A Supreme Court ruling in favor of Phillips will have huge ramifications for LGBT people in the U.S. and may set precedent to allow business owners to use religion to discriminate and deny goods and services not only to LGBT people, but anyone with whom the owner took exception.